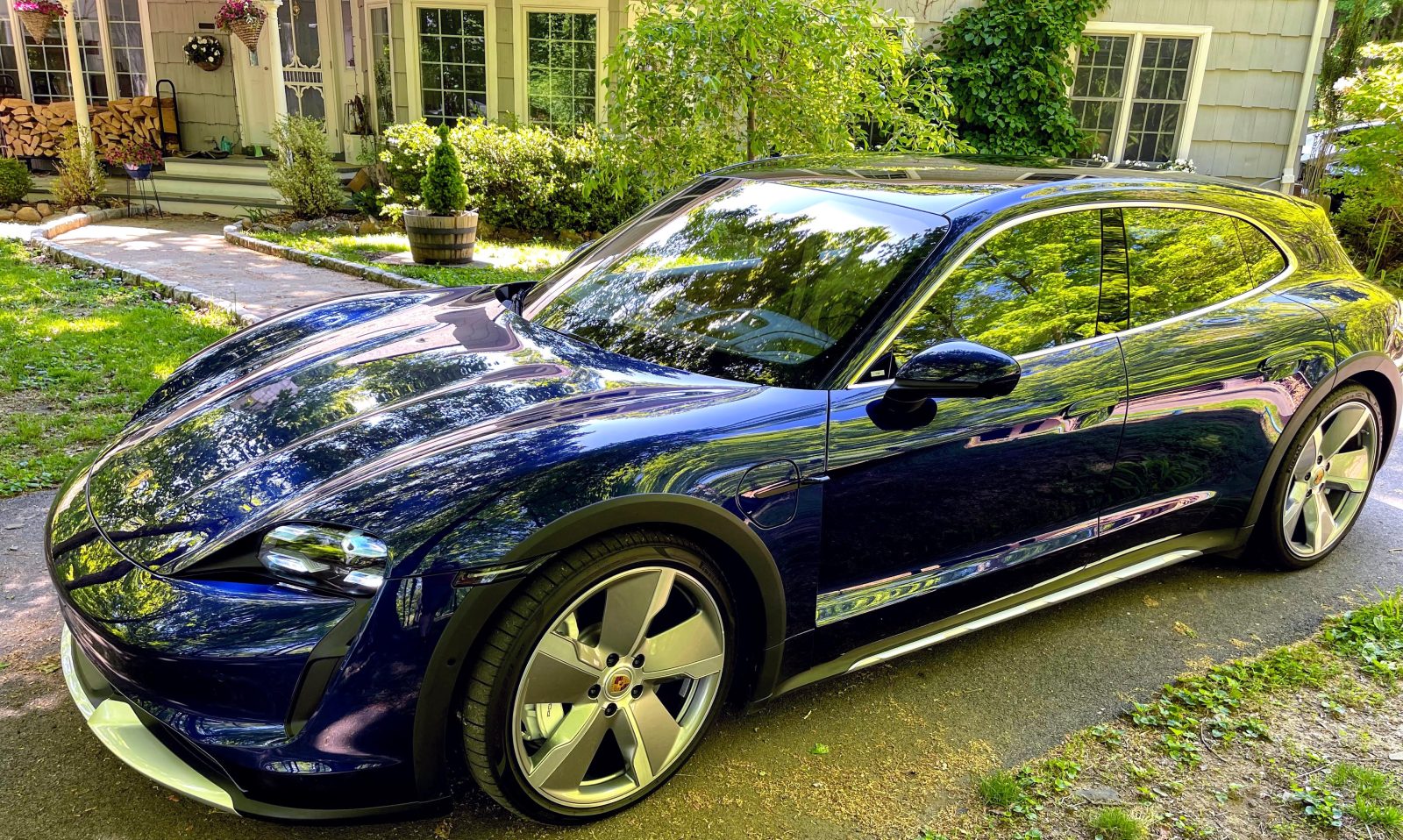 Porsche hooked us up with a gorgeous blue Taycan Cross Turismo ‘Turbo’ for the better part of 24 hours last week so we could get a feel of the lust-worthy variant of the popular Taycan EV. For a short time, I was the envy of the suburbs…

The Porsche Taycan Cross Turismo is the slightly “station-wagoned-out” version of the popular Taycan EV that we reviewed all the way back in January of 2020 (also Gentian blue, to the dismay of our stock art library). That one was again the ‘Turbo’ variety and took us from Daytona Beach, Florida, to Porsche’s US HQ in Atlanta, Georgia via Electrify America DC fast chargers. I was blown away by the handling and performance, calling it “the best Porsche ever.”

Then, the Cross Turismo variant came along.

Add some more rear headroom and capacity to that car, and let me take it off road? At the same time, barely touch the price tag? I think we have a new winner!

Probably the best $2,600 upgrade Porsche has ever offered.

The Cross Turismo is also dropping down from 161mph top speed to 155mph, so those Autobahn trips are going to feel like you are driving through molasses. There’s no official EPA range yet but I think there might be a surprise here. Porsche was famously conservative with the Taycan range, I think they will be less so with the Cross Turismo.

I should note here that this was the German pre-production version of the Taycan CT Turbo and the center stack was still very buggy. Also, Porsche told me I could take it on gravel roads, but this wasn’t really an “off road” vehicle. So I avoided the deep mud but did let loose on some nearby gravel roads.

There’s a gravel button on the bottom of the center stack, and it calls out to you when the roads get rough and turn to dirt. The gravel button, when activated (blue), raises the Taycan a few inches more off the ground and prepares the car for bigger bumps in the road and some AWD drifting.

The biggest issue is I don’t really have anything to compare it to. I’ve really never taken a Tesla off road, and everything I have taken off road is not even half as fast as this car.

It’s about as much fun as you can have as a grown ass man. The biggest issue from a photography standpoint is outrunning the Skydio drone. Also, all of your friends want to try it and really don’t want to stop.

Perhaps it felt a little sacreligious to get this gorgeous car dirty. But that’s what I’m paid to do!

How’d the Taycan CT Turbo do on regular roads? About as good as a car can do, frankly. Having just driven the Audi GT a few days earlier, it was useful to compare the two vehicles, which are based on the same platform. While the RS GT was more luxurious with softer but still crazy fast acceleration and suspension, the Taycan CT Turbo was way more sporty and stiff. Compared to a Tesla, the acceleration was similar, but the handling was worlds better.

This is the kind of car you can hit triple digits on the highway on-ramp if you aren’t careful. No one is beating you off the line unless you pull up next to a hypercar, Plaid Tesla or Turbo S. And driving on the highway? You are a man among men. It is like playing soccer with a bunch of 5-year-olds. You can play nice, but when someone goes too far, you can just take off like everyone else is standing still.

On my way to returning the Taycan in the morning, I could feel the soreness in my neck from all the launches and hard turning. I honestly felt a little borderline concussed the next day — like I had gone a few rounds in the boxing ring.

Too fast? 626 lb-ft of torque is a helluva drug

One thing that comes up when we are reviewing these top-end electric vehicles and will be even more prevalent when Tesla’s Plaid vehicles go below 2 seconds 0-60:

Are these electric cars too fast? Too dangerous for normal people? I’m not even talking about out of control driving and accidents.

Even if you are operating safely, I have to imagine that if my head was sore after a spirited day with this car, would I be doing some long-term CTE-like damage to my brain if I owned something like this? And this isn’t even the fastest Taycan. It is the third-fastest!

The Cross Turismo offers a little more headroom (.34 inches) for the front passengers but a lot more (3.6 inches) for rear passengers, along with a bucket seat experience. There’s more room in the back for bikes, golf clubs, or even car camping.

Porsche will have a rear bike rack (and even Porsche Electric bikes!) that we’re looking forward to checking out.

The front trunk is still smallish — enough room for a small suitcase or charging cables.

Porsche has another winner on its hands here. The big takeaway for me here is that you have fantastic sports cars like Tesla or Audi or Porsche, but the ability to go on gravel with those big AWD paws is another reality altogether. Stopping and starting are lightning quick, whether on asphalt, dirt, or even grass.

As for the road, the Cross Turismo maintains all of that road savvy that the regular Taycan has and adds some space for taller folks in the back.

The obvious EV competition here is Tesla, but Teslas aren’t great off road, and the suspension and ride aren’t quite as sporty. Teslas will still snap off the line slightly quicker, and they have a lot more space all around. But the spartan aesthetic has its fans and detractors. If you fall into the latter group, maybe the more luxurious interior of the Taycan makes sense for you.

As an EV advocate it is hard for me to imagine competition from other quarters but certainly Porsche ICE Panamera customers will be cannibalized here as well as potential customers of wagons from BMW and Mercedes.

For me, the perceived pretentiousness of owning a Porsche is probably the biggest hurdle (besides price) of buying this. The fact that the Taycan Cross Turismo Turbo is an electric car and much better for the environment tempers that a great deal, however.