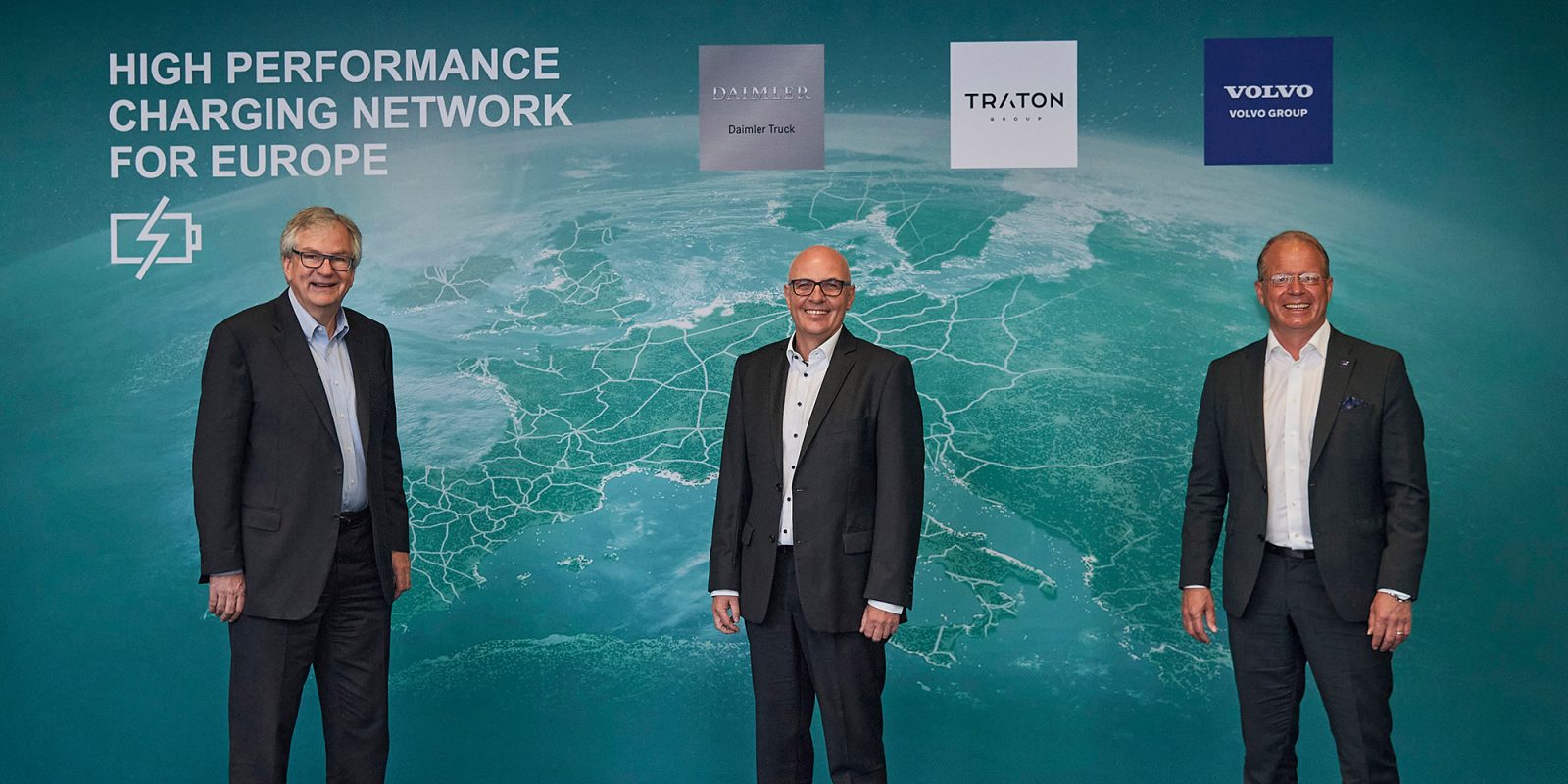 Volvo Group, Daimler Truck, and the TRATON GROUP have signed a non-binding agreement to implement and operate a high-performance public charging network for electric heavy-duty long-haul trucks throughout Europe. The agreement was signed to accelerate the growth of charging infrastructure and support the EU’s shift toward climate-neutral transportation.

Volvo Group (AB Volvo) is a multinational corporation whose subsidiary Volvo Trucks has manufactured a tremendous amount of the world’s heavy-duty trucks. Previously, the Swedish automaker has teamed with companies like DHL to produce electric heavy-duty trucks, and has also teamed with self-driving tech companies like Aurora to develop autonomous transport solutions.

While TRATON GROUP is a new manufacturer on our radar, we are very familiar with Daimler and its fleet of heavy-duty electric trucks that usually compete against Volvo.

With today’s announcement, these three manufacturing competitors hope to reach a joint venture next year to implement high-performance charging for their electric trucks.

In a press release from Volvo Group, the automaker has signed a non-binding agreement with competitors Daimler Trucks and TRATON Group to install and operate a high-performance charging network for electric heavy-duty long-haul trucks in Europe.

While the current agreement remains non-binding, it acts as the first step in these three truck manufacturers toward a future joint venture (JV) together. This venture would be split evenly three ways and is scheduled to begin operations in 2022

Within five years from the establishment of said venture, the manufacturers have shared plans to invest €500 million together to fund the installation and operation of at least 1,700 high-performance charging points near highways, plus logistic and destination points.

This future JV will operate under its own corporate identity to be named at a later date, and will be based in Amsterdam. Outside of this agreement and JV, Volvo, Daimler, and TRATON will remain competitors in all other aspects. Martin Lundstedt, president and CEO Volvo Group, elaborates:

We are laying the necessary foundation in making a break-hrough for our customers to make the transformation to electrification by creating a European charging network leader. We have powerful electromobility technologies, and now, with Daimler Truck, the TRATON GROUP and thanks to the European Green Deal, also an industry-wide understanding as well as a political environment to make fundamental progress toward sustainable transport and infrastructure solutions.

The manufacturers expect the number of public charging points to increase significantly as time goes on by adding additional partners to the venture in addition to seeking public funding. The creation of the aforementioned JV will still need to pass multiple regulatory approvals in Europe. The official signing of the JV agreement is expected before the end of 2021.