First drive: Volvo’s 24,500lb VNR electric truck drives better than it has any right to 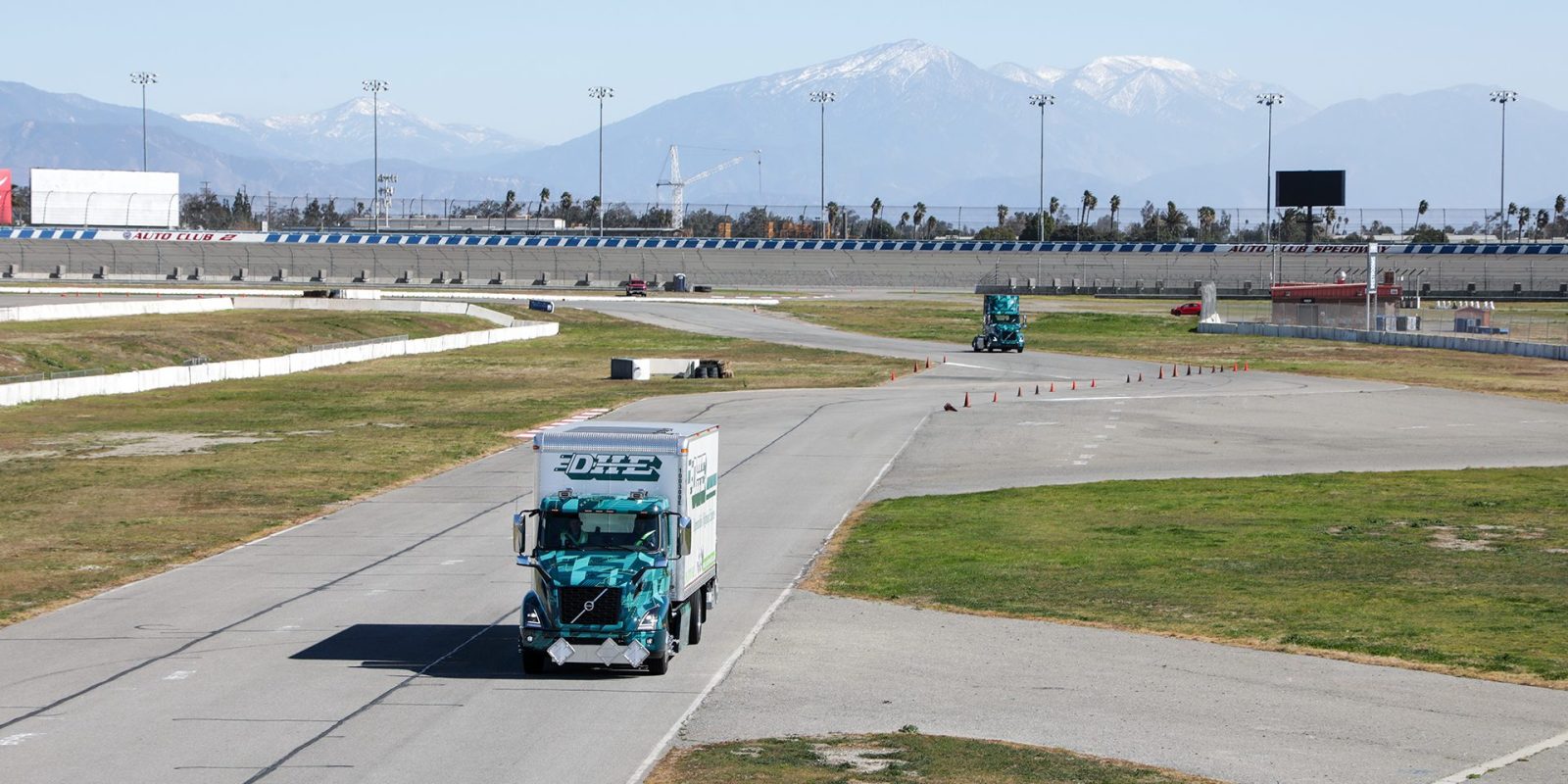 As part of the launch, Volvo invited us out to Fontana speedway for a quick drive of the VNR electric, which handled better than it has any right to given its huge size.

We wrote initial thoughts about the launch in our story earlier this week, but this will be a dive into more of the specs of the truck and the drive experience.

Volvo figures that the VNR electric can handle 75-175 mile routes comfortably for now, depending on a lot of factors.  That’s plenty for local distribution and regional distribution from ports to hubs, but not enough for anything longer-range yet. 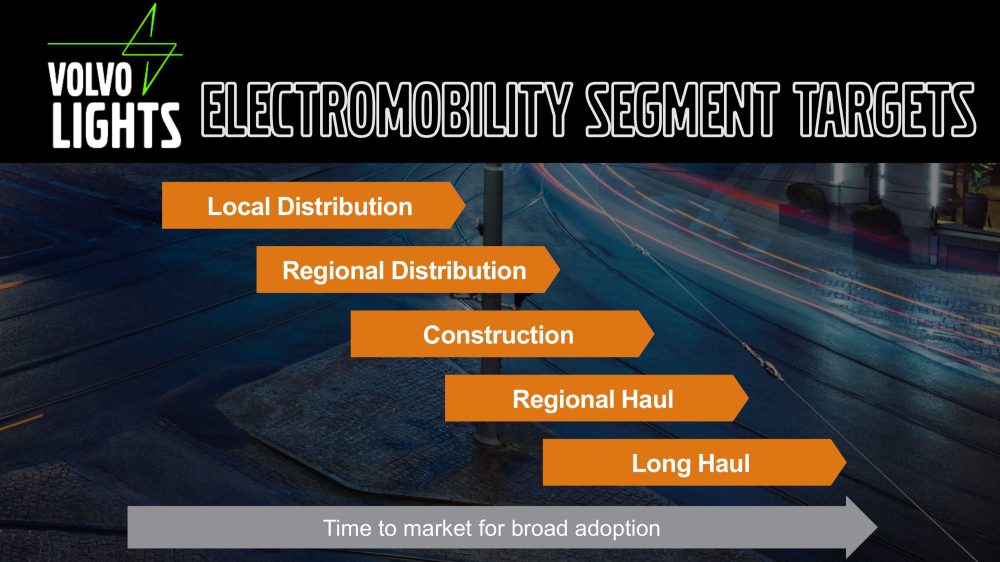 These trucks are capable of being charged at 150kW DC or 11kW AC.  Volvo has a 43kW AC charger coming on next year’s model, which will require 480V three-phase electricity to feed.

The batteries are placed below and behind the cab, along the sides of the truck.  This should enable easy service, as the batteries can be accessed from the side of the vehicle.  Volvo has considered battery swapping to get trucks in and out of the depot more quickly than charging, but hasn’t made a decision yet.

The motors have an interesting gearing configuration, with one mated to a two-speed transmission and the other mated to a one-speed.  The low gear on the two-speed gets the truck going, then the second gear and second motor get engaged at higher speeds.

Both motors are connected to a standard driveshaft.  Volvo thinks this will be more reliable than if they went with individual wheel or axle motors.

There are additional powertrain improvements planned for the future, and those could come as soon as the end of next year.

The truck does have disc brakes instead of drum brakes, which use less air and are lighter (plus it has regenerative braking), and the box truck configuration has a 4,000lb electric liftgate which can stay charged up through a solar array on the roof.

The truck as configured weighed 24,500lbs or about 8,000lbs more than the diesel version.  It still handles great and has plenty of power, but that weight deficit does affect cargo-hauling capacity.

With an 82,000lb combined weight limit (electrics get an extra 2,000 lb allowance from the government), this means the VNR electric can’t haul as much as the diesel VNR, by about 6,000lbs.  That’s about 1/7th less weight per load of cargo than the diesel.  This isn’t a big deal for cargo that isn’t very dense, but for heavy stuff it means more trucks to do the same amount of work.

Now we get to the fun part.  Volvo set up a track on Fontana speedway’s infield and let us have a short test drive around it.

The cab interior is a relatively standard affair that should be familiar to most truck drivers.  It was very similar to their standard diesel-powered VNR interior (quite different from Tesla Semi’s futuristic two-screen setup).

The buttons are large, the seat is soft with air ride suspension, and there is excellent visibility from the large windows.

But the drive is markedly different from what you expect out of such a large truck.  Gone is the lurching, jerking feel of gear shifts – it just gets up and goes.

It’s not going to beat sports cars off the line, of course, but the truck felt remarkably smooth and capable, well beyond my expectations.  We didn’t get a 0-60 time, but it would definitely pull away from the diesel trucks and even felt like it would be able to keep up with some of the slower cars on the road – and without belching smoke or grinding through the gears on the way there.

It took turns well too, much better than its weight would suggest.  That said, the box truck we drove was unloaded, so it would surely be a little more difficult with a full load.  Nevertheless, with more torque and the instant power delivery of electric motors, the truck should be much more nimble than the diesel version.

Gear shifts were imperceptible, with power being smoothly handed from one motor to the other.  This made the ride so much more pleasant than one would expect of a truck – especially without the noise and smell of a diesel engine.

The VNR electric can also use the full 260kW of its motors for regenerative braking purposes, which results in significant deceleration.  Volvo had us floor it on the back straight and then use the regen to slow down for a turn, and we didn’t have to tap the brakes at all.

There are multiple levels of regen selectable by the driver.  This should be useful for different road conditions – stop-and-go in a city or in traffic, driving down long grades, etc.

That latter situation is a real benefit of electric.  Not only does it eliminate the noise of a jake brake, but it also adds energy back into the batteries, making long downward grades a good way to regain a few miles of range.

Volvo also had us try backing up the truck on the track in a parking simulation exercise to demonstrate how easy precise throttle application is with an electric motor.  Between the great visibility, backup camera, lack of gear shifts, and precise throttle control, the VNR electric should be easy to drive in tight spaces.

Other than the electric powertrain, Volvo uses a lot of standard switches, air compressors and so on.

The decision to use standard parts fits better into Volvo’s current manufacturing capabilities, allowing them to fit it more easily into their current vehicle lines.  It also enables purchasers to fit the truck into their fleet more easily, since they don’t need to build up a whole new parts bin just for a trial truck.

Volvo focused a lot on this “mixed fleet” strategy, expecting that fleet owners would prefer to slot just a few trucks into their yard to see how they work before going all-in.  The maintenance schedule for the VNR electric hasn’t yet been published, but Volvo says it will be approximately the same as their diesel trucks, with similar 98-99% uptime.  Volvo thinks this would lead to more predictable downtime for mixed-fleet operators than having staggered maintenance schedules for different vehicles.

This is a little unfortunate since theoretically an electric truck should be more reliable than a diesel-powered one, and thus should require less maintenance (e.g. oil changes, brake service due to regenerative braking).  We asked Volvo if the decision to do a retrofit involved any design compromises, and they reiterated their point about standard maintenance schedules. 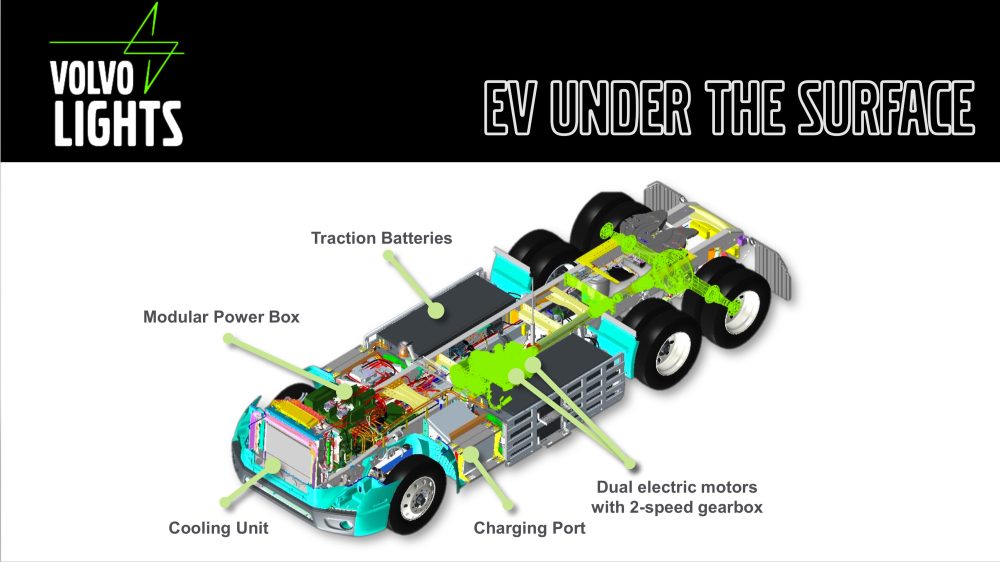 Had they built it from the ground up, they likely could have re-engineered the engine compartment for better aerodynamics (thus more range and more money saved for fleet operators) or better packaging (reducing the length of the truck or adding more space for the driver).

So the retrofit nature of this truck does loom over it as a possible downside.  In general, purpose-built electric vehicles that start with a “clean sheet” approach to their design are able to better leverage the strengths of an electric powertrain.  This leads to better vehicles overall, but also takes more development and tooling time.

Volvo told us they have only been working on their VNR electric truck for about a year, and plan to start selling them to customers at the end of this year, so that wouldn’t be nearly enough time for a ground-up approach.

The project was already quite impressive for only having a year’s work, but it was still quite clearly incomplete.

Beyond just the ride and drive portion of the day, Volvo ran us through lots of big-picture seminars talking about infrastructure development (with utilities and charging installers), community engagement (with regulators and local communities), service training (with local colleges) and so on. It’s clear they’ve put a lot of thought into this project and aren’t just blindly tossing a half-baked idea out into the world.

They deserve kudos for that, especially having put all of this together on such a short timeline and getting several impressive, working prototypes onto the road hauling goods already.

But the project is still incomplete.  Despite inviting many fleet buyers to their event, Volvo couldn’t give us a price, or even a ballpark.  The VNR electric will cost more than the diesel-powered truck, and likely quite a lot more.  Though running costs will be much lower and there will be incentives involved, as these trucks will be a large boon for air quality.

A number of other questions got general big-picture answers which didn’t satisfy us on the specifics.  Even down to the specs of the truck we were given a lot of wide ranges and some conflicting answers depending on who we asked.

Those answers are part of the reason their pilot program exists, as they’re still collecting data on how these trucks will be used.  Every prototype is equipped with a large data collection unit that Volvo will use to inform their decisions as the truck gets closer to completion.

And despite a few hand-wavey answers, there was still plenty of excitement in the room.  One representative from a food distributor was nothing but smiles when he got out of the truck, despite expressing some skepticism on the bus ride over to the track.  Another logistics manager was considering canceling his Tesla Semi order to get the VNR electric instead.  And Troy Musgrave, a director from Dependable Supply Chain who Volvo partnered with for this project, was just excited to get these electric trucks on the road and start saving money as quickly as possible.

We’re excited too, especially if it means we don’t have to listen to or breathe the exhaust of those noisy, dirty diesel trucks anymore.