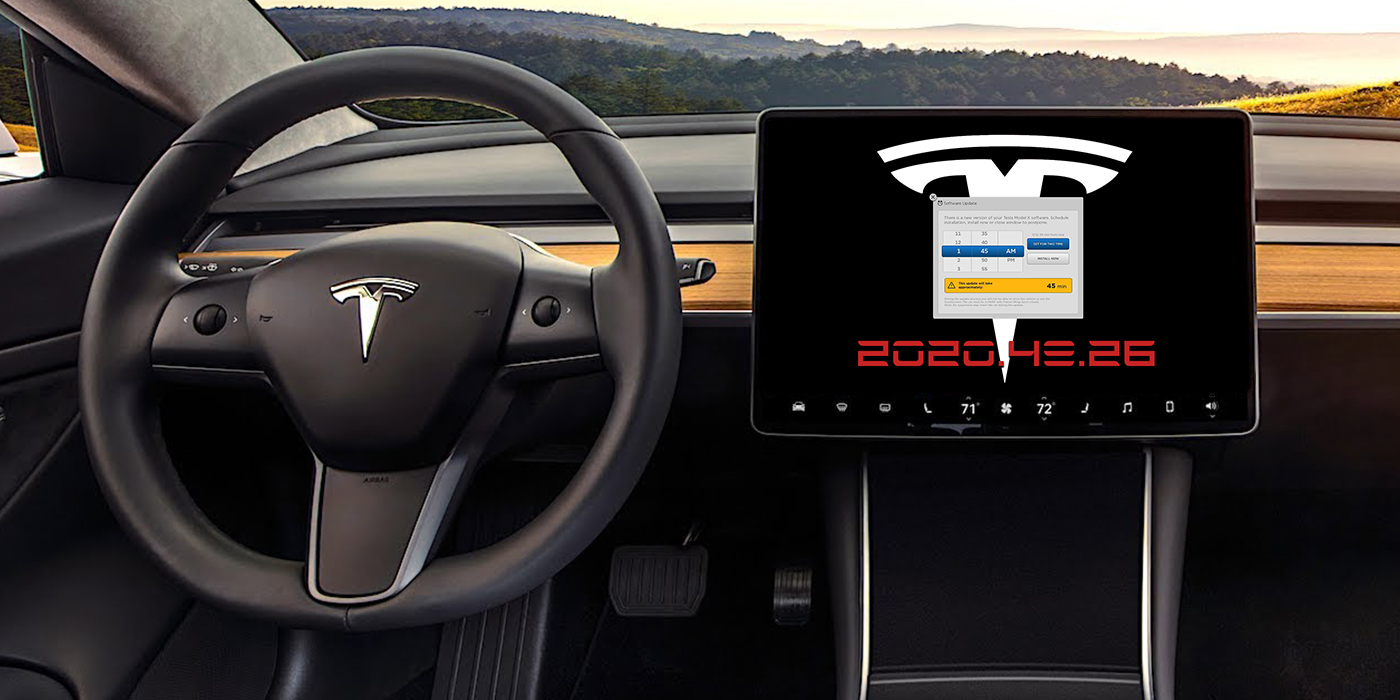 After much teasing from CEO Elon Musk, Tesla has released its long promised “holiday update.” It is now available over the air to Tesla’s entire EV fleet. The release notes of the Tesla software update 2020.48.26 have a lot of new features to offer Tesla owners.

This post will focus on one of the more robust updates released by Tesla in recent months, version 2020.48.26. Here’s a breakdown of the release notes and what new improvements Tesla drivers can expect from this update.

Speaking of release notes, that is the first improvement in the latest software. Tesla’s release notes within the vehicle are now easier to access and browse through. To peruse any current and previous release notes, simply tap “controls” > “software” > “release notes”, voila!

This update applies to all four current electric vehicles in Tesla’s squad. Most of the below mentioned features are currently available worldwide. Since this update, Tesla has release a couple newer versions, but those are focused on small bug fixes, and do not implement new features. Let’s see what Tesla owners can now utilize.

Somehow in CEO Elon Musk’s busy life colonizing Mars, covering the entire planet with a blanket of wifi, and eliminating our dependency on fossil fuels, he still has time to play video games. Musk originally hyped this holiday update as being “fire,” and we now know he was partially referring to three new games for Tesla’s arcade platform.

As Tesla moves toward a future with autonomous driving, it feels that quality entertainment within its vehicles will be crucial to the overall traveling experience. These three games breathe new life into the Tesla Arcade, especially if you’re tired of constantly dying in Cuphead.

The Battle of Polytopia

The developers describe this game as strategy with cute lo-poly graphics. According to the game’s official page:

The Battle of Polytopia is an award winning  turn based strategy game about building a civilization and going into battle. With millions of players, it has quickly become one of the most popular mobile strategy  games.

You play as one of many tribes, explore the world, build cities, develop technologies and wage war against other tribes in order to take control over the mythical land of Polytopia.

This game was originally released on other gaming platforms in 2017 and has since received a sequel. According to its developer The GentleBros:

Cat Quest is a 2d Open World RPG by The Gentlebros. Set in the fantastic and wonderful world of cats, play as a catventurer as you explore a massive continent crafted in the unique style of tapestry! Relive the good old days of exploring an overworld map as you raid dungeons for epic loot, complete quests and meet the many furry denizens of this world!

According to Tesla’s release notes for the 2020.48.26 software update, Cat Quest is now available to all Tesla owners. Perhaps we will see Cat Quest II arrive on a future upgrade? Time will tell.

The last newcomer the the Tesla Arcade is a classic card game, Solitaire aka Klondike. In the Tesla arcade, this game is listed as “Kabal.” You’ve probably played it in the school computer lab at some point instead of doing your assignment. Simple yet addicting, drag the cards to clear the table of each suit. We don’t have an actual picture of the game yet, but here’s a rough rendering to give you an idea of what to expect.

Gone are the days of sitting at boring old stop lights. Tesla may become the new go to vessel in providing the beats at your next tailgate (pending large gatherings becoming safe again). Tesla’s 2020.48.26 release introduces the new Boombox feature, allowing you to transform your Tesla into a large speaker when parked. You can also customize the up to five different sounds your car makes when you press the horn, drive the car, or when your car is moving with “Summon.”

So far, this feature is only available to U.S. based Teslas, so those drivers stateside can bump “Party in the U.S.A.” while the rest of the world waits for Boombox to arrive. It’s also important to note that the Boombox feature also requires the Pedestrian Warning Speaker.

This tongue in cheek testing mode was originally introduced as an easter egg a few years ago. It offers Tesla owners not one, not two, but six unique fart noises available at a single tap. Now, this flatulent feature can also be used outside of your Tesla to catch unsuspecting passersby off guard. To set this up, select your desired sound and place the cushion on the external speaker. This “important” tool lives in the Toybox under Tesla’s Application Launcher.

Similar to the Boombox feature, the new and improved Emissions Testing Mode also requires a Pedestrian Warning Speaker and is currently only available for download in the United States.

Tesla continues to improve its self-driving visualization with its latest 2020.48.26 release. This feature now offers a larger window of visualization, allowing Tesla drivers to view even more details of the road and its given surroundings. Furthermore, the next turn will now appear above the visualization if the navigation list is covered by another app. Drivers can now remain on course through navigation while the vehicle itself continues to chart any potential threats to safety up ahead.

Tesla has been inching closer and closer to full-self driving capabilities within its fleet, and these recent visual improvements are more evidence of this. This would ideally help build further confidence in the technology as it starts to emerge on roads. Yes, FSD is slowly becoming a reality, but it’s still quite a ways away from a full rollout and warm embrace from drivers and safety regulators alike.

Scheduled Departure was originally introduced by Tesla to help its vehicles maximize range and efficiency, especially in cold weather. The feature allows you to precondition your car around your schedule by plugging it in and setting a designated departure time. This allows your Tesla to charge during non-peak hours while warming the battery and vehicle itself before you depart.

Previously, some drivers in cold climates reported issues with this feature ending its charging cycle around 5:30AM even though they had a departure time set for a couple hours later. Essentially, the Tesla was torn between ending the charge to avoid peak hours or charging up to the time of departure to precondition the vehicle, but at a higher energy cost.

With improvements to Scheduled Departure, you can now precondition your battery and cabin even when your car is unplugged. To account for different utility rates, you can now also set the time window of your off-peak rates to cut down further on charging costs.

Tesla’s Supercharger network offers its drivers an ever growing arsenal of fast-charging stations positioned along major roadways globally. The automaker recently announced it has already topped 20,000 Supercharger stalls worldwide and continues to expand.

Tesla drivers are able to view the map of the Supercharger network from their vehicle, and the holiday update now offers even more granular details. With the latest 2020.48.26 software update, Supercharger pins on your touchscreen will now display the number of available stalls at a given charging site.

Need something to do during those 30 to 45 minutes while your EV is charging? You can now search for nearby amenities by tapping the icon on the Supercharger display. We see cheese fries in your future.

Last, and maybe least, Tesla has removed the “T” icon from the top of its status bar display on the touch screen. Your Tesla vehicle information is still available of course, just simply tap “controls” > “software” for the same details.

There you have it, all the details from the release notes coinciding with Tesla’s 2020.48.26 software update. Look to Electrek for a full breakdown of the next large software update when it goes live. Until then, good luck on your Cat Quest!