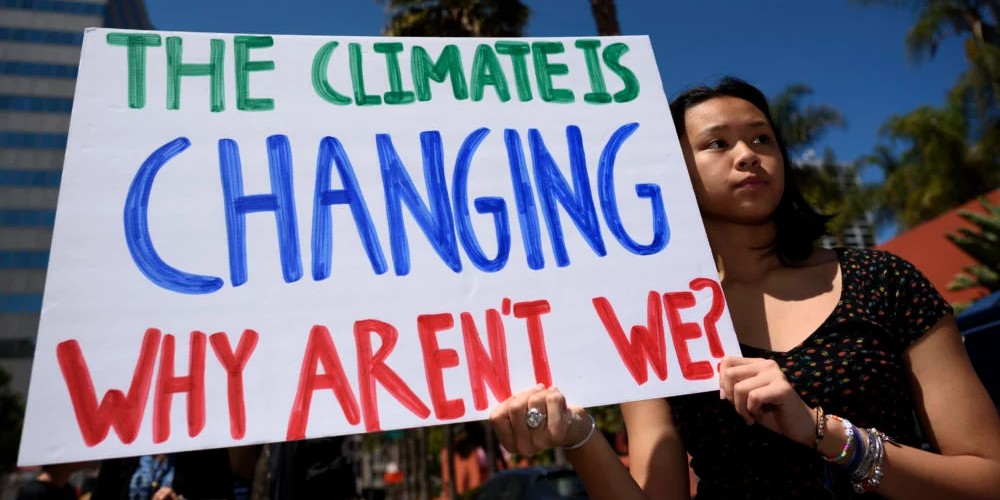 The phrase “the Green New Deal” is being lobbed around like crazy, with just weeks left until the US election. Variations of the phrase are also used in other countries such as South Korea and in the EU. But what exactly does “Green New Deal” mean in the US? Voters need to understand it, as it’s make-or-break time.

To paraphrase the global journalism initiative Covering Climate Now, the Green New Deal is a broad resolution that aims to combat the climate crisis by creating a large number of green jobs and business opportunities through government investments.

The meaning of the Green New Deal has evolved quite a bit since Representative Alexandria Ocasio-Cortez (D-NY) and Senator Ed Markey (D-MA) released a 14-page resolution on February 7, 2019. The term originally combined President Franklin Delano Roosevelt’s approach in the New Deal during the Great Depression with ideas about green energy.

So here’s a comparison of Joe Biden’s and Donald Trump’s approaches to dealing (or not dealing) with the climate crisis:

Donald Trump: Trump doesn’t have a climate change policy. Look it up yourself before you post about it in the comments, please: Here’s the link to Trump’s energy and environment page. Trump’s “plan” is to support fossil fuels, EPA rollbacks, and leave the Paris Agreement. He signed the One Trillion Trees Initiative on Tuesday, which is nice, but it’s no substitute for steeply cutting fossil-fuel emissions. The world “climate” is mentioned nowhere in the Trees executive order, nor are there specific details on implementation — have a look here.

Joe Biden: Biden’s $2 trillion, specific clean energy plan isn’t called the Green New Deal. It’s called the “Biden Plan” on his website, and it’s the most ambitious climate action plan to ever be floated by a major US party platform. Biden’s plan emerged from negotiations with Bernie Sanders’ camp after Biden won the primaries, and involved such Democrats as Jay Inslee, Ocasio-Cortez, and John Kerry in its planning.

Biden’s plan says it will decarbonize the US’s electricity sector by 2035. It also states that 40% of federal climate spending will go to lower-income communities and persons of color. Green job creation is a central focus of Biden’s plan. It also includes the following, which is briefly summarized here and laid out on his website in great, quantifiable detail:

Biden is considering creating a special White House office led by a climate “czar” to coordinate efforts to fight climate change if he wins the election.

Biden’s camp states that they won’t abandon fracking, and Electrek disagrees with that decision.

We at Electrek can’t state this strongly enough: Climate change is the issue that binds all issues. It envelops everything. So, American voters, will you choose no plan, or an imperfect yet ambitious plan that, like a public bus, gets you closest to home, rather than nowhere?

The Yale Program on Climate Change Communication (YPCCC) has released a new study on Americans’ attitudes toward the climate crisis. They’ve categorized Americans into what they call “six Americas”:

The Alarmed are the most engaged, are very worried about climate change, and strongly support actions to address it. The Concerned think global warming is a significant threat, but prioritize it less and are less motivated to take action. The Cautious are aware of the warming but are uncertain about its causes and are not worried about it. The Disengaged are largely unaware of global warming, while the Doubtful doubt it is happening or human-caused and perceive it as a low risk. The Dismissive do not believe the planet is warming or that it is human-caused. They oppose most climate policies.

The bottom line is that today, the Alarmed (26%) outnumber the Dismissive (7%) nearly 4 to 1. More than half (54%) of Americans are either Alarmed or Concerned, while the Doubtful and Dismissive are only 18% of the population.

Over the past five years, the Alarmed segment has more than doubled in size (from 11% to 26% of the US adult population), while the Dismissive segment has decreased by nearly half (from 12% to 7%).

Anthony Leiserowitz, a senior research scientist and the director of the YPCCC, told Grist:

It indicates a massive shift in our political, social, and cultural understanding of climate change.

In other words, Americans are beginning to wake up.

What is it about Swedish climate activist Greta Thunberg that inspires millions of young people and adults to follow her example, as we portray week in and week out on this weekly roundup of #FridaysForFuture tweets? How did a teenager gain a platform to speak at the United Nations? And why does she inspire hatred in grown men — it’s almost always grown men — who spew vitriol about her on social media?

The documentary I am Greta takes a look at Thunberg’s journey and motivations, and the action the world has taken — or not taken — in response to her laser-focused demand for action on climate change. The trailer is below:

On Thursday, Thunberg posted a very pointed Twitter response to US supreme court candidate Amy Coney Barrett’s response during US Senate hearings on whether Coney Barrett believes that humans cause climate change. Coney Barrett said she doesn’t feel “confident to opine on what causes global warming.” She also said she didn’t know that she “has seen the president’s expressions on climate change.” (Does Coney Barrett read or watch the news, or has she looked at Trump’s official website?):

The documentary is definitely worth watching. Because, in Thunberg’s words, “Once you understand the magnitude of the problem, you can’t erase it.”

Do you want the good news or the bad news first about coral reefs this week? Let’s get the bad news out of the way.

Australia’s Great Barrier Reef has lost more than half its coral in the last three decades and scientists fear the loss caused by frequent bleaching will compromise its ability to recover, reported Reuters.

We used to think the Great Barrier Reef is protected by its sheer size, but our results show that even the world’s largest and relatively well-protected reef system is increasingly compromised and in decline.

Now, following that bit of awfulness — yet another reason to act on the climate crisis — some good news from the US:

NOAA Fisheries issued a final rule on Thursday to protect 13 coral areas from the US-Mexico border to the Florida Keys, including a series of deep-sea canyons, reefs, and coral areas that have been identified as important habitat for species such as sharks and grouper.

Oceana, which has been campaigning for nearly two decades on this Gulf of Mexico issue, said:

But more must be done. Hundreds of documented deep-sea coral areas in the Gulf remain unprotected. Oceana is calling on the Gulf Council to ‘freeze the footprint’ of destructive fishing methods like bottom trawling and dredging to protect corals in the deepest parts of the Gulf. Freeze the footprint management actions by the Mid-Atlantic and South Atlantic Fishery Management Councils have protected more than 61,000 square miles of ocean habitat without displacing current fishing.

Like David Attenborough said in his newest documentary, we can do something about taking care of our planet.

Here’s our weekly roundup of young climate-change activists from around the world. Speaking of Thunberg, she was out and socially distanced:

And there’s a brand-new Twitter feed that debuted yesterday called Fridays For Future MAPA: “Youth climate activists from the Most Affected People and Areas.” I expect that MAPA will become an acronym that is used in everyday climate-crisis discourse:

The young people of The Years Project has a message for US politicians and voters:

And finally, from the young people of Allegheny County, Pennsylvania: