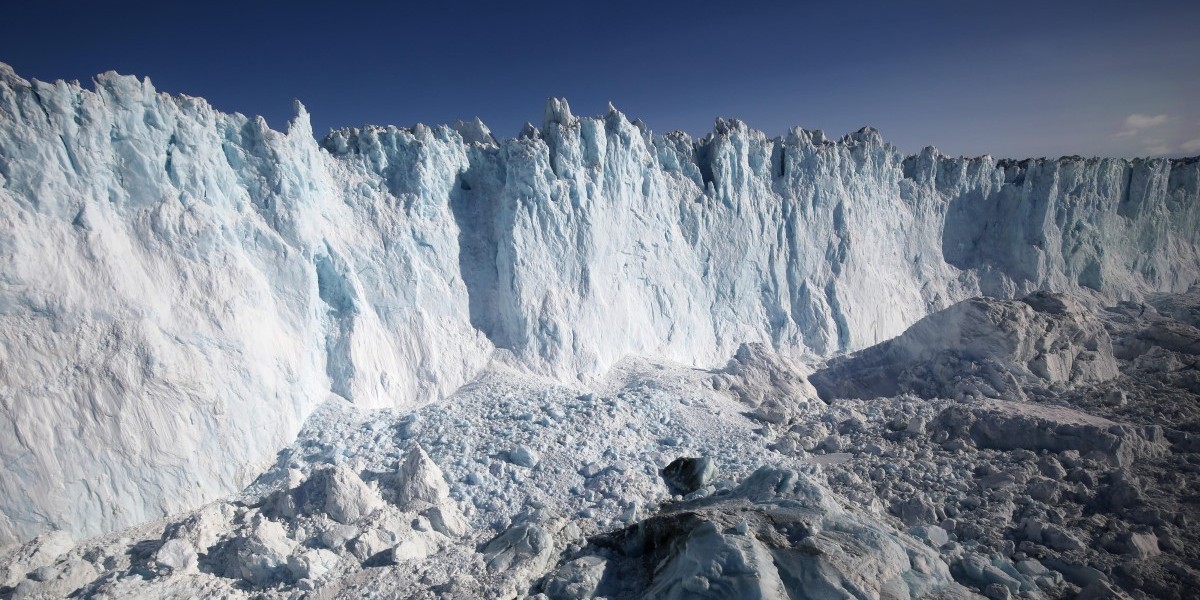 Greenland’s ice sheet, which is three times the size of Texas, is starting to melt faster than at any time in the past 12,000 years, according to new research published in Nature.

The study’s team produced a computer model of a section of the ice sheet’s southwestern area over the past 12,000 years and then projected forward to the end of this century. The increased loss of Greenland’s ice alone is likely to lead to sea level rises of between 2 cm (0.79 inches) and 10 cm (3.9 inches) by 2100.

Glaciers deposit boulders containing beryllium-10 as they move, and measurements of beryllium-10 can reveal how long the boulders have been in position, and thus where the edge of the ice sheet was when the boulder was deposited.

Before the start of the human industrial era, the highest rate of mass loss occurred around 12,000 years ago during the early Holocene. At this time, southwestern Greenland was losing ice at a rate of 6,000bn tonnes per century.

Over the past two decades, it has been losing ice at a rate of around 6,100bn tonnes per century, the study says.

If the global target of limiting global warming to 2C is achieved, this level will rise to 8,800bn tonnes per century.

However, if future emissions are very high, it could rise to up to 35,900bn tonnes per century — adding almost 10cm to global sea levels, the lead author tells Carbon Brief.

Jason Briner, a professor of geology at the University of Buffalo and lead author of the paper, said [via the Guardian]:

We have altered our planet so much that the rates of ice sheet melt this century are on pace to be greater than anything we have seen under natural variability of the ice sheet over the past 12,000 years.

Before our study, science did not have a great handle on the long-term trends of the rate of Greenland ice loss.

The above news is heavy. But all is not hopeless — British environmentalist and nature documentary filmmaker Sir David Attenborough says he has a plan.

We need to learn how to work with nature rather than against it. And I’m going to tell you how.

The 94-year-old joined Instagram in the last week and has already gained nearly 5 million followers. That’s good news: People want to hear what he has to say. And his new documentary, A Life on Our Planet, debuts on Netflix on Sunday, October 4. It “reflects upon both the defining moments of his lifetime and the devastating changes he has seen.”

When making A Life on Our Planet, perhaps the biggest theme that emerged was that the natural world is more than a ‘nice to have’, it is fundamental to our survival because we too are part of nature.

This film is a must-watch, to learn, to hope — and to act. We look forward to reading your reviews of the documentary in the comments section below.

On Thursday, the Environmental Defense Fund (EDF) launched the Climate Authenticity Meter, a new tool to evaluate businesses’ climate goals against their policy leadership needed to make those goals a reality.

The Climate Authenticity Meter will look beyond the broad emissions reductions goals and examine the day-to-day policy advocacy needed to make those goals a reality. In other words, who’s actually putting their money where their mouth is?

On the very naughty list is the US Chamber of Commerce: It “obstructs progress on climate policy because it sends the wrong signal to policymakers about the business value of reducing climate risk.”

On the very good list: Shell and BP. (Yes, you read that right.) Why? “Making climate policy a CEO-level priority and meeting directly with lawmakers clearly supports progress on climate policy.”

Click the link above to see the EDF’s ratings.

Guess what? US PACs, or political action committees, have agendas. PACs pool campaign contributions and donate those funds to campaigns for or against candidates or issues. And Vote Climate U.S. PAC’s issue is… drum roll… green energy and slowing climate change.

Vote Climate U.S. PAC works to elect candidates to get off fossil fuels, transition to clean, renewable, energy, and reduce carbon pollution by putting a fee on carbon in order to slow climate change and related weather extremes.

So US voters who care about the planet, here’s a handy tool from Vote Climate U.S. PAC called the climate change voter’s guide to help people figure out which candidates think and do what when it comes to climate issues.

We know climate change is a top priority issue for voters in 2020. Vote Climate U.S. PAC did the research for you. Our national climate change voter’s guide makes it possible for every American to vote climate. We hope to revolutionize the politics of climate change by electing climate-action candidates from across the country.

Here’s what’s happened around the world this week in the #FridaysForFuture protests.

The young people were out Friday evening in Kyoto, Japan:

Fridays for Future India were out:

And Josh from Uganda made a rather good point:

And finally, David P Merriam was out supporting his grandkids in the US with the hashtag #BoomersForClimateJustice: