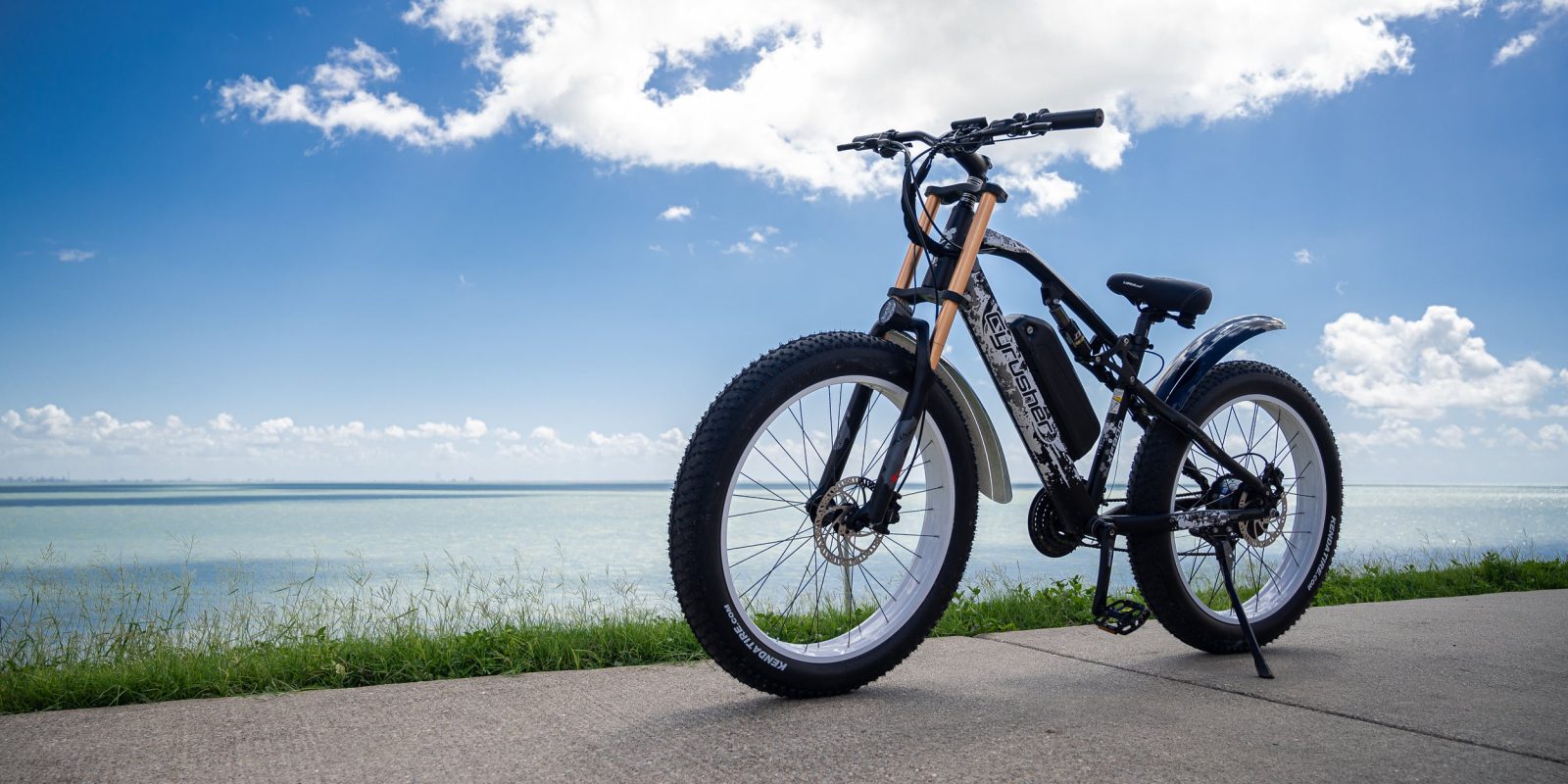 The Cyrusher Everest XF900, which was just launched today, claims to be a motorcycle-inspired e-bike that combines the best of both worlds. It offers high-speed riding, full suspension, hydraulic disc brakes, and other premium features, not to mention a price set conspicuously below its competitors.

Shenzhen-based Cyrusher isn’t new to e-bikes — they’ve been around the block several times.

But the company’s latest electric bike pushes the manufacturer into new territory with nicer components and at a better price point than the company has previously hit for such a bike.

The new Cyrusher Everest XF900 is being positioned as a dual purpose trail or city bike, as the company further explained:

The Everest XF900 was designed to tackle any mountain in your path. Whether you’re riding through literal mountains, or just navigating an urban jungle, the Everest XF900 is capable of going wherever your adventures take you. We started with our beloved motorcycle-style design and worked our way up from there.

Immediately apparent is the motorcycle-style double-crown front suspension fork, which is much more robust than a typical bicycle suspension fork and hints at the rugged riding for which the Cyrusher Everest XF900 is designed.

Less eye-catching is the muted rear shock filling out the full-suspension nature of the bike.

For power, the Cyrusher Everest XF900 is propelled by a 750W continuous rear hub motor made by e-bike motor giant Bafang.

Like most e-bikes with 750W continuous ratings, that motor is almost certainly pushing out a bit over 1,000W peak, which likely helps the bike reach its advertised top speed of 28 mph (45 km/h).

There are multiple 48V Samsung battery options including a 13Ah (624 Wh) battery and a 17Ah (816 Wh) battery. Choosing the former nets you a sale price of US$1,999 while the latter ups the cost to US$2,499. With the higher-priced model you also get an upgrade from a 7-speed Shimano transmission to a 21-speed unit, plus you also get an included rack, fenders, and a rear LED tail light. Those accessories are optional on the lower-priced model.

Accessories included on both models include a 250 lumen headlight, LCD display, and anti-puncture tire liners in those 4″ fat Kenda Juggernaut tires.

There aren’t a lot of full-suspension fat tire e-bikes out there to compare to, but we can still do a little comparison shopping here. The US$1,899 Juiced RipCurrent is probably the king of value-priced high-speed Class 3 fat tire e-bikes, at least in the US. For just $100 less than the Cyrusher Everest XF900 here, it offers similar components and specs, yet it lacks the XF900’s full suspension. $100 to add full suspension sounds good to me!

If you want to grab your own Cyrusher Everest XF900, the company is currently taking pre-orders via Indiegogo.

As always, we advise caution when backing Indiegogo campaigns. Unlike what some would have you believe, they aren’t necessarily scams (did you know Rad Power Bikes got their start on Indiegogo?!). But there are also crowdfunding horror stories out there of companies that sprung up overnight, took people’s money, and then never delivered.

On the optimistic side, Cyrusher isn’t a startup and they’ve delivered thousands of e-bikes all over the world. But with the current state of the e-bike industry amid surging demand, I wouldn’t be surprised if their December shipping date gets pushed back a bit.

I’ve only tested a single Cyrusher e-bike so far, the Cyrusher XF650 (review video below), but it was a fun if not slightly ridiculous fat tire e-bike. Cyrusher makes big, over-the-top electric bikes and they do it for decent prices. They aren’t at the quality level of nicer European e-bikes, but they seem on par with most of the big US brands in terms of components.

I wish I had more full-suspension fat tire bikes to use for a good price comparison, but most of the ones we’ve seen around here are either ridiculously powerful or are MUCH more expensive.

Maaaaaybe the $1,799 X-Treme Rocky Road 500W would make a decent comparison, but it has a smaller battery, smaller motor, and lower top speed.

Then there’s the $2,799 Eunorau Fat-HS electric mountain bike, but that’s a bit higher power and also more expensive. You see, there just aren’t a lot of similar e-bikes on the market yet.

But that kind of makes Cyrusher’s point for them. While there are a ton of fat tire e-bikes out there, this is one of the few full-suspension fat tire e-bikes that is actually priced to start under $2k. And that’s pretty impressive, especially when you clock the fast speed and good-albeit-not-great components included on the bike.

As much as I would have liked to see some more recognized brand names on the suspension, I might just be spoiled by some of the high-end Asian imports we’ve seen recently with pro-level suspension. But considering those cost twice the price, I can see why Cyrusher went with generic shocks.

We’ll be checking out one of the first bikes off the line once Cyrusher starts production, so check back here on Electrek in the future for that. Until then, let us know what you think of the Cyrusher Everest XF900 in the comment section below!