Lately I’ve been riding the 1,000 W Super Monarch All Wheel Drive (AWD) dual suspension electric fat bike from Ecells. And I’m finding it difficult to put into words how crazy and fun this e-bike is. But since that’s technically my job, let’s give it the ol’ college try.

I first tested this e-bike in its prototype form earlier this year. And while the prototype for the Super Monarch was quite good, the production version is so close to perfect that we’re starting to split hairs.

Now the first thing to know about this ride is that it is a tank of an e-bike.

We’re talking dual motors. Dual batteries. Dual suspension. Dual fat tires. Basically, take the most fun you’ve ever had on an e-bike and double it, because that’s what the Super Monarch has in store for you.

Check out my video review below, then read on to get the entire picture. 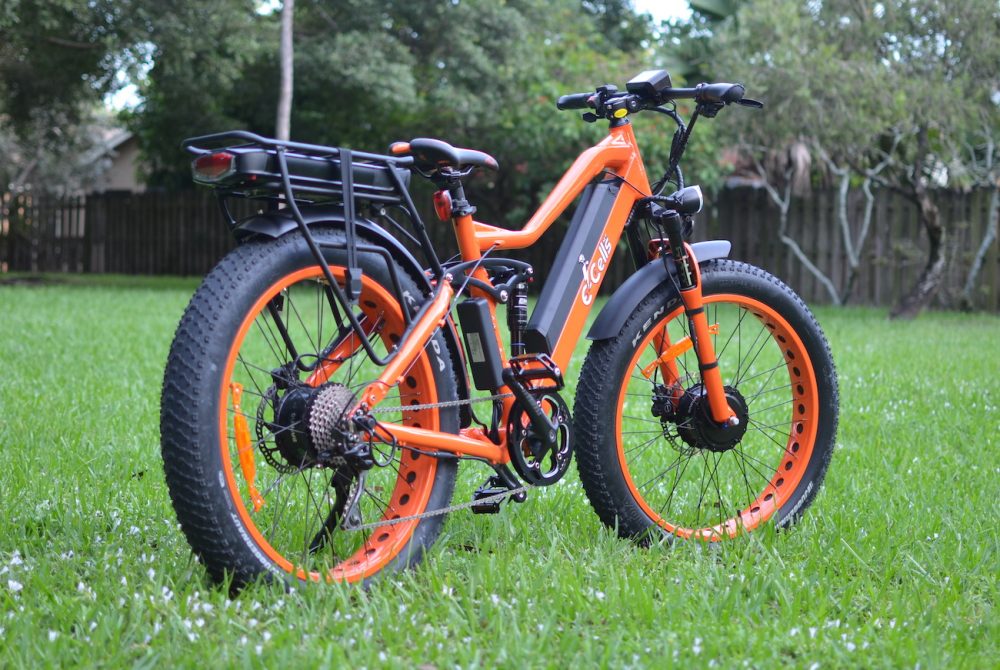 Getting the full experience

One of the things I loved the most about testing out the Super Monarch is how well it works both on and off-road.

While I loved riding it around the trails, I still have to take roads to get to some of my favorite places to ride. And instead of putting the bike in a car or truck and driving to my favorite playgrounds, I just pegged the throttle and rode straight there. With 1.5 kWh of battery, I knew I could make the 5-10 mile road trip, ride around on the trails until I got tired, then hit the road to head home – all on a single charge!

While the bike does come factory limited to 20 mph (32 km/h), it’s simple enough to enter the display settings and unlock the top speed. That allowed me to reach up to 32 mph (52 km/h) on the pavement.

Please note though: you shouldn’t travel at these speeds on shared trails where you could unexpectedly come across other bikers or hikers. I rarely hit those speeds off-road, and the only times I did were when I was on long straight farm trails where I could see hundreds of yards ahead and didn’t risk surprising anyone (or myself) with an unexpected encounter. Please ride responsibly.

Anyways, where was I? Oh right, the awesomeness. So I could fly down the road, out accelerating cars all the way to my destination. They rate this bike as a 1,000 W machine (dual 500 W motors), but that’s obviously continuous power, not peak power. Based on the power meter on the digital display, I could see my peak power hitting just shy of 1,500 W during acceleration. When the lights turned green, cars only passed me once I hit my top speed and they could catch up and overtake me at higher speeds.

And while on the road, the dual suspension and fat tires made me feel like I was riding on something with the comfort and stability of a motorcycle. Potholes, curbs, speed bumps, and everything else were mere blips to me. If I was on my electric road bike or even lighter electric mountain bike, I would have had a much healthier level of respect for such obstacles. But the Super Monarch just seemed to erase them from my path. I couldn’t wait to see what it could do with more technical terrain.

And I was absolutely not disappointed. Once I hit the trails, I felt like I was on a dirt bike flying up climbs. I couldn’t help but consider how much less fun those same climbs would have been if I was forced to summit on pedal power alone. Though I didn’t mind using the pedal assist either, especially since the PAS could do the majority of the work for me if I set the level high enough. C’mon, I don’t want it to make too much of an honest man out of me!

The pedal assist uses a cadence sensor, not a fancier torque sensor, which means there’s a bit of lag when you first start pedaling. The system takes about a second to kick in the power once your pedals beginning moving, which can be a bummer if you needed that power right then at the start of a climb. But you can always blip the throttle if you need immediate power and then your pedal assist will be there a second later.

So while a torque sensor would have been a nice upgrade, I probably wouldn’t have wanted the extra cost associated with it. And the Super Monarch is already a bit pricy as it is, at least compared to more budget-level offerings.

There’s a slightly lower power 700 W version (which is honestly probably enough for most people, considering this model’s excess power) which starts at $2,795. If you want this 1,000 W version, it will set you back $3,195. Though considering the dual motor, dual battery, and dual suspension set up, that’s actually a great price. And no one is paying me to say that (Electrek doesn’t do paid reviews). That’s my honest opinion. We’re talking about high-end hydraulic brakes, shifters, 1.5 kW of peak power, triple the battery capacity of most e-bikes, etc, etc, etc. Considering that this is a bike that can cover anything and go anywhere, these are some pretty reasonable prices.

There’s also a cool deal running right now where customers get around $150 worth of free accessories, including panniers, gloves, cargo net, helmet, toolkit that mounts to the rack, and more. So the deal just got a bit sweeter.

Now all of that being said, the Super Monarch still isn’t perfect.

For one thing, it’s heavy. Like, over 90 lb heavy. You can take around 20% of that weight off by pulling out the batteries, which might help when you need to lift the bike onto a car rack or into a truck, but it’s still a heavy bike.

If you were trying to do jumps and other acrobatics, you’d probably notice it more. I did some small jumps but nothing major, as I was mostly keeping both wheels on the ground. And considering the higher power of the bike compared to most e-bikes, I didn’t really notice the weight much while riding. Yes, the rear battery is mounted fairly high up. But because the rack is quite rigid, it didn’t affect the handling too much for me.

Again, if you’re at competition level then this setup might hold you back. But for most casual riders looking for a recreational ride, the weight distribution isn’t going to affect your performance much. You’ve probably got a 150 or 200 lb of meat centered above the top tube – a 10 lb battery just isn’t going to be as noticeable as people think.

The other thing is the bike draws a lot of attention. While that’s sometimes fun, other times I’m trying to be a bit more stealthy. I ride in many places where it’s totally legal to ride, but that doesn’t mean I won’t get snide comments or dirty looks from cyclists that still look down on e-bikes. And even though I make sure to ride respectfully when I’m near other riders and hikers, they will often assume I’m out there to be a hooligan.

But at the same time, I love the boldness of the bike and I still think it’s fun when I’m riding through town and I see heads turning left and right. And I’ve met a ton of nice people who come up and ask questions while I’m parking and locking my bike. So attention-grabbing e-bikes can go both ways.

Essentially, there’s a lot to love about this bike. It’s hard to find a more fun trail bike out there that can match these specs.

What do you think of the Super Monarch? Let us know in the comments below!