How electric bicycle motors are made: a behind-the-scenes Bafang factory tour

If you’ve ridden a few electric bicycles before, then you’ve probably found yourself using Bafang’s electric bicycle parts and not even realized it. Bafang is one of the largest manufacturers of electric bicycle motors and components, if not the single largest, and we were fortunate enough to be invited to their factory to see how they build electric motors.

Getting a chance to see how e-bikes and their parts are made is always an interesting opportunity.

We previously toured the FREY electric bicycle factory in China, where we got a firsthand look at the design and fabrication process of full e-bikes.

Now we’re back with a more in-depth factory tour of the parts that make their way into e-bikes.

How Bafang’s electric motors are made

Our journey began at the Bafang factory in Suzhou, China.

We started the same way Bafang’s mid-drive electric motors do, at the beginning of the production line.

The motors that we followed begin as bare shells. Workers assemble the core components of the motors by hand-placing magnets and winding copper wire around stators — the stationary portion of the motor.

You can see these steps in our factory tour video below:

The shells with just the motor components are placed onto a slowly advancing conveyer belt where they are picked up by a worker at the next station.

There, the controller, which is assembled in a clean room upstairs, is bolted into place using overhead air tools. 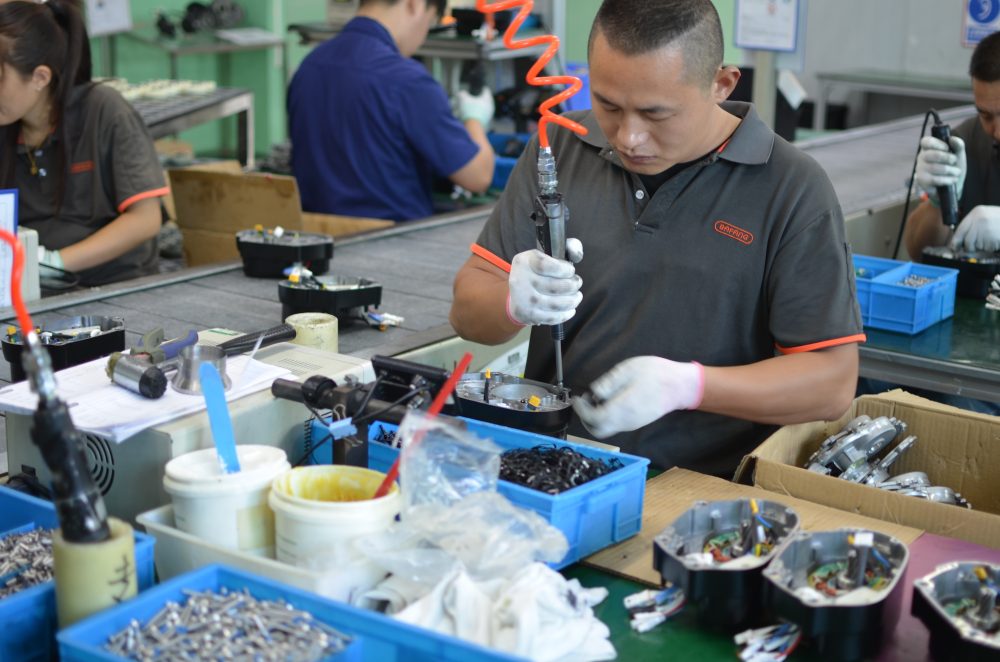 The motor and controller combo go back onto the conveyer belt to a test station, where the next employee runs an electrical test on the controller. Once it checks out, the partially completed motor gets passed further down the line to the gear section. Here, nylon gears are inserted into the motor’s casing. These help reduce the output speed of the fast-spinning motor and also increase the motor’s torque.

The last stage of the mid-drive motor assembly process sees the motors being conveyer-belted down to the side cover station. In this station, employees bolt on the covers that seal the motors, resulting in a fully assembled Bafang mid-drive motor. 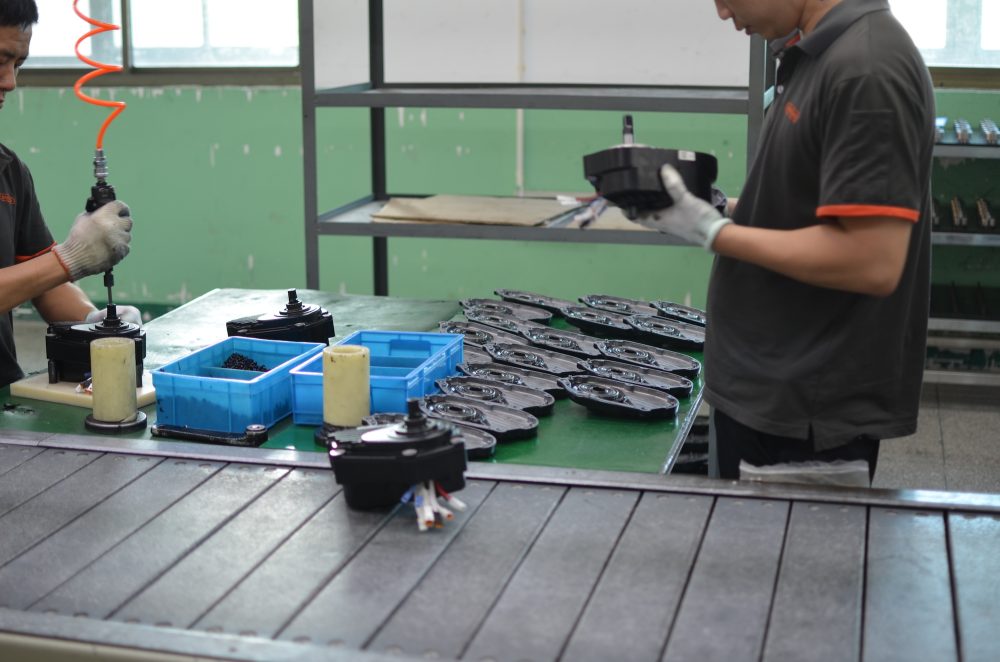 But even though the motor is fully assembled, it isn’t finished yet. It passes further along the conveyer belt into the next room for stress testing. Here the motor is loaded into a machine that simulates it driving an electric bicycle under load. A dynamometer measures its power output and ensures it is performing to spec. 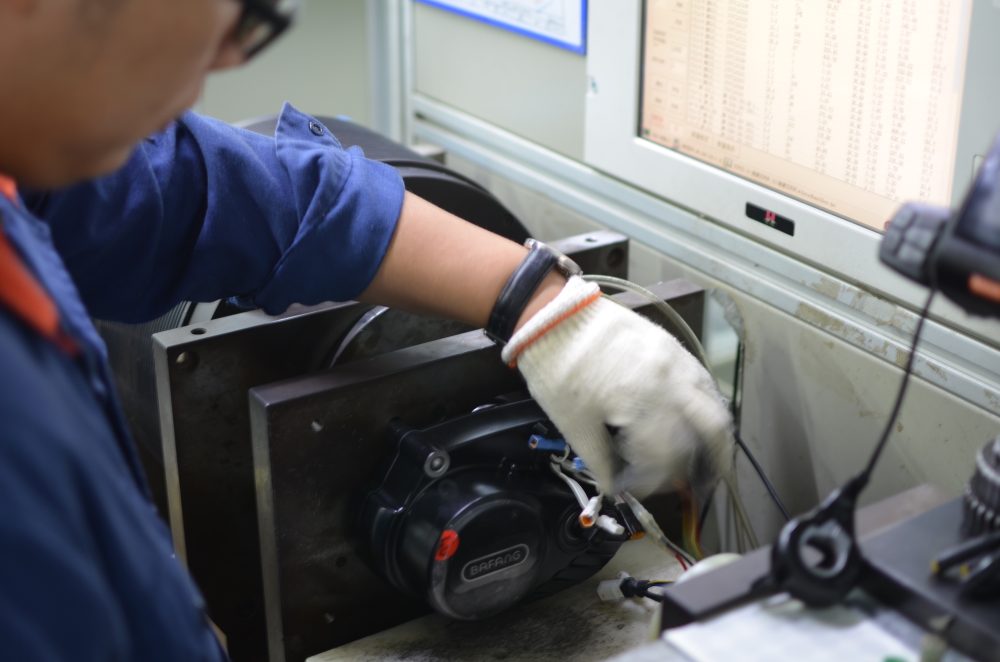 If it passes the test, then it gets the all important “QC-Passed” sticker and then heads back to the belt.

There it is transported down to the serialization station, which is the second-to-last station for the motors. 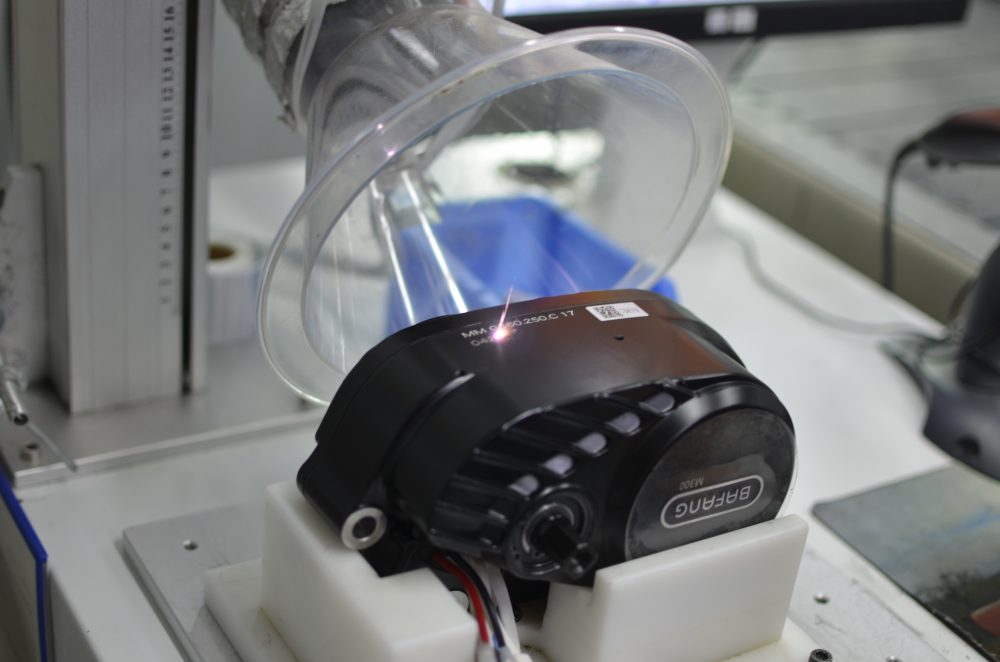 Here the motor is laser engraved with its unique serial code and is recorded into Bafang’s system.

It then takes its final trip along the conveyer belt to the packing room, where it is packaged into a box with other motors and prepared to ship out to one of many of Bafang’s customers. These companies build hundreds of different models of electric bicycles using Bafang’s motors and e-bike parts.

But that’s not the end of the journey for every motor. While most get boxed up and shipped out, a few are plucked from the line and installed on test bikes at the factory.

Bafang maintains a test-rider team of various heights and weights to ride e-bikes with Bafang parts, stressing the components and searching for areas or weakness or failure under real-world riding conditions.

As Bafang continues to expand, its global footprint is growing. The company is preparing to move into a larger campus in China and has already built a second factory in Poland. The European factory should help it compete even more with major European manufacturers like Bosch and Brose, and may also help it skirt Europe’s anti-dumping import laws aimed at Chinese e-bike manufacturers.

If this tour has you interested in Bafang motors, then check out some of the Bafang-powered e-bikes we’ve reviewed so far.

And you can also see a recent e-bike factory tour we took in China, where these types of motors are incorporated into full e-bikes.