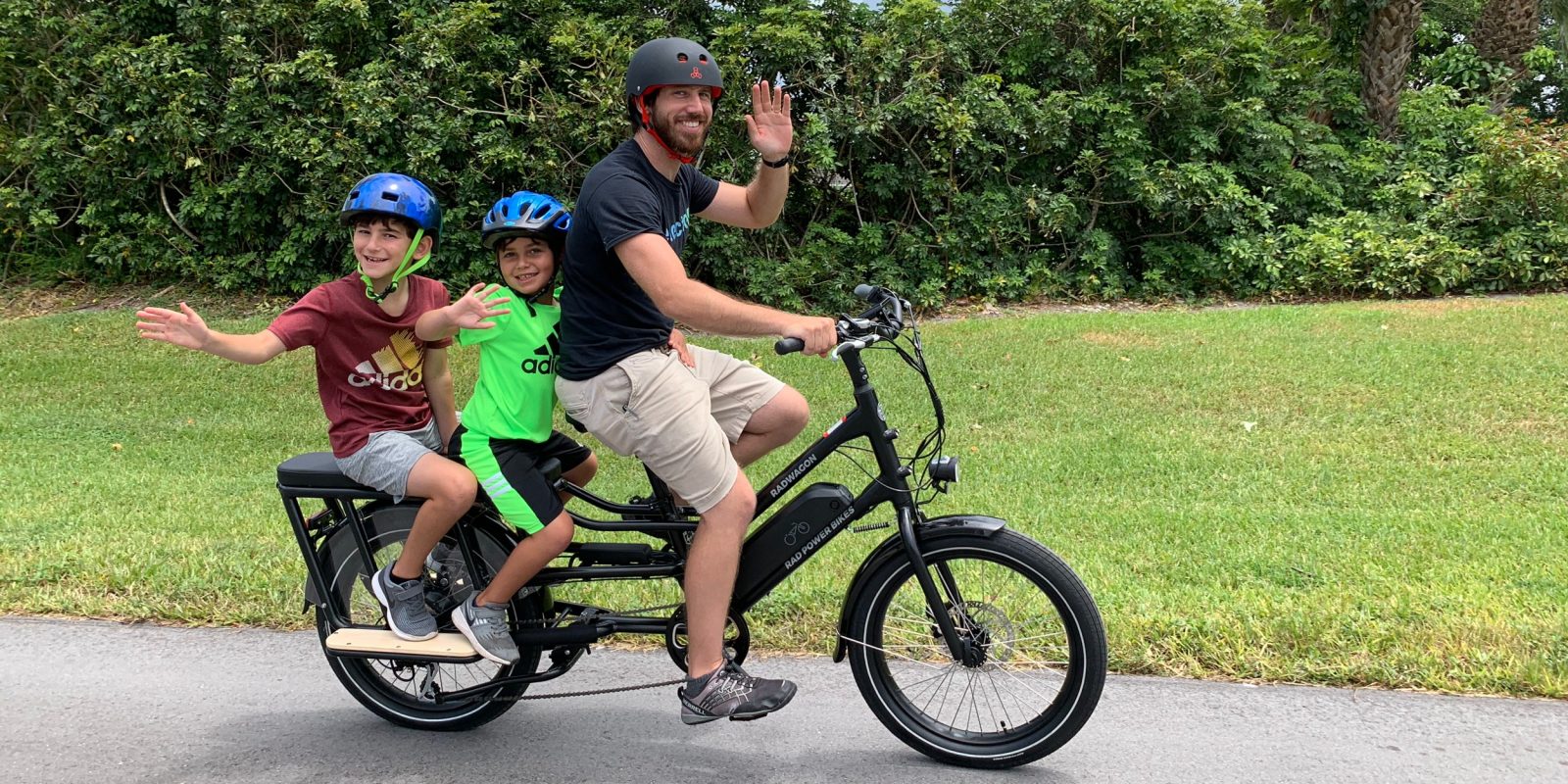 For the last few years, the RadWagon has set the benchmark for affordable, capable electric cargo bikes. But that didn’t stop Rad Power Bikes from rolling out a series of upgrades this year to make the new RadWagon 4 better than ever.

We’ve previously discussed how useful electric cargo bikes can be, with both consumers and businesses showing higher rates of e-cargo bike adoption.

Many families are finding that an electric cargo bike can replace the need for a second car (or their first car in some cities!) while many businesses have been able to reduce costs by switching to delivery via electric bicycles similar to the RadWagon 4.

The RadWagon 4 and its latest updates to the popular RadWagon platform could very well be the new standard by which budget-friendly electric cargo bikes are judged.

Check out my video review of the RadWagon 4 below, then keep reading for my detailed experiences on the bike.

Rad Power Bikes made some big changes on the RadWagon 4.

The most obvious change is a redesigned frame with smaller wheels. The wheels are both smaller diameter and wider, meaning the bike doesn’t sit quite as high and the tires have larger air volume to absorb more road shock or improve handling on less-than-ideal terrain.

The new wheel size contributes to the single largest change in the feel of the bike. While riding, the bike feels noticeably more like a traditional bike and less like a stretched cargo bike. A big part of that is due to the lower ride height. The previously taller axles and larger wheels meant the whole bike had to sit higher, including the rear rack and cargo. With the new smaller diameter wheels, the bike rides more comfortably even with the rear rack loaded down with cargo or kids (more on that in a moment).

The one downside to the new tire size is that you are now locked into Rad Power Bikes as your single tire and tube supplier. This isn’t as big of an issue when it comes to tires as some nitpickers will make it out to be. Most people don’t go through more than one pair of tires in a season. However, you’ll want to pick up a few spare tubes when you buy the RadWagon 4 since your local bike shop likely won’t stock this 22″ diameter size. And punctured tubes have a habit of popping up when we least expect them. So be prepared and grab some tubes in advance.

While the frame and wheel redesign are the most obvious changes to the RadWagon 4, there are other smaller changes that improve the performance and utility of the bike.

The new geared hub motor replaces the previous direct-drive motor. Both provide 750 W, but the new motor is torquier yet smaller. It will likely run more efficiently and be a boon on hill climbing, though it does remove the previously available regenerative braking feature.

As we’ve discussed in the past though, regenerative braking on electric bikes only adds a small amount of efficiency, and its larger benefit is usually increasing the life of brake pads instead of substantially increasing range.

The RadWagon 4 also received a new telescoping seat post. Paired with the lower frame, it offers a wide range of heights to fit riders between 5’1″ to 6’4″ (155 to 198 cm). I’m comfortably in the middle of that range and was happy as a clam. A new adjustable handlebar stem also helps riders of varying heights and arm lengths adjust the bike for the perfect fit.

As I mentioned, the ride is better than ever thanks to the smaller wheels and redesigned frame. The previous RadWagon was already a pretty good ride, but could feel a bit gangly when the high rear rack was loaded down with an adult-sized passenger or lots of cargo.

I found that while riding the RadWagon 4 without cargo on it, it basically felt like a typical e-bike during pretty much all scenarios outside of low-speed maneuvering. There’s no hiding that the bike is long, especially when wheeling it around your garage.

You should also note that there’s no suspension on the RadWagon 4. I barely noticed the lack of suspension though, even while riding on grass. The balloon-ish tires are great for road riding and I even took some grassy shortcuts that the bike handled just fine.

While testing with a few kids on the back, the new lower design performed well and kept me feeling super stable. I also opted for the running boards (which are now an accessory) and the deck pads to make sure my nephews had a nice and comfortable seat. There are also footpeg accessories if you don’t want the added bulk of wooden running boards.

In fact, there is a really wide range of accessories that can be used to completely customize the RadWagon 4 and turn it into the perfect utility or cargo bike for your needs, from grocery shopping to neighborhood carpool duty.

What about the electric side?

The RadWagon 4 continues to use largely the same tried-and-true electronics found on other Rad Power Bikes. The 672 Wh battery is larger than the industry average and should net you between 25-45 miles (40-75 km) of range depending on whether you go full throttle or like to take it easy with modest pedal assist.

In fact, the fairly standard battery across most of Rad Power Bike’s lineup offers a nice advantage if you happen to have multiple bikes. My brother-in-law rides a RadRunner and if I was planning a really long trip, I could swing by his place and “borrow” his battery for a bit, doubling my range. Rad also carries spare batteries, but what is family for if you can’t steal their stuff?

The motor is plenty powerful and gets me up to 20 mph (32 km/h) in less time than I’d expect, especially for a big bike like this. The torquey geared motor combined with the higher torque from a smaller diameter wheel means the bike can accelerate swiftly and make quick work of hills.

Final thoughts on the RadWagon 4

Rad had a few years to work on upgrades to the popular RadWagon platform and it seems like they really nailed it.

A few compromises were made in moving to a proprietary wheel size and doing away with regenerative braking, but the small tradeoffs are greatly offset by the enhanced utility and rideability of the RadWagon 4.

At just $1,599, the RadWagon is a fully-capable electric cargo bike that costs less than some non-electric cargo bikes. I still don’t understand how Rad Power Bikes can build such good e-bikes for such reasonable prices, but I’m glad they’ve somehow figured out the magic formula.