Surfing on lightning: test riding the YuJet electric surfboard, wipeouts and all! 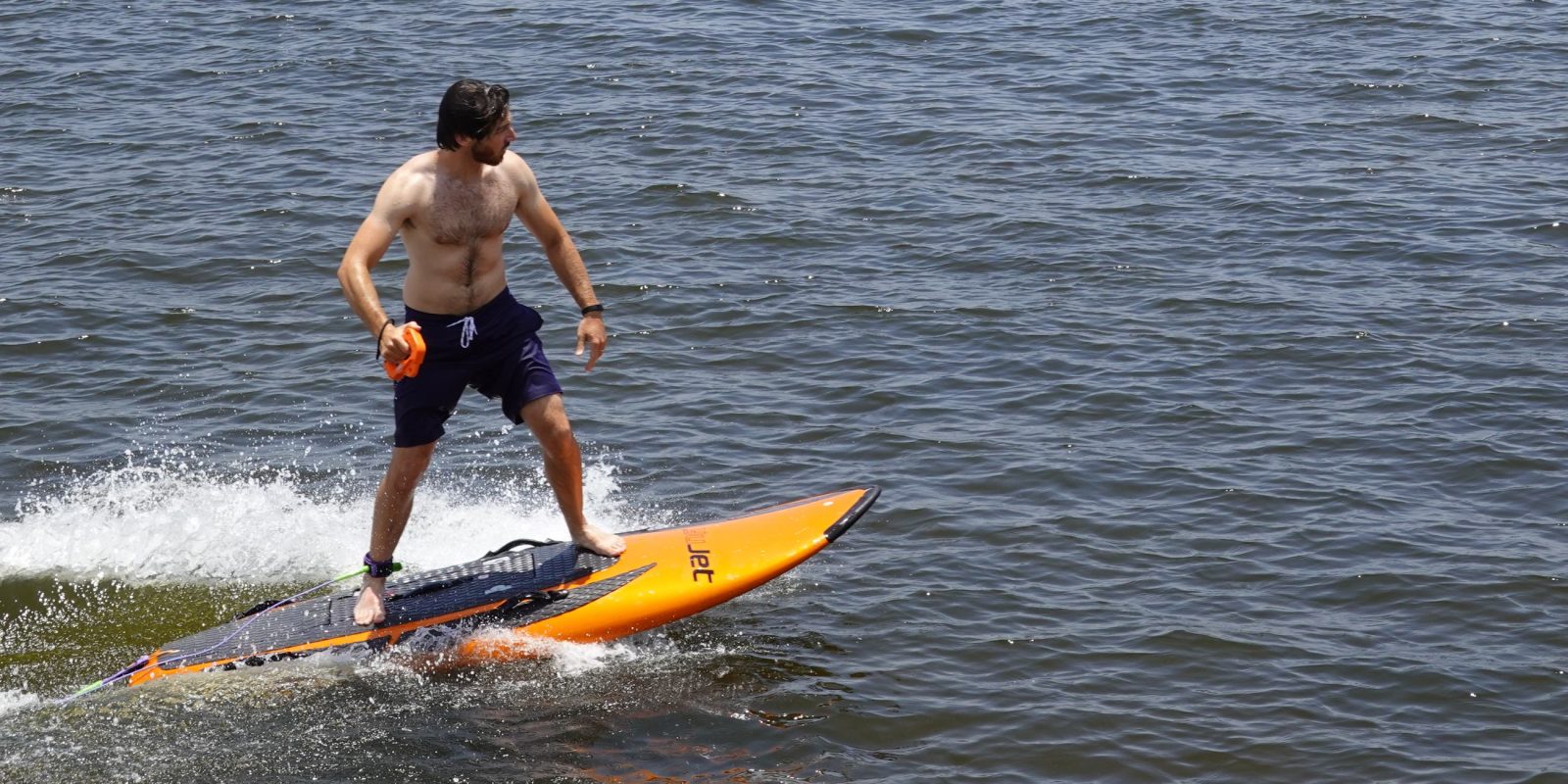 I should probably start by saying I’m not a surfer. I’ve never surfed before and I have no idea how to do it. But that didn’t stop me from jumping at the opportunity to test out YuJet’s electric surfboard, which was unveiled just last month.

After reviewing just about every other form of electric transportation from electric cars to e-bikes to e-motorcycles and e-skateboards, I knew I had to add one more notch on my e-belt, so to speak. And despite my novice surfing level, I was amazed at how easy it was to learn to ride the YuJet electric surfboard.

To be fair, I’ve previously ridden an electric surfing ‘thing’ exactly one time before.

It was an electric hydrofoil board, which acts somewhat like an electric surfboard, but has a hydrofoil underneath that lifts you out of the water. It was an awesome ride, but tricky to learn as each time the board left the water, I eventually returned in an aggressive fashion, i.e. I ragdolled mercilessly into the surface at about 15 mph (25 km/h).

So while hydrofoil boards left me feeling like they might not be the most beginner-friendly form of electric watersports, the YuJet electric surfboard was the complete opposite.

You’ll definitely want to see this board in action. Check out my video review below!

Getting my feet wet

Chad Knopp, a co-owner of YuJet, took me out and showed me the ropes for my first electric surfing experience.

I began by riding the carbon fiber board around on my stomach and then on my knees, getting a sense of the YuJet Surfer and its handheld controller.

The board features high-powered electric jet propulsion that can rocket it up to 24 mph (38.6 km/h) with a (very!) responsive throttle, so even just riding while sitting on your knees is a thrilling experience.

But of course I came out here to surf, not sit.

Next, Chad explained to me the basics of how to surf the YuJet: start seated, apply throttle via the controller, and once you get going fast, just do a pushup and land on your feet.

I watched Chad do it once, and of course he made it look like a piece of cake. “Got it,” I thought to myself. “Just look like Aquaman on vacation.“

Now it was my turn. I accepted the fact that I would of course make a fool of myself on my first try, and just went for it. The board took off with me holding on for dear life. As my speed picked up, I performed the least confident pushup of my life and quickly rose to my feet. As per Chad’s recommendation, I tried to keep the YuJet’s throttle as steady as possible under the circumstances (hey, you trying holding your index finger perfectly still while doing a floating water pushup at 10+ mph!).

As my feet hit the deck and I straightened up, something suddenly felt like it was missing. I had prepared myself for a face full of water, but instead I only had a salty mist and wind in my hair. I was surfing!

I had managed to stay up, and it wasn’t even that hard! Overconfident with my newfound Point Break skills, I cranked the throttle and took off even faster. It was incredible, something like riding my electric skateboards but a 1,000x more exhilarating!

I rolled right and let the edge of the board carve into water as I flashed Chad a thumbs up and a toothy grin. Leaning far out over the water as I carved the turn even sharper, it was just me, the board and centrifugal force all working in a beautiful balance. Then I rolled left and was quickly met by panic as I leaned backwards over water that I could no longer see as it was behind my back. My spacial awareness quickly clouded and a split second later I had that face full of water I had prepared for previously.

For what was probably only a second or two but felt like a minute, all I could see was a mixture of brackish water and bubbles. I felt the YuJet’s ankle leash tug, which at least gave me an indication of which way was up. I relaxed and waited until I bobbed to the surface, spat out a little water, and hopped back on the board. Damn, that was awesome!!!

Chad explained that my lack of confidence with making left turns (when surfing regular with right foot back) was common. It’s all fun and games when turning right and you can see the water beneath you. But it can be disorienting to perform the opposite action, leaning back over the water trust fall-style. It takes time to build up familiarity with the board and turning on water.

He showed me how I could start by gripping the outer grab handle and leaning back in a squat, which also helped me make tighter turns.

I also felt like it made me look more experienced than I was, which was an added bonus.

I spent the next half hour or so making progressively faster runs, seeking out wakes of passing boats, and testing out my turning skills. I still had a few more wipeouts at various speeds, but I considered that acceptable since it was my first time riding.

I spent about an hour on the YuJet electric surfboard until I had drained the battery, though some of that time was spent chilling and talking to Chad about surfing pointers. The company says a 40 minute run-time is pretty standard, and users can swap in a freshly charged battery to add more riding time.

This obviously isn’t an impulse purchase, though the price is significantly more affordable than some other high-end electric surfboards out there.

The YuJet Surfer also holds a number of advantages over other personal watercraft like jet skis.

The YuJet weighs just 20 lb (9 kg) without the battery and can be easily loaded into a trunk bed or perhaps even the back of a car, depending on your seat setup. If you’ve got a lake on your property, you could literally carry the board right down to the water.

YuJet is also targeting boat owners who could keep a board on their yacht along with a few spare batteries for an entire afternoon of fun.

So while the YuJet surfer obviously has a very limited market, it shows how the technology is advancing quickly and how prices are already dropping. That’s good news for what’s to come over the next few years.

And for those of us that don’t own our own yacht, if you’re ever on vacation and see an opportunity to do a YuJet rental, I highly recommend it!