Exway Flex electric skateboard review: Better than Boosted at half the price? 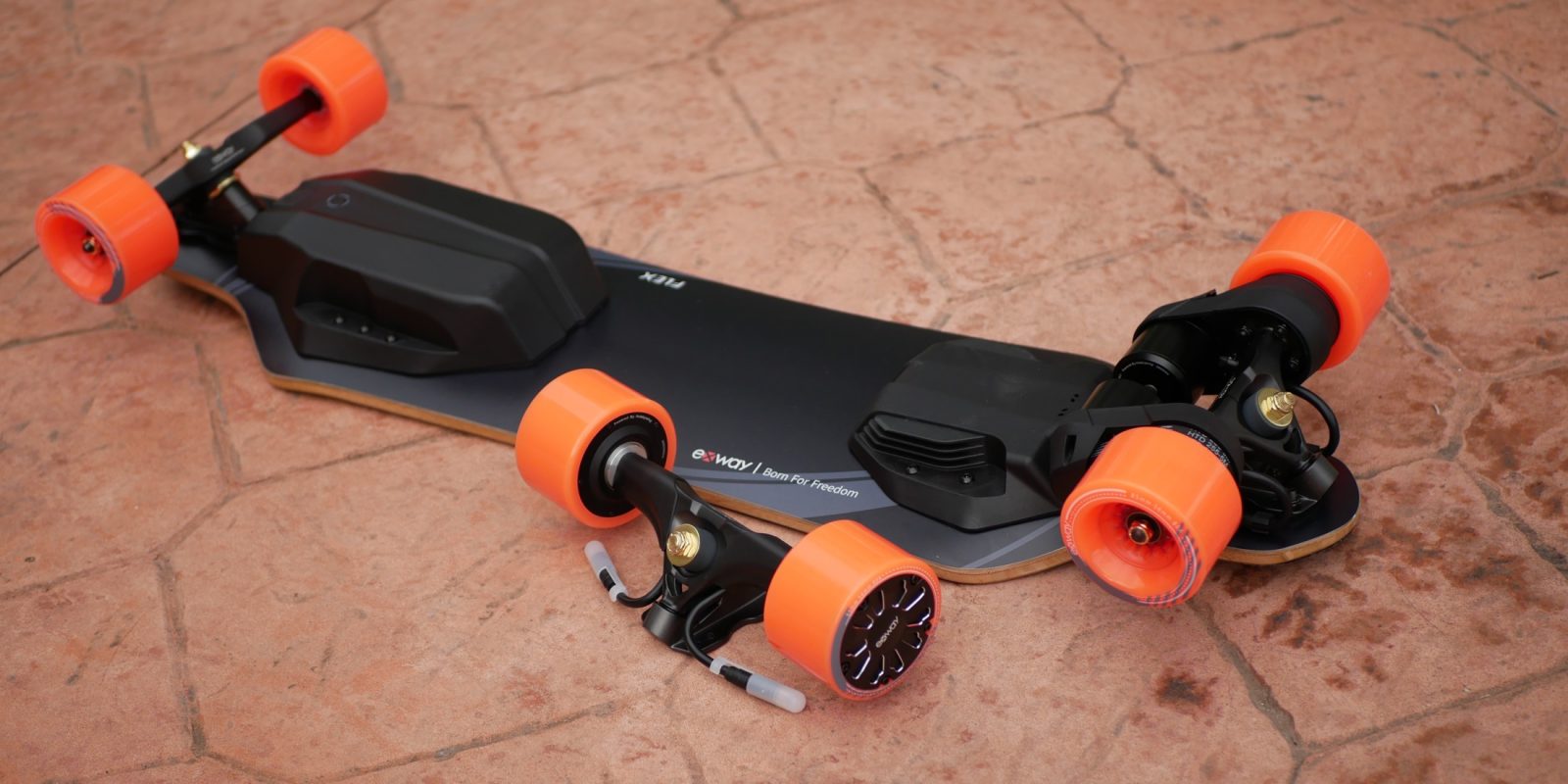 Exway sent me an early release of their upcoming Exway Flex electric skateboard to test out. And it freakin’ rocks, people. Plus, it’s actually affordable compared to the major premium boards out there, starting at just $649.

If I was Boosted or any other premium e-skateboard brand, I’d be worried.

Check me out test riding on the Exway Flex in the video below. Then keep reading to hear my first impressions on this new budget electric skateboard.

I’ve only had the board for a bit under a week so far, but I’ve been having a blast on it so far. And now I’m excited to share my first impressions with you.

To put it in one sentence: Exway did an amazing job with this board and it should scare other manufacturers.

As someone who loves the Exway X1 Pro with its smooth deck bottom, I wasn’t sure how I’d feel about going back to the standard double-bump-bottom of most electric skateboards, where the batteries are housed in one enclosure at the back of the board and the electronic speed controller (ESC) is housed in a second enclosure at the front of the board. But the comfort and ride improvement of the flexy and aggressively contoured deck makes for a great ride.

But there’s more to the Exway Flex (the Flexway?) than just a flexy deck. The board actually features a number of impressive upgrades.

The battery comes with a new Smart BMS that can provide more consistent battery voltage readouts on the controller, something I’ve already noticed. My Exway X1 Pro’s controller shows a decent sized battery capacity drop under hard acceleration that returns once you ease up on the throttle, but the Exway Flex has more consistent battery readings. The new battery also automatically discharges itself to the proper storage level when it’s left unused for more than a few days, which is healthier for the battery and safer in the long run.

The board is IP68 rated meaning you can ride through puddles or light rain without ruining your board’s electronics – though I still wouldn’t recommend it. The electronics might be fine, but skating in wet conditions can be very dangerous. I’ve only wrecked on an electric skateboard once (so far) and it was water-related. And stupidity-related. But the puddle didn’t help.

Next, Exway debuted its new in-house trucks that it developed known as the Trist truck. These 8-inch forged CNC’d trucks not only look good but perform great as well. 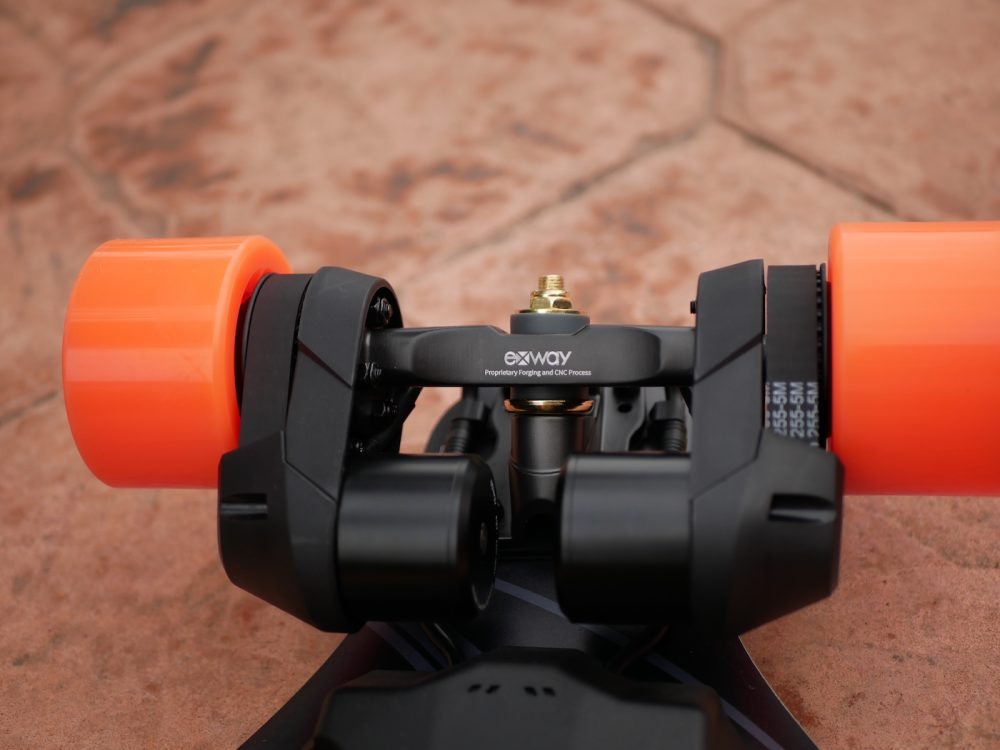 Braking is awesome and certainly more powerful than I expected. I almost went off the front end when I did my first hard braking test. The one weird thing I did notice about braking though was that when I got near an empty battery, the braking power declined. That shouldn’t really happen, as the regen braking should be able to dump just as much power into an empty battery as it does to a nearly full battery (and in fact, theoretically it should be able to dump even more power into a depleted battery). Exway says this is going to be fixed with a simple firmware update though, and I guess that’s one of the downsides of riding a prototype board – you become the guinea pig.

When it comes to power, the Exway Flex has it, though it’s not insane. This is one area where Boosted is safe. I found the Boosted Stealth to have great hill climbing and acceleration power that outclasses the Exway Flex. But it’s not like the Exway Flex is thaaaat far behind though. Keep in mind this is a budget board in the US$649 to US$699 territory, depending on if you get the hub motors (cheaper) or Riot kit ($50 more expensive). So if it’s got almost as much power but costs less than half as much, then that’s a win in my book.

The range is adequate at around 20 km or 12 miles. That’s the range I was getting while averaging speeds of around 21-ish mph (34 km/h). Exway advertises a range of 20 miles or 32 km for the Flex, but that’s got to be if you’re riding around at half the speed that I was. With a tailwind.

I wish they’d just give a real world range, but I understand that when most manufacturers give “best possible scenario” ranges, no one wants to be the first to give a real world range and look like an inferior product. But with a 259Wh battery, the board gets decent range and you can get at least 10 miles with hard riding, or more with casual riding.

Regarding motor options, you can go with either the new Riot kit (belt drive motors) or the new hub motors. Both are slightly redesigned. I have all of my riding on the Riot kit for now but will get some experience on the hubs and report back. I have the Exway hubs on my X1 Pro though and already know that I love them, so I wanted to try out the belt drive now for a bit of a change.

While I normally don’t like belt drive because of what I perceive as the drawbacks (more points of possible failure and louder operation), the Exway Flex goes part of the way there towards addressing those concerns. The new Riot kit is quieter than the old one – though it is by no means quiet. You’ll still hear the whine, but it doesn’t detract from the ride the way the old one did for me. And for strength, Exway upgraded to a 15mm wide belt instead of the old 10mm belt. That just makes it more durable and robust. 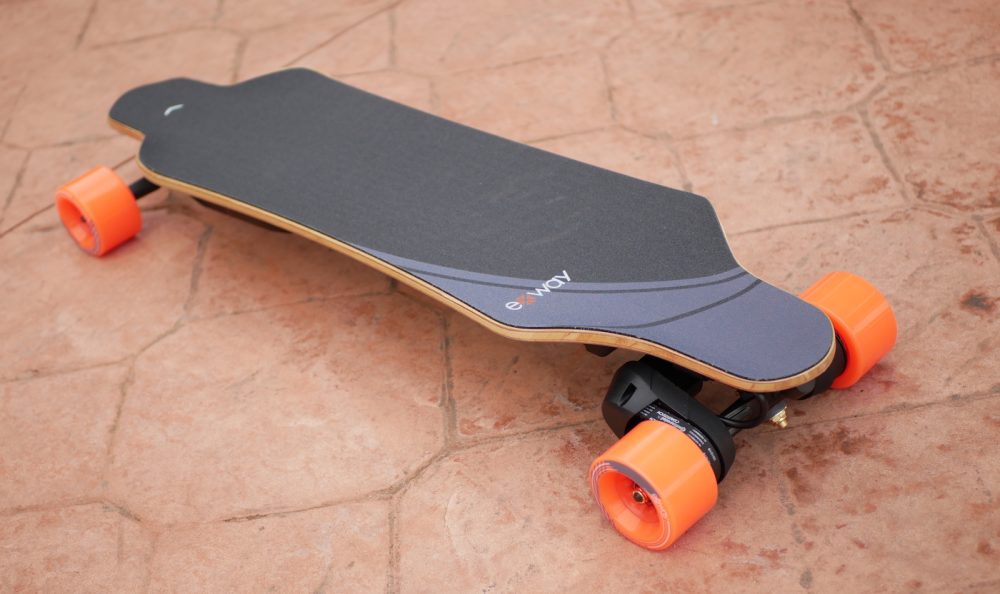 Also, and I have no way to prove this, but I suspect that the wider belt drops the pitch of the belt noise a bit, making it less high-pitched and less annoying. Again, it’s slightly quieter, but I feel like it also just gets into your headless, which I attribute to perhaps the wider belt changing the sound a bit.

All in all, I think the Exway Flex is an awesome board. It has great upgrades, a comfortable deck, strong braking, great throttle response and is a steal at $649 to $699.

Seriously, the other manufacturers are going to need to scramble to produce something better than this.

I’ll admit that I miss the flat deck of my Exway X1 Pro, largely because it just makes the board such a pleasure to carry with you. But the X1 Pro remains Exway’s more premium electric skateboard. And I can see giving up the sexy, thin deck profile for the advantages of the flexy deck and the ability to swap batteries. Everything is a compromise in this industry, but that’s a pretty fair one in my book.

Don’t get too excited just yet though. To grab an Exway Flex for yourself you’ll have to wait until sales open on February 15th. In the meantime, let us know what you think of the board in the comments section below!