The Lift eFoil is part of the small but growing electric watersports market. It’s basically an electric surfboard with hydrofoil that lets you raise up out of the water and glide along like a silent, airborne dolphin. The sleek and expertly engineered board is really something special and unlike anything I’ve ridden before. Read on and check out the video below to see how my test ride went, and what makes the eFoil such an awesome ride.

Electrek got invited out by TechWeWant to test out their eFoil board from Lift.

And as much of a bummer as working on the weekend is, I took one for the team and suited up in my board shorts to give this thing a whirl.

I should note that I’ve never ridden an electric hydrofoil board before. Nor have I ever surfed. I went water skiing once when I was 15, but that’s the closest I’ve come to anything like this before. So needless to say, I wasn’t overly confident going in. But I figured I’d give it the ol’ college try. How often do you get to ride a $12,000 American-made electric hydrofoil? 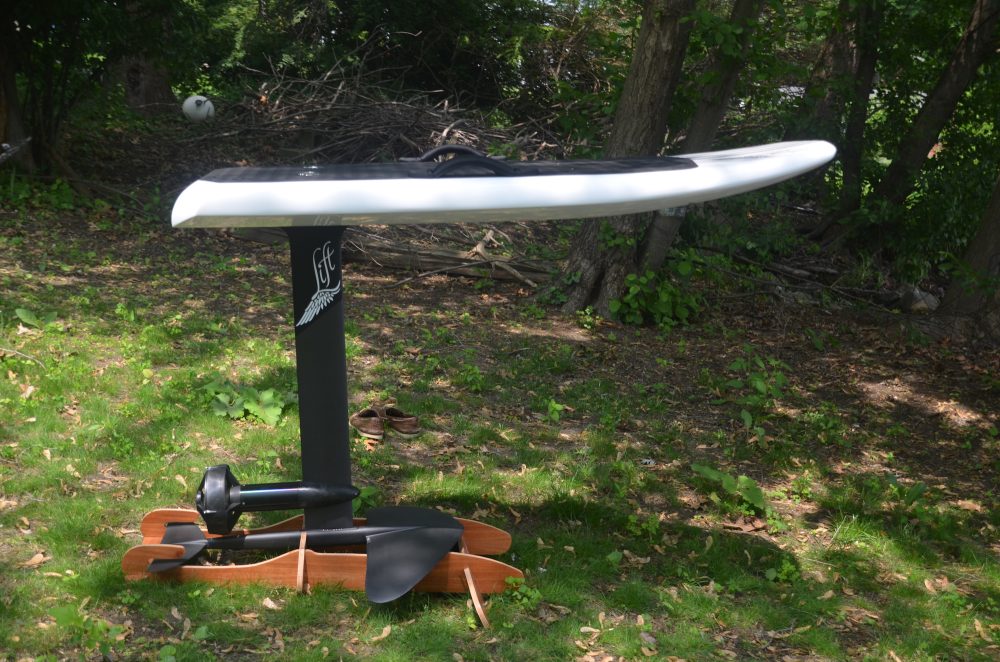 The eFoil waiting for my ride

With something like the Lift eFoil, words and pictures only go so far. Seeing it in action really gives you a better sense of the board. Check out the video below to see me riding (and crashing) the board, then read on for all of the details!

The Lift eFoil board

Checking out the board in advance, I was quite impressed. The entire board and foil are 100% premium carbon fiber. The inner compartment is entirely waterproof, but the battery and all connections inside are also waterproof to serve as extra redundancy. The sealed controller is water cooled using an inlet down by the motor. The 2 kWh battery is fully submersible, just in case you ever removed it and dropped it overboard, I guess.

That battery is built by Lithos Energy, a battery design company founded by Tesla engineers.

The charger is gigantic, but can fill the battery in just 2 hours.

Beneath the board, the eFoil has a nearly 1 meter (3 ft) strut supporting its hydrofoil at the base. Just above the foil is the silent, submersible and maintenance-free motor.

Its propeller is machined out of a solid block of aluminum and is hand balanced to ensure the highest efficiency and thrust.

The hand controller uses Bluetooth connectivity and is submersible, though it also floats in case it is dropped. The screen is easy to read, even while flying across the water surface. It features a power governor with three different settings for varying riding experiences.

I know it can be hard to assess quality in pictures, but the board is incredibly well-designed and manufactured. The carbon fiber is perfect. The hardware is of very high marine grade. The foam and rubber are all heavy-duty and properly designed for the environment. The craftsmanship here is simply second to none — you can tell the company takes pride in its work.

I could admire the Lift eFoil all day, but I’d rather be riding. Greg Vanthong, the founder of TechWeWant, gave me a quick intro that proved to be very helpful. Basically, you start by laying on the board, keeping your weight toward the front of the board. As you squeeze the throttle and pick up speed, you transition to your knees. Then you stand up, again trying to keep your feet with your weight shifted forward. During each transition it is critical to keep a steady amount of throttle applied, which keeps the board stable. Sounds easy, right?

I started out on my stomach and got comfortable tootling around for five minutes like that. Even just riding it like a boogie board, the eFoil is super fun. It drags you around effortlessly, and I could really feel the power. It takes off smoothly if you give it gentle throttle, but rockets off as soon as you squeeze the throttle quickly. 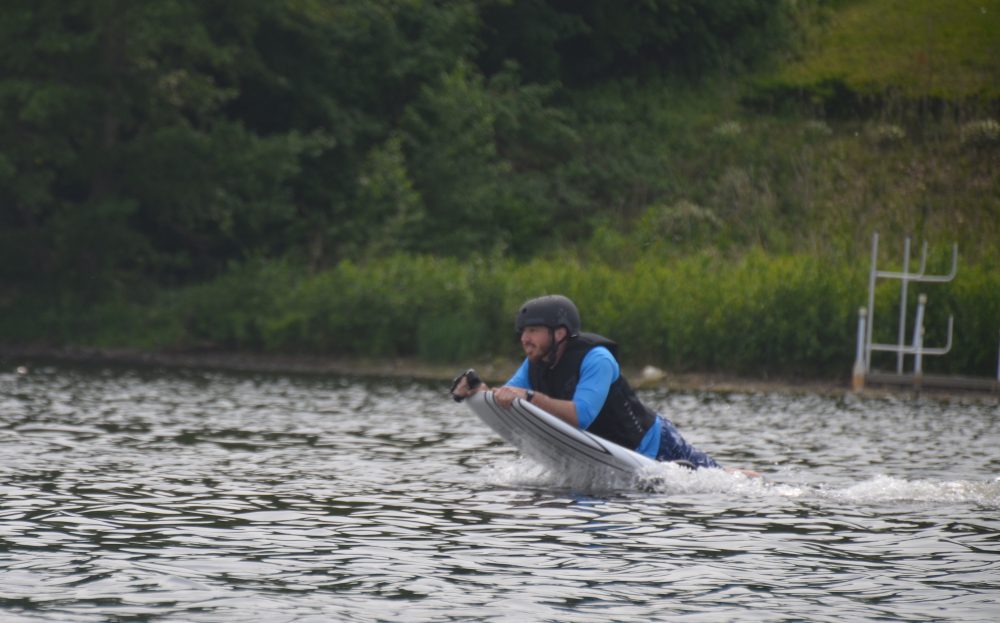 I got comfortable leaning and making sharp turns before I took it up a notch. I rose to my knees and immediately found out why you need to keep the throttle steady. It’s not like an electric bicycle, where releasing the throttle means you just coast along at almost the same speed. This is water, and without the throttle applied you come to a stop very quickly. I almost slipped off the front before I came back on the throttle and tried to keep it steady.

Once I focused on keeping the throttle steady, I could easily move to my knees. From there, I rode around for a while just like that, on my knees, having a blast and feeling like the coolest kid on the lake. Because I was. Those kayakers in the distance had nothing on me and my Lift eFoil!

While transitioning to the knees was pretty easy, the next step was anything but. Standing up may sound easy, but you have to focus on maintaining balance on a moving, floating object while simultaneously holding the throttle steady. It took me a couple of tries before I got it.

Within about 15-20 minutes I had gone from never seeing an electric hydrofoil to successfully standing up and riding one. I think that says more about the board than me, but I’ll take any compliments that come my way. 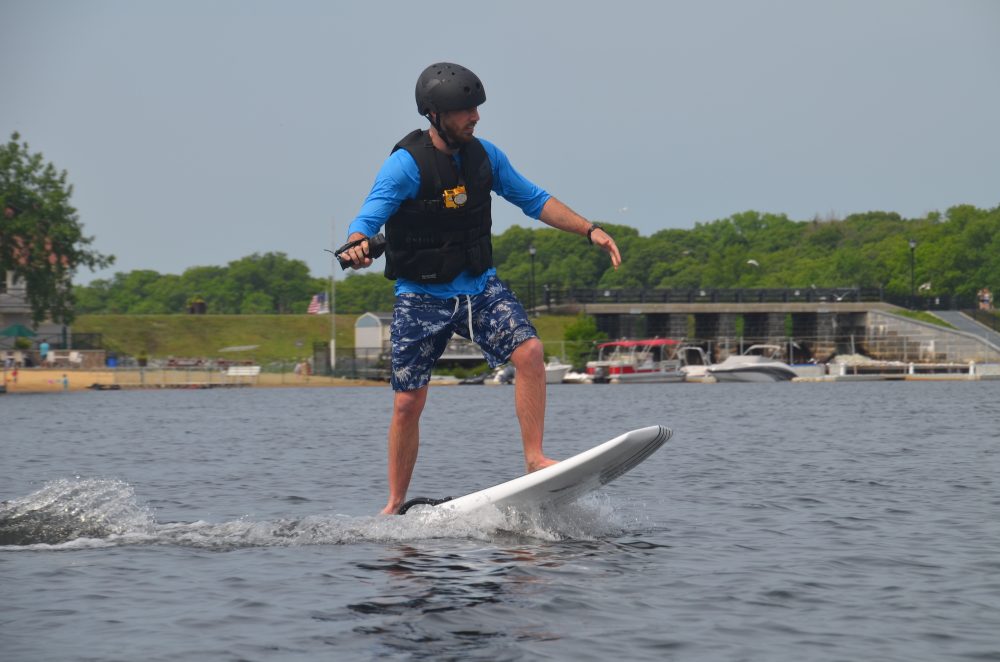 And while riding the eFoil while standing was awesome, that wasn’t the last step. At this point, I was basically surfing, not foiling.

The board was on the surface and I was leaving a wake. I could hear the water splashing around me as I cruised over the water surface, and performing a 180º turn meant crossing back over my wake.

But as I increased the speed even faster, something amazing happened. Suddenly, the water underneath started to drop away, the splashing stopped and the board went completely silent, leaving no wake. I was flying! 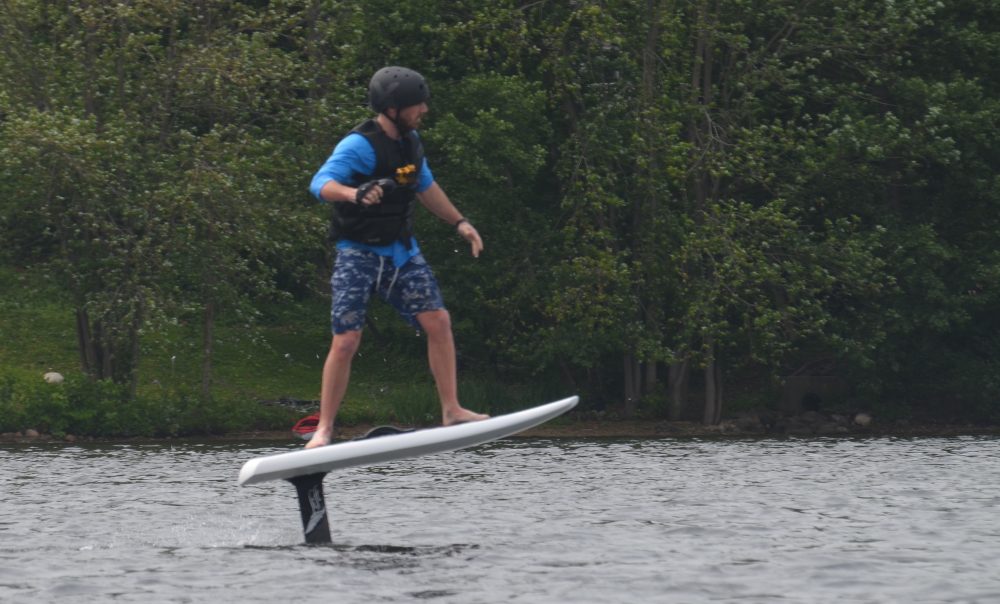 Flying for a second, that is. As soon as I realized what was happening and I felt the water disappear out from under me, my brain kind of freaked out and I released the throttle to slow down. But releasing the throttle basically stops you.

Issac Newton’s unrelenting laws of physics kept my body going at its current speed as I rocketed forward and met the water’s surface in the least graceful rag doll motion I’ve ever experienced.

The crash was unpleasant but the thrill leading up to it was worth it. And like that, I was an eFoiler!

I spent the next half hour or so repeatedly practicing the transition to standing and then foiling. I found that by playing with my weight balance, I could move weight to my rear leg and allow the board to rise up out of the water and start foiling. Then I could move weight back toward my front foot and lower the board back down to the water. By playing with the balance, I could foil at different heights.

I have to admit that I never became great at it. I spent nearly an hour riding and had around 10 encounters with the water at various rates of speed. While surfing, the eFoil felt largely like riding my electric skateboards. But once you rise up and start foiling, the dynamics of the board change and you are really flying. The board feels different and that takes some getting used to. I could maintain it for a while, but once I got going pretty fast, I would inevitably get the speed wobbles and end up bailing, sometimes on purpose and sometimes by surprise. 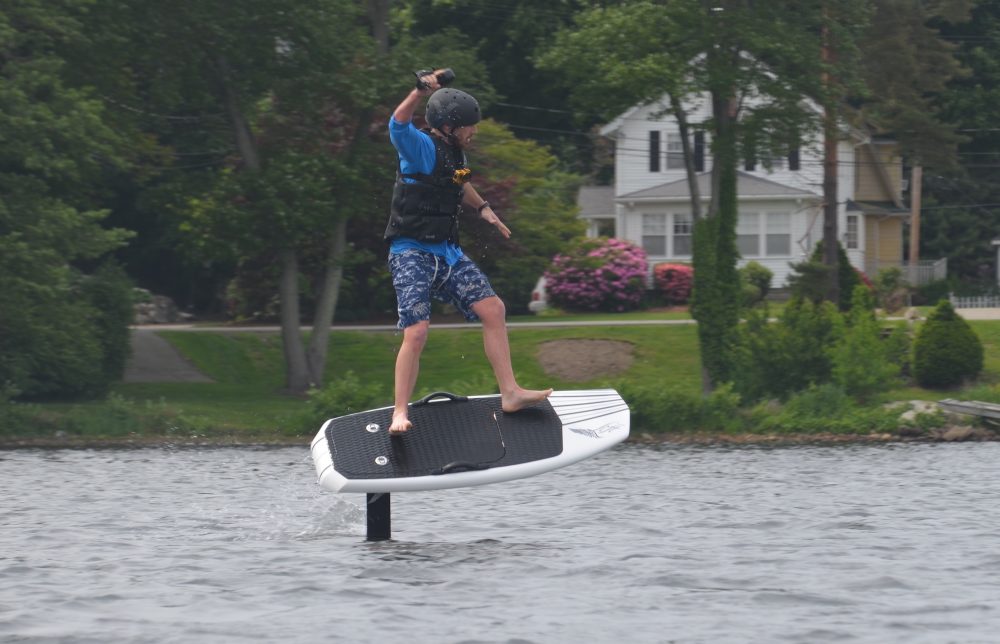 The beginning of an accidental bail. It looks almost peaceful, but the next half-second was anything but…

The process felt a bit like when I learned to ride an electric unicycle. In the beginning you simply hop on and fall off a number of times until your brain and muscles can figure out the subconscious communications necessary to make the process work. Once it clicks in your head, you basically relinquish control and let your body figure it out. It’s kind of like riding a bike, where you don’t have to think about turning the handlebars to balance — your body just does it. Except that riding an eFoil is such a different type of balance that it takes the brain a bit longer to figure it out.

But with just an hour of riding I became reasonably confident on the board. With a few more hours, I believe I could actually be half decent. Even with my amateur riding ability, the eFoil was a blast to ride.

While the eFoil is rated for an hour of riding, my hour only dropped the battery from 90% to 25%. But I spent a decent amount of time flailing my way towards a splashdown, so continuous riding is likely to use more battery than I did. With swappable batteries, you could theoretically keep a second one around so that one battery is always charging while the other is being used.

Is it worth it?

Sure, $12,000 is a lot of money to throw at a water toy, even considering it is made in America, but I can totally see why someone would get one. If you live by the water and want to enjoy watersports, you can get a similar thrill to a jet ski or water skiing, without the equipment. You don’t have to pay dock fees or own a money pit of a boat. You can literally carry the 55 lb. (25 kg) eFoil right down to the water — no truck or trailer necessary. 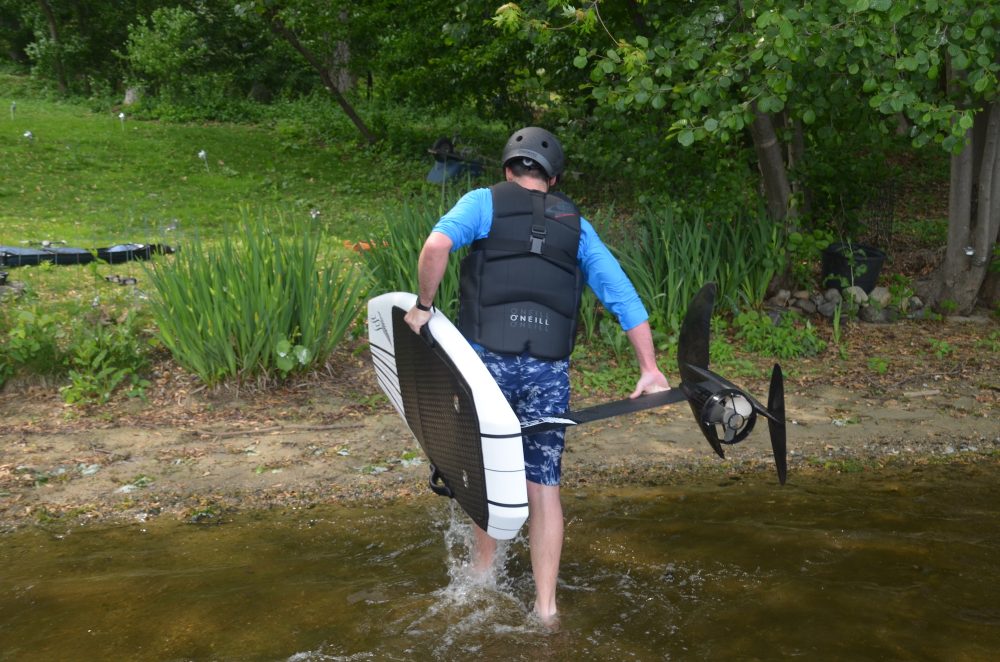 You just get a sleek, silent and thrilling electric watersport experience.

I don’t have a yacht and I don’t have $12,000 burning a hole in my pocket. But if I had both, I would surely be putting the eFoil on my yacht for some awesome fun on a lake or in the bay.

But short of that, a big thanks goes out to the team at TechWeWant for hooking me up with the Lift eFoil and showing me the ropes. Make sure you check them out on YouTube where they have their own video on the eFoil.