The new Renault ZOE is here, and I got a chance to test drive it this weekend in Sardinia, Italy. If you thought you knew the ZOE then think again, because Renault has upgraded the New ZOE with better range, power, and charging options, plus a number of other changes. Check it all out below.

The previous version of the Renault ZOE, known as the ZOE Z.E. 40, was released in 2016. That car has already sold like hot cakes in Europe, with over 250,000 ZOEs sold. The car’s popularity grew quickly, with many years showing around 50% growth in sales YoY.

The ZOE eventually became the highest-selling electric car in many markets before the introduction of the Model 3 earlier this year. And even after the Model 3 was introduced, the ZOE held on to an impressive amount of market share.

But now three years later, the ZOE is beginning to show its age. Fortunately though, Renault is back to give us the ZOE updates we’ve wanted and has done so building on its 10 years of experience in the electric car market.

The New ZOE comes with a number of updates and upgrades, yet has managed to maintain the same price. In most markets, the car costs around €23,000 without the battery (which customers can pay a monthly rate towards), or around €30,000 with the battery, though the price varies a bit according to the country.

Check out my review video below, then read on for more details about the test drive experience!

The motor has been increased from 80 kW to 100 kW, though I saw peaks of around 106 to 110 kW of power while planting the pedal to the floor.

In Electrek’s last test drive of the previous version of the ZOE during the Paris Motor Show, we came away a bit underwhelmed with the motor power. But after driving the New ZOE, I’d say I’m quite… whelmed. The power isn’t overwhelming, but it’s enough to bring a smile to your face. I never felt like I needed more power and I could easily overtake cars quickly or zoom up steep mountain roads. It was even enough to send my improperly secured camera flying into the back seat while flooring it during my video review above.

Is it scary power like the Model 3? Not quite. But it’s a big improvement over the previous ZOE and it feels like all the power a car reasonably needs. 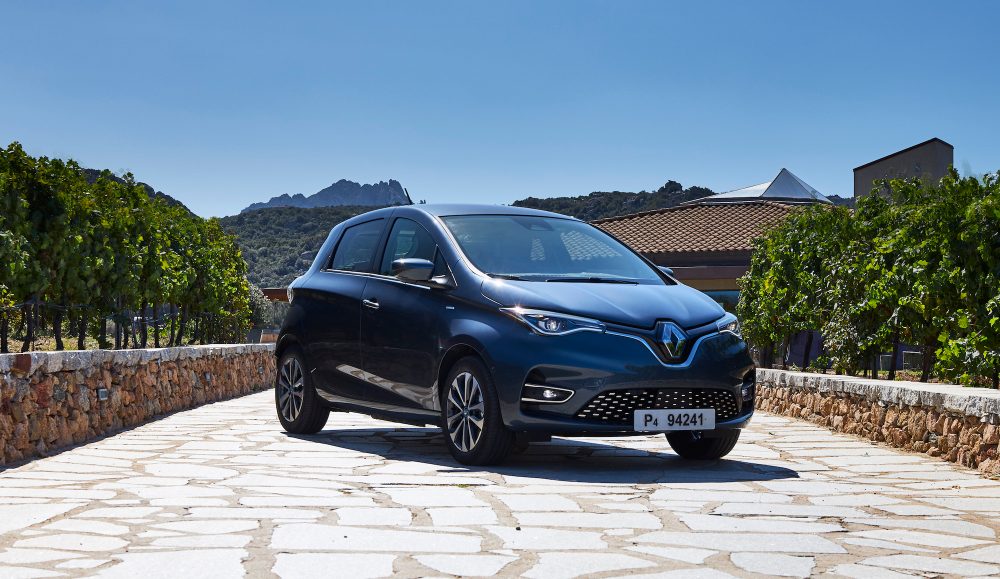 That larger capacity battery actually fits in the same housing as the previous battery and thus takes up no extra room in the car. Instead, it was achieved largely through optimizing the architecture of the battery to pack in more cells, as well as a small amount of chemical optimization as well with slightly more energy dense cells.

The battery is still air-cooled, but this isn’t passive air-cooling like the Nissan Leaf. The New ZOE uses the car’s air condition system to blow cool air over the battery and suck out heat. The larger battery pack also means less load on the battery compared to the previous smaller battery during everyday driving scenarios.

And with a new, bigger battery this year comes new charging in the form of CCS (Combined Charging System). The AC charging power remains an impressive 22 kWh, while the car was gifted a new 50 kW DC charging system.

This is probably the one area where I would have liked to have seen more from Renault. With so many cars capable of 100 kW charging these days, it’s a bit of a shame to see just 50 kW in the New ZOE.

That being said, while I’d love to be able to do a 0-80% charge in around 30 minutes with a 100 kW charger, I still think that the 50 kW charger will be perfectly fine for most people. Yes, that same 0-80% charge is going to take a bit over an hour now with the 50 kW charger, but the number of people who rely on DC fast charging on a day to day basis is small. Most people will be able to charge at home or use 22 kW public chargers to still get speedy charging compared to other cars. Heck, the Model 3 only has half of the AC charging rate of the New ZOE, coming in at 11 kW. 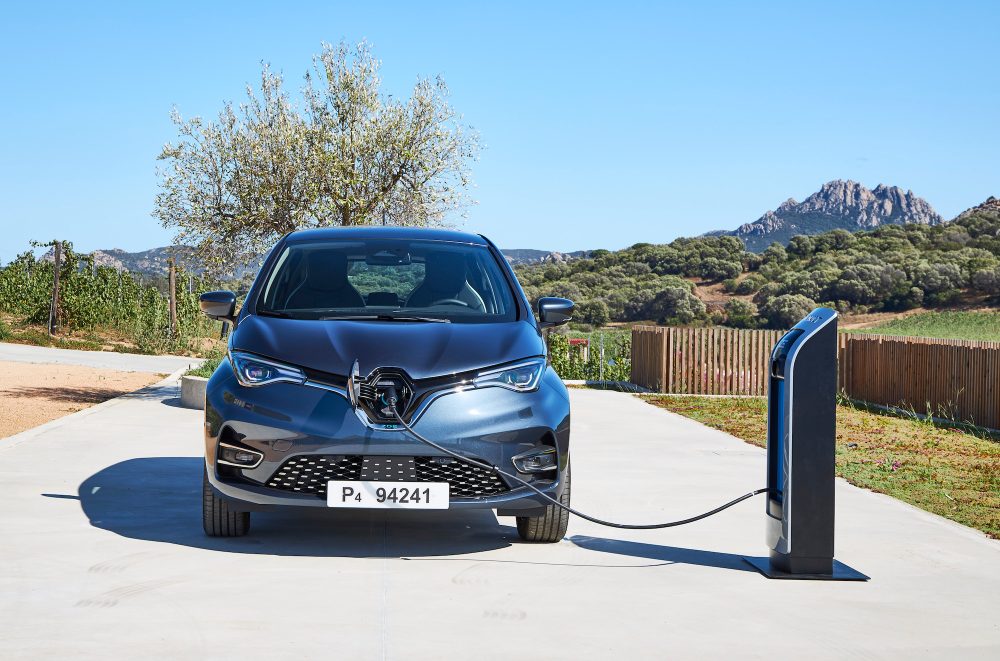 Considering that the New ZOE is positioned as a suburban car, being able to add 120 km (75 mi) of range in an hour on a 22 kW public charging station is pretty impressive. Even apartment dwellers without a home charging option can probably get away just fine with occasional charges while at the shopping mall or grocery store. While 22 kW public chargers might not be found on every North American street corner yet, they appear to be more common in Europe.

And if you absolutely must DC fast charge every day, then perhaps the New ZOE just isn’t the car for you. Or you’ll just have to tack on an extra 30 minutes to your day. Your choice.

Other additions to the look and feel

The New ZOE also gets a number of aesthetic updates.

Externally, you’ll find a new front fascia and hood. Gone is the cute, rounded look of the previous ZOE. As a Renault executive described it to me, the company’s goal with the redesign was for the New ZOE to take on a bit of a more masculine, angular look up front. And as un-woke as that may be today, I’d tend to agree that the company succeeded.

Don’t get me wrong, it’s still a cute car. It’s just not quite as bubbly cute as it used to be.

The New ZOE also gets updated 100% LED lighting throughout the car. The front fog lights even corner with the car to lead the way in turns. And I particularly like the new tail lights. The rear turn indicator is the strip in the middle of the tail light, and it lights up in an animated fashion from one side to the other, pointing in the direction of the turn. I feel like I can do without the animation of the turn signals, as they feel a bit futuristic to me. But the design of the turn signals does look kind of cool though, so I’m torn there.

The interior is also getting some interesting new changes. Up front, we’ve got a new center display, available in either 7-inch or 9.3-inch screens. I had the 9.3 inch screen in my ZOE and it was wonderful. The GPS navigation looks great full screen, but you can also run it half screen to keep access to other info or controls on the bottom half of the screen.

And the instrument cluster gets a beautiful new 10-inch screen which is fully customizable to show navigation, driving data, energy efficiency, or other users selectable screens. 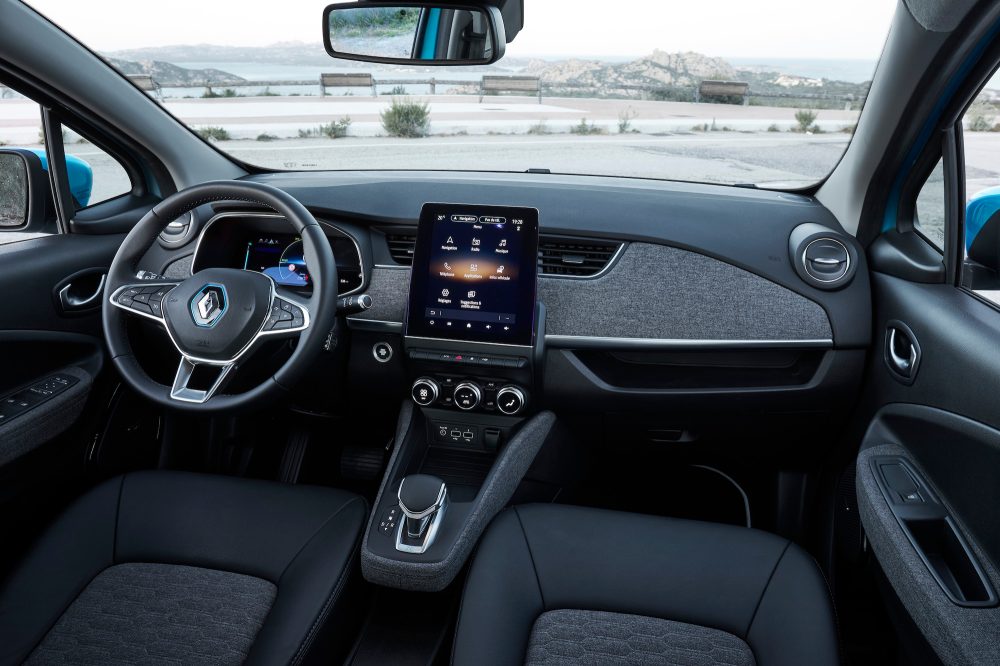 Even the upholstery gets an interesting upgrade this year, with recycled materials included in the manufacturing. The recycled upholstery uses old car seat belts and other automotive textiles, resulting in a surprisingly soft and comfortable fabric.

I came away quite impressed from my two days of driving the New ZOE. It’s an incredibly efficient car that has plenty of range for the average driver and enough power for any driving situation. It’s not going to knock your socks off in the power department, but it’s still got everything you need.

I would have called the car perfect if it came with 100 kW DC charging, but I’m still happy with the 50 kW charger.

And the cockpit gives me everything I’d want in terms of controls, comfort and customization — perhaps even overdelivering on what I would have expected from a car of this price.

Renault came into this with high expectations from the public based on the previous ZOE’s popularity. And I think they’ve met or exceeded those expectations in nearly every category. The New ZOE should compete well for the next few years. And perhaps eventually we’ll be gifted with the 100 kW charging that many people still want.

Until then, I’ll buy a coffee and check my email while I finish charging.