The top 5 electric mopeds we’ve tested (and you need to see!) for summer 2020 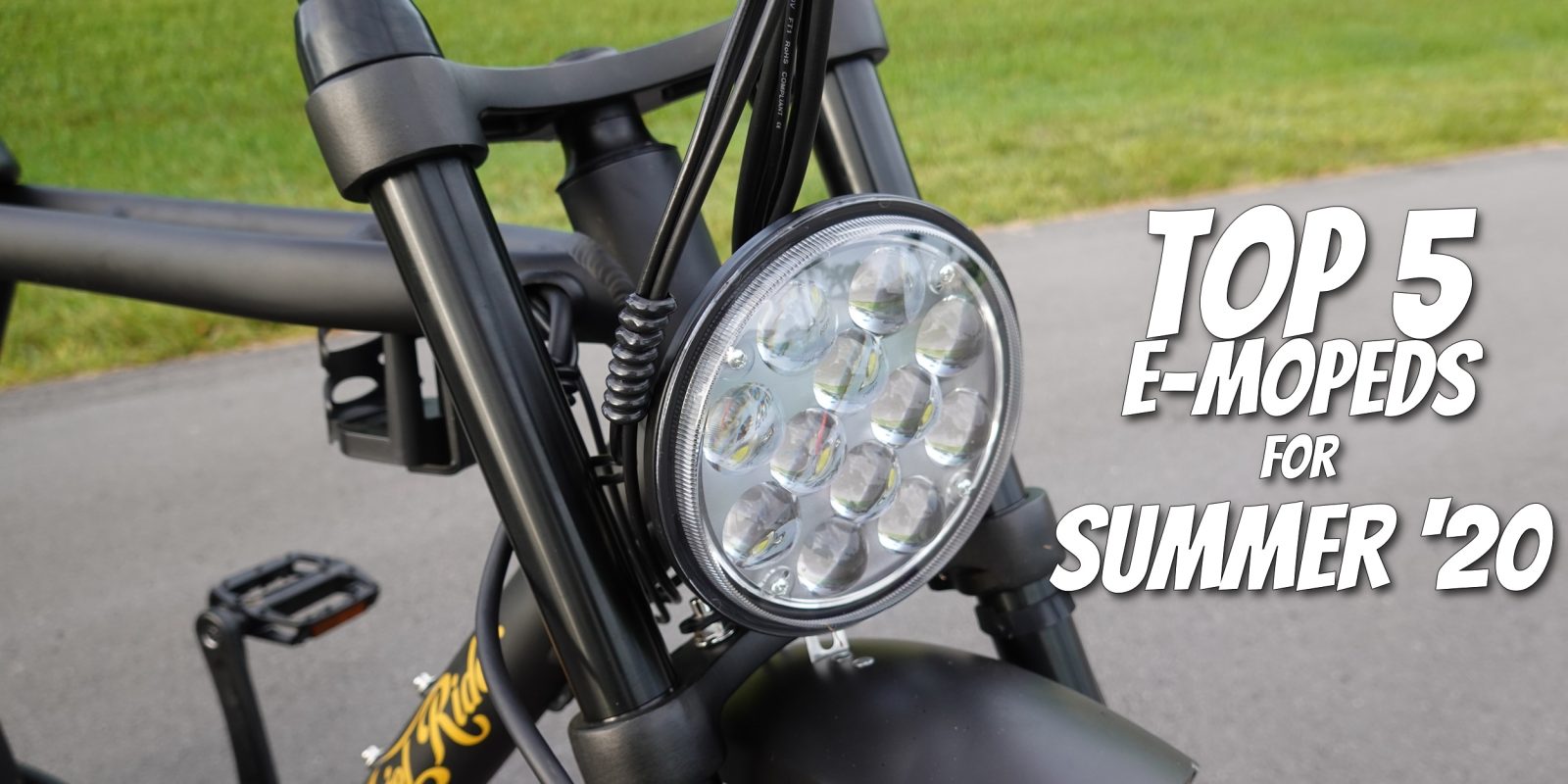 The moped or minibike form factor for e-bikes has become a breakout success this year. A wave of new models has poured out from every corner of the e-bike industry, giving us exciting new options to choose from. I’ve been fortunate enough to test a pile of these types of e-bikes, and now I’m compiling my list of the Top 5 that you need to see!

This is part of a Top 5 E-Bikes for Sumer 2020 series that we’re currently running to help introduce our readers to some great e-bikes to hit the road or trail this summer.

Stick around over the next few days to see our choices for the following categories of electric bikes:

And be sure to check out our video below that showcases all of the electric mopeds in this list in action.

First up we have the ONYX RCR, which is definitely the leader of the pack right now when it comes to high power and high-speed electric mopeds.

The RCR is somehow perpetually on backorder since the company can’t seem to produce them as fast as they can sell them, despite having two California factories and being in business for two years now.

But the bike is worth the wait, as it can hit nearly 60 mph or 100 km/h thanks to its 3 kW continuous rear hub motor that puts out around 5.5 kW of peak power. I got it up to 59 mph myself, and the bike felt rock solid and stable.

A big part of that is the design. The frame was created by leading modern-day moped designer Tim Seward and is based on the classic Puch frames. I even took the RCR off-roading for a bit and found the ride to be quite good for such a simple little bike.

Range is super variable and will depend on whether you’re scooting around town at 20 mph (32 km/h), or zipping up those canyon roads at 60 mph (100 km/h). In the city at 20 mph, Onyx says you’ll get a maximum of 75 miles (120 km) of range. But expect that to drop off steeply once you lay heavily on the throttle.

When it comes to the RCR’s pedals, they’re mostly vestigial and there to keep the bike quasi-legal. Sure, you can pedal it, but it’s not a comfortable or fun bike to pedal. Those pedals are basically footrests for all intents and purposes. Plus at the speeds this thing can hit, you won’t be able to keep up with the pedals most of the time.

In addition to being the fastest moped on this list, it’s also the most expensive. There’s no sale right now, so its priced at its full MSRP of $4,149, plus shipping. And while that’s pretty pricey, the fact that there’s such a long waiting list shows that people are still lining up to fork it over for an RCR.

If you want to learn more about the RCR in detail, check out my full-length ONYX RCR review or watch my review video below.

Next we’re going in a different direction, the humble little RadRunner from Rad Power Bikes.

This cute little thing isn’t particularly fast, at just 20 mph (32 km/h), but it’s a hell of a lot more affordable than the ONYX RCR, coming in at just $1,199 with free shipping!

And the Radrunner is very much a different kind of bike. It’s got that step-thru, moped-style frame, but this bike is all about utility. I mean, just look at how many accessories you can fit on this thing, come on!

I’ve got mine kitted out with the passenger kit that includes footpegs and the bench seat on the rear, but then I went and added the cargo box up front, which has been great to use as a small trunk. I like it better than the rack for things that I don’t want to worry about tying down in the wind.

There are a few places where Rad did make reasonable compromises to keep the price down. The display is a super simple LED display that doesn’t really give you much more info than the bare necessities of battery life and pedal assist mode. There’s also no multi-speed transmission, instead, the bike is a single-speed.

The single-speed design doesn’t bother me too much since the gear ratio is actually pretty decent, and the bike is already quite pedal-able. It doesn’t feel awkward to pedal like a lot of electric mopeds do.

All in all the RadRunner packs a few compromises but is mostly a big winner in my book, especially for its insanely affordable price.

If you want to learn more about the RadRunner, check out my full-length RadRunner review, or watch my review video below.

Next up we’re checking out the Ariel Rider D-Class, an all wheel drive electric minibike that has power for days.

Those motors are 750W nominal hubs but Ariel Rider has them pulling peak power of 1,500W. Between the two of them, that means you’ll hit 3kW of power during acceleration. For me, that’s enough to do burnouts like a piece of cake.

It’s also enough for high-speed riding. I hit a maximum of around 33 mph (53 km/h) on the Ariel Rider D-Class. At those speeds, the front suspension helps but the lack of rear suspension means that if you hit a good-sized bump, prepare for your rear end to part ways with the seat for a heart-stopping second.

Speaking of that seat, it’s one of the most comfortable electric moped seats I’ve ever had the pleasure of sinking into. It almost makes up for the lack of rear suspension. Almost.

Up front, we’ve got that beautiful giant headlight matched by a rear LED taillight on the back of the battery. That battery is a fairly high capacity one too, at 864 Wh. Theoretically, that will take you around 40 miles (64 km) on a charge at average speeds, but definitely not if you’re riding at top speed the whole time.

You can extend the range a bit by pedaling, and the D-Class is actually quite comfortable to pedal. And believe me, a good pedaling electric moped is a rarity.

Priced at $2,395, the Ariel Rider D-Class is mid-range in terms of electric moped pricing, but the bike’s high top speed, ridiculously fun power level, and large capacity battery make it worth the price, in my opinion.

If you want to learn more about the Ariel Rider D-Class, check out my full-length review, or watch my D-Class review video below.

This might be cheating, but I’m going to list two of Super73’s mopeds here. I think that’s fair, especially since Super73 is perhaps the first company to come to mind for many people when thinking about moped-style electric bikes. They didn’t invent the category, but they were one of the earliest and played a major role in building it into what it is today.

It’s also not the best bike to pedal, in fact, it is downright awkward to pedal. On this e-bike, you’ll want to just rely on the throttle and cruise around like a minibike, which is basically what it is.

Those wide tires make turns so much fun to lean into, and the decently powerful motor pulls you right through and out the other end. While the Super73-Z1 is a nice bike, if you can spring for it then I recommend upgrading from the Z series to the S series. I’ve spent some good time on the Super73-S1, which has a higher power motor and gets up to 25 mph (40 km/h).

It’s also a bit more comfortable to pedal, though it’s still best ridden with the throttle, in my opinion. The Super73-S1’s larger 768 Wh battery will take you further than the Z1 also. Super73 claims up to 50 miles (80 km) of range, but again, that’s in ideal conditions.

The S1 gives you some other nice additions such as hydraulic disc brakes, which are just such a big convenience upgrade, in my opinion. Right now the Super73-S1 is priced at $1,800 and is definitely worth the upgrade over the Z1, especially if you live in a hilly area or just want the extra range and nicer parts.

Lastly, finishing up the Top 5 electric mopeds I’ve tested for summer 2020 is the Juiced Scorpion. It’s not last because it lacks anything compared to the rest of these, but rather because I needed something impressive to round out the list.

The Juiced Scorpion just screams attitude and style. I mean, c’mon… look at this thing! This is what a modern-day electric moped should look like.

It’s got both front and rear suspension, plus a pretty decent seat. Not nearly as comfy as the Ariel Rider D-Class’s seat, but still quite nice. And with the added rear suspension, the ride is very comfortable.

What isn’t nearly as comfortable is the pedaling. It’s another bike that can be pedaled, and it’s fine for pedaling, but it’s not amazing. I used the pedal-assist a lot but I always felt more comfortable ripping on the throttle on the Juiced Scorpion. I imagine that very few people are going to get this model as a mainly pedal-assist bike. It’s more for cruising in style and using for utility-type trips. For that use, it’s perfect, especially with that big rack on the rear that is included standard.

The one area that was a bit of a bummer on the Juiced Scorpion was the power level. It’s just fine, but the 750W motor didn’t blow me away. The bike looks so awesome that I was just expecting more power. And even though the power is adequate, it just wasn’t as roaring as I had hoped.

But that’s ok because Juiced has you covered with a higher power version of the scorpion known as the HyperScorpion. It’s about $700 more than the $2,200 base level Scorpion, but it gets 30+ mph speeds (50+ km/h) compared to a top end of about 25 mph (40 km/h) h on the base Scorpion, and it comes with a bigger battery, mirrors, turn signals, etc.

Both are great options but the HyperScorpion is what you want for really powerful riding and for going farther on a charge. Even if you want to stick with the base Scorpion though, you’ll definitely be cruising around town in style.

Learn more about the Juiced Scorpion by reading my full-length review, or watch my review video below!

Stay tuned for more of my Top 5s, coming later this week!

That’s my list of the Top 5 electric mopeds for summer 2020!

If electric mopeds aren’t your thing though, don’t worry because we have many more Top 5 e-bikes coming soon. Keep checking back this week for the rest of the list!