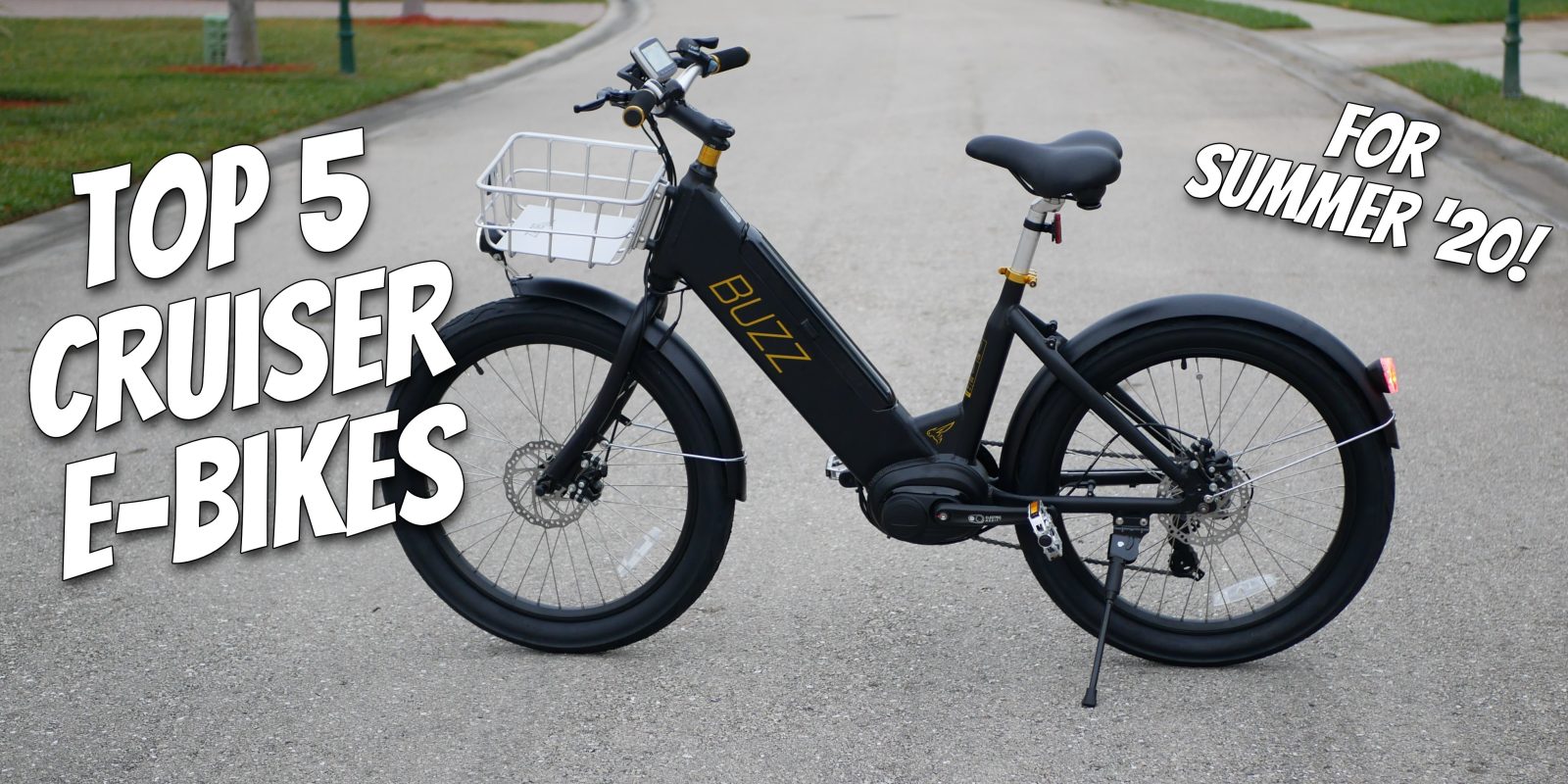 Is there anything more fun than kicking back on an electric cruiser bike, enjoying the big saddle, wide bars, and comfortable upright seating position?

If there is then I don’t want to hear about it, because today we’re all about cruisers! We’ve tested plenty of them this year, and below you’ll find our top 5 favorites that we’ve ridden and would recommend for summer 2020 e-biking fun!

This is part of a Top 5 e-bikes for summer 2020 series that we’re currently running to help introduce our readers to some great e-bikes for hitting the road or trail this summer.

We’ve already covered a few categories, but be sure to stick around over the next few days to see our choices for the following categories of electric bikes:

And be sure to check out our video below that showcases all of the electric cruiser bikes in this list in action.

First up on the list is the Townie Go! 7D, from Electra.

Sure, Electra has a number of nice cruiser e-bikes with a wide range of specs, and the Townie Go! 7D is on the lower end of their model line at just $1,499. But that’s actually an advantage to me.

Even though you could go with one of their nicer mid-drive models, if you’re happy with the hub motor bike then the Townie Go! 7D gets you rolling on Electra’s awesome cruiser frame without the additional expense of a fancy Bosch mid-drive.

The motor is plenty, the ride is nice, but from afar it looks like the battery is a bummer here at just 309 Wh. However, since this is a Class 1 pedal assist e-bike without a throttle, the range is actually still really good at around 25-50 miles (40-80 km), as long as you don’t get lazy and use the most powerful pedal assist level all the time.

As a Class 1 e-bike, the Townie Go! 7D gets up to 20 mph (32 km/h), which is plenty fast for a cruiser bike. These types of e-bikes are all about being low and slow anyways – you’re riding a cruiser for the experience, not to get to work quickly – so 20 mph is plenty.

And it’s not the speed that draws me to these bikes, but rather it’s the experience that I love so much about the Townie Go! 7D. It’s just a smooth-riding, comfortable electric cruiser bike that looks as good as it feels. It’s also one of the few e-bikes that comes in a really wide range of colors, though I hope you like pastels because that’s pretty much all you get – a wide range of pastels.

There’s also a step-over frame if you’re not into the step-through, though a big part of the market for cruiser e-bikes includes people with accessibility issues, so I’ll bet the step-through is the more popular of the two. All in all, this is a solid e-bike that is all about the experience!

If you want to learn more about this e-bike, I recommend checking out my full, in-depth Townie Go! 7D e-bike review here, or watch my review video below.

Next up we have the Buzz e-bike. This one combines cruiser e-bike geometry with the utility of a cargo bike by including a super sturdy front cargo basket built right into the frame.

The major difference with the Buzz e-bike compared to most e-bikes on this list is that you get an upgrade to a mid-drive motor, meaning you can power the bike through the gears and can shift accordingly. The biggest advantage this lends is the ability to drop into a lower gear for hill climbing or upshift for higher speed on flat ground.

The mid-drive motor is one that most people aren’t familiar with, but comes from a company called Tongsheng. They don’t have Bosch’s name recognition, but they make a great mid-drive motor that is affordable as well.

The bike costs just $1,499, which is the same as the Townie Go! 7D from above, but you get this mid-drive motor with a built-in torque sensor to give you nice, smooth pedal assist. When I compare the Tongsheng to other mid-drives like Bosch, I’d say the biggest noticeable difference is that it is a bit louder, but you only really hear it at lower speeds. When you’re cruising at top speed, the wind noise covers up most of the motor whirr.

I also like the big, clear display the bike comes with. No squinting with this bad boy!

The flame tire tread is a bit much for me. But hey, maybe that’s your style, I don’t judge.

If you want to learn more about this e-bike, I recommend checking out my full, in-depth Buzz e-bike review here, or watch my review video below.

Next we have the Model C, from Electric Bike Company.

This cruiser is kind of a boat, but despite being so big, it still rides just as smooth and comfortable as you’d expect a beach cruiser to ride.

The high quality experience with the Model C starts even before you open the box though. Electric Bike Company is one of the few manufacturers that ships its bikes fully assembled. It is superbly packaged so that nothing can be damaged and all you have to do is turn the handlebars forward and you’re ready to ride.

The box and packaging is so good that I actually re-used it a few weeks later to ship a motorcycle in, believe it or not (yay for reduce-reuse-recycle!).

It also has the nicest brakes of any e-bike on this list, with 4-piston Tektro Dorado hydraulic disc brakes both front and rear. Then you’ve got some other nice features you won’t find elsewhere, like the slick-looking front basket that is actually really useful. And the battery even comes with a built-in charger and cord so you never have to carry a charger with you. I can’t overstate how nice this is, especially if you’ve got a few e-bikes like me and are always confusing chargers or getting them tangled up.

The last important thing to note about Electric Bike Company is that they are a US company that actually builds their e-bikes in the US. I’ve visited their Newport Beach factory and met their team. It’s really impressive what they do and I love knowing that they’re contributing to the local economy and creating dozens of local jobs in their community.

That might explain the slightly higher price at $1,999, but to be honest, I would have expected even higher for an American made e-bike with such high speed and high power, not to mention those nice bike parts. To me, this is a smoking hot deal for anyone looking for a high-powered cruiser.

If you want to learn more about this e-bike, I recommend checking out my full, in-depth Electric Bike Company Model C review here, or watch my review video.

With the Schwinn EC1, I have to tell you the price right off the bat on this one, it’s just $898. That’s insane, right!?

And you still get a pretty good cruiser e-bike!

It’s not a powerhouse or anything, it’s only a 250W e-bike, which means this one is really meant for flat-land cruising, not climbing giant hills, but if you keep it where it excels, then it excels.

The hub motor is plenty strong for a fun flat-land ride even on light trails, and the fact that the bike is pedal assist-only means that it keeps you honest with a bit of your own pedaling power. That’s either going to be a positive or a negative depending on your views on pedal assist.

And the 36V battery is enough for a leisurely 30 miles (48 km) of range, though again that’s with you adding a bit of pedaling help.

All the other classic cruiser features are there too. You get that accessible step-through frame, a nice wide saddle, handlebars that are tall enough to keep you upright but actually aren’t as exaggerated as some of the wide handlebars from extreme cruisers and there are also nice big tires that help make up for the lack of suspension.

You even get metal fenders and a functional rack, all for $898!

The Schwinn EC1 is a simple e-bike, it doesn’t claim anything fancy, but it’s a solid, well-made bike that gets you rolling on an electric cruiser for dirt cheap. It won’t win any beauty pageants or design prizes, but it is a solid option for a fun electric cruiser on a budget, and that’s why it is on this list. It just works and works well.

If you want to learn more about this e-bike, I recommend checking out my full, in-depth Schwinn EC1 review here, or watch my review video.

And last but not least we have something quite different but totally worth your attention. This is the Samson from a company called Day6.

You might not have ever heard of these guys. Hell, I hadn’t heard of these guys until Mikey G found this bike and reviewed it for Electrek, but it is a hidden gem because despite its somewhat peculiar appearance, the low center of gravity it provides gives it better handling than pretty much any other electric cruiser.

The bars are so big that they’re practically ape hangers, but you can also really torque on them and then lean hard into turns.

The Samson might be marketed towards older riders looking for an accessible e-bike but it is likely to bring out the kid in everyone with its racecar-like handling.

The bike may look a bit goofy in general, but hey, who cares how you look if you can have this much fun? Just be prepared to pay handsomely for something like this. The Samson is a special bike, but that means it also has a special price, to the tune of $3,600. Ka-ching!

If you want to learn more about this e-bike, I recommend checking the full, in-depth Day6 Samson review here, or watch the review video below.

And that’s it for now, but we’ll have another Top 5 list coming soon. Be sure to check back tomorrow for our next top 5 e-bikes list!