This Italian 4 kW electric bicycle (or is it a dirt bike?) is heading to US

They may call it an electric bicycle, but the Italian-made SEM Moto-Bike is more like a mythical hybrid. It features the body of a bicycle and the heart of an electric dirt bike.

And soon it will be headed to the US.

From 2 kW mini-bikes all the way up to 5 kW street machines with pedals, we’ve just about seen it all.

But the Moto-Bike from Italian company SEM still managed to show us something new and interesting.

On its surface, the Moto-Bike still looks very much like a standard electric mountain bike.

It features a fairly common style of electric bicycle battery, though its 52 V and 910 Wh capacity are a bit higher than most e-bikes. It is built on what appears to be a fairly standard construction aluminum downhill bicycle frame. And it includes a pair of pedals on clamping-style cranks feeding an 11-speed mountain bike drivetrain. So far, so good in terms of a high-performance electric mountain bike. But tucked under the rear suspension is an electric motor unlike one we see on most electric mountain bikes.

The motor doesn’t power the existing bicycle gears like you’d expect to see on a standard electric mountain bike, but instead uses a second left-side-drive setup with a belt or chain (they have both options) feeding a dedicated sprocket on the left side of the rear wheel. And it was probably a wise design choice, considering that mid-drive motor is putting out 4 kW (5.4 hp) of power. That’s enough to shred most standard bicycle components like chains and gears. Heck, even 1.5 kW (2 hp) e-bike motors have been known to send bicycle chains to an early demise. 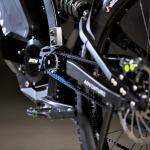 The range might not be very good by electric dirt bike standards, quoted at just 30 miles (48 km). But it at least features a regenerative braking system, which might help a bit.

The entirely Italian-made SEM Moto-Bike is now looking for a US-based distributor, according to New Atlas. The company hasn’t revealed any pricing info yet, but the “Italian-made” part should give you an indication that this won’t be a cheap e-bike. 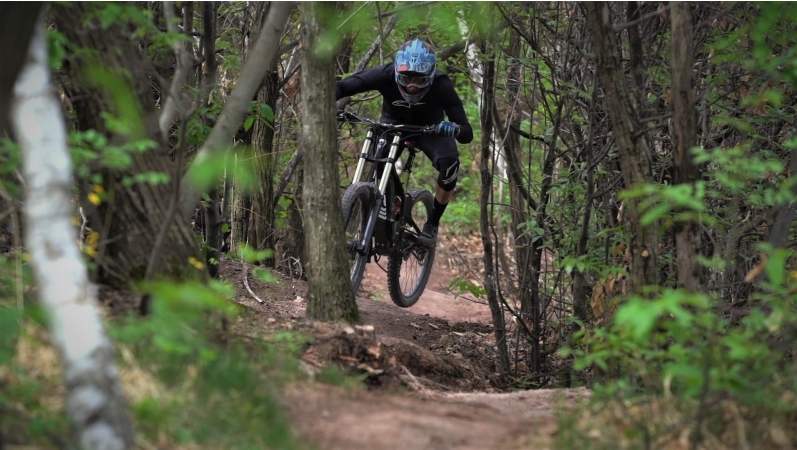 While its 4 kW power level will most likely see it run afoul of typical electric bicycle laws in most US states, the pedals appear to be almost vestigial anyways.

The Moto-Bike is more along the lines of a Sur Ron Light Bee, an UBCO FRX1 (or at least before the UBCO FRX1 lost its pedals) and other small electric trail bikes that bridge the gap between electric mountain bikes and electric dirt bikes.

Such bikes often have bicycle pedals as a backup power source. The secondary-drive method can be helpful if the battery runs dry (at which point I imagine the lower bicycle gears will be the only ones getting any use), but they can also add a bit of a workout if a rider wants to get a pedal-assist mountain bike experience.

And hey, it certainly can’t be any crazier than a bona fide electric motorcycle with pedals!