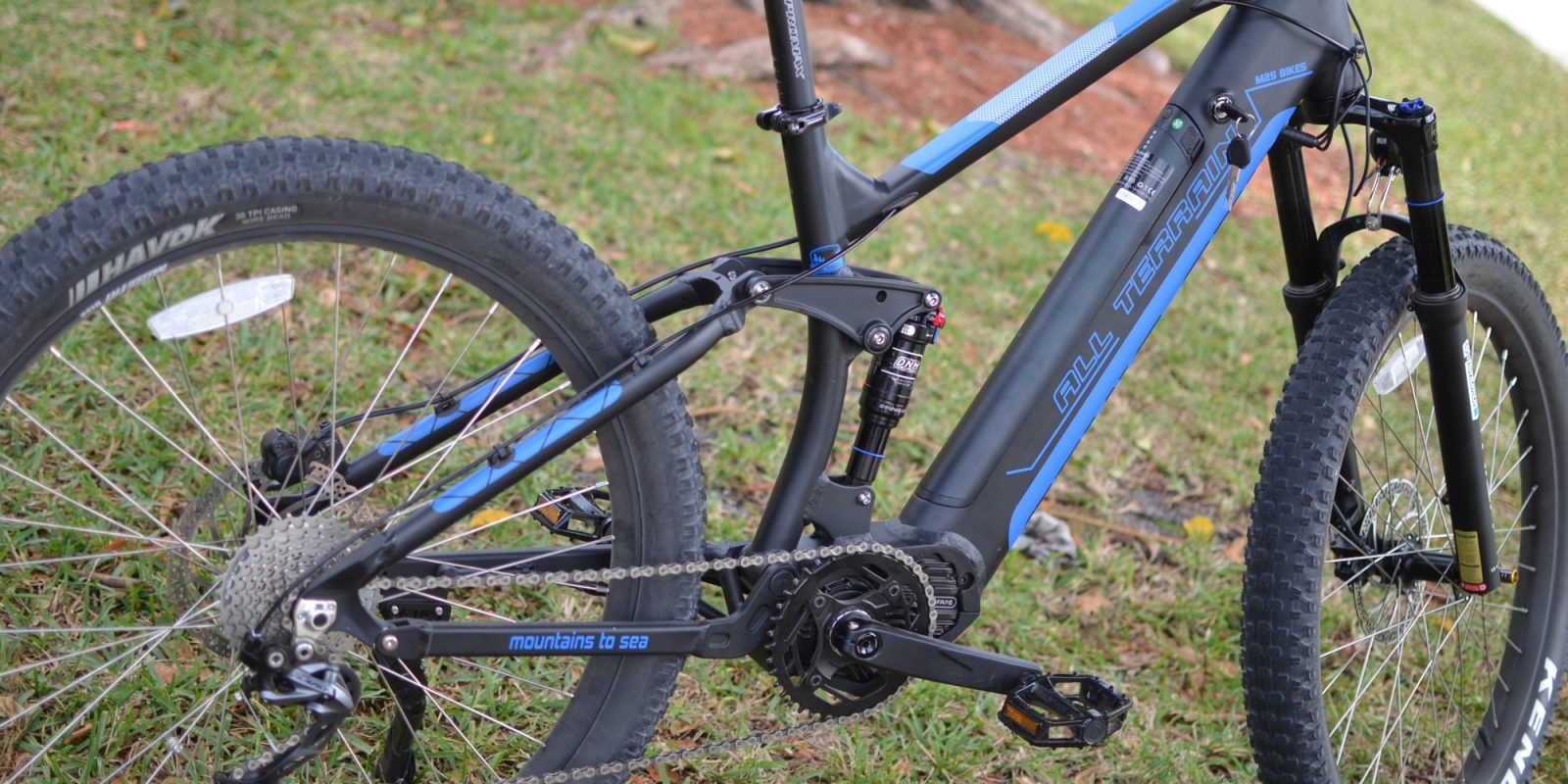 Electric bicycles come in all shapes and sizes. But one of the most fun styles for me has always been full suspension electric mountain bikes. And the M2S All Terrain M600 FS electric bike is a great example of the type of powerful, rugged full suspension bike that is nearly as much fun on-road as it is on the trails.

M2S Bikes, which stands for Mountains to Sea, has a wide range of of bikes designed to conquer just about any riding surface.

I’ve had the pleasure of putting the M2S All Terrain M600 FS through its paces and boy am I glad I did.

But before I get too far into the experience, let’s start off with some tech specs. Oh, and don’t forget to check out my short video review below to see this wild e-bike in action! 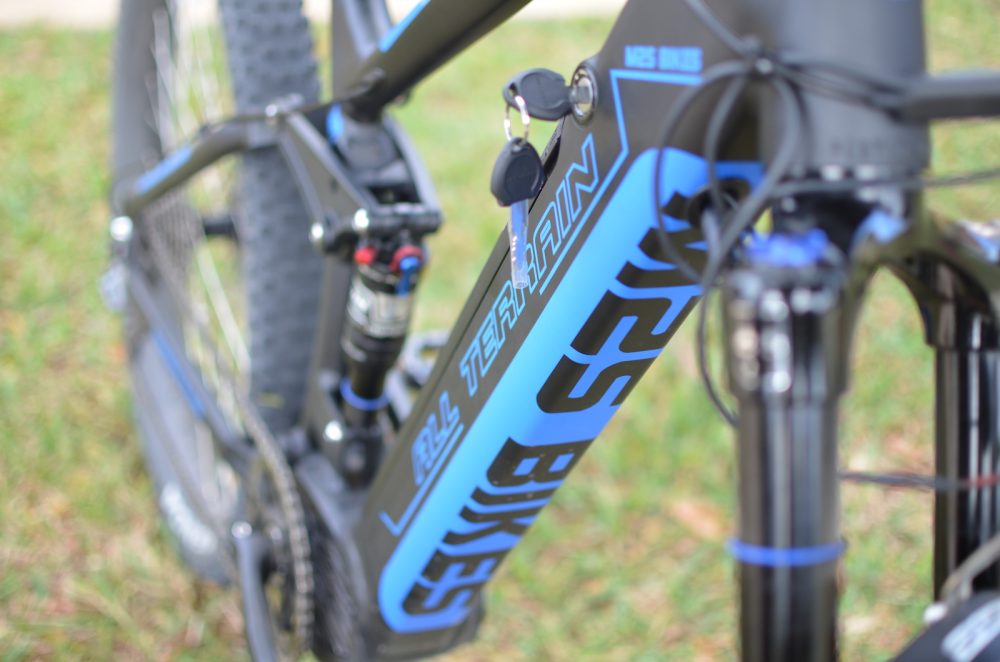 What is it for?

First of all, the M2S All Terrain M600 FS is obviously optimized for off-road riding. The full suspension and wide tires help the bike handle everything from forrest trails to table tops with ease. I tried both and just about everything in between.

But it’s not just an off-road machine. I also tested it out for standard bicycle lane commuting such as grocery runs. And I have to say, it works well for both. It’s obviously a bit overkill for just a commuter bike, but the high end suspension and hydraulic disc brakes are the kind of parts that turn a rough commute into a pleasure ride. And with two frame sizes available, it’s more likely to comfortably fit a wide range of riders, unlike many one-size-fits-all e-bikes. Plus it’s got an integrated front head light to help cars see you on the road. It won’t do too much for off-road riding at night, but no bicycle light can handle that job alone. You need those crazy 1,500 lumen blindingly bright lights to actually light up pitch black trails at night.

There’s also a tail light under the seat, though it doesn’t run off the main bike battery, which is a bit of a bummer. But considering this is a trail-optimized bike, not a commuter bike, it makes sense. The lights are mostly there for short road jaunts on your way to the trail or back. 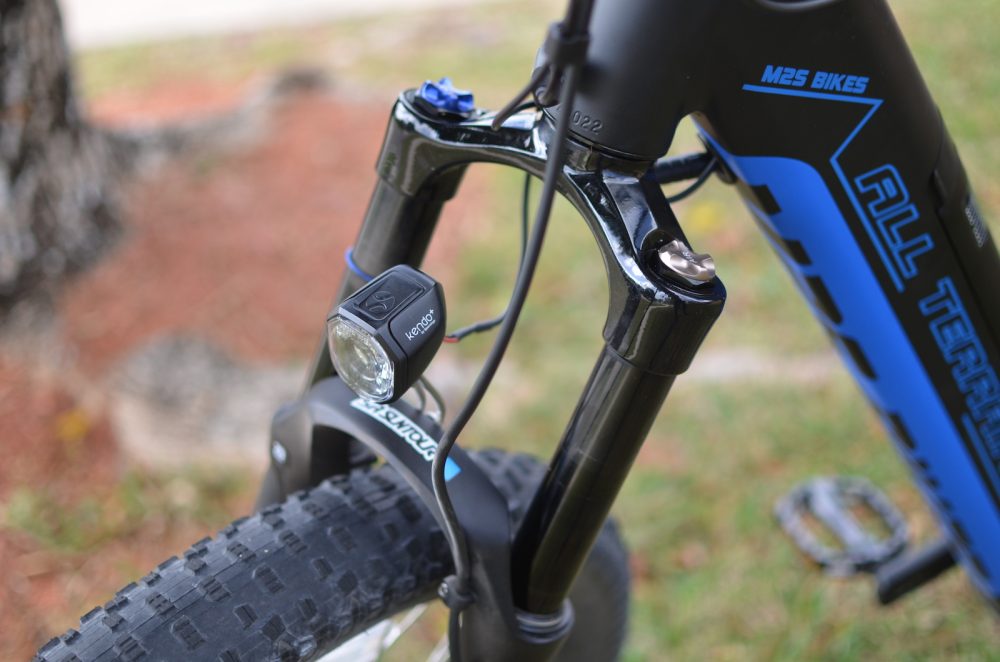 The bike I tested didn’t come with a throttle, which meant it was pedal assist only for me. And while I normally rely on a throttle to offset my poor cycling, the pedal assist-only operation gave me a rare chance to verify some real world pedaling range.

During one afternoon pleasure cruise where I wanted to test mixed range, I rode 3 miles on pavement to a local trail followed by another 6 miles of trail riding and then rode 3 miles back home. After 12 miles (19 km) of riding I was amazed to see I was still at 73% battery, giving me a likely range of almost 45 miles (72 km). I kept the bike in pedal assist Level 2 on the road but was usually between pedal assist Level 3-5 on the trail (with 5 being the highest).

So suffice it to say, this is a great bike for road use as well as trail use. That 700 Wh battery can keep you going longer than you’d expect.

A big advantage of the M2S All Terrain M600 FS is that it doesn’t look like an e-bike, and so I didn’t get the dirty looks that I often get on trails. Between the battery concealed in the downtube and the mid-drive motor tucked down between the pedals, there isn’t a lot to give away the electric nature of the bike after just a quick glance. It’s only after you start to stare at it and notice that the downtube is a bit chunky that the clues start to add up. The M600 motor is powerful, but it’s not that big physically, which helps with the illusion that this is a pedal bike.

Of course when I’m flying up hills without breaking a sweat… that power might give it away.

And speaking of that power, the Bafang M600 mid-drive motor powering this thing is incredible. It’s not quite at the level of the legendary Bafang Ultra motor, but it’s just one step down in the Bafang hierarchy. It’s listed as a 600 W motor, which is almost comical since it can put out a peak of 1,200 W. But it’s the torque that really gets you going. With 120 Nm of torque, this is the motor you want when starting on a tricky off-road slope or during a long and grueling hill climb. There’s also a torque sensor built into the motor, which helps it power you almost immediately after applying pressure to the pedals – there’s nearly zero lag. 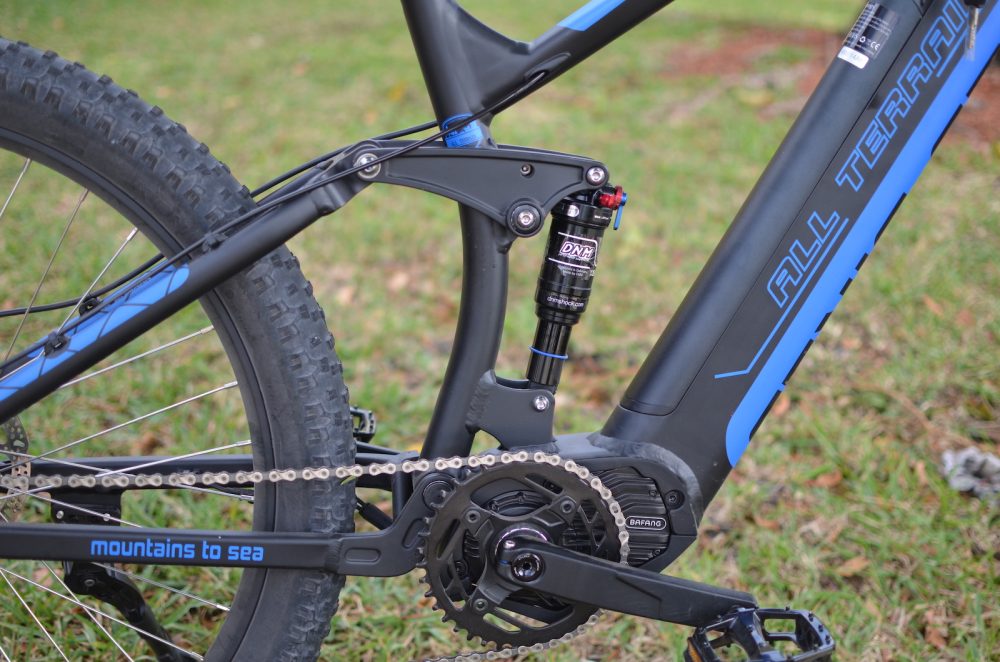 The rest of the bike is nicely outfitted as well. The wheels use true thru-axles, which creates a stronger structure for more hardcore riding. But they’re also quick release thru-axles so you don’t have to start breaking out your tools to pop the wheels off and get the bike back in your trunk or back seat.

The Suntour fork and DNM shock aren’t top shelf, but they aren’t cheap parts either. You’re definitely going to notice the air suspension beneath you and it makes a big difference.

And those Tektro Auriga hydraulic disc brakes clamping on 180 mm rotors will stop you nice and quickly too. Other parts like the two-piece slotted compression crank also show a higher level of componentry on this bike, a level that you almost never see on sub $3k e-bikes.

I did run into one problem that occurred a couple of times. The Bafang display has quick release connectors for the wires that enter it from the rear. Electric mountain bikes sometimes use these types of connectors instead of hardwiring in the throttle/controller/etc because it can prevent damage in a crash. And every mountain biker eventually crashes. If the wires were hardwired, they could be ripped out. But quick releases allow them to pop out without damage to the wire or display. The only problem is that sometimes my screen would shut off during big jumps or on super rough terrain. I played with those connectors and eventually it stopped, but it was a bit annoying until I figured it out.

So I’d recommend just double checking that your display’s connectors are in all the way and there isn’t any play there – at least if you’ll be jumping or pushing the bike hard off-road. 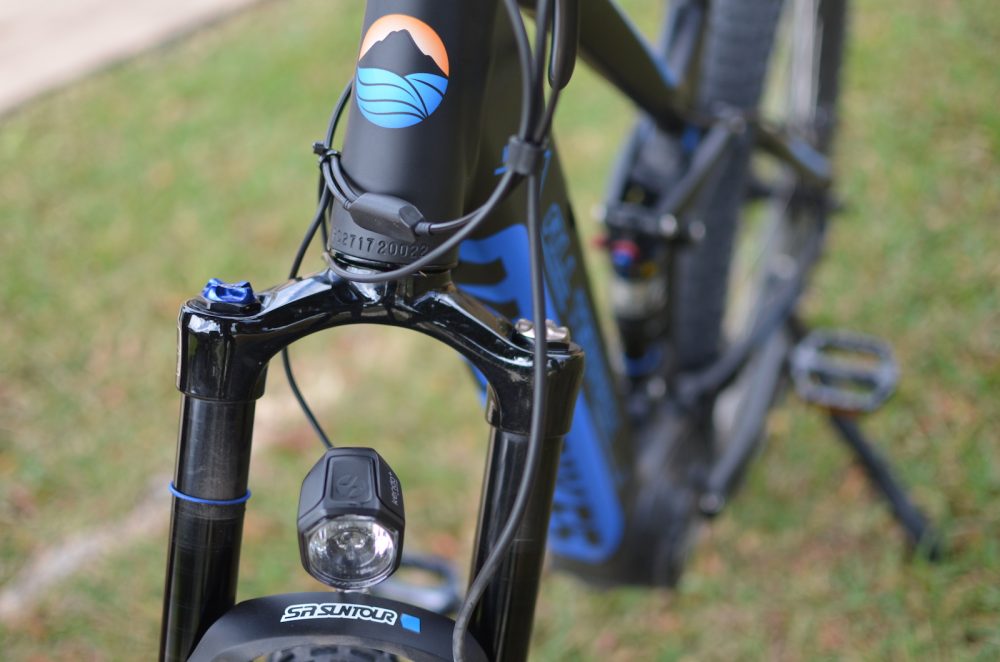 In summary, the M2S All Terrain M600 FS has been a blast of an e-bike. It ain’t cheap, priced at $2,999. But electric mountain biking is a niche within a niche. And high quality toys for this niche aren’t cheap. But if you want a rugged, safe and reliable e-bike that can hit trails and jumps all day, yet is light and efficient enough to ride the roads back home as well, you’ve got to play to pay. And to be honest, $2,999 is nothing compared to some of the expensive European electric mountain bikes that cost twice as much or more.