Electrek is on-site in Midtown Manhattan where just minutes ago, Zero’s new SR/F was unveiled. The SR/F electric motorcycle is now Zero’s fastest offering with a top speed of 124 mph (200 km/h).

The SR/F also has a host of new parts and features never before seen on a Zero such as 0-95% charging in just 1 hour. Check out this up close look and get all the details below.

After teasing the new model for weeks and dropping hints along the way, the bike was finally unveiled today by CEO Sam Paschel. The new Zero SR/F owes its high performance to a new motor, the ZForce 75-10. This replaces the ZForce 75-7 as the largest motor in Zero’s lineup.

The ZForce 75-10 motor helps the SR/F pump out an impressive 80 kW and 190 Nm (140 lb-ft) of torque. That motor is now coaxially mounted, meaning it shares the same axle as the rear swingarm. That helps reduce complexity and maintain proper belt tension.

For reference, Zero’s longest range bikes right now are the SR ZF14.4 models which offer a range of 179 miles (288 km) in the city or 90 miles (145 km) on the highway. The addition of a PowerTank can add an additional 3.6 kWh to those bikes.

Zero claims that the SR/F is the first available fully IOT-connected motorcycle. In addition to the rider being able to view and alter performance parameters of the bike remotely, Zero can also send over-the-air updates to the bike.

The Zero SR/F features a number of different Level 1 and 2 charging options. The lowest option includes a 3 kW charger that can provide a 0-95% charge in 8 hours from a 110V outlet. That time is cut in half when using a Level 2 220V source.

A second 3 kW charger can be added that cuts charging time to 2 hours on Level 2. Then one step further, a Charge Tank can be added to cut charge time to just 1 hour on a standard Level 2 charger. That’s equal to a charging rate of 150 miles per hour.

To hear more about how charging works, check out CTO Abe Askenazi giving us a demo below:

Both models feature the same Bosch Motorcycle Stability Control which includes advanced control features from anti-lock brakes to cornering assistance. There are also a number of user-configurable settings including dynamic traction control and user-adjustable power and torque settings.

Deliveries of the SR/F will begin in April and the bike has already entered full production.

More photos from the launch will be posted shortly, so keep checking back here!

The electric motorcycle industry is rapidly heating up

While the Zero SR/F is undoubtedly impressive and marks new territory for the company, it isn’t alone in the industry.

Fellow Californian electric motorcycle company Lightning has their own electric sport bike set to launch next month. The new Lightning Strike has been hyped as the first real competition for Zero. With a starting price of just $12,998 and a speed/range rating of 150 mph/150 miles, the Lightning Strike could very well give the SR/F a run for its money. 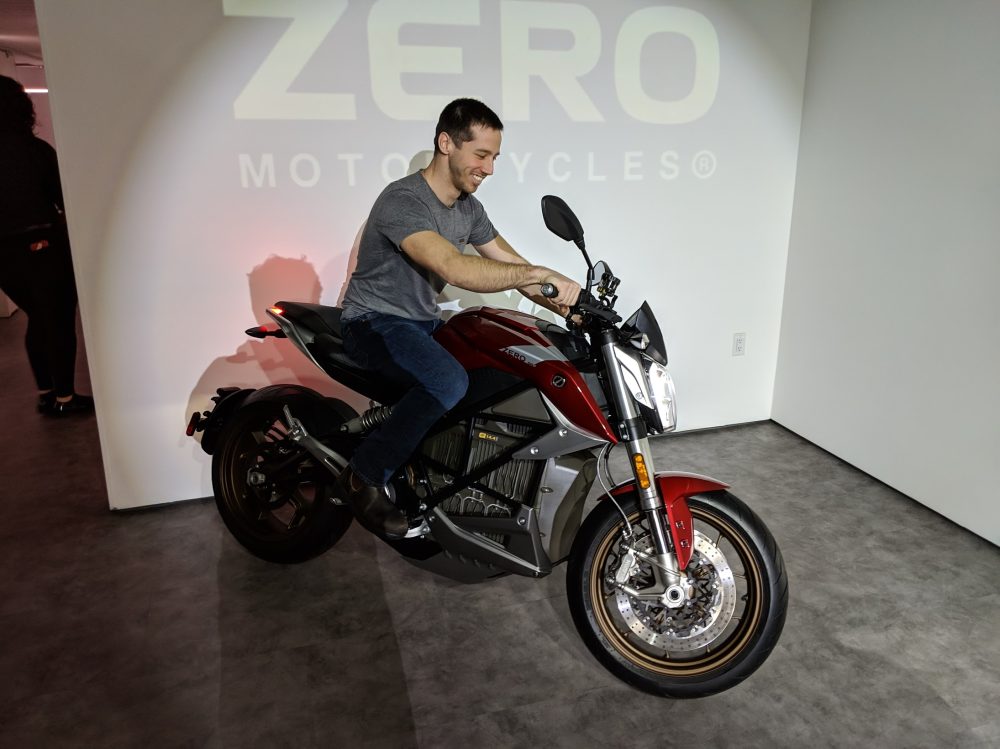 And one other American motorcycle manufacturer is also set to release a much anticipated electric motorcycle later this year: the Harley-Davidson LiveWire. That bike features some impressive technology, though its $29,799 price tag and speed/range rating of 110 mph/110 miles (city) mean that it’s likely limited to premium customers looking more for comfort and class than high performance. And when comparing the specs, the SR/F offers a higher speed and twice the range for $10,000 less than the LiveWire, further alienating Harley’s premium offering.

What do you think of the new Zero SR/F? Will it reign supreme, or will it face steep competition? Let us know in the comments below.