In what will surely divide the e-cycling world, Delfast has updated its latest high-speed electric bicycle. The Top 2.0 is a high power, 50 mph (80 km/h) e-bike that pushes the limits of electric bicycles.

The Top 2.0 from Delfast is the most recent update to the company’s high-speed electric bike.

The original Top electric bicycle from Delfast featured a 3 kW motor. Now the upgraded Top 2.0 will sport a higher power 5 kW rear hub motor. That increased power should help the e-bike hit its top speed of 50 mph (80 km/h) more quickly. Delfast claims that the new acceleration will be “able to compete with most regular cars on a quarter-mile distance.”

The company also claims that the new motor has better thermal management, helping it sustain higher speeds with better efficiency. They also added dust and water resistance to the motor as well, achieving an IP54 rating. 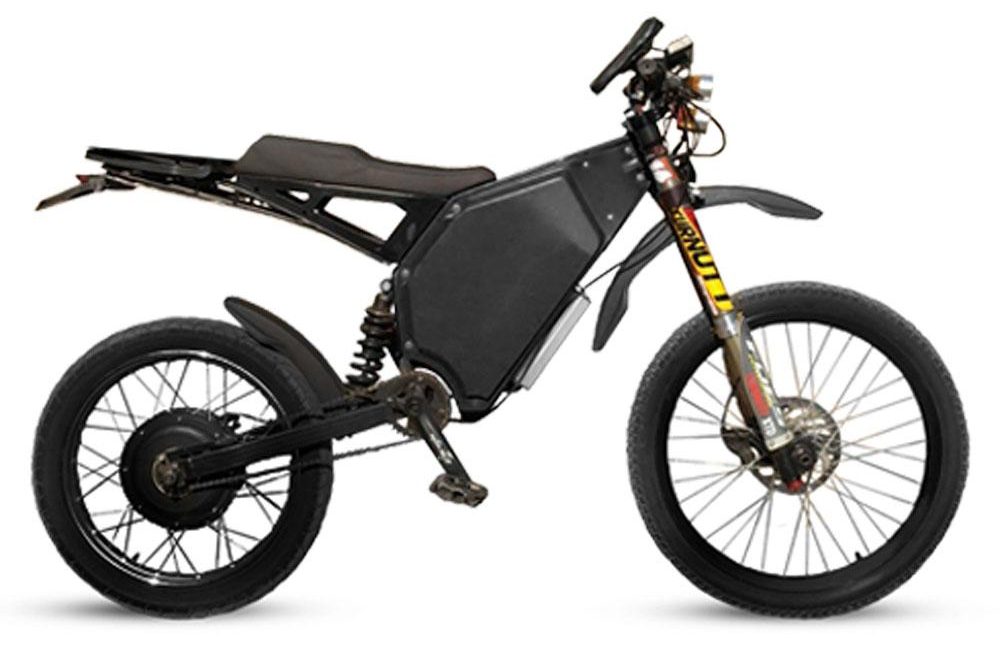 Energy for that powerful motor is supplied from a massive 72V 48Ah battery. That’s nearly 3.5 kWh of energy.

The video above, taken during a no-load bench test in the factory, shows the bike spinning up to a rear wheel speed of 68 mph (110 km/h). No-load speed is always higher than actual road speed but is an indication of how powerful the new Top 2.0 appears to be.

And when the power level of an e-bike reaches these levels, braking is even more important than ever. The Top 2.0 has redesigned hydraulic brakes and will feature dual disc brakes on the front fork. According to Delfast:

“This new power capacity required us to redesign the braking system of the bike. To ensure safety we administered a series of tests and installed reliable double disc brakes on the front fork. Such a system is installed on cross-country motorcycles and has proven itself in the most difficult conditions.”

A few spy shots of the Top 2.0 from the factory

The upgrades don’t just stop with the motor or brakes either. Delfast has been hard at work upgrading the controller, adding a better display, including a more robust GPS tracker and changing the aesthetic package. All of these changes are intended to provide a better riding experience for the user.

“We’ve also improved and perfected the internal design of the controller, modifying its firmware. Now it provides smoother and safer engine operation over a wide range of speeds. And it is coupled with a waterproof colour display. The bike has several more details that we’ve added, like the controller protective cover, new 3G GPS tracker and more aggressive-looking wings. All in all, we believe that this will create a greater experience for riders who want more control, more power and more dynamic cycling that an e-bike can offer.”

The Top 2.0 has some admittedly impressive features, but don’t expect this one to fall into the budget e-bike category. The current Delfast Top is priced at around $3,900.

The upgraded model won’t begin making deliveries until Q4 of this year. In the meantime, anyone who purchases the original Top model will have the option to wait for the upgraded Top 2.0.

I applaud the engineering and I’m impressed with the e-bike.

I also think the price is quite fair. I mean, there are other ways to go almost this fast. My 46 mph (74 km/h) urban electric motorcycle costs just $2,495. But it also doesn’t have the suspension to match something like this off-road.

And there’s the rub. The Top 2.0 is really meant as an off-road electric bicycle. This thing isn’t likely to fit many e-bike laws for on-road use. Off-road though is another story, and that’s where this thing would shine. Consider it to be something like the Sur Ron electric off-road bike, but with pedals.

Do the pedals make it a bicycle? Yes, technically speaking.

But is it really a bicycle?

Theoretically, you could pedal this thing, which might actually come in handy if you run out of battery while still tearing up forest trails. But the Top 2.0 definitely falls into the almost-a-motorcycle category of electric bikes.

What do you think of the Delfast Top 2.0 e-bike? Let us know in the comments below!