A Ford engineer hosted an “ask me anything” (AMA) thread on Reddit over the weekend.  In it, they let us in on a few new bits of information about the car (including battery and charging specs), and talked about his opinion of it, particularly in comparison to the Tesla Model Y, which will target a similar market as the Mach-E.

The thread has since been deleted, but many of the questions and answers were archived by the folks over at Mach E forum.

There are no particularly Earth-shattering revelations, but it’s interesting to hear about the car in a fairly unfiltered manner from someone on the inside.  Though some of his independently-verifiable statements were inaccurate, so take all of this with a grain of salt.

Regarding charging and battery specs, the engineer stated that Ford is being “conservative” in their statements about what the car will be capable of.

When Mach-E specs first leaked, we learned there would be 230- and 300-mile battery options – similar to the Tesla Model Y.  It turns out those options translate to 75 and 98kWh battery packs, which are significantly larger yet provide less range than the Model Y (~75kWh, 315 miles).

Some companies hold back a large portion of their battery pack to protect against degradation, so this is likely part of the reason that Ford’s big battery doesn’t offer as much range as Tesla’s smaller one.  While the engineer didn’t explicitly confirm this, they did say Ford wanted to be conservative in order to avoid problems down the line (like Tesla’s legal issues related to capacity).

In response to a question about the Mach-E’s 150kW charge rate and whether the car would ever be able to charge any faster than that, the engineer pointed out that it would be silly to build a car with wires capable of accepting 350kW and not use them.

The Mach-E does have slightly disappointing charging specs.  Ford states that it will be capable of 150kW charging, which is more than most cars on the road these days.  But Ford also says that the car will be able to add 47 miles of charge in 10 minutes.  This works out to a peak charge rate of about 90-100kW based on the car’s battery size and range, not 150kW.  This must be another thing Ford is being conservative on.  In comparison, Teslas are currently capable of 250kW charging – and the engineer was highly complimentary of Tesla’s battery and charging capabilities.

Related to these battery and charging specs, the engineer said that the Mach-E has been built with the same operating temperatures in mind as the rest of Ford’s vehicles.  Ford considers -50C to 60C (-58F to 140F) as their vehicles’ operating spec, and the Mach-E is being built with those temperatures in mind.  So the Ford ought to be able to operate even in the coldest winters or the hottest summers.

The engineer was less complimentary of Tesla’s manufacturing capabilities.  While they had great things to say about Tesla’s battery and motor engineering (which “outpaces the industry by 5yrs easy”), they were very negative about Tesla’s build quality.  In contrast, they said that they think the Mach-E’s interior quality is “probably the nicest interior we offer outside of Lincoln, it’s jaw dropping.”

The engineer also stated that Ford’s warranty is superior, “with all powertrain components covered by 8yrs, instead of just the battery in Tesla” (this is not true, Tesla’s powertrain warranty covers both the battery and drive unit and has for several years).

In response to questions about the decision to call the Mach-E a “Mustang” and whether Ford is serious about this car, the engineer pointed out that Ford employees seem increasingly onboard with the Mach-E project.  Even the skeptical among them have had their minds changed as they’ve learned more about the Mach-E.  They specifically called out Dave Pericak, former chief engineer for the Mustang line, as being “really hard to convince, but he’s a Mach-E supporter now.”

Part of the reason the traditionalists came around is because the Mach-E is seen as the vehicle that could save the entire Mustang line.  With stricter standards for fuel economy and emissions, and with the public coming around to the knowledge that electric is better for performance anyway, the big V8s of traditional muscle cars can’t really stick around forever.  The engineer repeatedly pointed out that the Chevy Camaro is being discontinued (this may or may not be true), and that Ford wanted to avoid the same fate for the Mustang.

GM has explicitly stated this as their motivation for building EVs, saying that they need electric cars in order to sell more SUVs.  It seems that Ford, despite all indications that the Mach-E project is being taken very seriously within the company, has the same mentality as GM in this respect.  Not quite the best way to reduce emissions if all you’re going to do is offset your reductions by selling more gas guzzlers.

So, Ford employees seem to like the Mach-E.  Why?

The engineer teased a few features which do seem novel.  The Mach-E has a face camera in the steering wheel cluster which will be used for future autonomous driving purposes.  It will be able to detect whether or not the driver is in the seat and paying attention to the road.  The engineer suggests that this will be better than Tesla’s “autopilot nag” warnings which require steering wheel movement every once in a while, allowing a “more natural experience and you can rest your arms.​”

The reason for this is because of the physical control knob that Ford has added to the bottom of the screen, allowing easier operation without taking the driver’s eyes off the road. 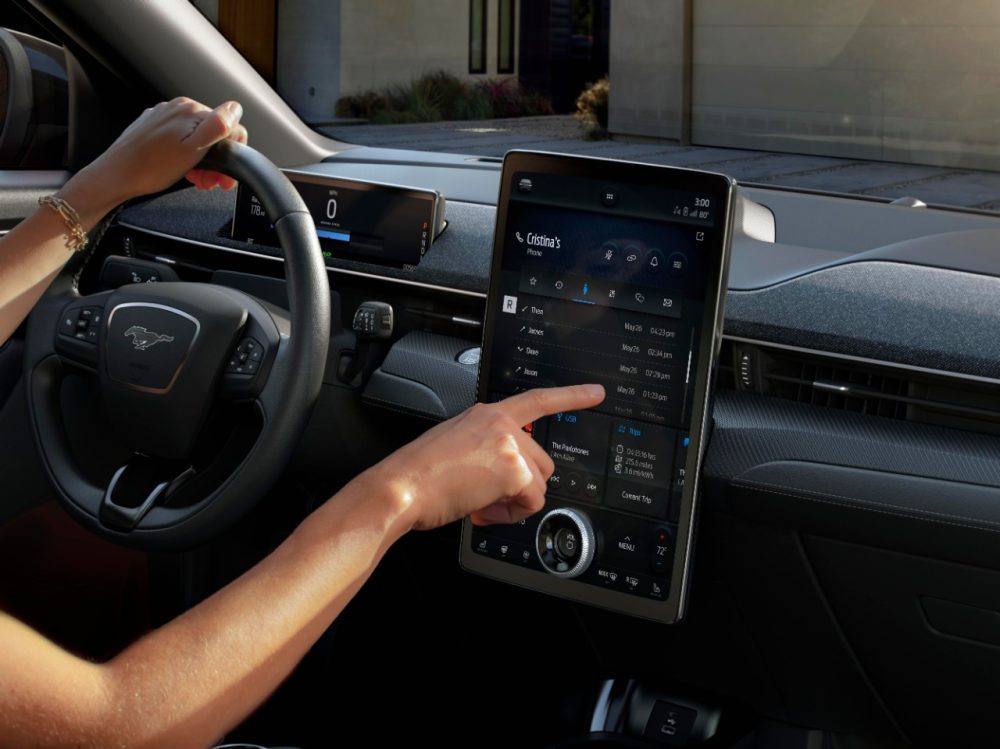 Also, the Mach-E’s cluster will be capable of side-by-side displays of both Ford’s “sync” infotainment system and Apple CarPlay or Android Auto.  Tesla does not use either CarPlay or Android Auto, and many owners have asked Tesla to add it.  So for those who want access to it, or prefer having a choice between using the native car system or their phone’s system, Ford will provide more flexibility there.

The engineer said the car’s computer has been overengineered with more than enough processor power and memory for very fluid operation and plenty of futureproofing.  This should help as Ford plans to put out over-the-air updates, in similar manner to Tesla, to improve the car after release.  The engineer couldn’t confirm whether those over-the-air updates would be free, but said “it will be an analogous situation to the Tesla ownership experience,” which suggests they will be.  They teased interesting updates, saying “The OTA is really going to bring some special things. Stay tuned!​”

Finally, the engineer repeated a couple other points several times.  First, they stated that what they like about the Mach-E is that it has so much more “soul” than any other electric car out yet.  One can imagine that many electric car owners, who almost without exception love their electric cars and would buy one again, would disagree with the idea that EVs have no soul.

Second, the engineer said many times that the Mach-E shapes up well against the Model Y for one big reason: incentives.  They stated that “our vehicle is more targeted at meeting federal and state rebates.”  We are not sure what they meant by this, because there’s nothing specific in the design process required to meet those incentives (other than minimum battery capacities which are easy to meet).

But the Mach-E will qualify for incentives which the Model Y won’t qualify for.  Because of the silly way that the US federal EV incentive is structured, companies that got a head-start on electrification and led the industry even when it was hard to do so are now disadvantaged against late movers.  Every company gets 200,000 vehicles worth of credits before a gradual expiration of those credits begins, and Tesla has already worked through those credits (so has GM, but Ford has not).

So now that Ford shows up onto the scene about a decade late, they get a leg up on the company that paved the way for them.  This means that, in comparison to the Tesla Model Y, the Mach-E has a big price advantage.

It should be noted that if Ford really is “targeted” at meeting incentives, this betrays a “compliance” mindset within the company.  Ford told us that the Mach-E began as a compliance car and then changed into a more serious performance project, and the engineer echoed those comments in their AMA.

But we’ve seen other hints of this “compliance mindset” still existing in the Mach-E project.  For example, Ford has already stated that they’ll send the majority of first-year production to Europe – for compliance with EU regs.

I’d like to reiterate that there were a number of inaccuracies in the engineer’s comments, and none of this is official from Ford, so it may or may not be true and of course, lots of things are subject to change before the car comes out at the end of this year.  Do feel free to go and read the engineer’s full comments if you want to read some more rumors about this car.  And let us know in the comments if you find anything else juicy.