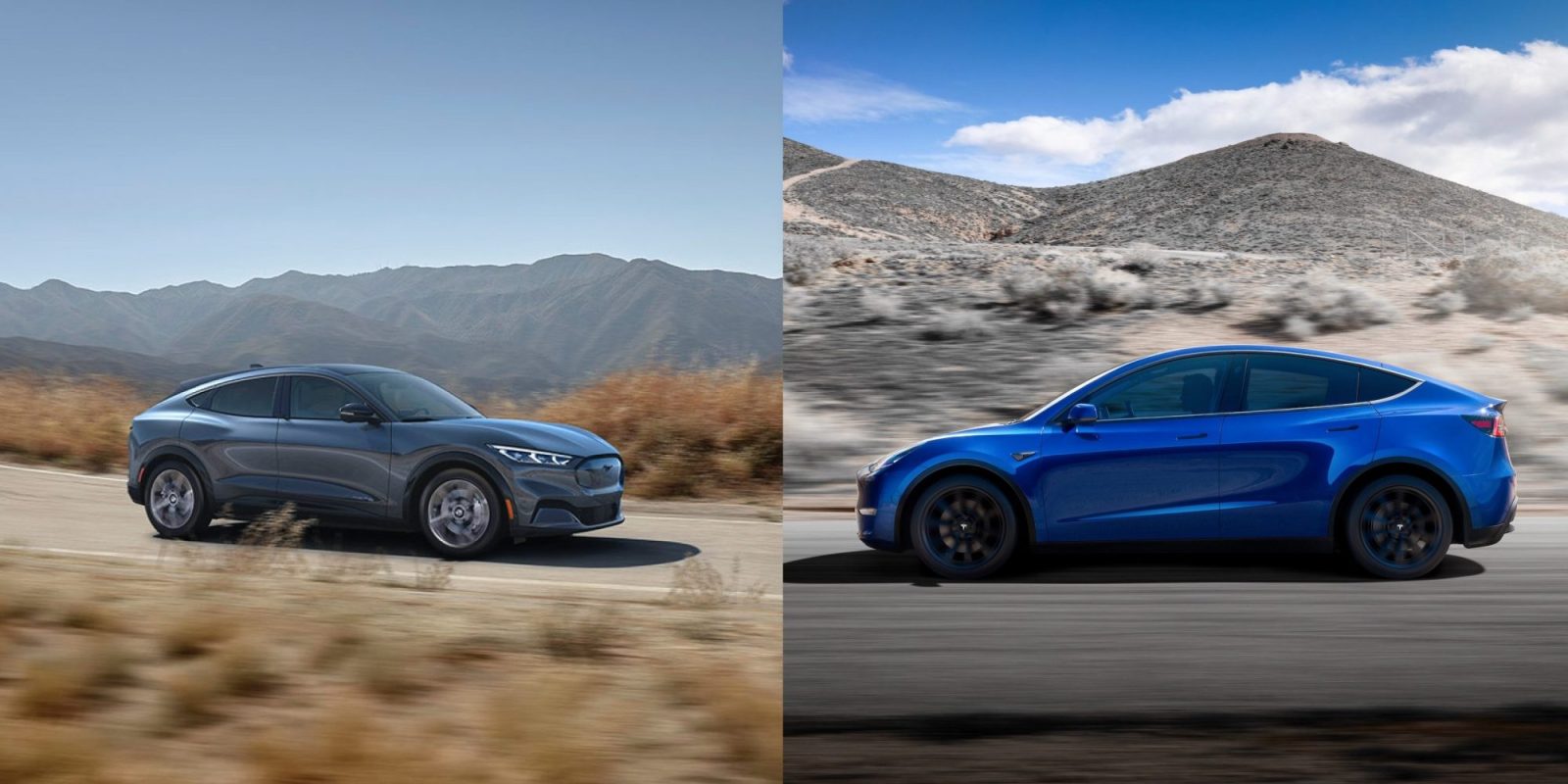 Consumers are split nearly right down the middle about Ford and Tesla’s upcoming offerings, with an Autolist survey finding a 51/49 split in consumer interest between the two cars.  Ford came out ahead by two percentage points hot on the heels of its Sunday reveal event, but we can basically call this one a tie.

Electrek compared the specs of the two cars last week, just after Mustang Mach E specs were leaked on Ford’s website.  We found that the two cars were quite competitive.

This in itself is an impressive effort from Ford, since previously their most serious EV program was the Ford Focus Electric which didn’t present a particularly compelling package.  It was fine for what it was, and for the time it came out, but it wasn’t going to thrill anyone or smash the competition.

The Mach E looks like it could, with a very attractive set of features.

Given that Ford previously was not thought of as a leader in electric vehicles, it’s a testament to Ford’s dedication to their EV program that they managed to reveal a car that competes with one from a company that has dominated the EV space after they basically created it more than a decade ago.  Team Edison, Ford’s internal electrification team, seems to have worked out well.

Autolist also asked respondents why they were picking one car over the other, and found that respondents value the two cars for wholly different reasons.

Those who chose the Mach E said they picked it because of Ford’s dealer network and the Mach E’s styling, along with concerns about Tesla’s future.

Those who chose the Model Y chose it because of the car’s expected performance and Tesla’s supercharger network, along with a general dislike of the Ford brand.

Both groups also cited their trust/preference for their respective brands and expected reliability of the cars in question.

Also, a large chunk of respondents said they disliked Ford using the “Mustang” name to sell the Mach E.  46% disliked the name while only 20% liked it.

I think the choice to use the Mustang name was a good one, but hey, to each their own.  There’s no such thing as bad publicity, as they say.

Whether or not people like Tesla (and, as an EV website, most of our readers do), it’s pretty much unquestionable that they’ve set the bar for electric cars.

This is why other automakers benchmark their cars against Tesla, and why so many cars are referred to as “Tesla killers.”  Even though Tesla didn’t have a booth at the LA Auto Show (they will be offering test drives during public days), they were on everyone’s lips this week, with manufacturers mentioning them unprompted in press conferences and interviews.  The company looms large over the industry.

And here, there’s a natural tendency to compare two electric crossovers with similar prices and performance numbers and launching a few months apart against each other.  Particularly since Ford took obvious inspiration from Tesla, even down to the reveal location.  The Ford reveal was in the same hangar where Tesla held its Semi/Roadster unveiling, next to the SpaceX campus and Tesla design studio.

So of course, asking consumers which they would prefer between the two is of great interest.  Both are desirable cars that seem to have nailed the mix of specs, price, style, technology, and so on.

But we’d like to hear more comparisons with the true competition here: gas cars.

Gas cars are still the overwhelming majority of the market, so electric cars need not compete against each other over the scraps, they need to be punching at the rest of the market.

What we’d like to hear is comparisons between the Mach E and similar gas car competitors, and how much consumers are thinking of switching to electric from gas.  We had conversations about this with Audi and Porsche (among others) at the LA Auto show, both of whom were pleasantly surprised by how much interest for their e-tron SUV and Taycan came from gas car owners, rather than current electric cars owners.

This is how we measure how much good EVs are doing – not by how popular they are with the already-loyal, but by how likely they are to get gas guzzlers off the road so maybe we can all stop choking to death on the fossil fuel pollution which kills nearly 9 million people worldwide per year.

We at Electrek take a “same team” mentality when it comes to electric cars.  It’s good to compare the various cars out there, but we need to always remember that eliminating fossil fuels is the target here, not trashing other EV brands (except, of course, if they’re obviously not taking things seriously).

So good on Ford and Tesla for both announcing desirable cars that consumers are interested in.  Now let’s get some rubber on the road, so we can get some exhaust off the road.