The highly-anticipated Rivian R1T electric truck has been spotted undergoing winter testing in Tierra del Fuego, Argentina, according to a post a rivianforums.com.

The truck is still a preproduction model, but has some changes from the concept we saw last year at its LA Auto Show unveiling.  Among these are a new color, new charge port placement, interior changes and a slightly redesigned rear end.

*Update: Rivian has clarified that these vehicles have a lot of “non-production representative content.”  In particular, the production interior is going to look much more like the concept car than the test vehicles seen in this post.

We’ve been seeing a gradual, steady stream of news about the upcoming Rivian truck, and it continues to impress with each look. Recently Rivian has shown us some great photos and video of the capabilities is plans to offer with its R1T, including a tent over the truck bed and a full stove/kitchen setup which fits into the “gear tunnel,” a compartment between the truck bed and cab.

But this time we’re seeing some photos which didn’t come from Rivian itself, but an enthusiast who spotted the trucks undergoing some off-road winter testing.

Tierra del Fuego is quite rugged terrain, and a popular place for off-road adventures.  Furthermore, even though it’s the height of summer in the Northern hemisphere, Tierra del Fuego is experiencing rather low temperatures right now as they go through winter.  Days are just above freezing temperatures, and snow is expected in the region at this time of year.

The Rivian R1T is being positioned as an “adventure truck” meant for camping, offroading and harsh conditions, so this is a perfect place to undergo testing, particularly at a time of year when all we have is heat in the Northern hemisphere.

Two trucks were spotted, and they look like they’ve been having a good ol’ time in the dirt.

The front end is largely unchanged from the concept, with Rivian sticking with its controversial (to the relatively design-conservative truck crowd anyhow) headlight design.

In the concept version of the car, the charge port was on the passenger side.  It has been moved to the driver’s side in this preproduction version, as shown in this picture: 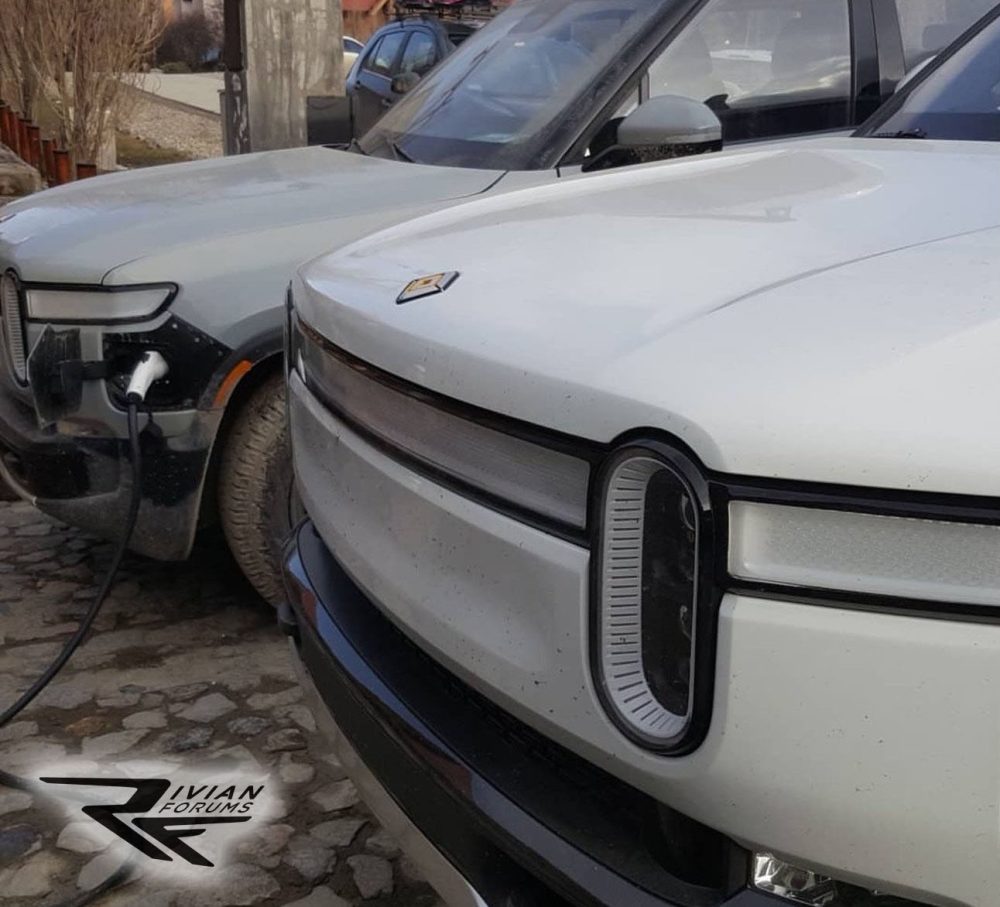 This is our first look at a white paint scheme for the Rivian, and the flat gray paint also differs from the shiny metallic silver we’ve seen since the unveiling.

The tailgate design looks to be a little more subtle than the concept version, or perhaps that’s just an effect of the flat vs. metallic paint.  The “R1T” badge in the lower left corner is new.

The diffuser and bumper have changed, and look a little “flatter” now.  It looks like this might possibly improve ground clearance by a small amount (compare how visible the suspension links are between photos of the concept and preproduction versions of the car). 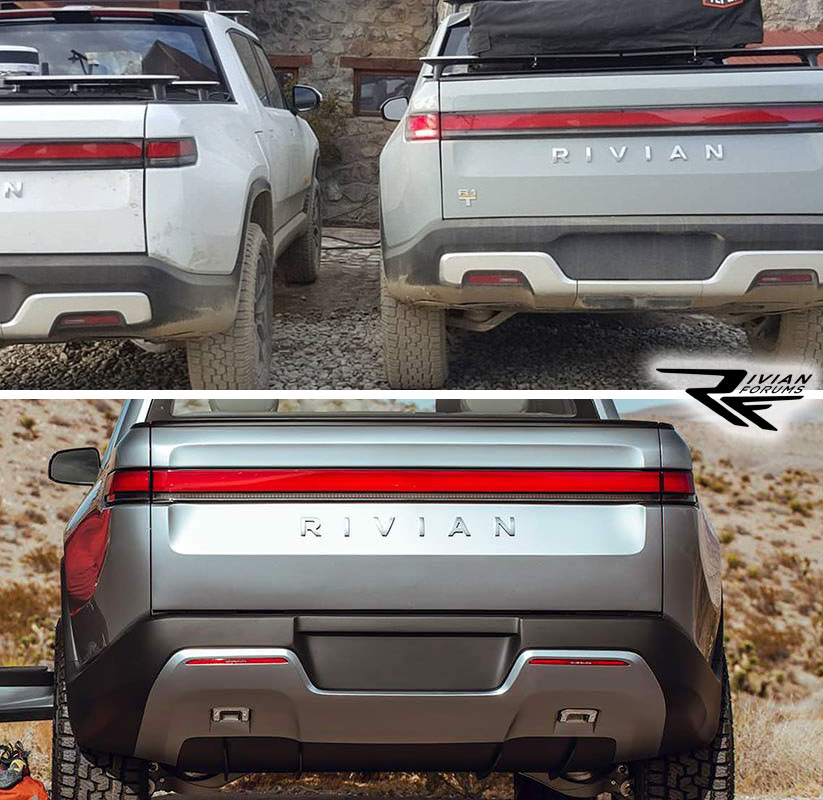 There are significant changes to the interior, with a lot more buttons on the steering wheel and a new interior color (“mountain black”).  The concept interior we saw at the LA Auto show was mostly gray, and looked quite nice, but seemed very much like a concept car interior.  This interior includes some devices for engineering testing, such as an emergency disconnect and various other switches underneath the center screen, which obviously won’t be in the production model.

(**Update: as stated at the top of this post, Rivian has reached out to let us know that the production interior will look much more like the concept car, and that the interior on this test vehicle is not representative of production intent)

We’re all quite excited about the Rivian here at Electrek.  Personally, I think it’s the most exciting thing in the entire automotive industry today.  The truck looks really great, is well-thought-out, and the Rivian employees we’ve encountered seem to be a clever, driven lot.

That’s why Fred put down a deposit when we first saw the truck last November, and ever since then they’ve just been showing off more cool stuff like a modular bed system and removable auxiliary battery.

Now all we need is for them to get it to market.  This is not an easy task, though big investments from Ford and Amazon should help a lot.

Rivian is targeting 2020 for release still, which seems rather soon, but this winter testing bodes well.  It’s one thing to show off a car at an auto show, and another thing to actually take it out into the wild and get dirty.  They seem to have cleared that hurdle, now they just need to figure out how to make and sell tens of thousands of these…

It’s going to be a hard road but we’re excited to see them do it.