Rivian has filed for a patent to expand the energy capacity of its upcoming R1T electric pickup truck through a novel auxiliary battery which can be added to the truck’s bed after manufacture.

The patent was filed last year, published last month and today is marked as “pending” by the US patent office.

The Rivian R1T also has the largest battery in a consumer vehicle yet, largely because it’s going to be a big, heavy vehicle with relatively poor aerodynamics (when compared to electric compacts/sedans). Rivian is also marketing the R1T for the “adventure truck” market, which will tend towards more range-heavy use cases. Some of the more remote adventure destinations may not have charging points nearby (though 50A RV hookups offer good overnight charge capacity), and towing large equipment will also result in reduced range.

To address these concerns, Rivian has already talked about installing quick charging points at common “adventure destinations” which might not otherwise see so many EV charger installs.

But now we’re learning details of another method Rivian is planning to use to extend the energy capacity of the R1T.

At the front of the R1T’s truck bed, there are multiple connections, including integrated cooling circuits, to lock in a temporary “auxiliary battery” which would increase the energy capacity of the truck temporarily. The battery would fit into the R1T kind of like a standard truck bed toolbox, according to diagrams attached to the patent application. 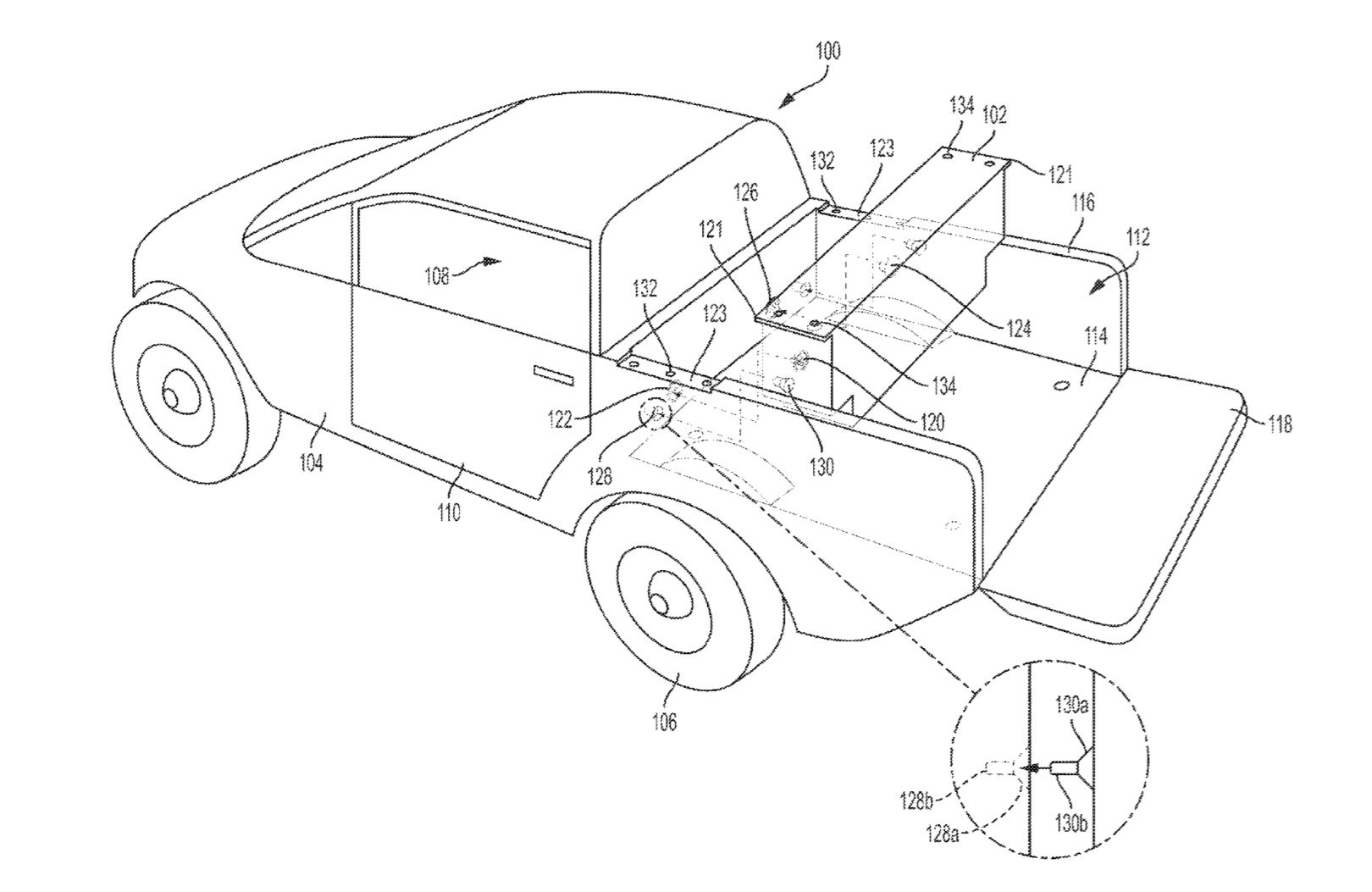 One interesting note is that the batteries do not go in the R1T’s “gear tunnel”, the lockable storage area behind the passenger compartment and in front of the truck bed. This seems like it would have been a natural place to put them, but perhaps installation is simply easier in the truck bed. The patent describes the installation method as either via forklift or being lowered in from above via winch and cables.  Then it is bolted into place along the sides of the bed.

There’s no information yet about size or cost. But this is additional capacity over and above the standard 105/135/180kWh capacity options. Given the size of the battery, it could be another 50-80kWh or so with the newest energy dense cells, which would result in a pretty massive amount of energy storage and lots of possibility for backcountry adventure.

Rivian also plans to produce the R1S, an electric SUV, though this patent only covers auxiliary batteries for the R1T, the electric pickup truck.

You can read the full patent at the bottom of this post.

We are quite excited about Rivian here at Electrek, and this seems like another good idea — with a few caveats.

Personally if there were some way for me to have an 80-100 mile battery for everyday use in my car and then “upgrade” with an extra one or two hundred miles on days or weeks where I think I’ll need it, I’d be happy to have that.  So in concept this seems like the kind of thing I would want.

We don’t know yet what Rivian’s business plan is with this and whether this will just be a one-time add-on for more permanent capacity after purchase, or if Rivian is planning to allow temporary “rentals” of additional capacity for owners who are planning a big adventure. Rivian CEO RJ Scaringe has spoken before about this calling it a “digital jerrycan,” which makes it sound like they’re considering temporary rentals.

There have been attempts before to do something along the lines of temporary batteries, notably from Tesla and Better Place. If you haven’t heard of the latter, it was an Israeli startup company which planned to have a fleet of electric cars with swappable batteries, so that owners could drive to a battery swap station, get a new battery and drive off. Their plans never quite worked out, and the company went out of business in 2013.

Tesla also tried a battery swapping idea, but this would have been better than Better Place’s, as Tesla floated the idea of allowing people to “rent” a battery with higher capacity for roadtrips, then return to get their original lower capacity battery back for normal use. The company started a pilot program with one swapping station on the 5 freeway in California, but found that they couldn’t get any owners to use it – owners preferred to use Superchargers as they got out and stretched their legs for lunch. So Tesla killed the pilot and is no longer publicly pursuing any battery swapping plans.

So the idea of “auxiliary batteries” in an EV has been tried before and hasn’t done so well.  But could Rivian do it better?

It does seem like their platform would be a better fit for this idea than Better Place or Tesla’s.  Rivian’s plan is for “auxiliary capacity,” so owners will always keep their own battery under the truck.  This was something which held Tesla owners back from using their swapping system, because owners didn’t want to think they would get someone else’s (possibly more degraded) battery after using the system.

The use case for Tesla and Better Place was also more limited, because either of these cars were likely to stay on roads, where it’s easy to install chargers, and were likely to have relatively steady energy demands, since they weren’t being used for towing. The R1T’s energy demands could vary widely depending on what it’s being used for, as off-roading and towing are both very energy intensive activities and are likely to happen in more far-flung locations where there may not be access to charging.

So the use case is there for Rivian in a way it wasn’t there for Tesla or Better Place. It seems a better fit.

There are a couple downsides, which is that you’ll lose some of the R1T’s already-small bed space, and this may reduce towing capacity slightly due to the extra weight over the rear wheels of the vehicle.  But as the vehicle already has 11,000lbs/5,000kg of towing capacity, it should still be enough to tow a small boat, ATV, or even a car trailer.

Another is that installation seems difficult. This is really what stopped Better Place and Tesla from pursuing this avenue, as charging was so much easier to install, and have less intrusive facilities.  This allowed Tesla to charge less for supercharging than for battery swapping, and customers were happy to take the less expensive option if they were stopping for lunch anyway.

Rivian will have to find a way to move several hundred pounds of batteries into the back of the truck in a way that’s convenient for owners, and price it thusly.  The suggested method in the patent means these would be installed in a dedicated facility, which means Rivian would need to keep batteries on hand in these facilities, and perhaps anticipate demand in big adventure destinations (stocking up on batteries in Reno ahead of Burning Man, perhaps?).  This could be costly in terms of logistics, and depending on the cost to the end user, the economics of it might make this a little less attractive than either waiting for a charge or bringing a generator and a jerrycan full of gas (yuck) with you.

If they can work it out in a way that’s convenient and economical for owners, and better than charging or bringing a generator, this would be great. It certainly looks like a cool idea, but how realistic it is is still up in the air.

What do you think about this idea? Have a look at the patent filing and let us know your thoughts in the comments below.