Here are all the coolest EVs we saw at EICMA 2018: Milan Motorcycle Show

This year’s EICMA 2018 Milan Motorcycle Show was a site to behold. In addition to the standard endless booths of gas-powered motorcycles, this year saw a huge number of new EVs.

Check out all of the coolest, most interesting and even some of the weirdest new EVs we saw there.

Over the last few days we wrote a number of articles on new debuts and unveilings. Here’s a quick recap so you can check out the newest releases:

We also saw a number of really interesting EVs that we couldn’t fit into their own post or weren’t brand new but were still recently released and worth checking out.

So here are all of the other awesome EVs from the 2018 Milan Motorcycle Show. And make sure you vote on which was your favorite in the poll at the end of this article!

We’ve been eagerly following the progress of Piaggio’s first electric Vespa, the Elettrica. 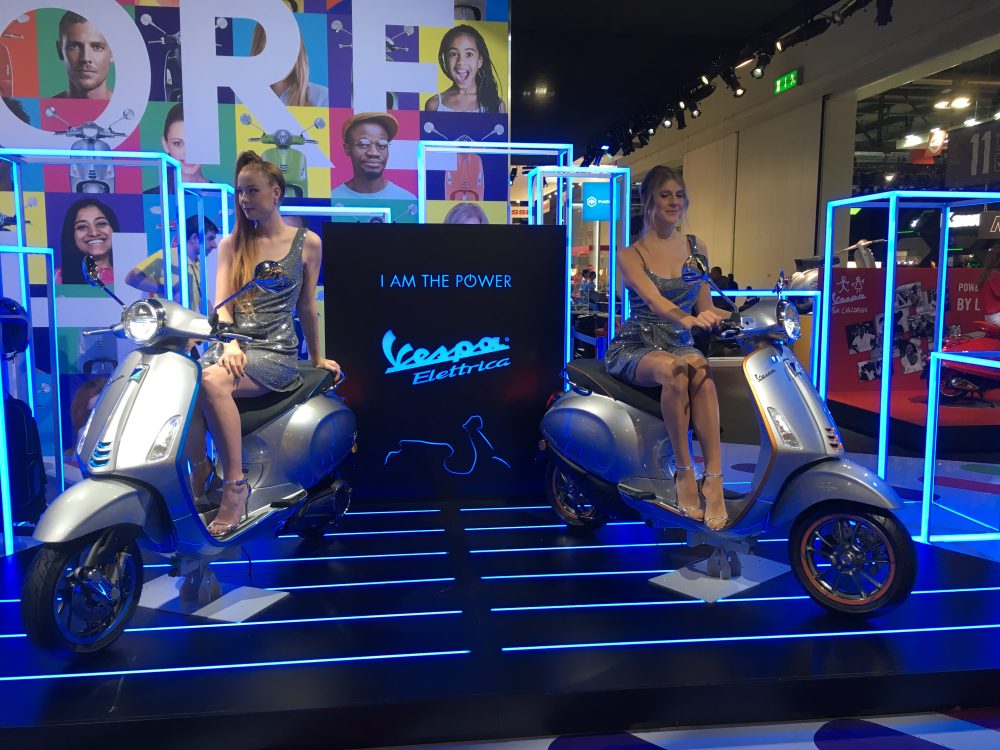 The original concept was first unveiled at this show two years ago, but the company was dragging its feet in regards to development. The Elettrica finally entered production last month, and the first models were on show in all of their Vespa styling glory.

I really like how Vespa kept the retro look, which fits nicely in their existing lineup.

However, the price is a bit crazy at just north of $7,000. For that I can get three NIU electric scooters, which basically look like futuristic Vespas.

Still, the Elettrica is an undeniably good-looking electric scooter.

Kawasaki showed off their new line-up of electric bicycles developed in a partnership with Merida.

A Kawasaki electric road bike featured the new Fauza motor and battery combo. We first saw this setup at Interbike 2018 in Reno. The system allows the rider to remove not just the battery but also the motor, which are both mounted in the down tube. That allows an electric road bike to turn back into a regular road bike without the weight penalty of the motor hanging around for the ride.

NUUK showed off a number of large electric scooters with impressive motor and battery capacity.

The electric scooter is a bit of a beast compared to smaller offerings, but that should result in a stable ride. A rear seat makes it easy to carry a passenger rather comfortably too.

NUUK also offers a cargo version of the same scooter with a giant cargo box in place of the rear seat.

Lastly, NUUK showed off a third version that seems to be more of a street bike. All of the scooters had similar specs, with the changes mostly consisting of body and riding geometry.

We covered the Appscooter by Etergo after it was first unveiled, but I’ve never actually seen one in the flesh.

I have to say that the Appscooter has probably the best modular scooter batteries I’ve ever seen. 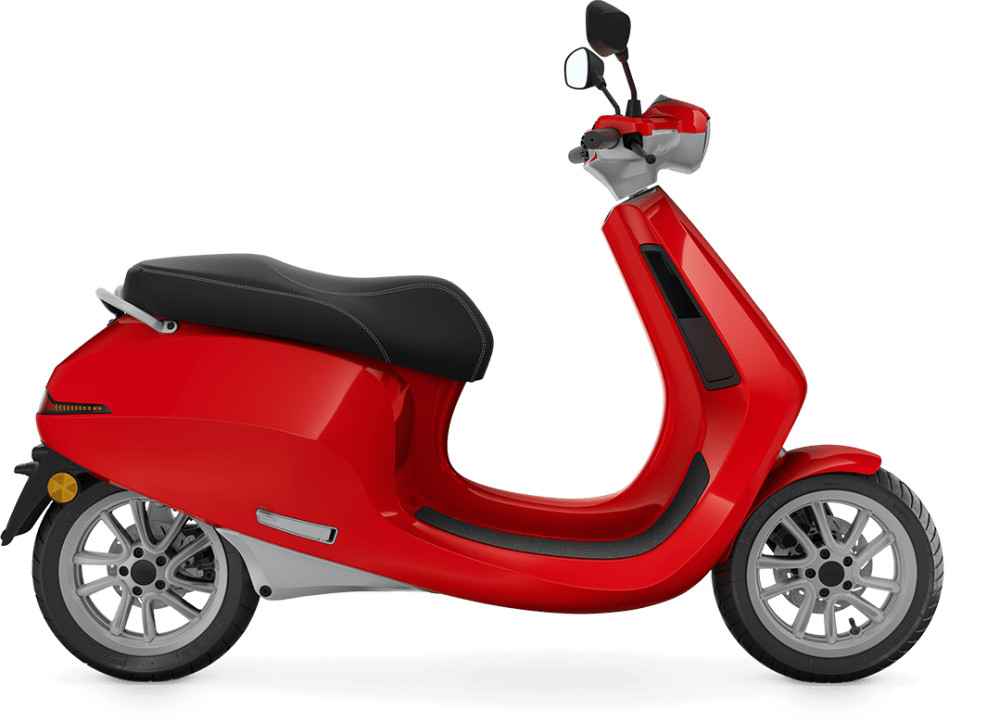 Electric scooter batteries are almost always large bricks that sit under the seat. That means they take up valuable cargo space – leaving many electric scooters with zero storage at all.

But the Appscooter has these crazy looking banana-like batteries that slide down under the foot area of the scooter. That means they don’t take up any of the cargo space under the seat. In fact, Appscooter likes to demonstrate how much cargo space is left by showing the scooter carrying a 20-bottle case of beer.

In addition to the awesome batteries and ample storage space, the Appscooter is also a smart, connected scooter. By pairing it with your phone, you can access a number of features including GPS navigation, bluetooth calling, anti-theft and tracking features, etc. 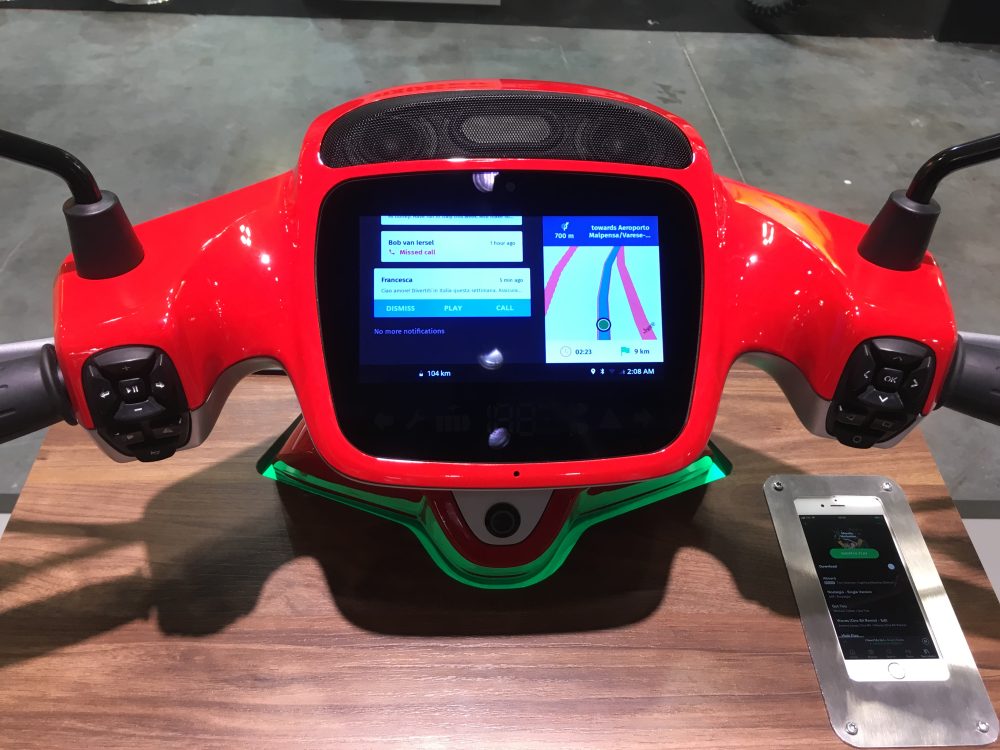 The Appscooter should be available in Europe by the third quarter of 2019, at a price of around €3,300. This is one I’ll definitely want to try out as soon as it’s available.

One of the cool things about electric scooters and mopeds is that their removable batteries make them easy to charge. Riders can leave their scooter parked outside and simply carry the battery into their home or apartment to charge.

However, most 1-1.5 kWh batteries already weigh around 10-12 kg (22-26 lbs), which is getting on the upper end of what you can except an average person to carry for any decent distance. That has been a limiting factor for many scooters, forcing either limited battery range or multiple smaller batteries.

But Silence scooters showed off an alternative approach. To fit giant batteries in a scooter and still make them removable and transportable, the company simply added wheels and a luggage handle.

Another cool feature is that the batteries include a built-in inverter, meaning you could plug your devices such as chargers and appliances directly into the battery. At a picnic and want to power a speaker? Need to run your Burning Man light show? Stuck without power or a generator after a storm? Here you go!

Another nice feature of the low-mounted batteries is that the underseat storage compartment remains large enough to fit two helmets.

I’ve never seen one in the flesh before, and I was actually pretty impressed with the little e-moto. It was even bigger than I thought, as early photos made it look absolutely tiny.

The City Slicker was hanging out at the Zongshen booth, which is the Chinese motorcycle manufacturer that produces it. This model is available elsewhere under different names, but is imported to the US as the City Slicker.

Is an electric Smart car just too big for you? Then do I have the car for you!

The Why Not, manufactured by the Italian company Elettricars, is an adorable little four wheeled neighborhood electric vehicle (NEV). 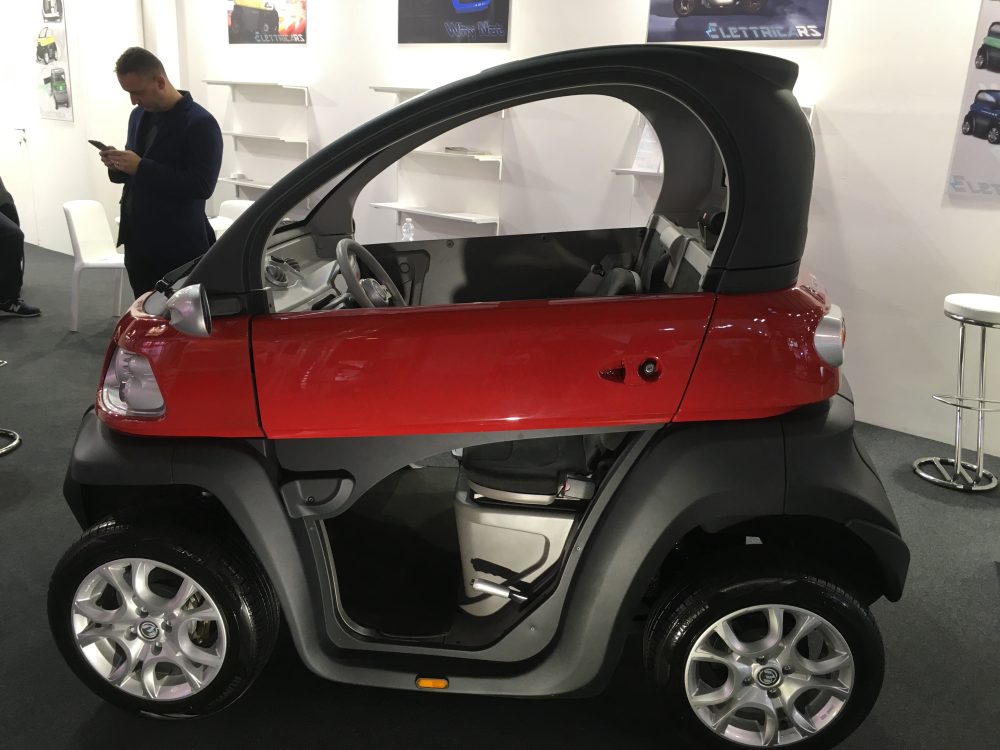 If you can get past the name, the Why Not is actually a nice little electric car. It has a conventional steel frame chassis, solid rear axle and McPherson front suspension – the standard automotive front suspension originally developed by Chevrolet. The interior isn’t luxurious but it has everything you might need.

Elettricars handles most of the design and fabrication of the Why Not itself, including the engineering, chassis welding, body moulding and painting.

That’s 17% shorter and 25% narrower than an electric Smart Fortwo – not to mention 60% lighter. 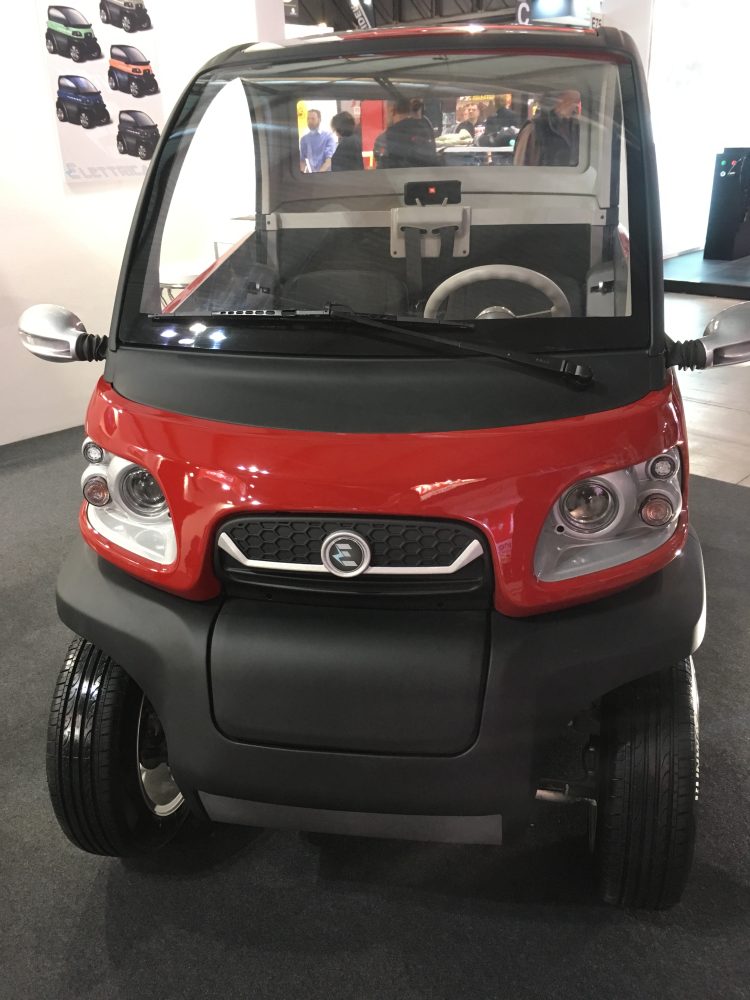 And with 300 L of trunk storage space, this would be a decent grocery-getter.

Plus they even have an open-top model, which I guess would be the Why Not Roadster?

I must admit that I was wondering why the company decided on the odd name. But then I realized the answer was staring me in the face the whole time – “Why Not?’

You’re probably wondering what the point of a vehicle like this is. I actually believe that low speed electric vehicles like the Why Not have a real place in the transportation ecosystem. I live 1 mile from the supermarket. It makes no sense for me to drive a 3,000 lb vehicle there to grab 20 lbs worth of groceries. Sure, I could walk it or ride an electric bicycle, but that’s a long way to carry groceries, especially if the weather isn’t nice. But a little electric car like this would be perfect. I wouldn’t need highway speeds or crazy acceleration. I just need a comfortable way to move myself, a passenger and a pile of stuff around my local area. And that’s exactly what these kinds of microcars and NEVs are for.

V-ITA showed off some nice looking electric bicycles with a sleek design. I would have loved to get better photos of these cool looking e-bikes, but I swear their booth had more flashing, strobing and color-changing lights than Saturday Night Fever.

V-ITA’s unique angle, in addition to the novel frame design, is that they offer a number of different customizable options from color schemes to details to wheel style (I really like the mag wheels). That means there are hundreds of thousands of final combinations and you could very well have a one-of-a-kind e-bike.

Here’s a decent glamour shot to give you a better idea. And word to the wise: skip the crazy light shows at exhibitions if you want people to be able to see your bikes in detail! 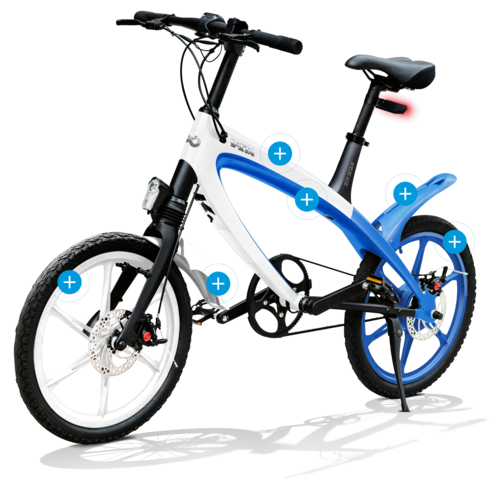 We covered the UJET when we first heard about it over the summer, but now we finally got our hands on it.

This is one of the coolest scooters I’ve ever seen. It has hubless wheels but retains disc brakes, both wheels are single supported, and the scooter even folds up. You can literally wheel it into an elevator and up into your apartment as if it was a moving dolly or hand truck. The entire scooter weighs just 49 kg (106 lbs), including battery.

And considering this luxury scooter costs almost $10,000, you’ll probably want to bring it inside at night.

But if you did want to leave your scooter parked outside and just bring in the battery, it detaches and turns into something akin to rolling luggage.

The whole scooter just looks really well designed, and has a pile of “smart” features as well using WiFi, Bluetooth and GPS connectivity.

Check out the video below showing the scooter folding up to be wheeled around like nothing by a woman who probably weighs less than the scooter itself.

Otto Bikes debuted their new MCR II electric motorcycle at EICMA 2018, and it’s a very nice bike. The bike comes in two models, one with a 4 kW hub motor and the other with a 5 kW central motor.

A cool feature of these electric motorcycles is they have a number of smart functions built into the center display, including phone calling integration, mapping, rear camera view and other features. 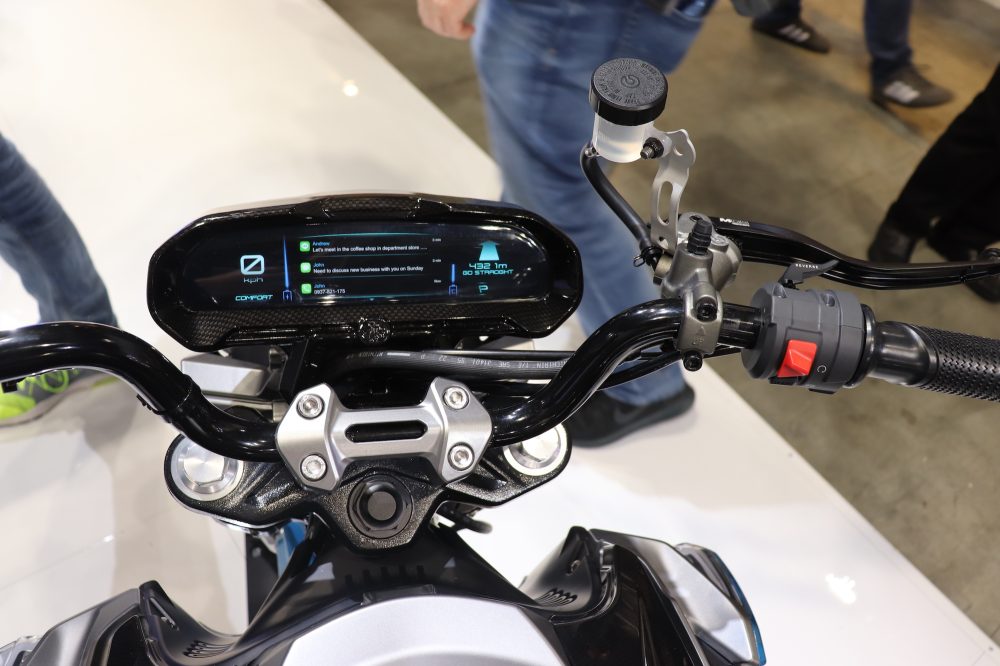 The bikes are still undergoing homologation for the EU and will hopefully one day be ready for the US as well. For now though we don’t have a firm date on when these e-motos will be available anywhere. But when they finally are, we’ll be first in line for a test ride.

And there you have it. That covers pretty much everything we found notable at the EICMA 2018 Milan Motorcycle Show.

It was certainly impressive to see just how many electric vehicles there were at the show. Even though gas bikes are still dominating the industry, their years are certainly numbered.

In the next few years I wouldn’t be surprised to see a nearly equal distribution of gas and electric bikes at the world’s premier motorcycle show. And while we wait for that, we can take comfort in the impressive breadth of new and existing e-moto and e-scooter designs in the market. It’s a great time for electric riders everywhere!

What do you think of the offerings at this year’s EICMA 2018? Vote in the poll and let us know which was your favorite in the comments below.