How does a $2.5K City Slicker electric motorcycle compare to a $16K Zero?

Electric motorcycles are a booming subsection of the electric vehicle industry, with new offerings popping up on our radar fairly regularly. Compared to full-sized electric cars and trucks, electric motorcycles are easier for companies to develop and produce due to their lower complexity, fewer parts, smaller sizes and reduced regulation.

One of the most talked about new electric motorcycles just released in the US is the $2,495 CSC City Slicker, an e-moto that we covered when it debuted earlier this summer with an even more enticing $1,995 price tag. But how does a budget electric motorcycle compare to higher end models like those from Zero Motorcycles?

When it comes to electric motorcycles, it’s hard to find anything more budget-friendly in the US than the $2,495 CSC City Slicker.

On the other hand, the $16,495 Zero SR is one of the nicest and most state-of-the-art electric motorcycles available, without getting into rare and exotic electric luxury motorcycles.

The two electric motorcycles basically represent the two ends of the reasonable-use spectrum for every day driver e-motos.

And thanks to the first hand account of motorcycle enthusiast and Exhaust Notes writer Joe Berk, we can really dive in and compare the advantages of the two electric motorcycles that are so similar in concept yet so different in execution (and price!).

The first thing to consider is that these two electric motorcycles are not intended for the same audience, so don’t expect a direct head to head here. As Berk explains:

“These motorcycles are different tools intended to meet different needs for different riders. The good news is they’re both fun. A lot of fun, actually.”

Consider first the speed and range specs: The City Slicker is rated for 46 mph (74 km/h), though real world GPS tests have shown the real top speed to be closer to 42 mph (68 km/h), which means the City Slicker’s speedometer reads slightly optimistically.

It is immediately apparent that the City Slicker is for getting around the city, with speeds fast enough to keep up with and probably even overtake traffic on nearly any urban road.

On the other hand, the Zero SR is a highway-worthy electric motorcycle that is capable of adrenaline-pumping speed and acceleration.

And the bikes are also built accordingly. The City Slicker has a modest 3.2 kW peak motor, while the Zero SR has a 52 kW peak motor.

Berk translates those differences into something easier to understand:

“I like it when a motorcycle accelerates so hard it scares the hell out of me, and the Zero did that. In the Sport Mode, the SR has a punch in the pants that is downright terrifying. Zero advertises that their bike will out-accelerate a Porsche 911.  I didn’t have a chance to check that out, but I’ll take their word for it. Bottom line: I thought that was very cool. I liked it. A lot.

The City Slicker’s acceleration is more manageable. It had no problem keeping up with city traffic when the light turned green. It’s maybe a notch into the ‘wow’ range the first time you ride the bike, and then it just becomes part of the experience. On the Zero, it’s simultaneously awesome, exciting, and terrifying.”

So the acceleration and torque on the City Slicker are impressive but manageable, while Zero SR is mind-blowing.

The battery capacity on the two vehicles is also a big differentiator. The City Slicker has a 2.1 kWh Li-ion battery while the Zero SR has nearly seven times the battery capacity at 14.4 kWh. The Zero is the obvious winner here, since more is usually better. But a unique advantage of the City Slicker’s smaller battery is that it is removable. Thus, you could presumably park on the street and charge the battery in your living room, though you’ll have to lug around the approximately 35 lb (15.5 kg) battery to do it. 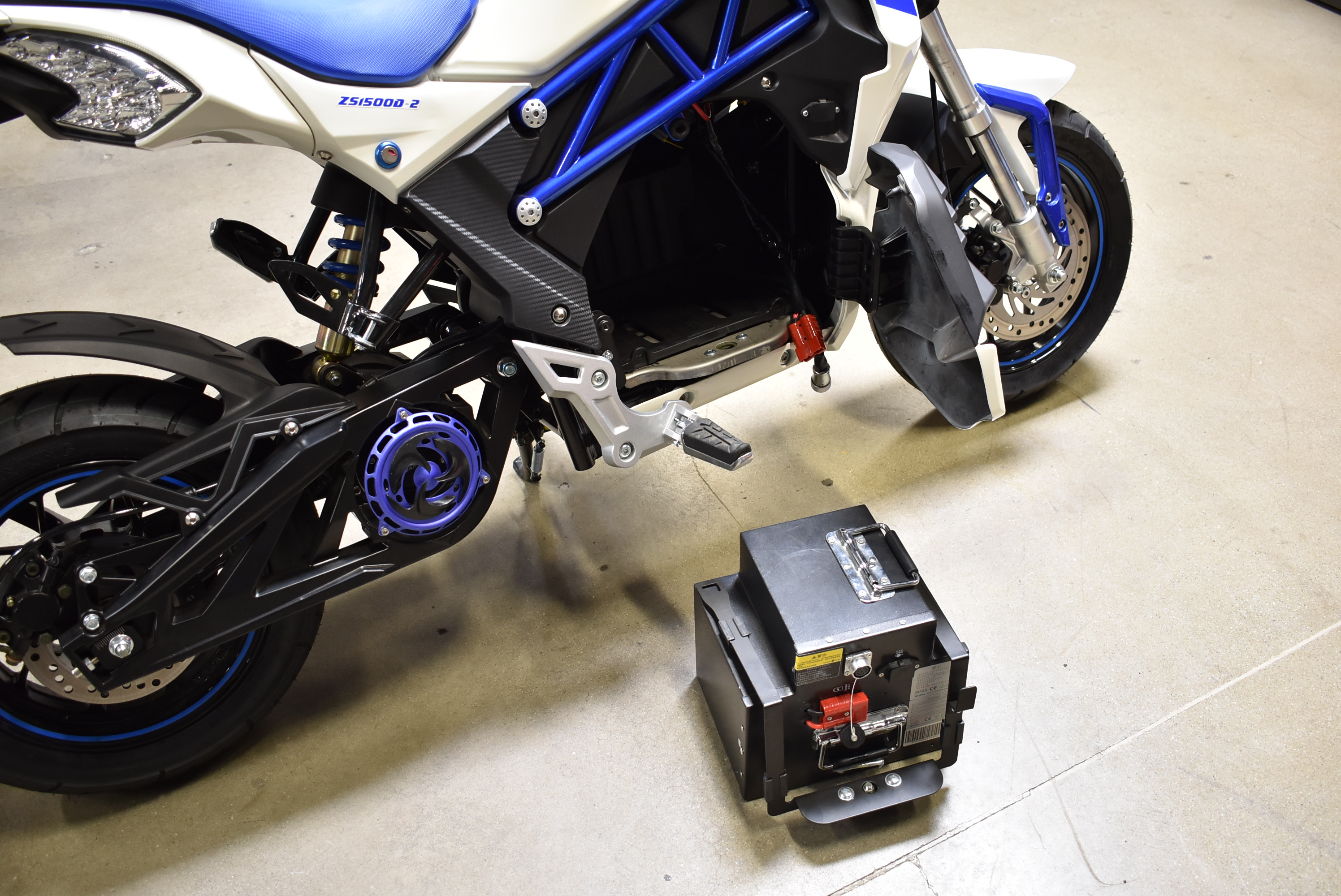 So on pure numbers alone, the Zero has 16x the peak power, 7x the battery capacity, 5x the range, and 2.5x the speed, though it also costs nearly 7x as much. After the hard numbers, many of the specs and parts are quite similar, though likely different power ratings commensurate with each vehicle’s speed.

Both have hydraulic dual piston front and single piston rear brakes (though the Zero has nicer ABS brakes and nice big rotors). Both have belt-driven mid-drive motors, removing the chain noise to create a truly quiet electric vehicle. Both have oil dampened inverted front suspension and single coilover rear suspension with adjustable pre-loads, however the Zero is definitely a more comfortable ride. The City Slicker has around 4.2 inches (10.6 cm) of front and rear travel while the Zero SR has closer to 6.2 inches (16 cm) of front and rear travel, though it is a larger bike at nearly twice the weight (216 lbs or 98 kg vs 414 lbs or 188 kg).

Again, these aren’t the same parts. Obviously the brakes on a 100 mph bike are going to be stronger than those on a 40 mph bike, but the design and execution is surprisingly similar.

Even though both street bikes share similar designs, we should also consider build quality. While you might assume the Zero SR is a piece of art while the City Slicker is a rolling bucket of bolts, you’d be surprised. Well, surprised about the second part at least, since the Zero SR really is a masterclass in electric motorcycle building.

Berk reports that the City Slicker has a build quality that defies its low price tag:

And don’t delude yourself into thinking you can see the price differential in the build quality of the two bikes.  They are both well made.  Fit and finish on both bikes is world class.  If you want to argue that the City Slicker is a cheap Chinese piece of junk, you have my permission to demonstrate your ignorance on an Internet forum or in the Disqus comments on any of the many articles recently written on the City Slicker. But you’d be dead wrong.

At the end of the day, these are both very capable electric motorcycles that excel in their own environments, even if those environments aren’t the same. If you’re looking for an affordable street bike solely for city riding and never plan to hit the highway, you can save a ton of money with the City Slicker. With its smaller and more nimble wheels, it’s built for navigating cities and lives up to its name.

But if you want a state-of-the-art electric motorcycle with performance that will fill your eyes with tears and your teeth with bugs, plus has the range to make charging only a sporadic chore, then the Zero SR is the cream of the crop.

Either option is another step towards displacing gas-powered vehicles and replacing them with environmentally responsible (and fun!) electric vehicles. And if they help remove space hogging cars from our already crowded cities, then all the better.