There’s no doubt that scooters and mopeds are convenient ways to navigate busy cities, solving problems from navigation and parking to pollution. Now, UJET is trying to make them even better, smarter and smaller, not to mention fully electric.

Smart connectivity via an onboard GPS, 3G, Wi-Fi and Bluetooth equipped computer allows the UJET to be controlled by the user’s smartphone, performing tasks such as locking and unlocking, location features (“where did I park?”) and anti-theft protection including tamper notifications.

The vehicle’s app can also guide you to service locations if you have a problem, and uses an array of 20 sensors located throughout the scooter to provide real-time monitoring of the scooter’s systems.

The onboard camera can record all of your rides, whether for fun or for use as a dash cam if needed. An integrated and sleek flip-up display shows all the usual driving parameters such as speed, battery life, efficiency, etc. 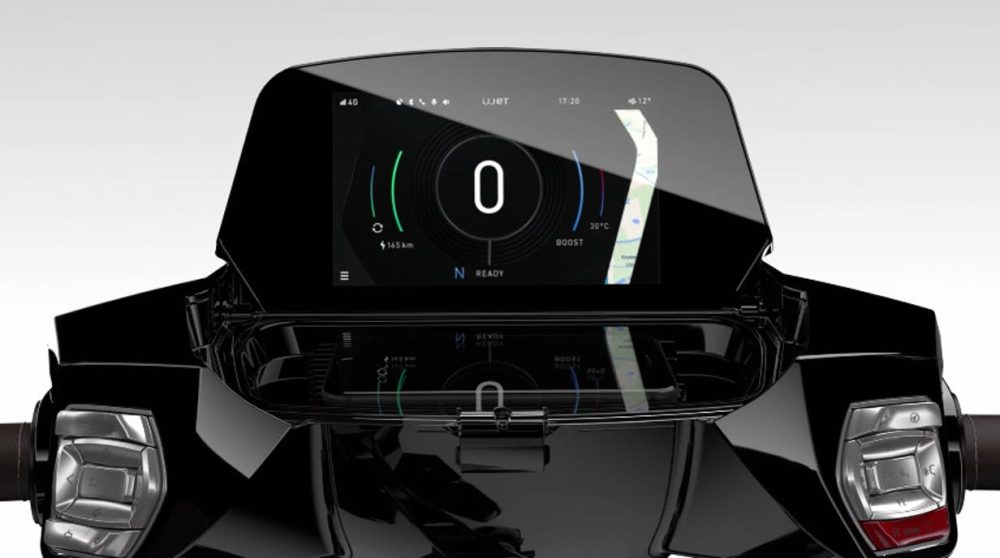 The scooter itself includes streamlined and progressive design notes, immediately apparent from nearly any angle. The frame is entirely asymmetric, with single-supported front and rear wheels.

Speaking of the wheels, you might have noticed those look strange too. They’re spokeless orbital wheels, with a 4.05kW electric motor integrated into the rear wheel, providing 90 Nm (66.4 ft lbs) of torque. The TUBALL tires incorporate carbon nanotubes, which UJET claims can double the handling performance of the tires in all-weather conditions. 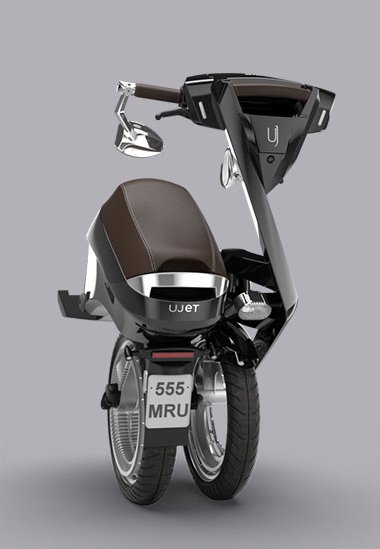 The battery comes in two sizes that provide either 43.5 mi (70 km) or 93 miles (150 km) of range. The battery itself is incorporated into the seat, which is a removable structure similar to a rolling suitcase. It features a carry handle and wheels for rolling it around with you. The removable battery also doubles as a super-large battery bank and even a bluetooth speaker. Recharging can be performed from any standard wall socket and takes just 2 hours. 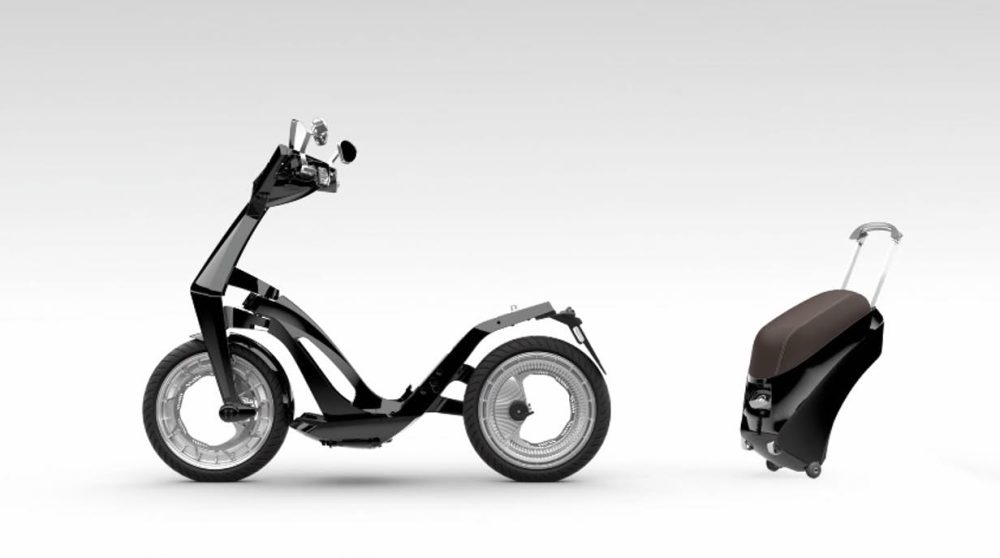 The entire scooter weighs just under 95 lbs (43 kg), meaning its light enough to walk around easily, even in its folded form. The top speed is electronically limited to 28 mph (45 km/h).

Certainly not a budget scooter, the price ranges from $8,900 – $9,900 depending on the battery size. Initial deliveries for the UJET scooter will begin in Europe in the next few months, and it should be available in the US later this year, according to the company.

These types of folding electric scooters are mostly meant to be intra-city Vespa substitutes and are actually well suited for last mile type trips in urban areas where you can easily zip around cars and beat traffic, shaving valuable time off your commute. However, the low top speed of the UJET is quite limiting for any roads where traffic regularly travels above 30 mph, meaning this likely won’t replace your entire commute unless you already live in the city.

Because the top speed appears to be electronically limited, hopefully UJET will be releasing an upgraded model (or perhaps even a software mod) to allow for higher speeds. This would make the scooter much more versatile and potentially allow suburb-to-city type commuting.

Considering the intended urban use of this scooter, it is strange that UJET included such a large battery offering between 45 to 93 miles of range. Even though this large range means you won’t have to recharge very often, it is much more than most people will ever need in the conditions that this scooter is appropriate for, and contributes to the high cost of the vehicle. If future models will be released with higher top speeds, the large battery pack will make sense, as higher speeds will require more energy.