Tesla referral program extended three months, gives owners and their friends a chance to race in a Tesla Semi 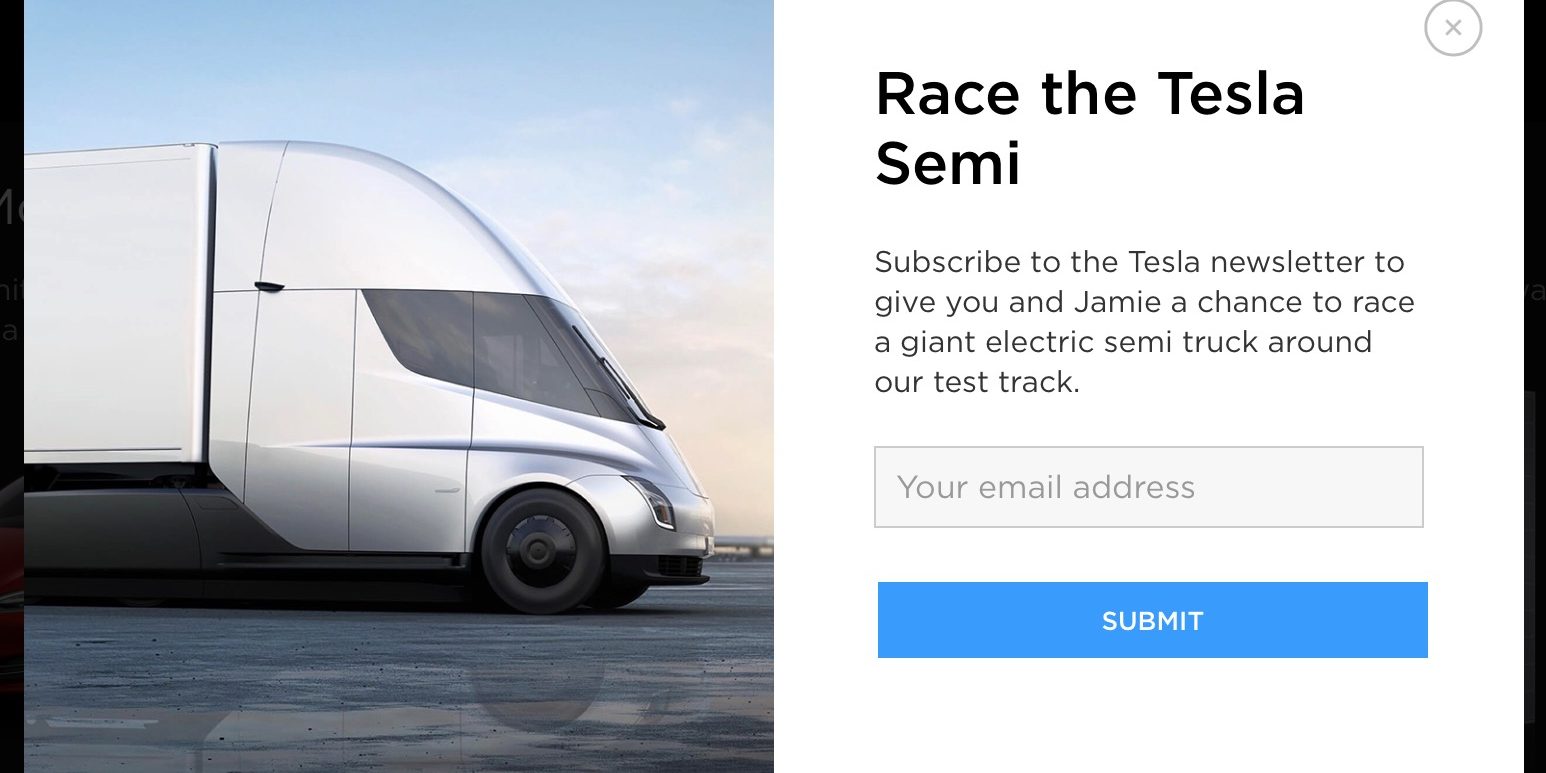 Tesla’s referral program got a midnight update today, just after the scheduled end of the previous round, which was due to end yesterday but has been extended three months.  Buyers who use an owner’s Tesla referral code on a new Model S or X will receive unlimited supercharging, and owners who refer a new buyer will get various awards based on the number of referrals they get, capping out at 5.  The program now runs through April 30th.

Tesla Solar is still included in the program as well.  New buyers get an additional 5-year warranty on a Tesla Solar installation and referrers receive $400 cash or $750 in Tesla credit for the first four referrals, and a Founders Series Powerwall 2 for the fifth Solar referral.

The one new prize in this phase of the program is a chance to drive a Tesla Semi.  This one has a lower barrier to entry – anyone who signs up for the Tesla newsletter through an owner’s code enters that owner and themselves into a weekly raffle giving both a chance to drive a Tesla Semi in a “race” around Tesla’s test track.   There will even be additional prizes for the driver with the best track time.

It looks like awards carry over from the previous version of the program – if you’ve already referred 5 people, then you’re not eligible for any new awards.  But if you had only managed to get 3 and have your eyes on a Powerwall 2, you’ve got a few months more to get that fourth referral.

But beyond this extension, two things have been added: one, the Tesla Semi raffle mentioned above, which is also now the fourth “secret level” allowing owners with 20 referrals an automatic opportunity to race the Tesla Semi.  And two, the first friend each owner refers between now and April 30th also gets $500 in “Tesla credit” which can be used for Tesla gear and services.

The other awards are unchanged, getting better with increasing numbers of referrals and culminating in an invite to a Tesla event, such as the Tesla Semi reveal.  Here’s the full list of awards for the program:

1 to 2 Qualifying Referrals: Owners can choose either of the options below for each of their first and second referrals.

3 Qualifying Referrals: Owners can choose either of the options below for their third referral.

And since the Model 3 is such a great car (in my review I muse that it’s possibly too great if Tesla wants to keep selling Model S),  it also helps that they’ve allowed the Model S and X to keep one of the features which put them a step above the 3.

There’s no mention, however, of the “annual awards” which were meant to be included in last year’s program.

These programs have been popular among owners as a way to get rewards for their enthusiasm in evangelizing the brand.  For the first few years of Tesla’s existence, owners would commonly find themselves convincing friends to buy Teslas simply based on their enthusiasm for their cars.

The idea was then floated at an annual shareholders meeting that Tesla might find some way to give back to owners who had brought Tesla so many sales, and the referral program was born.   The program has gone through several iterations since then, with various incentives in the past both for new buyers and current owners.

While owners were generally happy to proselytize even without compensation, no doubt Tesla’s referral program has resulted in an uptick in the number of blogs and YouTube channels covering all things Tesla.  We saw this at the Tesla Semi / Roadster reveal event, where there were representatives from a number of sites and channels in attendance.

If you’re looking for a Tesla referral code, lucky for you (and us), we have one.  You can use our code for unlimited supercharging on the Model S or Model X, or a 5-year extended warranty on a Tesla Solar installation.