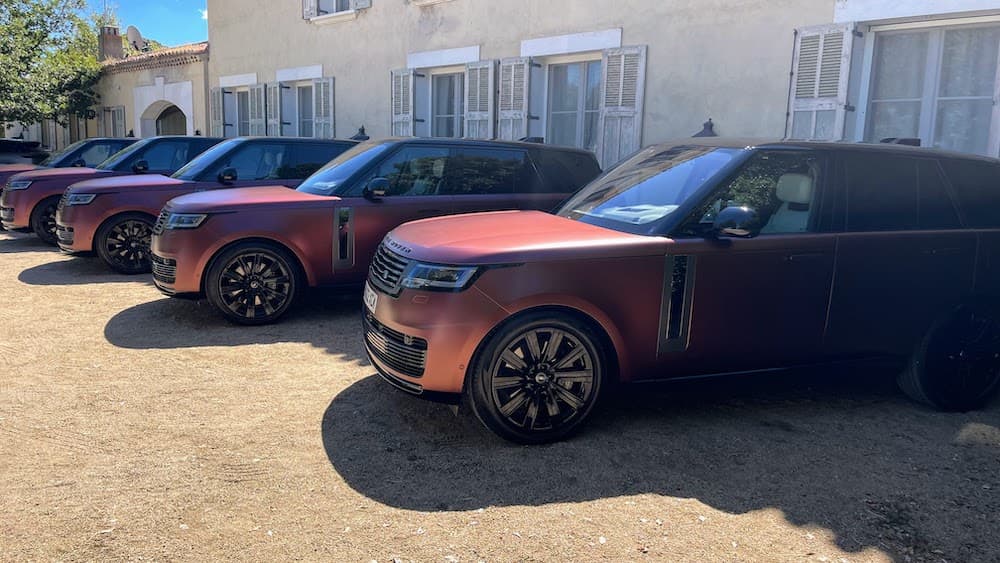 Range Rover brought us to Madrid’s swanky city center, local mountain roads, and nearby off-road tracks to test the new Range Rover PHEVs – the Land Rover Range Rover and Range Rover Sport. The result? A new appreciation for the over-the-top luxury and off-road capabilities of the British vehicles, but also, what could be waiting in the electric future of Range Rover.

First, I’ll say these are amazing pieces of luxury that drive like a highly specced Mercedes; every amenity is here from air suspension to noise-canceling speakers in the headrests. You are driving in impeccable comfort with epic Meridian sound stage – materials and seat comfort are as good as it gets. So, too, is the design, inside and out. Range Rover designers have managed to re-create the legendary rugged SUV in a strikingly modern, slippery package. There are a dizzying amount of models and options that, after a few days, I still can’t get my head around.

The technology all around is solid, but you’ll likely want to keep the center stack in Android Auto/CarPlay. Spotify is built in, as is Alexa voice recognition, but overall, Apple and Google will give you a much better experience through your smartphone projection.

One moment you are in the lap of luxury, and the next, it changes to one of the many available off-road modes; this thing will take the whole family into the deep dirt. That’s the Range Rover dream. But I imagine most, if not all Electrek readers are here to evaluate the electric drivetrain. Luckily, the Range Rover PHEV and Sport PHEV both have the same drivetrain. Because the Sport is a bit smaller and more aerodynamic, it will squeeze out a few more miles of electric range. But after having driven both, the electric performance difference is negligible, so we’ll group most of this into the more general “2023 Range Rover PHEV.”

The specs of the electric piece of the powertrains:

The first thing I noticed was the low actual miles per kWh. After all, the Range Rover PHEV’s 38.2kWh battery is almost the exact same size as the 2020 Hyundai Ioniq’s battery, which travels 170 efficient miles EPA. Obviously the Range Rover battery is moving around a much bigger, heavier vehicle, but less than a third of the range on same battery is disappointing – especially with the impressive sub-.30 coefficient of drag on both vehicles, which the automaker often touted.

Ironically, that 105kW electric motor is also similar to the Hyundai Ioniq electric’s 102kW (as well as the 7.2kW or 50kW CCS charging!), and while that size of electric motor does a pretty good job pushing around a Prius-sized vehicle by itself, it’s mostly for cruising or slow city driving on the heavier Range Rover PHEVs.

In fact, there’s still no way to keep that 6-cylinder motor from staying off when you floor the PHEV. It came on whenever significant acceleration was required, even in areas Range Rover said were EV geofenced, like Madrid’s city center. It also comes on in the cold, when the engine needs pressure, and in lots of other situations.

This mirrored my somewhat frustrating experience with the smaller trunk-mounted battery in the Range Rover Sport P400e I reviewed in 2019. Range Rover doubled the battery size here and moved the battery to the floor between the wheels to where it belongs in the 2023 models. Range Rover also moved the charging port from the front grill to the rear driver’s side of the vehicle. It still has a double door and a latch to open the charge port – which is two steps too many on something you are going to use everyday – but I imagine Range Rover wants to make everything waterproof. The charge port now adds CCS combo slots for 50kw fast charging.

I’d say that in most driving situations the Range Rover PHEVs still behave like a mild hybrid, with the ICE motor coming on quite frequently. That said, I learned to keep off the accelerator and was able to keep it in EV mode for a considerable amount of time. On the highway, it was relatively easy to keep it in EV-only mode by cruising just above the speed limit – there’s no autopilot to speak of, and the lane assist was very mild.

One of the engineers said he’d fill up the tank and get over 1,000 miles of range by also charging at home with a 50-mile round trip commute – most of his commute was electric, but the weekend errands went into fuel use. Land Rover estimates you’ll optimally get 75% of your miles in EV mode, and that’s about what I achieved during our time with the vehicles. This isn’t the type of vehicle you can go years between fill-ups, like how you can with the Chevy Volt, for instance.

The new Range Rover is also one of the few PHEVs to offer 50kW DC rapid charging capability and can charge up to 80% in under an hour, making it one of the fastest charging plug-in hybrids. Alongside the P440e Extended-Range Plug-in Hybrid model, which blends near-silent EV-only driving with effortless performance, New Range Rover is also available with a choice of a mild-hybrid six-cylinder powertrain, plus an all-new Twin Turbo V8. Customers also benefit from the choice of four- , five-, and seven-seat interiors across Standard (LWB) and Long Wheelbase (LWB) body designs. A pure-electric Range Rover – the first all-electric Land Rover vehicle – will join the lineup in 2024.

Do we really need PHEVs?

On a long-time scale, PHEVs aren’t going to be optimal. Having two separate powertrains isn’t only inefficient from a design, complexity, and weight point of view, there’s also more to go wrong. But in the short term, with the global battery supply being the bottleneck to EV adoption, I think smaller battery PHEVs make sense. Here’s why.

Say you have 100kWh of battery; that battery can either go into one big EV like a Tesla Model S, Rivian, Lucid, or Mercedes EQS, but you could also make three or four PHEVs out of this that would get full use out of this battery every day. EV drivers only use about 15-30kWh of battery per average 30-50 mile commute, so you are getting 3-4X the EV miles with the PHEV model. This of course only works while batteries are constrained.

Probably the No. 1 question I got at the event (and since) was, How do these new Range Rovers compare to Rivian’s R1S, and would I be canceling my R1S reservation?

The short answer is no, I won’t be canceling my reservation. Cost alone for me is a dealbreaker. I’m not a six-figure-vehicle guy, and my early Rivian reservation has me at $75k. Even at the current $90k price point, the Rivian is still a significant price tier below either of Range Rover’s PHEV options. These Range Rovers start over $100k and go to $200k fully kitted out.

That’s not to say that the Range Rover PHEVs aren’t the better vehicles for certain people. Obviously those who don’t want to think about range anxiety will opt to have a gas backup vs. the Rivian’s all-electric option. Additionally, I think the Range Rover’s sophisticated ride/appointments and brand image will be more attractive to the type of folks who prioritize luxury over sport.

The biggest factor, however, is delivery. If you order a Rivian R1S now, it’s unlikely to deliver even in 2023, while Range Rover RHEVs are delivering currently. You can probably just drive to a dealer and find one on a lot. In fact, if I had to bet, I think you’d probably be able to get the 2024 Range Rover BEV that the company hasn’t even announced before a Rivian R1S that was ordered today.

Other vehicles that people might want to consider here are the Kia EV9, Mitsubishi Outlander PHEV or mostly road SUVs like the BMW iX, Tesla Model X, and Mercedes EQS SUV.

Range Rovers are ultra-luxury adventure vehicles and demand their six-figure price tags. Driving one is an absolute pleasure, and knowing this ultra-luxury beast can swerve off the road and head down the gnarliest dirt path you can imagine invokes not only feelings of safety and security, but also superiority.

But I also think the company could have veered off the internal combustion engine road a lot sooner. We’re now on 2023 models, and you still can’t drive in electric-only mode. Meanwhile, if the 2015 Tesla Model X SUV wasn’t a wake-up call that Range Rover customers want to go all-electric, the excitement around Rivian has to be. Land Rover feels like a company that’s being dragged kicking and screaming into electrification, and because of that, it won’t be another two years before a full BEV vehicle is available. But they’ll get there, and I’m really excited to see what Land Rover has in store for 2024.

So that said, if you are going to buy a Range Rover today, these two PHEVs, the P440e Sport and P510e, are the ones to buy. They are quieter, more efficient, and better for the environment, as long as you can keep the internal combustion engine from cranking up.