From electric boats to surfboards, these are the wildest EVs I’ve tested all summer 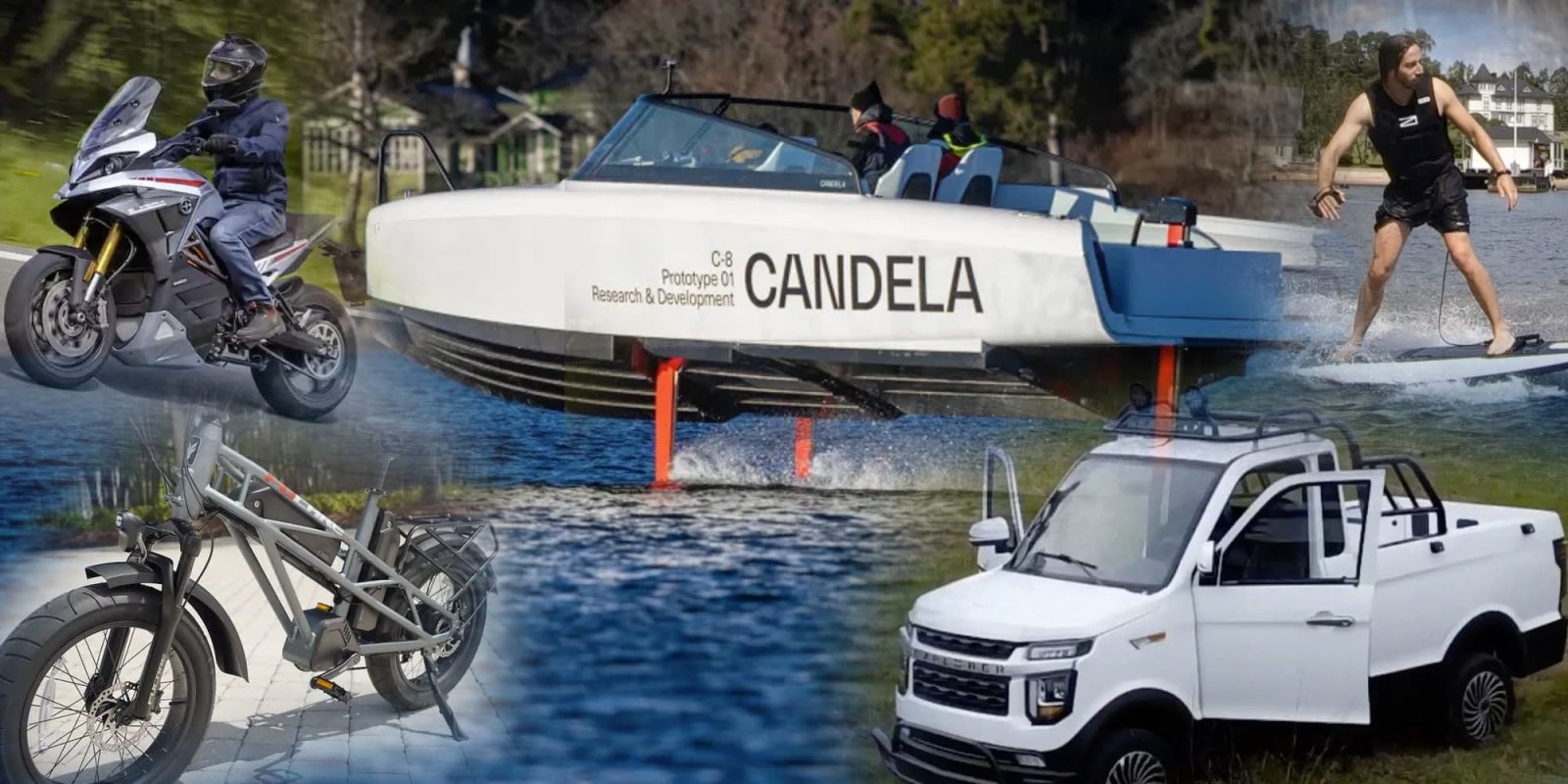 I’ve had the pleasure of testing a wide range of interesting non-car electric vehicles. From three-wheeled Fun Utility Vehicles that can hit 75 mph to flying electric boats to Harley-Davidson’s flagship electric motorcycle, it’s been a wild few years.

But this summer has been especially jam-packed with fun electric vehicles ranging from electric watercraft to e-bikes and long range electric motorcycles. These are the top five wildest EVs that I’ve tested this summer.

The Candela C-8 almost sounds like the idea of an excited child who doesn’t know the technical limits of vehicles.

“So it’s like, a boat, right? But no gasoline, it runs on batteries. And it has to go fast. But also far. Oh yeah, and it doesn’t go in the water — it flies above the water. Put a toilet in it too!”

If you try to explain it to someone, they probably wouldn’t even believe you. But as soon as you see it, you’re just in awe.

The Candela C-8 is the answer to expensive electric boats that typically require a massive battery and super powerful electric motor to overcome the inefficiencies of water travel. The boat uses hydrofoils (basically underwater airplane wings) to lift the hull right out of the water. That uses up to 80% less energy, meaning you can get by with smaller motors and batteries, and thus a cheaper boat.

It’s still super expensive, to the tune of €300,000+, but that’s because you also get a lot of boat for your money. The carbon fiber Candela C-8 hits speeds of up to 30 knots, includes luxury features like a day bed and cabin to sleep two adults and two kids, and can even be outfitted with a marine shower or toilet.

Then of course there’s the whole flying thing, which makes the ride super smooth. I suffer from seasickness on most boats, but I felt much better on the Candela C-8 because it doesn’t rock in the waves and rather flies above them. I was even able to fly right through the large wake turned up by passing cruise ships in the waterways around Stockholm. The C-8 just soared right through it as if the sea was flat.

The computer-controlled flight characteristics constantly adjust to keep the boat flying straight and smooth, and the boat can even steer hard into turns while staying up above the water.

It’s a wild experience that you’ll need to see to believe. Check out my review video below.

But the company’s unveiling of the Energica Experia sport touring bike took the company in a bold new direction.

It’s rare that I need to go faster than that, so it does the trick. But the real takeaway is the ultra-efficient ride paired with the massive 22.5 kWh battery for extra long range.

The bike is also the most comfortable of all the different Energica electric motorcycles I’ve tried. As much as I enjoyed riding the sporty Ribelle bike, my previous favorite model was Energica’s EsseEsse9.

But that was until I rode the Experia in Italy this summer, winding through the mountain roads of the Dolomites and quickly falling in love with my new favorite Energica.

The relaxed riding position, included windscreen, lower pegs, and comfortably raised bars make the bike perfect for longer rides. That’s especially good since the battery can last for up to 420 km (261 miles) in the city or 209 km (130 miles) on the highway.

So this one requires a brief backstory.

I write a fun, tongue-in-cheek weekly column here on Electrek where I find funny and odd electric vehicles on China’s largest shopping platform, Alibaba, then try to humorously describe what they could be good for.

I found this cheap electric pickup truck that is sort of 5/8 scale to a normal pickup truck. It was just $2,000 and I knew I had to have it. So I bought one and imported it from China. It ended up costing a lot more once I added accessories, paid for shipping, and then got bent over a shipping container by customs brokers. But it was totally worth it.

Ever since, the thing has turned into a bit of an internet celebrity. Across the several articles and videos I’ve made on the thing, it’s amassed somewhere around 15 million views and counting. Apparently a lot of people wanted to see my electric mini-truck.

I’ve been testing it around my parents 10-acre property, which is the perfect fit for it since it is technically not street legal for on-road use in the US. Around their ranch it is mostly used for utility tasks like hauling top soil, moving pallets, making mail runs, and other daily chores.

It even has a hydraulic dumping bed, which has been great for yard waste dumps and spreading top soil in planting areas.

With a rear view camera, air conditioning, seatbelt (just the one, even though it’s a two-seater), sun roof, and cargo rack, the thing is surprisingly well equipped. It’s been a blast to own and is hands down one of my favorite purchases ever.

These days it’s starting to seem like most new e-bikes are just copies of each other.

Since many companies rely on the same OEMs to produce the same frames, and then outfit them with the same motors and batteries, many e-bikes actually are nearly identical copies.

But the Fucare Gemini X was one of those rare e-bikes that went a totally new direction with an interesting frame design.

The trellis-style frame doesn’t just make for a neat-looking ride, it also created a perfect place to mount the battery in a protected pocket in the frame. There’s even a second battery mounted in the rear of the frame to double the range up to 130 km (80 miles).

For $1,799, it costs a pretty penny. But you’re getting those dual batteries, a fast top speed of 45 km/h (28 mph), hydraulic disc brakes, a bright and easy-to-read screen, included rack and fenders, built-in LED lighting, and a bunch more.

I’ve ridden a ton of great electric bikes this summer, but the Fucare Gemini X tickled a serious itch I had for something new and sexy.

This is another one of those, “you’ve got to try it to believe it” kind of rides.

At around €12,000, it’s unfortunately going to be hard for most people to try it. But short of that, check out my video below and then take my word for it: These are some of the most awesome electric surfboards in existence.

They can go well over 50 km/h (30 mph) and a skilled rider can perform all sorts of jumps, stunts, and more with them.

I’m not exactly a skilled rider, but even in my first session I had a blast, easily mastering the beginner board and then making a fool of myself on the more advanced board.

There’s a learning curve on their more advanced board and especially on their hydrofoil board, which rises out of the water so you’re surfing on a carbon fiber wing.

With more time to practice, I’m sure the Vinga hydrofoil board from Awake would have been fun too.

But even starting on the beginner board, these powerful and fast electric watercraft had me grinning ear to ear.

In my opinion, they beat a jet ski since you can take them to the water in the back of your car instead of needing to tow a trailer. And of course you don’t have to worry about bringing a gas can for fuel or dealing with engine maintenance.

Plenty of fun and wild EVs

This summer has been full of fun and wild electric vehicles from just about every category imaginable.

Electric cars are nice and all, but the really fun stuff starts when you step outside of the four-wheeled box.

I’m excited to see what else the industry can throw at us. Who knows? Maybe next year I’ll be back with a list that blows this one out of the water. Literally.