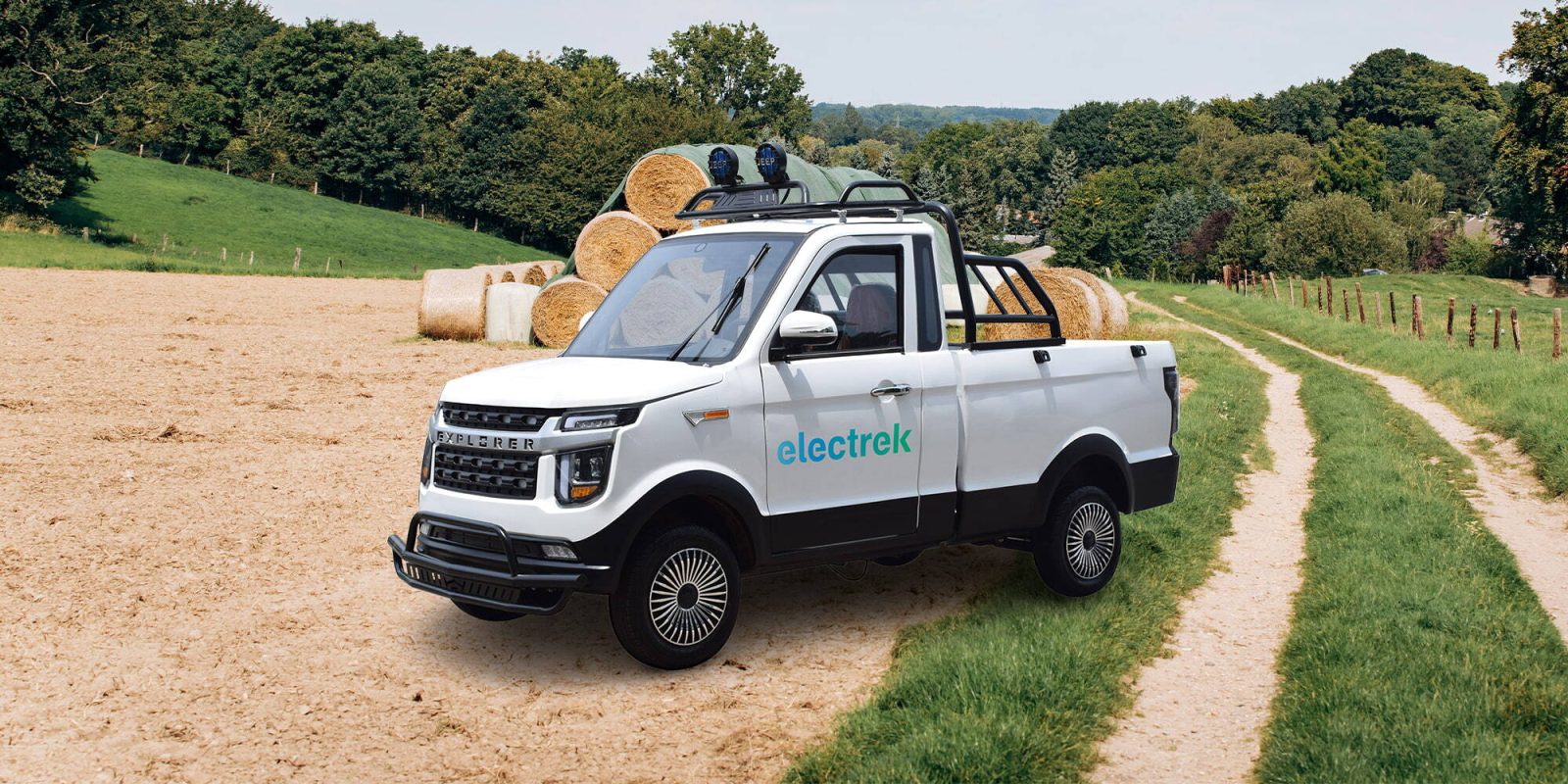 Admittedly, it doesn’t have a cool name like the Cybertruck or the electric Ford F-150 “Lightning.” Instead, this Chinese electric truck goes by the model name CLZKC-009.

That’s cool enough for me, and frankly I’ll let Ford and Tesla fight it out over the top-selling electric truck that you can’t even have yet.

I’m not sitting on $40,000 that I can plop down to wait in line for a full-size electric pickup.

But I do have $2,000 for this little guy, which can likely arrive much sooner, thanks to the factory’s 15-day lead time.

I legitimately 100% want this fun-size electric truck for no other reason than it looks like a hoot to play around with. To get there, I’ve been communicating with the company’s rep, Jessica. She’s kindly hooked me up with all of the specs and even the company’s full product catalog.

As it turns out, my little Changli CLZKC-009 truck here is something of a hot rod. It can be maxed out with a 3,000W motor (a whole four horsepower!) that provides rear wheel drive reaching a top speed of 45 km/h (28 mph).

The little 12″ wheels include hydraulic disc brakes, not that you’ll need to stop from a terribly high speed.

You even get a pile of fancy features that come standard, including electric windows, front wiper, electric heater, a backup camera, a roof/cargo rack in the bed and roof-mounted off-road lights.

There are also options for upgrades such as air conditioning and even a gas-powered range extender to turn it into a hybrid truck.

There are a number of colors to choose from, or you could go with their in-house graphics package.

They’ve got a Jeep-badged model that also comes complete with “Explorer” blasted across the grille (click play to see it in action below).

I admire the hustle of going after both Ford and Jeep at the same time, but c’mon guys. Let’s just choose a copyright infringement lawsuit and stick with it.

And as much as I love the off-road lights and the cargo rack package, to be honest they kind of make it look like it’s one turret short of a Taliban truck. Our graphic designer (of “Mad Micah” and “Tolltanic” fame) wanted to go with “Tolliban” but fortunately I nipped that idea in the bud.

For the most part, I’m gushing over the cool accessories, but I’m not going to claim that everything about the truck is perfect.

For example, the climate control system connected to the pop-up sunroof appears to consist of two computer fans mounted to the side of a laundry basket.

But I think you’re focusing on the wrong part of that sentence – this truck has a pop-up sunroof!

And I’ve saved the best feature for last.

Not only is this a $2,000 electric pickup truck with more range than a used Nissan Leaf. Not only does it offer the latest in cheap backup camera technology. Not only does it already exist and can ship to your driveway (or more likely closest port) today. But it even has a working hydraulic dump truck feature (that costs an extra $228). Not even the F-150 Lightning or Tesla Cybertruck can claim that!

Don’t believe me? Jump to 0:29 in the video below to see this marvel of engineering in action!

Alright, so by now I’m sure I’ve sold you on this awesome electric truck.

You probably want one as bad as I do. Or at least you think you do.

We’re about to see how bad you really want one. Because even though the purchase price is a hair under $2,000, that’s only the beginning.

Technically you’ve also got to pay for a battery upgrade if you want lithium-ion batteries, which of course you should want. Plus the fancier options like air conditioning or that range-extending gas engine cost extra.

From there you’ve got to pay for shipping. Jessica quoted me a sea shipping price of $2,210 for a single unit shipped as LCL cargo (less than container load cargo) to my local port of Miami, where I’d have to pick it up. On top of that, I’ll have customs broker fees likely in the several hundred-dollar range, and then there could very well be 25% Trump tariffs on top. (This is where those tariffs are supposed to encourage me to buy an American-made mini EV, but something tells me I’ll grow old before I can find a US company producing mini EVs.)

All told, I could be looking at closer to $5K to get this truck into my garage in the US. From there, I’m not entirely sure it would even be street legal in its present form. In Florida I think I could register it as a low-speed vehicle as long as it comes with a manufacturer’s certificate of origin, meaning the 25 mph vehicle could travel on any road posted up to 35 mph, or cross faster roads (Frogger, anyone?). But NEV and LSV laws and regulations vary from state to state, so you’d want to check your local legislation. Theoretically it should have everything it needs to meet federal NEV regulations, but some states have stricter laws.

There could be another option though. These electric mini EVs are all over the place in China, but so far haven’t caught on quickly in the US… but they may be starting to. There are now two different importers of mini EVs and mini electric trucks, Pickman in California and Electric Import Motors in Utah. The latter apparently imports this very truck as well as the Changli car version, which they’ve spec’d for US customers. That would be a much easier way to get your own mini EV stateside – even if you have to pay the markup.

I’ve still got some numbers to crunch (and a wife to convince) before I can make one of these little electric trucks mine. If it works out in the end though, you better believe you’ll be hearing about it.

And until then, might I interest you in some of my other fun Awesomely Weird Alibaba Electric Vehicle of the Week finds? What about an electric RV with three wheels, or a one-wheeled electric motorcycle? C’mon, you know you’re curious!