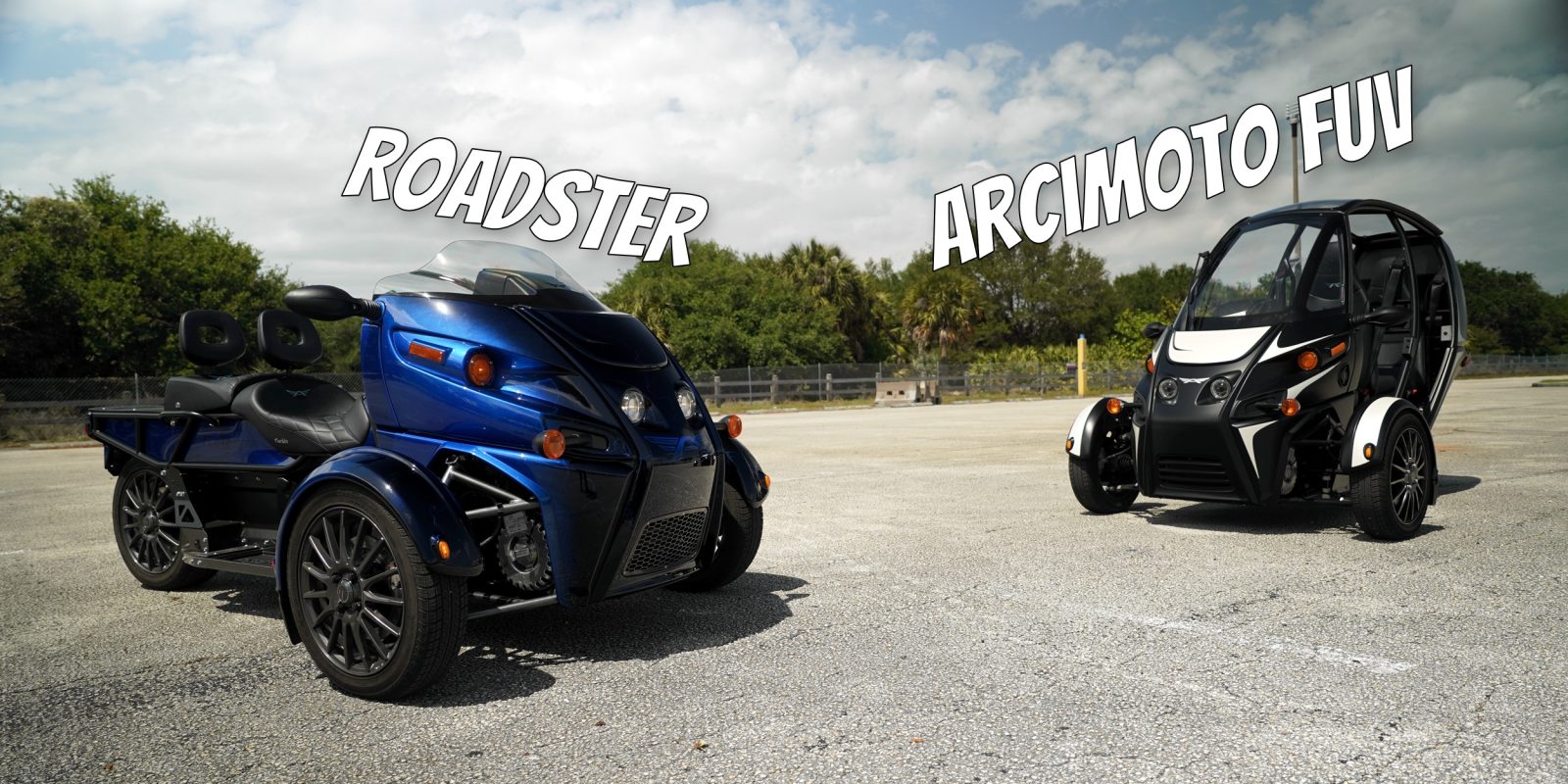 The market is seemingly flooded with impressive new electric offerings in both the four-wheel and two-wheel varieties. But what about three-wheeled electric vehicles? I recently took a test ride on the Arcimoto FUV and its chopped-top rebel cousin, the Arcimoto Roadster, to see what this wild and wacky EV could do.

Big thanks to Arcimoto as well as Glenn Cook from Orlando’s EVTransports for hooking me up with the test ride (and Glenn specifically for trusting me enough to ride back seat with me!).

I met up with Glenn on Florida’s east coast for some warm and sunny afternoon riding. I was expecting to take a rip on the three-wheeled Arcimoto FUV that morning, so imagine my surprise when I rolled up on my e-bike to see not just an FUV but also an Arcimoto Roadster.

The FUVs are rare enough thanks to the currently low-volume production, but this was only the fourth Arcimoto Roadster ever made – essentially one of a kind for these largely still hand-built vehicles.

I spent a good chunk of my fun afternoon cruising the coast and switching between the two vehicles. You can see my test rides of both in my video below. Then keep reading for the full experience!

What the heck are these things?

Okay, so let’s get some details out of the way first. The Arcimoto FUV looks like something you’d call a three-wheeled electric car. That’s almost correct – it’s just not actually a car. Technically it’s a motorcycle, or a trike to be more accurate.

It conforms to motorcycle regulations yet doesn’t require a motorcycle helmet in most areas due to the enclosed frame.

The Roadster, on the other hand, still requires a motorcycle helmet in states with helmet laws. Florida, in true Florida fashion, is not one of those states.

I still opted to wear the half helmet they offered me, though it looked more like the helmet was wearing me for much of the ride. It was a far cry from my typical carbon fiber modular helmet I wear on my motorcycles, but then again if you’re going wheels up this thing then something has gone horribly wrong. It feels like its got better rollover than a Formula E car thanks to the low batteries. But I’m getting ahead of myself.

Let’s start with the controls.

If you were expecting a steering wheel, think again. In the cockpit I was met with what looked like typical motorcycle bars complete with twist throttle.

Fortunately I’m more comfortable with a bar in my hands than a wheel. Unfortunately that’s about where the motorcycle parts end.

It’s an interesting mashup of a car-style seat in the FUV (complete with not one but two seat belts!) and motorcycle bars. There’s a regenerative braking lever on the right bar, but it is more of a trigger lever than a true motorcycle brake lever. A physical brake pedal on the floor controls the hydraulic braking, though I soon learned that it’s almost unnecessary since the regenerative braking is ridiculously strong by itself.

You’ve also got a small screen to give you all the important riding (driving?) data you’ll need. Speed, battery, range, etc., it’s all there.

The only thing I’d love to see added is built-in GPS navigation. Without it, I just strapped my phone onto the bars for that. Again, it feels like a mashup between a motorcycle and a car in that way.

How does the Arcimoto FUV ride?

Once you get rolling, oh boy do you get rolling! I was testing out an Evergreen FUV model, the top of the line loadout that offers a 75 mph (121 km/h) top speed from a pair of motors putting out a combined 77 horsepower (57 kW).

The Roadster is a similar setup, but Glenn explained that it was currently tuned for more immediate power – which you could definitely feel with a swift twist of the wrist.

The FUV sports a 20kWh battery that nets a range of around 100 city miles (160 km) per charge. Once you get going fast, the range drops quickly. You’ll get about two-thirds of that range at 55 mph (88 km/h), and more like a third of that range at 70 mph (120 km/h). With no doors and a tall body, this isn’t the most aero-efficient vehicle on the road.

But it may just be the most fun! Seriously, both of these are a blast to drive.

Cruising through the city and out to the A1A highway along the coast, heads were turning as fast as I could fly by. I switched back and forth between the two vehicles a few times and I’m still not sure which I prefer.

The FUV has more of an automotive or even high-power go-kart feel to it. The seat (and seat belts) along with the roll cage and canopy give you a safer, more enveloped feel, even while the performance and handling reminds you that you’re in anything but a typical car.

The Roadster, on the other hand, is like riding on the back of a dragon.

It’s oddly wide – at least for someone coming from a typical electric motorcycle – and thus oddly stable feeling as well. But you’re also fully exposed and buffeted by the wind, unlike in the FUV that still gives you pretty good wind protection even without doors. It’s a fun feeling on the Roadster, but it’s a totally different sensation than being inside the FUV.

Both require more upper body strength to steer than you might expect, but anyone familiar with trikes is probably used to that. It’s not that you have to be overly muscular – it’s just not as easy as steering your family car.

And as I mentioned before, both have more than enough regenerative braking power to almost not need the brake pedal. As Glenn told me, he basically only steps on the pedal when he need to hold the vehicle in place. Otherwise the regenerative braking is sufficient for most normal stops while driving.

As much fun as I had driving the FUV, I’m not sure I’m ready to write a check for $17,900 – the current purchase price. I had an amazing time, but it’s hard for me to justify the FUV if I don’t have 18-grand just laying around.

Don’t get me wrong – I’m not saying the FUV isn’t worth it. That price is pretty high, but you’re also talking about low-volume production for highly specialized vehicles.

And I could wax poetic about the “premium” features like the heated seats, Bluetooth speakers, locking storage trunk, optional doors, etc. But the fact of the matter is that until Arcimoto can drop the price the price closer to its target of $12K after hitting the higher production levels it is planning, this is very much still a pay-to-play type of vehicle.

Nearly every time I write about Arcimoto, I get the same few tired comments to the tune of “Who would spend thousands of dollars on something that is too wide to be a good motorcycle but too small to be a good car?” And while I understand the sentiment, I think those people are missing the point. This likely won’t be very many people’s only form of transportation (though I still believe it could be). Instead, this is a fun second vehicle that you use when you don’t need to pick up three kids from soccer practice your sedan.

I don’t think many people are going to be looking at this as the most utilitarian vehicle purchase they can make. I’m not suggesting that you can’t use this as the most awesome grocery-getter out there or to be the coolest parent in the school carpool line (if you have multiple kids then I guess pick your favorite?). But even though it can be used for normal transportation tasks, it’s obviously more of a “fun” vehicle purchase at the currently high price.

That being said, “fun” is a perfectly legitimate reason to buy a vehicle. If I had the cash, there’d be a Harley-Davidson LiveWire, a Zero SR/S, and an Arcimoto FUV in my garage right now, simply because they are just such fun vehicles to ride.

There’s a reason they put the word “fun” in the vehicle’s name, and the reason isn’t only marketing.