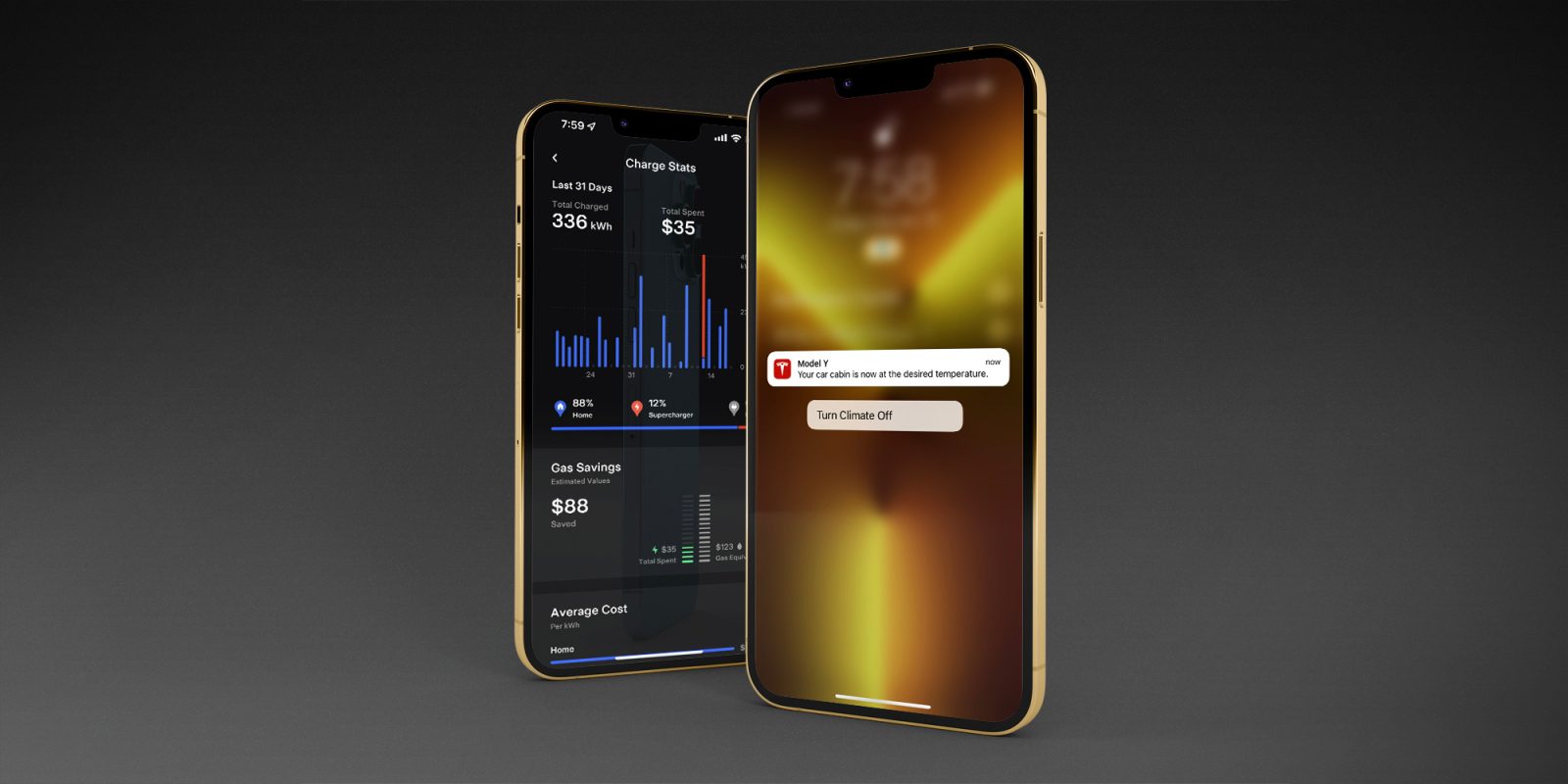 Tesla has updated its smartphone app to version 4.6 adding some useful new features including actionable notifications and charging stats, and data-miners have found plans for an upcoming cheaper annual subscription to their Full Self-Driving and Premium Connectivity services.

But even with this upcoming cheaper subscription scheme, Tesla has so far shown no interest in ending its practice of charging owners $1k for hardware they already paid for.

Tesla recently added a new “Charge Stats” feature to the app, which allows owners to see how much they’re spending to fuel their car, and figure out how much they’ve saved compared to buying gasoline.

This new app update will also allow Tesla Insurance policyholders to submit claims from within the Tesla app.

(We encountered a few bugs when testing this feature for this article; we’re sure they’ll get worked out soon enough)

Speaking of climate, Tesla also added some code to the app to allow remote activation of the formerly in-car-only “Climate Keeper” function. This allows long-term use of the car’s climate control systems, for example if you’re car camping and want to keep the car warm overnight. Remote activation isn’t active yet, but it looks like it should show up soon.

This feature was noticed by data miners and isn’t yet active in the app itself.

Currently Tesla charges $10 a month for “Premium Connectivity,” access to various in-car features like traffic visualization, satellite-view maps, and various other internet features. Without this subscription cars get navigation, but miss out on some other in-car features. Tesla also offers a monthly subscription to its “Full Self-Driving” software at a price of $199 a month.

As of yet, though, Tesla continues its policy of charging owners whose cars do not have the FSD Computer installed – cars built between late 2016 and mid 2019 – for hardware that they were told they already have.

When these cars were built, customers were promised that they had all the hardware for self-driving – a promise that’s still up on Tesla’s website to this day. But when Tesla started offering monthly subscriptions, the company told these owners that they need to pay an upgrade fee for new hardware, despite Tesla selling those cars with the promise that they wouldn’t need any additional hardware for self-driving.

We covered this controversy when annual subscriptions first came out, and Tesla responded – but not really. Originally the company was charging $1,500 for the upgrade, and it lowered the price to $1,000 after our story. However, the only acceptable price in this circumstance remains zero, given Tesla’s years of assurances that the hardware was already in the car at purchase time.

We suggested at the time that if Tesla – the largest automaker in the world by market cap which boasts an incredibly high automotive gross margin – really needed to pinch pennies on giving owners equipment they already bought, they could have required a minimum subscription time for the upgrade. This would stop people from trying out FSD for a month and canceling their plans, resulting in a mostly-unnecessary upgrade process for Tesla (which they promised wasn’t needed anyway).

So there’s an opportunity here. Now that Tesla is planning to offer annual subscriptions, perhaps they could waive the $1,000 upgrade charge for owners who buy into an annual subscription, which would at least partially fulfill the promise that it made to those customers over the course of three years.