Tesla is charging owners $1,500 for hardware they already paid for 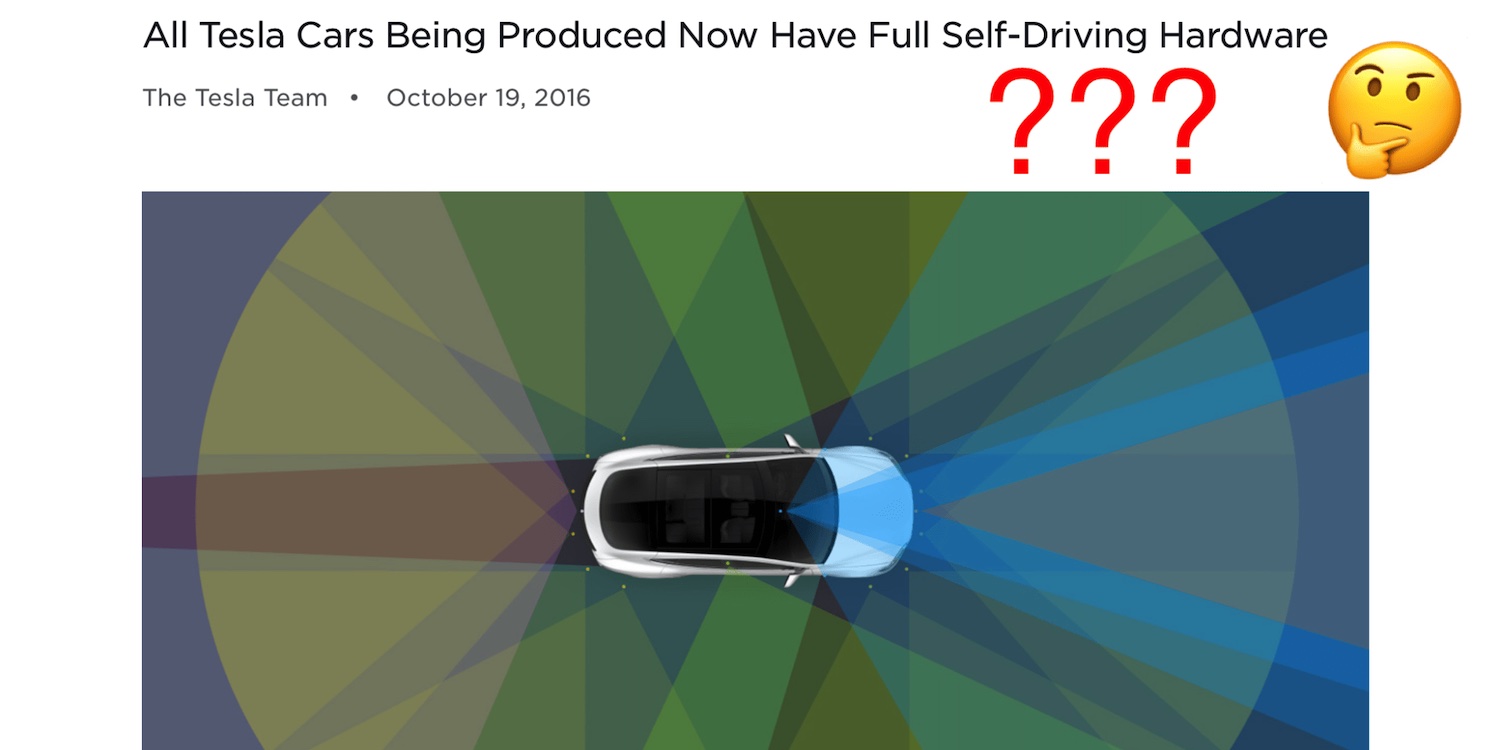 This weekend, Tesla started offering their long-awaited Full Self-Driving subscription package for $199/month. Along with the package, Tesla is offering a $1,500 hardware upgrade for early owners who have old hardware that is not capable of full self-driving tasks.

The problem is, Tesla previously told those same owners that their cars were capable of full self-driving tasks and isn’t allowing those owners to take advantage of the new subscription scheme without paying again for a hardware upgrade that they already paid for.

Update: Tesla has reduced the price of the upgrade to $1,000. Which is still $1,000 more than the appropriate price for something that customers already paid for.

All Teslas currently come with “Basic Autopilot,” a slate of driver-assist and safety features. These include automatic lane keeping, traffic-aware cruise control, and other standard safety features like emergency brake assist. These can help reduce the stress, particularly of highway driving, and enhance the safety of the vehicle.

The “Full Self-Driving” package takes this further and adds other driver-assist features that allow the car to make more decisions on its own. These include:

Eventually, this package will offer full autonomy, but the software is not there yet and still requires driver attention at all times.

Tesla’s Full Self-Driving package can be bought for $10,000 upfront or $199/month with the new subscription scheme. It has cost less in the past, but as Tesla has rolled out more and more capabilities through software updates, the price has continually increased.

Since 2016, Tesla has said that all Tesla cars have Full-Self Driving hardware built in, but the software is what costs the extra money. At press time, Tesla’s blog, where they announced this, is still up on their website. In case it goes down, we’ve screenshotted the contents of the blog for posterity:

Owners who bought Tesla vehicles between late 2016 and mid-2019 were sold a bill of goods that was capable of full self-driving with the hardware included in the vehicle. They were told that no further hardware upgrades would be required.

Since that post, Tesla found that their previous computers, designated Hardware 2.0 and 2.5, weren’t quite up to the task of full self-driving. So they designed their own chip, alternately described as “Hardware 3.0” or “FSD Computer,” which was more capable. Cars built since mid-2019 have this new hardware included.

As part of this change in hardware, Tesla said that all owners with the old hardware could upgrade to the new hardware for free, provided they had paid for Full Self-Driving. Tesla has a blog describing the process for upgrading your computer to FSD Computer/Hardware 3.0.

This was all fine and dandy – owners who would make use of the FSD Computer got a hardware upgrade along with their purchase of the software, and owners without Full Self-Driving weren’t missing out on anything since they didn’t have the software anyway.

But now, the much-awaited subscription scheme offers a lower barrier to entry. Tesla owners with cars from late 2016-mid 2019 might want to try out the software and see what it can do, especially since it has improved since they purchased their car. Maybe they don’t know if they’ll like it enough to want to spend $10,000, or maybe they don’t think they’ll have the car long enough for it to be worthwhile — any number of reasons.

But to get that subscription, Tesla is demanding that those owners pay $1,500 upfront for the hardware upgrade that was previously given to all Full Self-Driving purchasers for free. Remember, this is an upgrade that all Tesla owners since late 2016 already paid for by purchasing a vehicle that Tesla said included Full Self-Driving hardware. Here’s the notice showing up in the Tesla app for older car owners who want to use the new subscription:

As this information has percolated through Tesla forums and by word-of-mouth, many owners are showing their anger with Tesla over the changes. We’ve received several tips and messages and read lots of furious comments over this change, with some comments even calling for legal action.

This isn’t the first time Tesla has broken a promise to early customers.

Tesla told early customers that prices would gradually rise for Full Self-Driving capability and to lock in their price now before it goes up. Then, before any Full Self-Driving features actually rolled out, Tesla pulled a bait-and-switch and lowered the price, despite the software never having been delivered yet at that time. Some might say that this is analogous to buying a product that later dropped in price, but the difference is that the early purchasers here gained no benefit from owning the software early since the software didn’t do anything yet at the time.

Tesla also recently broke a promise with Tesla Solar Roof customers, hiking prices on already-signed contracts after stringing along those early customers for a year or more about Solar Roof availability.

This sort of thing seems to happen a lot with Tesla. In fact, even before the aforementioned events, many early Model 3 owners purchased their vehicles with Full Self-Driving, even though the software didn’t do anything yet, because they thought doing so would obligate Tesla to upgrade their computers for free if they later found out the hardware was not capable enough. So this sort of behavior is common enough from Tesla that many owners anticipated this happening years in advance.

But despite this, the company has loyal customers because they make a good product and because they truly are pushing the industry forward. Tesla has been a major cause of the shift towards electric vehicles, which is necessary if we are to avoid the worst effects of the climate emergency we are all currently facing. They’re innovating a lot, and the rest of the industry is finally starting to race to catch up.

The same fast-and-loose pace of innovation leads to a lot of basic errors like this. Someone within the company should have remembered that this promise was made and should have noted that it would be unethical and unwise to charge your loyal, early customers $1,500 for a product they already purchased. But that employee probably quit working at Tesla a while ago because the company overworks everyone, which leads to high turnover and little institutional memory, even for things that are still up on the website.

Tesla has gotten a certain amount of slack from owners and media. The company is a “startup” in a difficult industry and is trying to change that industry significantly and do a reasonable job of it.

However, Tesla was founded in 2003, 18 years ago. It’s an enormous company with over 70,000 employees, making ~$10 billion in revenue every quarter, and it’s even part of the S&P 500. It’s not a “startup” anymore. It doesn’t get to use that excuse when it does stupid stuff like this. It needs to grow up and stop lying to its customers. And we’re getting tired of having to say this.

There is a simple solution here: remove the $1,500 charge for hardware that owners already paid for. We hope this change happens swiftly.