An electric bicycle built for two? This Valentine’s Day, check out the best two-person e-bikes 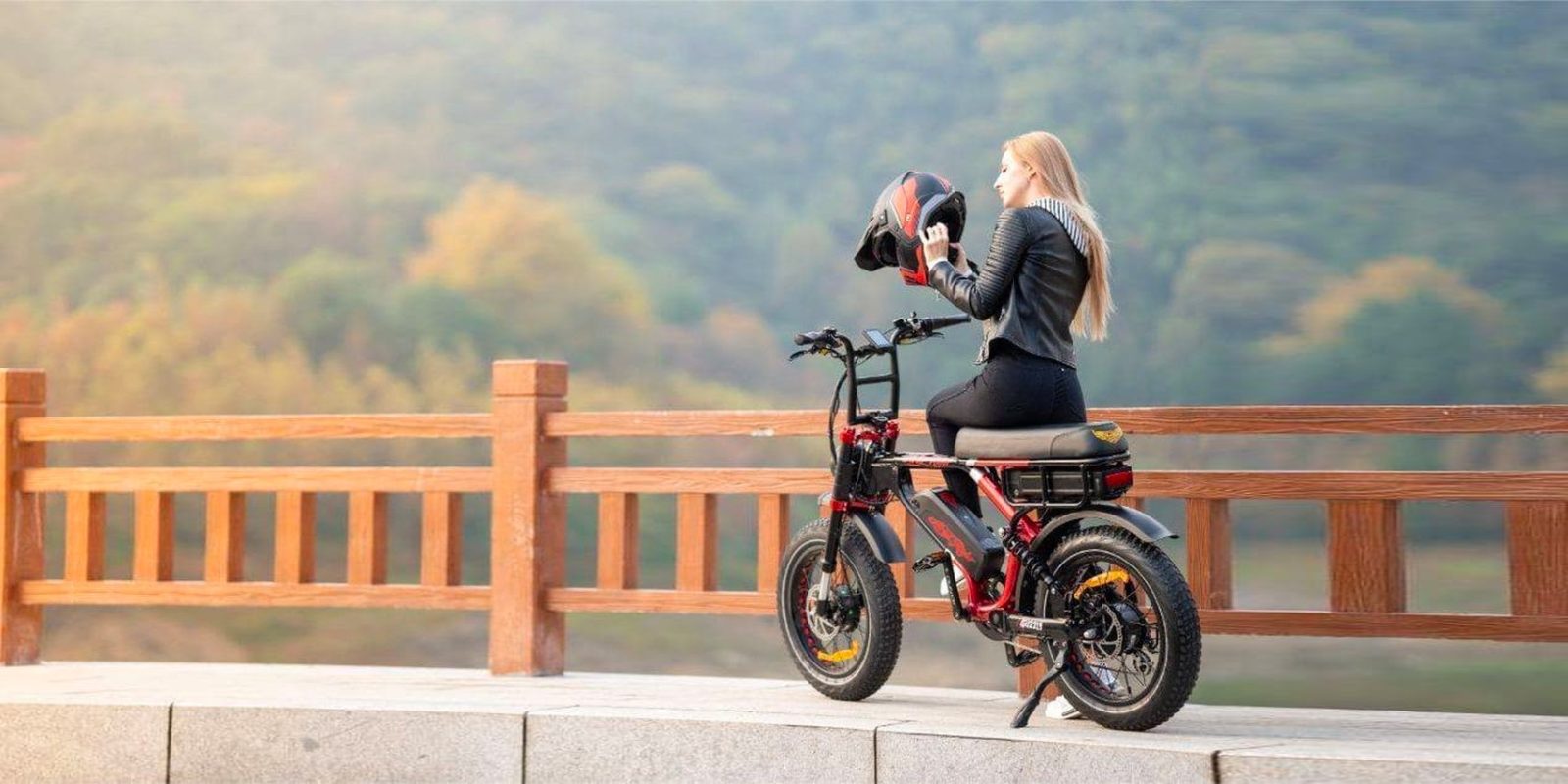 Electric bicycles come with added electric motors to make riding quicker, easier, and more fun. Throttle e-bikes don’t even require pedaling at all, turning them into little electric mopeds. And that easy operation also opens the door to serious utility possibilities, such as effortlessly carrying a second rider on the back.

There are plenty of dual-passenger e-bikes out there to choose from, and this Valentine’s Day might be the perfect time to take a look.

Several electric bicycle companies have come out with e-bike models that are either designed for two riders or can have a second passenger seat added as a factory-made accessory.

Here are some of the ones we’ve tested out.

Rad Power Bikes is the largest electric bicycle company in North America… by a long shot. And so they know a thing or two about e-bikes, including e-bikes built for two.

There are three models of e-bikes from Rad that are perfect for carrying passengers.

The RadRunner and RadRunner Plus models share the same moped-style frame and long rear rack built directly into the structure of the bike. That means they can support a lot of weight, as in your loved one riding on back (or a couple kids).

The RadRunner starts at $1,499, but you’ll want to add the $99 Passenger Package accessory that lets you bolt on a comfy bench seat, foot pegs, and a clear wheel skirt that keeps any dangling feet out of the rear wheel.

The RadRunner Plus is priced at $1,899, but comes with the Passenger Package pre-installed. It also has a suspension fork, 7-speed drivetrain, and LCD display. When I reviewed the RadRunner Plus, I called it one of the most utility-focused e-bikes I’d ever tried.

Both can reach speeds of 20 mph (32 km/h) and have ranges of up to 45 miles (72 km), though you’ll definitely get reduced range with a passenger on back.

If you want to go even bigger, check out the RadWagon from Rad Power Bikes. It’s a $1,999 longtail cargo e-bike that has a super-extended rear rack. You’ll want to add the Deck Pads to make a cushier seat on back. It’s a great way to carry a passenger since there’s tons of room to stretch out back there.

Rad Power Bikes is also known for its great service and its nearly nationwide Rad Mobile support, which can send a bike shop in a van to your driveway if you ever need help with bike maintenance or if you ever require a repair.

California-based Juiced Bikes specializes in higher power electric bikes, which is exactly what you want when you’re carrying a passenger – Juiced has three bikes that would be perfect for carrying a friend or loved one on the back.

The most powerful (and most fun) option is the HyperScrambler 2. It offers a long bench seat, plus a super powerful 1,000W motor that sends the bike up to 30 mph (51 km/h) speeds.

The $2,999 price tag is a bit steep for many new riders, but it also comes with two batteries offering up to 100 miles (160 km) of range in pedal assist mode. And with motorcycle-level parts like tires and hydraulic brakes, the HyperScrambler 2 is really bordering on moped or motorcycle-class quality.

For a bit of a lower price without sacrificing too much performance, check out the $2,199 Juiced Scorpion X. You can add the passenger kit for $135, and you’ll have a 28 mph (45 km/h) electric bike that offers many of the same high quality parts found on the HyperScrambler 2.

[Update: It looks like Juiced is including the passenger kit for free on Valentine’s Day. Sweet!]

If you like the Scorpion’s step-through frame but want to go all “Hyper” with the highest performance, the HyperScorpion is for you. It’s currently on sale for $2,599, making it a nice compromise between the two.

Last but not least, the base-level Scrambler costs just $1,799 but still offers great performance specs, and that long bench seat that makes it perfect for carrying a passenger!

Ariel Rider is another high power electric bicycle company, and they’re known for a great balance between reasonable prices and impressive specs.

The Ariel Rider Grizzly is the craziest of all of Ariel’s models, and it will get you well above 30 mph (51 km/h) even with a passenger on back. By yourself, speeds of up to 35 mph (56 km/h) are doable.

The 3,700 watt e-bike also features dual motors, dual suspension and dual batteries for the highest power and longest range. It’s kind of amazing just how much power and capacity they fit into that thing.

The Grizzly is a $3,299 e-bike though, so you may want to look at some of the company’s other models if you’re trying to save some cash.

The 52V X-Class is priced at $2,399 and will still get you up to nearly as fast as the Grizzly, though it only has one battery and one motor. You know, like most e-bikes.

It also has full-suspension and looks the part of a true electric moped. It’s definitely a crowd pleaser, and I loved it when I reviewed it last year.

You might have noticed a theme here – dual passenger e-bikes aren’t cheap. Tern won’t turn that trend around, but at least you’d be getting an amazing quality e-bike for your money.

The HSD is the more affordable of the two and starts at just over $3,000. The GSD will send you closer to the $5,000 territory depending on where you buy it and with what features.

Both bikes come with mid-drive motors, hydraulic disc brakes, and high-end shifters. Some versions even have automatic transmissions – talk about fancy!

The GSD and HSD are serious e-bikes designed for someone who plans to ride everyday, rain or shine, and replace thousands of miles a year that they used to do with a car. While Tern’s models are more e-bike than many people need, they are some of the best dual-passenger utility e-bikes out there.

I even had the chance to personally experience how much fun they are from the back seat when Tern’s bossman himself, Team Captain Josh Hon, took me for a spin on one at Interbike (RIP Interbike).

This one technically isn’t an electric bicycle – it’s an electric scooter. There are no pedals on the SWFT Maxx, but it still makes for an awesome ride with two riders. My wife and I had a blast testing this one out together, and she spent just as much time in the “driver’s” seat as I did.

It is fairly small and lightweight, meaning it handles nicely and doesn’t feel like a big heavy gas scooter – the only downside is that it only goes 20 mph (32 km/h). While that’s the same speed as all of the Rad bikes at the top of this article, it feels slower when you’re on a motorcycle-like scooter.

But with a price of $1,999, it’s less expensive than many e-bikes while offering motorcycle-style hydraulic disc brakes, full-suspension, complete light package, storage areas, and a big, comfy seat.

Are there any other awesome dual-rider e-bikes out there that I missed? Be sure to let me know in the comments section below.

Oh, and don’t forget to trade off on who gets the front seat from time to time!

[Update: It turns out that several e-bike companies are offering sales for Valentine’s Day, even if they aren’t two seaters. Lectric eBikes is offering two free comfort packages if you by two Lectric XP 2.0 e-bikes (and they’re an amazing $999 deal already). Zugo is offering $200 off their e-bikes when you use the code BUY2SAVE$200 at checkout. And we’ll update with more sales as we find them.]