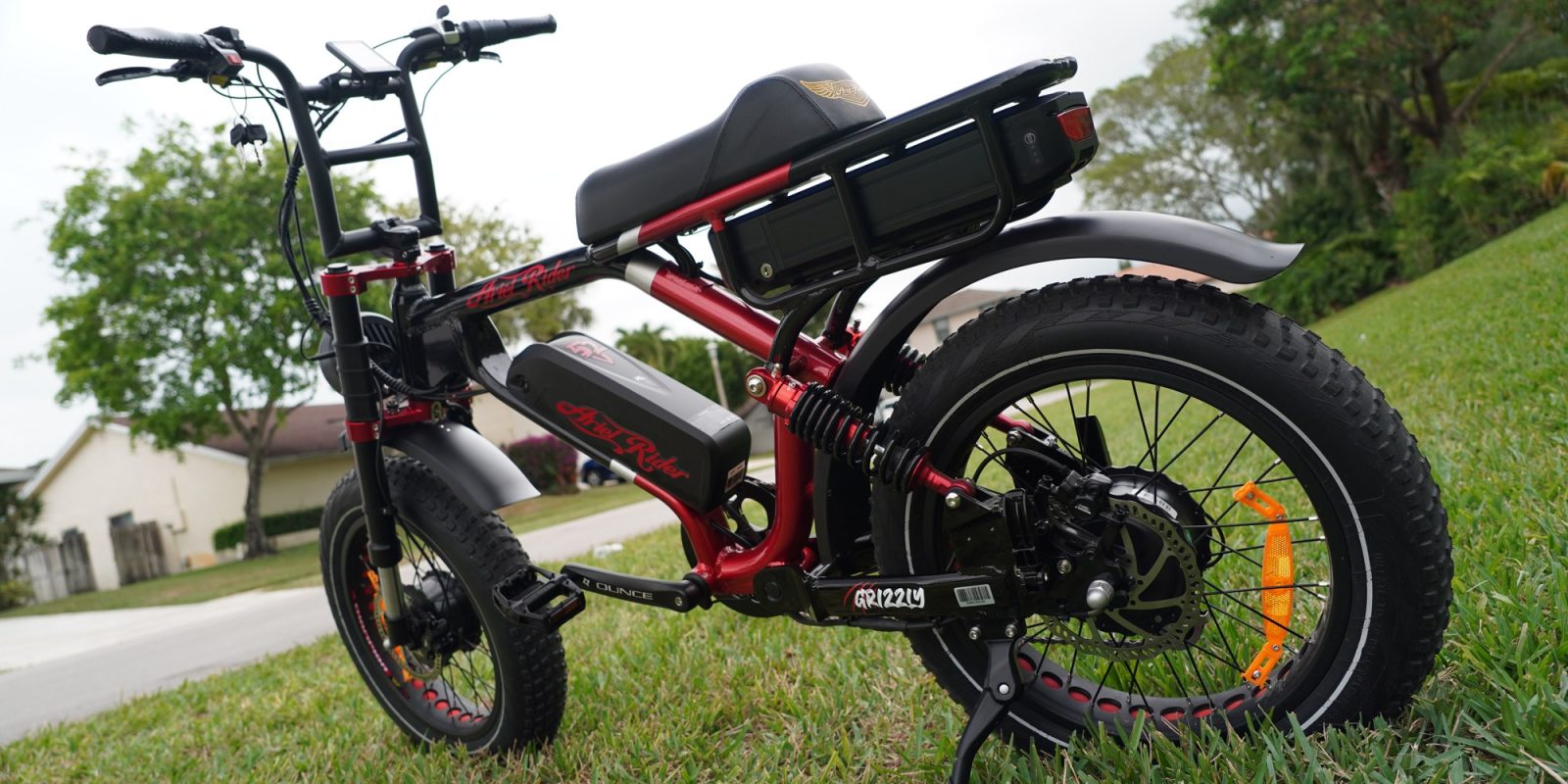 Ariel Rider has proven time and again that it knows exactly how to build fast, powerful electric mopeds that push e-bike performance to entirely new levels. And the Grizzly 52V dual motor e-bike is yet another great example of the brand’s dedication to high-performance bikes that combine light electric motorcycle specs with e-bike parts for a line-blurring ride.

If you recall the high-performance Ariel Rider X -Class 52V e-bike that we reviewed earlier this year, then much of the Grizzly will seem familiar.

It retains the high speeds and dual-suspension setup, but improves upon those parts while also adding a second motor, second battery, and a more relaxed ride position.

The result is basically a small electric motorcycle. Yet because the Grizzly uses bicycle parts (including functional pedals) and can be limited to street-legal power and speed levels (and in fact ships locked in 20 mph mode), it qualifies as an electric bicycle for on-road use without a motorcycle license.

Of course that means you can’t unlock the true potential until you’re off-road, but it’s worth the wait.

Check out my video review of the Ariel Rider Grizzly below, then keep scrolling for my complete review of this powerhouse e-bike.

All the power, some of the time

The Ariel Rider Grizzly is a powerful e-bike, make no mistake. The dual 1,000W motors are rated for a peak output of 1,850W each for a total of 3,700W combined.

The motors are not quiet, mind you. They use steel gears internally instead of the typical nylon gears. That helps them provide that power over many years without tearing themselves apart, but it also means you get a constant whirring sound from the motors. It doesn’t bother me, though, as it fits the ride. This bike is visually loud, so it might as well announce its presence as well.

Or if you just don’t want to do dual-wheel burnouts after each stop sign.

To hit the top speed of the mid 30’s of mph, you’ll need to unlock the bike from its factory settings. That also means it will no longer be street legal in areas that limit e-bikes to Class 1, 2, or 3 performance (i.e. most places). So keep that in mind if you want to go through the unlocking procedure.

Even if you don’t unlock it to the “off-road only modes” and instead you stick to 20 mph (32 km/h) on throttle or 28 mph (45 km/h) on pedal assist, the extreme power of dual motors still has the added benefit of impressive hill climbing and quick acceleration.

To supply those two hungry motors, you also get two giant batteries. Between the pair of them are 1,820 Wh of capacity. That’s enough for up to 75 miles (120 km) of range, which in technical terms is “more than enough.” If you’re riding off-road, or just going fast on the pavement, you won’t get nearly that much range. But just shy of 2 kWh on an e-bike is plenty for nearly everyone. And if you’re wondering where the $3,099 price comes from, the dual batteries and dual motors bear much of the responsibility.

The bike also comes with two chargers so you can charge both batteries at the same time. I’ve seen dual battery e-bikes come with a single charger, which can be annoying to switch back and forth between batteries. Dual-chargers cost the company a bit more, but it’s the way to go for anyone who uses their e-bike often and wants to be back on the road quickly.

What about the “bike” side of things

Technically this is an electric bicycle and so technically it has bike parts. The dual-piston hydraulic disc brakes, seven-speed Shimano shifter, and KMC chain are all typical bike parts, though I can tell you that you’re unlikely to get much real-world use out of the last two. The bike pedals just fine, but it’s so much fun on throttle-only operation that many people are just going to treat it like a motorcycle with eccentric footrests.

Speaking of footrests, it even has pegs for a passenger. If you want to carry a friend with you, which the powerful motors absolutely make possible, you’ll want to upgrade to the two-person seat. Without it, there’s room left on the rear rack for a cargo box or rack.

The only other bike-like parts left are likely the 4″ CST tires, which work great both on and off-road. After those, we’re back to quasi-motorcycle parts. The front fork is an inverted hydraulic specimen designed to fit those giant tires. The rear suspension consists of a pair of coilover shocks that are definitely more moped than bike. And both the front and rear suspension are adjustable to dial them in for your weight and ride style.

Speaking of weight, this isn’t a lightweight e-bike. At 105 lb (47 kg), it’s one of the heaviest I’ve ever ridden. It weighs right up there with other moped-style e-bikes like the Juiced HyperScorpion.

Don’t expect to load this into a truck by yourself without throwing out your back – it’s a team carry situation.

But even though the weight limits its portability, it has the opposite effect on the road. The bike feels solid and planted, more like a vehicle than a bicycle. I ride a scooter-style moped as my daily driver and it gives me more of that feeling, like I’m on a motor vehicle and not a commuter e-bike.

That’s really where the value in the Grizzly rests: as a solid, powerful e-bike that serves a nearly motorcycle role on the street and a dirtbike role on the trail.

As an urban transport vehicle, the bike is powerful enough to climb hills, haul gear, keep up with traffic, and ride all day without fear of running out of battery.

As a trail warrior, it fills the role of a fat tire adventure bike with the suspension and handling to turn an abandoned lot or empty rock quarry into the best playground ever.

What I wouldn’t recommend doing is making enemies in the bike lane with a monster like the Grizzly here. Yes, it’s legally an electric bicycle (in the US). And yes, you can definitely ride it in the bike lane (I did). But that also requires some serious self-control.

When you’re around other cyclists, you have to tame yourself and ride with the speed of traffic. When you’re out with the real traffic and mixing it up with cars, that’s when the full power and speed of the bike can really come alive, assuming you’re into that.

Just like with masked superheroes, with great power comes great responsibility. Just because a minivan can do 90 mph with the pedal to the floor doesn’t mean it should be driven that way all the time. And just like a powerful e-bike can exceed the speed limit with the throttle pinned doesn’t mean it always should. Riding safely and respecting everyone around you (and your local laws) is always the way to go.

Now if you’ll excuse me, I have some more riding to do!