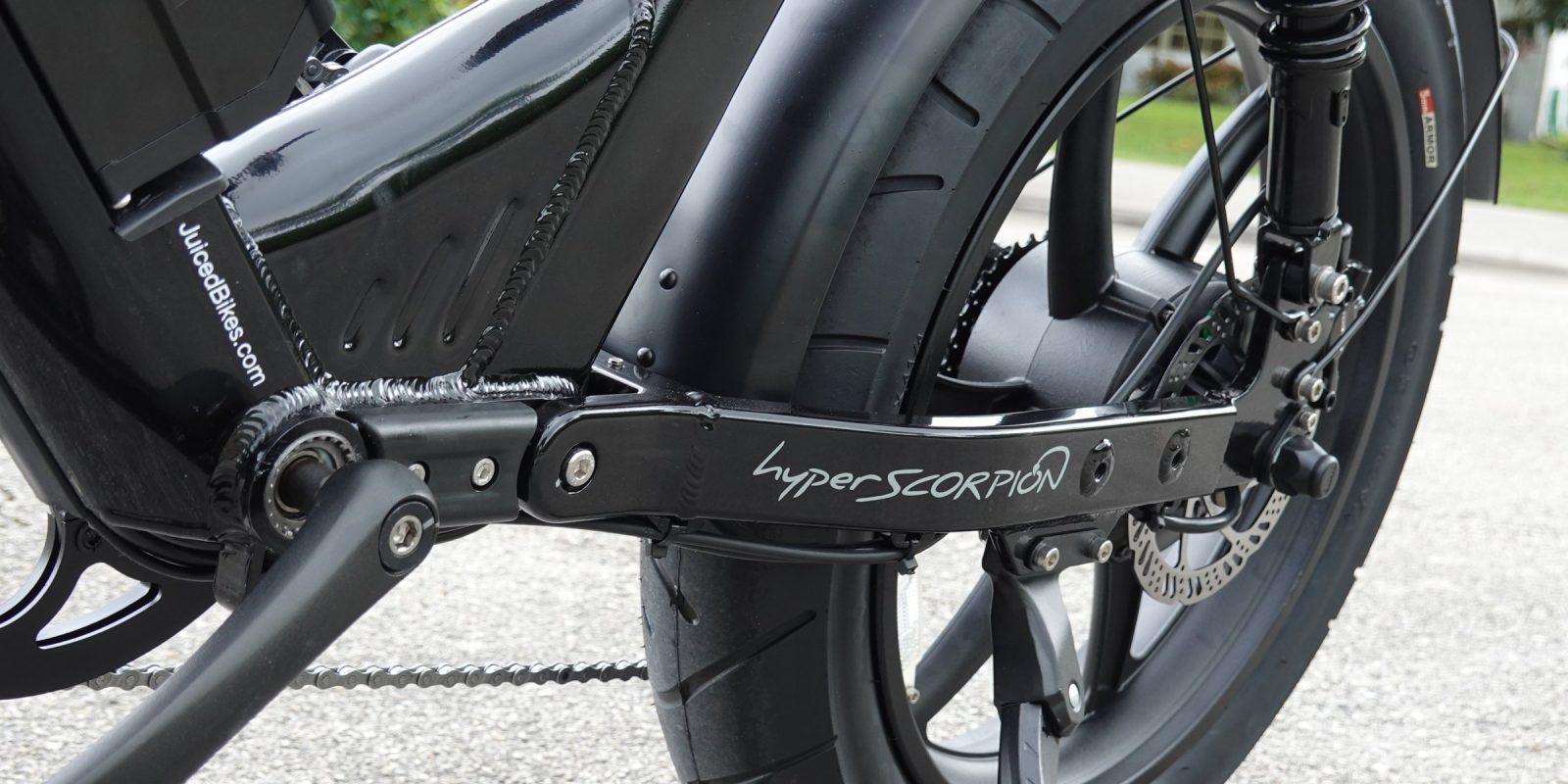 The Juiced HyperScorpion is an electric bicycle… errr, electric moped, that completely embraces the growing trend of high powered electric bikes that blur the line with electric motorbikes.

Yes, it’s still an electric bicycle. It’s got two wheels, pedals, a chain, and can be pedaled all day to your heart’s content.

But it also offers a whole other level of fun and utility as an electric moped that actually deserves its place on the road with every other vehicle.

And therein lies the interesting duality of the Juiced HyperScorpion. It’s an electric bicycle and an electric motorbike all in one.

And that, my friends, is what makes it such a potent little EV for everyone from thrill riders to daily commuters.

What really sets the Juiced HyperScorpion apart is just how extra the bike is.

Everything is just so much more than you’d get on any typical e-bike. The battery is gigantic at 1kWh and offers more range than most people need (up to 70 miles or 112 km under “ideal” conditions). The motor is incredibly powerful, with a 1,000W continuous rating and likely north of 1,500 peak watts. You get over 30 mph (48 km/h) of speed. You get turn signals and mirrors and those super grippy street tires.

Everything about the HyperScorpion just puts it in a different class, a moped class. There’s even a lighted license plate holder, meaning you could presumably go down the route of trying to register it as a moped (which opens up a quagmire of varying state laws and regulations, so we’ll let you tackle that on your own. If you are curious, there is no VIN number but there is a frame number).

But the fact that you can limit the bike down to Class 2 and Class 3 speeds means that it is ultimately still an e-bike at heart and by design, thus making it more approachable to more people. It is when you unleash the power of this beast that it comes alive and gives you all those extra watts and bursts of speed.

How does it handle?

The Juiced HyperScorpion actually feels quite lighter and nimbler than its 102 lb (46 kg) curb weight might imply.

With front and rear suspension, sticky street tires, and a bench seat that actually feels comfortable to both sit on and pedal on, the bike is obviously well designed for proper riding — not just for looking badass.

Which it also does.

It even features a true torque sensor to enable comfortable and tuned pedal assist that isn’t jerky or over the top.

The only time things get jerky is when you delimit the Juiced HyperScorpion by putting it in Race Mode. At that point, you’ve got so much power on tap that you need to be careful with the throttle. That power does not ease on — it dumps all at once if you ask for it. That makes your wrist the limiter (as it should be) and also means new riders might want to practice a bit in the lower modes before exploring Race Mode and learning to feather the throttle.

Why does an e-bike need turn signals or mirrors?

The light package and mirrors on the HyperScorpion do two things. First of all, they give me a better sense of the road and my surroundings. Secondly, they let other drivers know I’m not just a toy bike on the side of the road — I’m a vehicle.

The Juiced HyperScorpion gives off a very different vibe, from what I’ve noticed so far. On a typical bike, drivers pay me no heed and fly by me with reckless abandon as if I’m encroaching upon “their” roads.

But with the Juiced HyperScorpion, it has enough of a presence that cars seem to give me more respect and space.

Maybe it’s the bunny ear mirrors. Maybe it’s the fact that I can keep up with the speed of traffic in most places. Maybe it’s a combination of factors. Either way, all I know is I feel safer when cars see me as a legitimate road user and not a “cyclist” that gets in their way (their hypothetical words, not mine).

Plus, when I’m traveling at the higher end of the Juiced HyperScorpion’s speed range, having a bright headlight and mirrors for situational awareness are key safety features that most bicycles simply lack. I don’t always want to have to turn my head to check my six. And I want to see if there’s an obstacle coming up on me at night before it’s right under my tires. The Juiced HyperScorpion does that for me, plain and simple.

Alright, so you like it. But what’s wrong with it?

Yes, as you can tell I’m a big fan of the HyperScorpion.

But as usual, no e-bike is perfect, and the HyperScorpion does some slight sinning as well.

While the heavy weight of the bike isn’t as noticeable while riding, it’s still a behemoth. Don’t expect to lift it into a truck bed or onto a rear auto rack by yourself, unless you’re regularly snatching several plates at the gym. Rolling it around in the garage is fine, but this ain’t an easy lifter, that’s for sure!

And the brakes are good but not blow-you-away good. Maybe I’m just spoiled by my Magura MT5E four-piston hydraulic disc brakes on other e-bikes of this power level. The Tektro’s are still good quality two-piston hydraulic disc brakes, but the higher weight of the bike means it might have benefitted from an extra pair of pistons, at least up front where more braking force is actuated.

Lastly, depending on where you ride could mean you’re in a bit of a legal grey area. Juiced Bikes is careful about indicating that Race Mode isn’t for public streets. And they’re right since most areas don’t allow e-bikes over Class 3 speeds (28 mph or 45 km/h). But let’s be real, you know you’re going to want to pop it into R mode and let ‘er rip from time to (all the) time. Just make sure you’re being both safe and responsible about the way you ride the bike at higher speeds. Don’t fly past riders in the bike lane or otherwise put people in jeopardy. The Juiced HyperScorpion offers a level of power and capabilities that most e-bike riders will have never experienced before. Go easy with them.

Final thoughts on the HyperScorpion

While I’m still able to nitpick here and there about a few parts that I would like to see upgraded, the Juiced HyperScorpion is essentially a win in all areas.

It has the speed and power for serious fun, the handling and suspension for a comfortable ride, the battery capacity to ride all day, and is priced within the reasonable reach of riders looking for this type of performance.

At its current sale price of $2,799, the bike is by no means cheap. But it isn’t a $4,000 carbon fiber e-bike either. The price feels reasonable to me when you consider what you’re getting here.

I’m downright impressed with what Juiced Bikes was able to do with the HyperScorpion, and it’s a testament to just how serious e-bikes have become. This is a true motor vehicle worthy of its place on the road.