Ariel Rider X-Class 52V e-bike review: Having way too much fun on this 36 mph electric moped 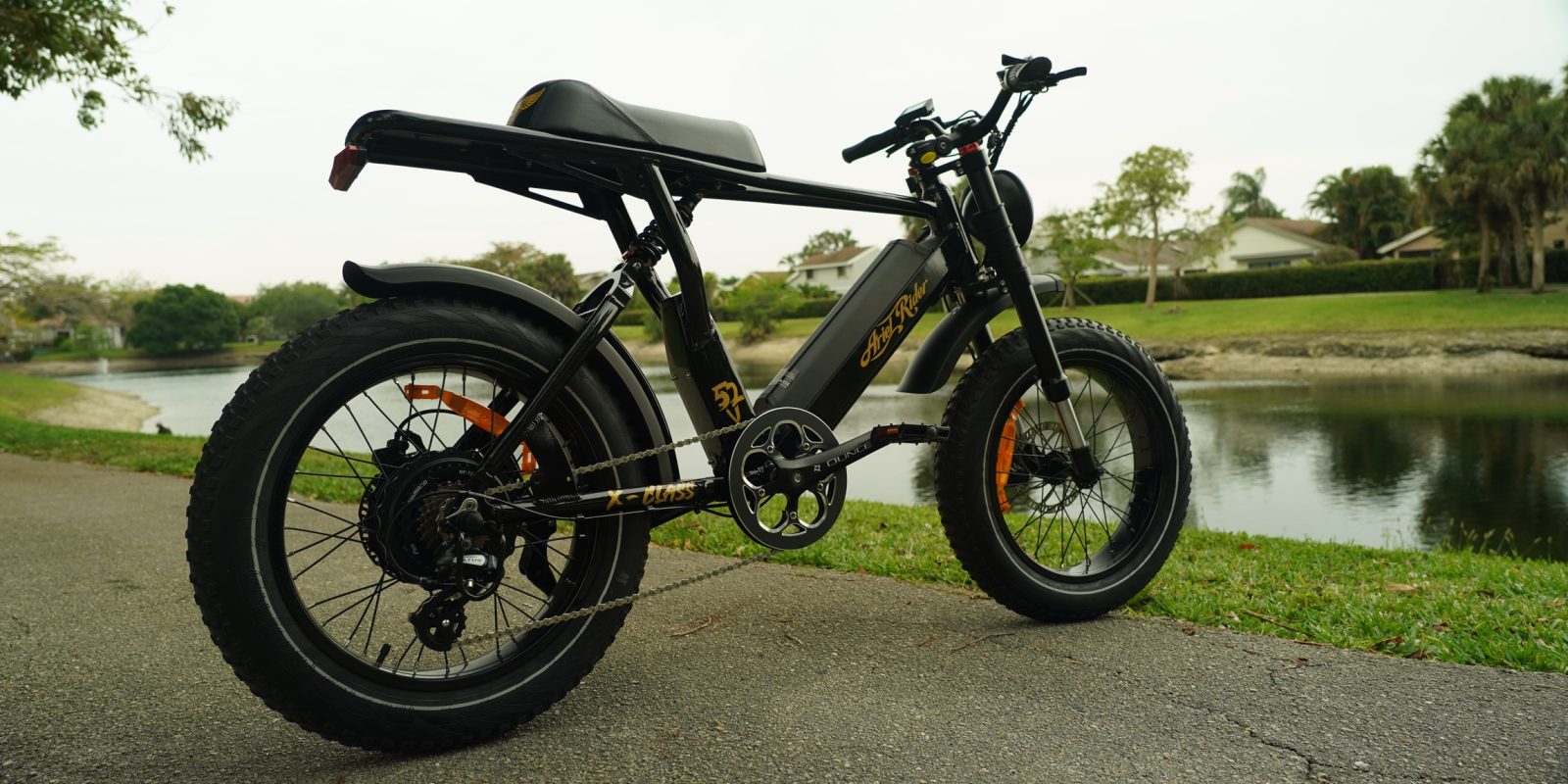 The Ariel Rider X-Class 52V e-bike is one of those electric bikes that just straight up looks like it needs to be ridden. Everything about it screams, “Hop on and rip it!” so that’s exactly what I did.

If there’s one thing Ariel Rider knows how to do well, it’s making fun e-bikes.

There are plenty of other companies out there making high utility e-bikes, or value-priced e-bikes, or any other niche/specialty.

And while the Ariel Rider team can compete there as well, if you only allowed me one word to describe this e-bike, I could do it in three letters.

You’ve seriously got to check out my ride video below to see the Ariel Rider X-Class 52V in action. And don’t forget to keep scrolling to read the rest of my review!

I really didn’t expect the X-Class 52V to be this powerful.

Sure, it’s got a big ol’ chunky motor in back, but it’s just a single motor. The Ariel Rider D-Class I tested last year was crazy powerful because it had two motors. But the Ariel Rider X Class still offers tons of oomph with even the single motor.

That’s thanks to its 1 kW continuous power rating that actually peaks at 2 kW. For those keeping score at home, that’s a lot of power in one e-bike.

It’s enough to make this thing really fly. I made it up to a top speed of around 36 mph (58 km/h) with the bike unlocked, though I should point out that it arrived in Class 2 mode with a 20 mph (32 km/h) limit.

When it comes to riding in the road with cars, faster e-bikes always feel safer to me. I really appreciated the higher speed of the X-Class 52V here because I could keep up with cars for the most part. That meant I wasn’t getting passed on the side of the road by drivers constantly buzzing my left handlebar.

And with nearly a full kilowatt-hour of battery capacity (52V 18Ah), I got surprisingly good range out of the bike, too. You’ll basically never see the optimistic 75 mile (120 km) range that Ariel Rider claims, since that would require you to keep the bike in the lowest pedal assist mode. With moderate throttle use I found that 25-30 miles (48-ish km) of range was doable. Staying at top speed will drop that range, while easing off the throttle and pedaling a bit will increase it.

When it comes to pedaling, it’s possible – believe it or not. But it’s not the best pedal assist e-bike. It’s not that the pedal assist doesn’t work. It works well. The issue is the bike’s geometry. It’s just not set up for comfortable pedaling. The seat isn’t adjustable, so you wind up with high knees. It can fit a wide range of riders just sitting on it and throttling along, but the pedal geometry just isn’t there to make it a good pedaling bike.

If I had to pedal the bike home, I could do it. But it’s not comfortable for long periods of time. If you’re looking for a fitness e-bike, this ain’t the one. Get something else.

If you’re sticking to the throttle, though, the bike is plenty comfortable. That cushy seat felt great to me, and there’s also the option to swap on a longer bench seat that can fit two riders. There are even super beefy passenger foot pegs so your pillion rider has a comfortable place to put his or her feet.

I commented on the D-Class’s somewhat wimpy foot pegs when I reviewed it last year, and Ariel Rider let me know they were replacing them with stronger foot pegs.

This is the first time I’ve tested the new model of foot pegs and I can confirm: Ariel Rider came through in a big way.

One last note about comfort, but it’s a big one: The X-Class has a very forward-leaning seating position.

Gone are the D-Class’s high handlebars. They’ve been swapped for low bars on the X-Class, giving a more cafe racer ride stance.

It’s super sporty, but it might not be everyone’s cup of tea. Fortunately, there is an adjustable stem riser that allows you to lift up the bars and bring them back in by a few inches if you’d like. You can see what I mean in my video review above.

There’s no sophisticated linkage like on a mountain bike, but it does its job by soaking up those potholes, speed bumps, and curbs. It’s also adjustable in both preload and rebound, meaning you can dial it in to your perfect setting based on your weight and ride style.

Out of the box, I felt like the rear shock was a bit stiff, but after playing with the suspension’s adjustments, I was able to dial it in for my tastes and then it performed like a dream.

For the most part, all of the components perform like I’d expect. The brakes are strong, the suspension is comfortable, the tires are more than sufficient, the battery is large, the shifter… shifts.

The only part that surprised me in a negative way was the headlight. It’s got a massive housing so I expected it to be blinding, but it was just OK.

Not crazy bright – not something that will light up the road way ahead of you on a pitch black night. But plenty for letting cars know you’re there.

It’s a be-seen light, similar to most e-bikes. It just comes with a more badass housing, that’s all. I did find that some dude on YouTube made a tutorial to swap the lower-intensity LED bulb to a motorcycle LED bulb (it takes a little finessing), so you’ve got that option, assuming it doesn’t void the warranty.

Otherwise, everything either met or exceeded my expectations on the Ariel Rider X-Class 52V. The company even goes the extra mile to include small things like a bag of extra mounting screws and some touch-up paint that matches your bike.

Those things obviously don’t add much to their costs, but it’s a nice way of saying “We care” that you just don’t see very often in this industry.

For a $2,099 e-bike, you’re getting huge performance. Though there’s also the option of turning the bike into something of a utility or even delivery e-bike with a rear rack and basket.

I installed both on mine and it added some crazy storage space to the back. You could load that sucker up and still have the power to climb hills. If the bike can carry a passenger, you better believe it can carry a bunch of cargo.

I think $2,099 is a fair price for such a high-performance e-bike, but if you’re looking to save a few bucks with a slightly lower-power version, the entry-level X-Class sports a 48V system and is priced at just $1,599 – which frankly is a steal.

What do you think of the Ariel Rider X-Class e-bike? Let me hear your thoughts in the comment section below!