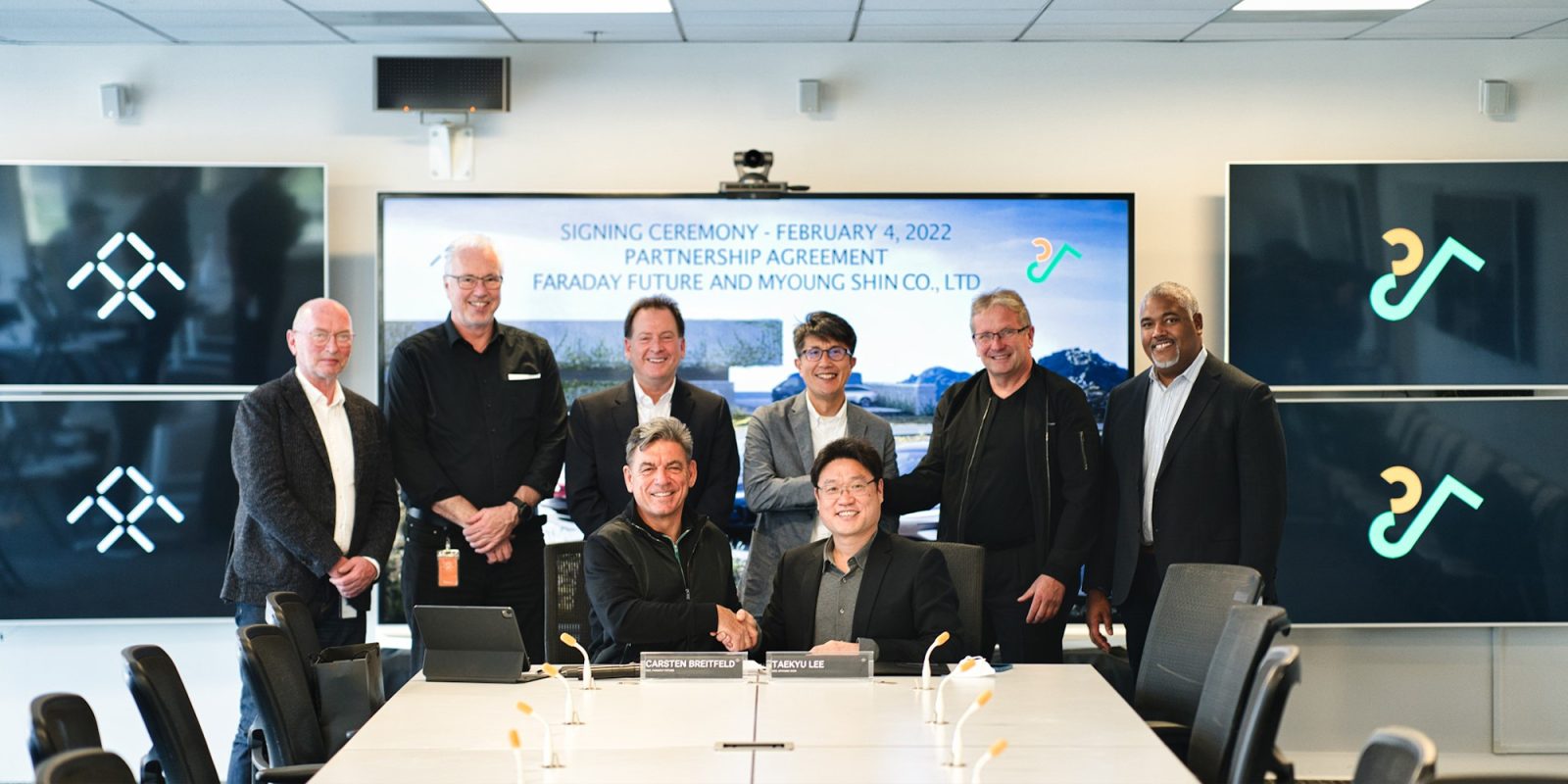 Southern California EV startup Faraday Future has shared news of a new partnership with South Korean automotive manufacturer Myoung Shin to produce its FF81 mass-market EV. Start of production is scheduled to begin in Korea in 2024, following Faraday Future’s production of its limited run FF91 EV in the third quarter of this year.

Faraday Future was first founded in 2014 in Carson, California, south of Los Angeles. In addition to developing EVs like its upcoming FF91 and FF81, Faraday Future also describes itself as an internet and technology company, an AI product company, a software company, and a user ecosystem company.

In January of 2021, Faraday Future announced it would be entering the Nasdaq through an SPAC merger with Property Solutions Acquisition Corp (PSAC) valued at $3.4 billion. The company began trading under the ticker $FFIE last July.

Last October, investment firm and noted short-seller J Capital Research Ltd. released a 27-page report on Faraday Future, stating it believes that the automaker will never deliver an EV, and its shareholders are poised to sell out.

Regardless, Faraday Future has continued development of its pendant FF91 Luxury EV and has now shared production plans for a second, mass-marketed model.

The EV startup shared the news of its new partnership in a press release complete with comments from both parties. As part of the deal,  Myoung Shin Co., Ltd. has been contracted to manufacture Faraday Future’s FF 81 with a start of production (SOP) scheduled for 2024.

The FF81s will be built at Myoung Shin’s plant in Gunsan, which will offer scale, flexibility, and port access. According to Faraday Future, the agreement states that Myoung Shin will also maintain the required manufacturing capabilities and capacity to supply the number of FF 81 EVs to match its creator’s forecasts. Considering we know virtually nothing about this second, mass-marketed EV so far, those forecasts have to be quite blurry right now.

An EV we are all quite aware of is the long-promised FF91 which has yet to reach the coveted production lines, despite years of development through a turbulent past for the company. Faraday Future has offered a quick update, stating it intends to begin FF91 production in Q3 of this year. Faraday’s Global CEO, Carsten Breitfeld spoke to both upcoming EV models:

We are delighted to have a partner of the quality and reputation of Myoung Shin. This agreement to produce the FF 81 puts us on track to deliver on our promise to reach high volume production in 2024, the most important milestone on our path to profitability. Our own third quarter launch of the FF 91 will redefine the state of the art in the luxury EV segment, and with Myoung Shin, the FF 81 will bring our market-leading technology to the mainstream luxury segment.

According to the release, Faraday Future plans to expand its geographic reach with manufacturing operations in China. One step at a time, guys.

I personally like this move from Faraday Future, who appears to be excellent and dreaming up and designing cars, but has had some trouble bringing them to reality. There is no shame in partnering with an automotive manufacture that has the experience, infrastructure, and most importantly, the capacity to get a larger number of EVs made for mass-market sales.

Fisker Inc. has taken a similar approach with its Ocean SUV by partnering with Magna and appears on track to begin production of this flagship EV this fall. Faraday Future still has its work cut out for it producing the FF91 here in the States, but if successful, it will have more funds to get this second EV out to a larger market… assumedly at a more consumer-friendly MSRP as well.

For now, all eyes are on Q3 to see if we will soon be driving the FF91. Looking forward to further details of Faraday Future’s FF81 as well.