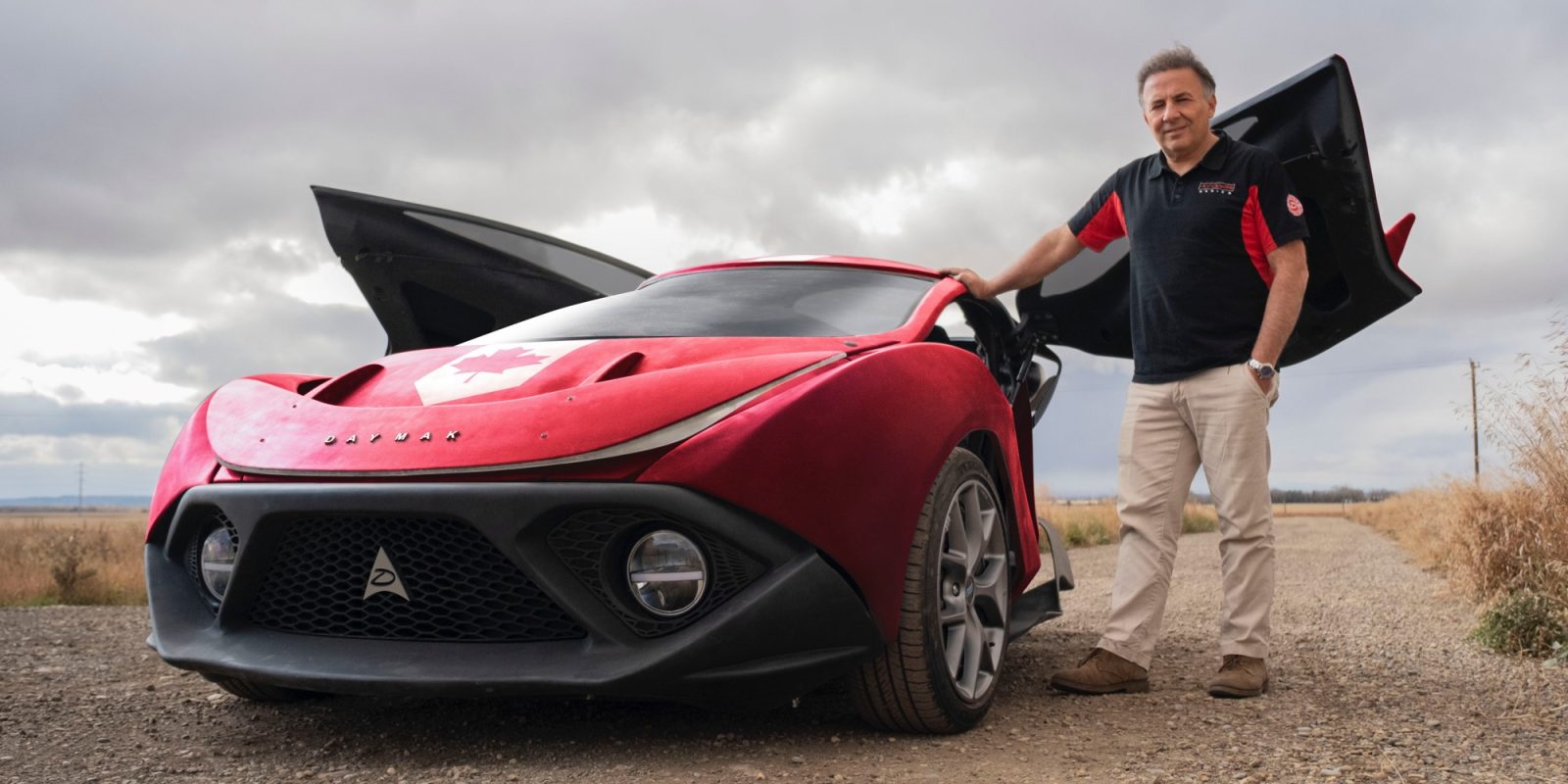 Toronto-based Daymak is showing off its initial prototype of the Daymak Spiritus today. The three-wheeled electric vehicle is one of the first models in the company’s premium Avvenire EV line.

The Avvenire line includes a wide range of EVs, from smaller electric bicycles to this three-wheeled EV and even a flying vehicle. It’s a huge leap forward for a company mostly associated with a vast selection of electric bicycles and scooters.

The Daymak Spiritus prototype unveiled today is a light electric vehicle with a car-like look, at least from the front.

From any other angle, the three-wheeler looks rather unique. Its single rear wheel gives it a tadpole tricycle design and creates an aerodynamic shape that plays a role in the Spritus’ 180 mile (290 km) range rating. The three-wheel design also qualifies the vehicle as a motorcycle in nearly every jurisdiction, meaning it doesn’t have to conform to the same rigorous standards as passenger cars.

Daymak claims to already have 25,000 pre-orders for the $19,995 Spiritus, but the pre-orders were placed as $100 reservations when the car began selling back in March of this year.

“A poster from 2005 of our Spiritus concept three-wheeler still hangs in my office, so finally seeing our vision come to life 16 years later and sharing that dream with more than 25,000 people who ordered the vehicle is a very special moment for us. This prototype is a major milestone in our commitment to the Avvenire program, and having achieved this goal, the rest of the journey is finally coming together.”

Even if many of those reservations don’t convert to actual orders, there’s still obviously huge interest in the car.

Daymak plans to provide the Spiritus in two models, the base-level Spiritus Deluxe and the higher-spec Spiritus Ultimate.

Daymak expects to the Spiritus to begin deliveries in 2023, and says the vehicles should come loaded to the headliner with technology, as Baiocchi explained:

“With a fraction of the moving parts, and with the recent leaps in AI, IoT, blockchain, and green tech, we believe that the beauty of electric vehicles, specifically three-wheelers, is that they can outperform any vehicle out there in utility and convenience at a fraction of the cost. The Spiritus will do just that. We pledge that our pre-order customers will find themselves behind the wheel of the world’s most advanced and most exhilarating three-wheeled vehicle on the planet when they take delivery as promised in 2023.”

The images sure look awesome, the specs sounds great, and Daymak has been around for nearly two decades.

But they are mostly an e-bike and scooter company. So while I’d love to see them build some awesome EVs that are faster than a Tesla Roadster and that literally fly, I’m going to want to see some proof before I start plopping down my paycheck.

I have no problem with three-wheeled EVs. I love me some good ol’ Arcimoto FUV, but this is coming out of left field for Daymak. And it’s not like the whole industry isn’t once bitten, twice shy about these three-wheeled electric cars.

But I guess if anyone is going to promise outlandish EVs, I’m at least glad to see it’s an established company and not some new startup with just some seed funding and a fancy drawing.

So now the ball is in your court, Daymak. Show us that this is legit.