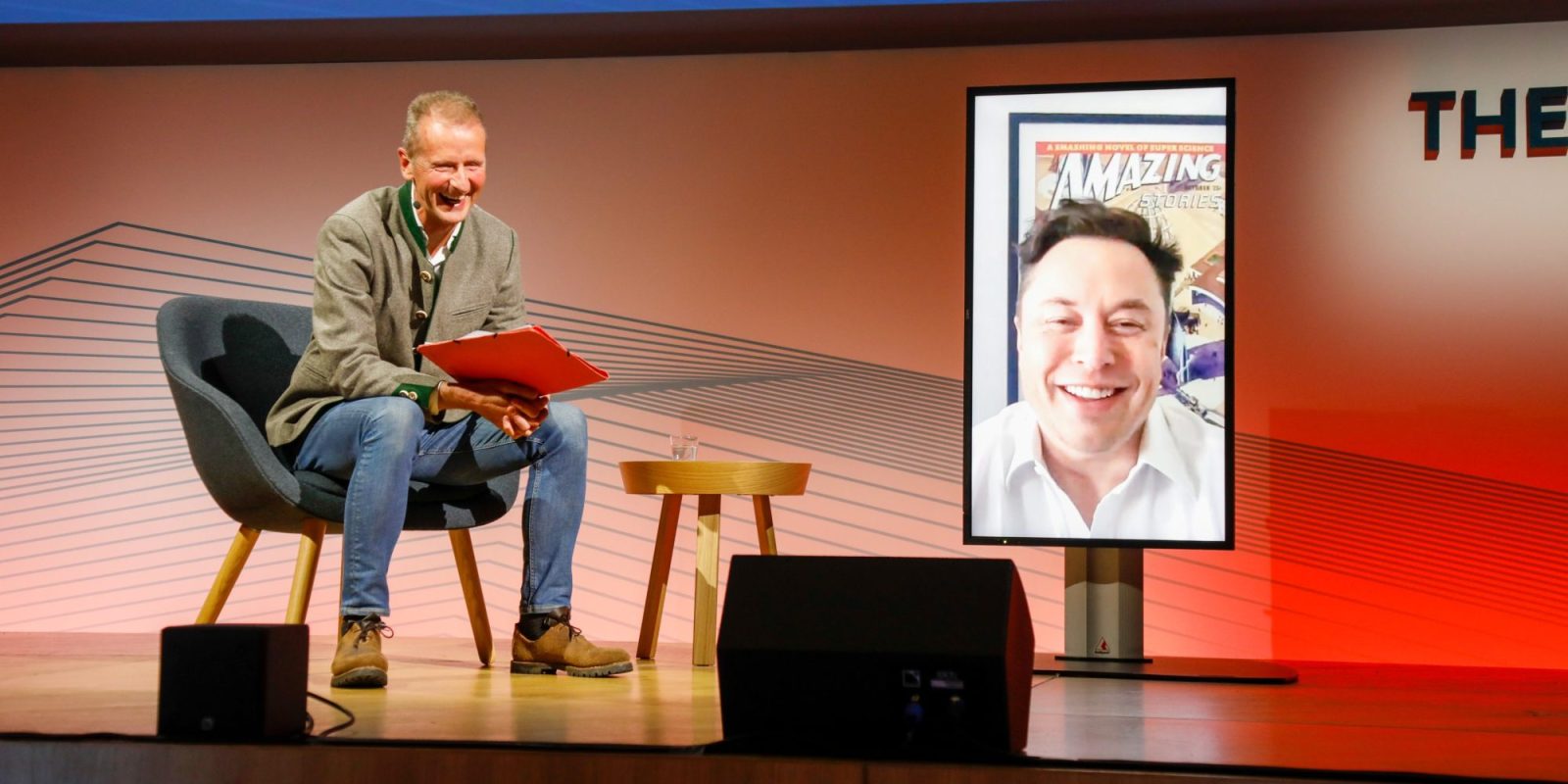 Herbert Diess, CEO of VW, invited Tesla CEO Elon Musk to call in to an internal conference with 200 VW executives in an effort to spur further innovation from his company. The two auto execs continue to have a beyond cordial relationship after Musk tried to hire Diess to become Tesla’s CEO.

The VW executive conference happened in Alpbach, Austria, and included a lecture by Erin Meyer, a business author and professor of business, and “surprise guest” Musk, who joined via videoconference. Musk’s comments were first reported by Handelsblatt and later confirmed by Diess.

The focus of the conference was to get VW executives on board with the massive changes VW will need to make to confront the changing auto industry. Diess recognized that VW “did many right things in the past, in the old world Volkswagen is strong, but there is no guarantee for the new world.” He wants VW to make “faster decisions, less bureaucracy, more responsibility”.

As examples of this, Meyer spoke about Netflix’s transformation from DVD to streaming to content production, and Diess spoke with Musk about the reasons Tesla is more nimble than its rivals. Musk reportedly answered: “It’s the management style. I’m primarily an engineer and, besides the car, I’m fascinated by supply chains, logistics, and production processes.”

Diess gave the example that Tesla was better able to handle the current global chip shortage than the rest of the auto industry because their software teams rewrote Tesla’s software in just 2-3 weeks, allowing the use of different chips.

The two CEOs have met in the past, and seem to get along with each other. Musk stated that he thinks VW can succeed in the transition to electric vehicles, and both consider the other company as their “strongest competitor.” Diess also stated that he plans to visit Tesla’s Gigafactory Berlin in Grunheide soon.

Other automakers have suffered difficulty in the past in getting top executives on board with the transition to electric vehicles. One prominent example was former BMW CEO Harald Kruger, who became CEO in 2015. He came in with a vision to expand BMW’s electric offerings but was faced with significant internal resistance from upper BMW executives, according to sources within BMW’s electric division. In 2019, Kruger resigned as CEO, citing his failure to spur BMW’s EV transition.

Here at Electrek, we’ve always been on “team electric.” While there is a lot of discussion of “competing” electric vehicles (Tesla Model Y vs. VW ID.4, for example), the real competition is not electric cars, but gas ones. The electric vehicle industry, and we as electric vehicle advocates, need to present a united front against inefficient, polluting gas vehicles. The same team – we’re on team electric, not team pollution.

So we’re glad to see that Herbert Diess, the head of Voltswagen, the largest car company in the world, which sells more gas-powered cars than anyone else, is of a similar mindset. Inviting an “upstart” competitor to an internal conference is no small statement, especially after many years of the wider auto industry dismissing (and finally begrudgingly accepting) Tesla and EVs in general.

Of course, Diess is also doing this because he sees the writing on the wall, knows the industry is transitioning, and wants to ensure that VW can move quickly enough to survive the shift. He thinks that a slow transition to EVs could cost VW 30,000 lost jobs. But to his credit, VW has been perhaps the most serious of the major automakers about transitioning to EVs (partially after being forced to due to Dieselgate), and Diess speaks loudly about EV tech and climate change quite often.

While we have not yet heard a recording of the conference and thus don’t know Musk’s full comments, we would not put the whole reason for Tesla’s success solely down to Musk’s “management style” (ego much, Elon?). While a strong CEO who refuses to compromise on innovation certainly can contribute to a company’s ability to move quickly, Tesla benefits from many other factors independent of its CEO.

Tesla is a Silicon Valley company, grown within Silicon Valley culture from the beginning. This culture emphasizes innovation, new ideas, iconoclasm, and so on. It’s also a smaller company that began with the “startup mentality” of shaking up the industry – and everyone working at Tesla came to the company with that goal in mind. These lead to natural benefits when it comes to nimbleness, and giant, old companies like VW will inevitably have a harder time with innovation. They also have so many sunk costs in the capital-intensive apparatus of running a global auto manufacturer.

But VW CEO Diess at least wants to turn his ship as quickly as possible. And bringing in outside moral support, especially from his company’s “strongest competitor” is quite admirable. It is also admirable of Musk to accept the invitation. Tesla’s official mission statement is to “accelerate the world’s transition to sustainable energy,” and working with a competing automaker to strategize about their future is a great example of that. While Musk has at times been dismissive of some EV efforts, we’re glad to see him put his mouth where Tesla’s mission statement is and work alongside the largest manufacturer in the world to better and more quickly electrify transportation.

We can only hope for further collaboration, across the auto industry, to get us to electric transport as quickly as possible. For instance, Tesla is supposed to let at least one other brand use its Supercharger network in the US within a year and VW would seem to be a frontrunner. Same team, everyone.