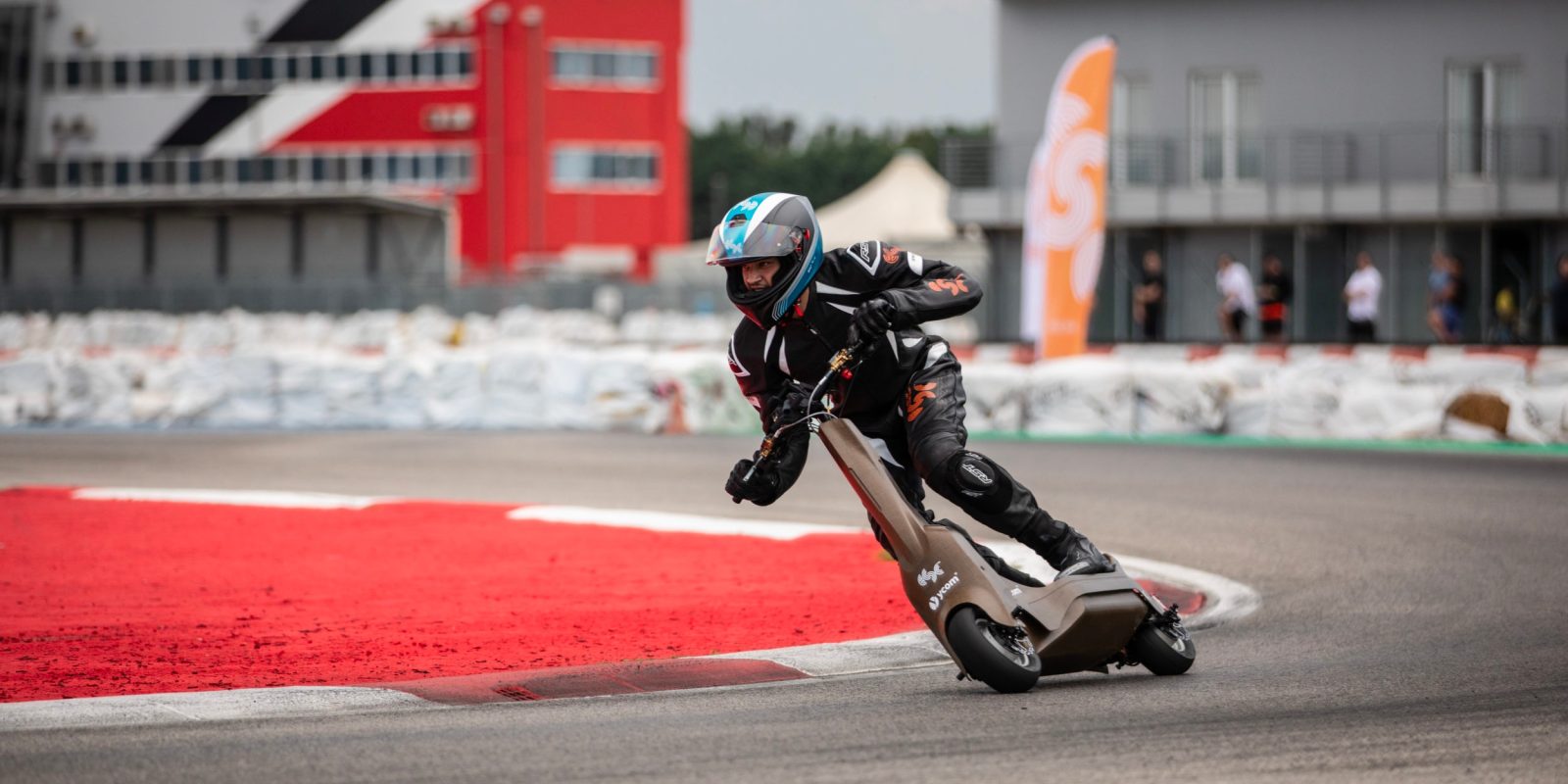 They say the first car race occurred shortly after the second car was built. Speed junkies have long created races around just about every form of transportation out there, so it comes as no surprise that electric scooter racing would eventually pop up.

What is surprising though is just how freaking fast these racing scooters actually are, capable of exceeding 60 mph (100 km/h) on what looks like an overgrown kid’s toy.

But these are far from any children’s toy I’ve seen. Weighing in at 77 lb (35 kg), the YCOM S1-X electric scooters were custom-built for the eSkootr Championship (eSC).

The eSC is the first and only high-speed standing electric scooter racing league, and it’s as bonkers as it sounds. We first covered the league over a year ago when it announced its intentions and began looking for teams.

Fortunately for everyone who has ever wanted to see dudes on small-wheeled scooters take turns at highway speeds, enough teams signed up that the league was able to get off the ground and rolling.

Earlier this year eSC unveiled its S1-X electric scooter, and now we’re getting our closest look yet at the new scooters, along with an inside scoop on how they were tested ahead of next year’s racing commencement.

To minimize costs for racing teams and lower the barriers to entry, the eSC decided to standardize around a single scooter design. Motorsport engineering company YCOM was chosen as the designer, ultimately producing the high-power S1-X electric scooter for the league.

The 12 kW (16 hp) electric scooters split their power between two in-wheel hub motors, and a special boost button will be available to dump an extra 20% power on straightaways. Stored energy comes from a 1.5 kWh battery under the deck of the scooter.

We’ve seen other electric scooters achieve ranges of over 60 miles (100 km) with a battery of that size, but at much more reasonable speeds of around 25 mph (40 km/h). At the speeds and power levels that the eSC will see, don’t expect anywhere near that range. A dozen or so laps of a less-than-half-mile track could be all she wrote for such small batteries.

The scooter’s carbon fiber chassis is described by YCOM as being clad in bodywork that is “aerodynamic and environmentally-friendly,” though it’s not clear how they earned the latter part of that designator. Between the carbon fiber chassis and machined aluminum components, the scooter is actually fairly lightweight for such a high-power ride.

We’ve tested other electric scooters that achieved speeds nearly this fast yet weighed around 25% more.

So far, YCOM has delivered 10 electric scooters and has another 20 more in the works to be delivered before racing begins.

The first 10 units began trials with a group of 16 riders, but the first tests were run with the scooters limited to 40% power.

As testing progressed, the power was incrementally increased up to 70%. By that point, riders reported feeling “fatigued by the physical demands of such speeds and lean angles of up to 55 degrees.”

YCOM explained that “with improved physical conditioning and additional practice in October testing, it is hoped that the riders will be able to use 100% power as well as the additional 20% temporary boost function in the first race.”

People are always going to ride fast, powerful, and sometimes crazy-looking contraptions as long as they exist. At least this way it can be done in a somewhat regulated, presumably supervised fashion and with paramedics standing by.

And at least we can all watch.

While this does sound extreme (and it is), I will say I’m glad to see that the riders are outfitted with full motorcycle racing suits and helmets, and it looks like they are serious about safety. Creating custom-designed race tracks is also a good step in the right direction. Some of the worst automotive racing disasters in history have come about from vehicles racing on tracks that weren’t designed for them (the 1955 Le Mans disaster springs to mind).

So, if people are going to take small-wheeled, overpowered, and unstable vehicles up to breakneck speeds, at least they’re going to do it in a controlled and entertaining fashion. What more can you ask for?

You better believe we’ll be following up to see how these daredevils fare when the power is cranked to the max. Stick around for more coverage in the future, and let us know your thoughts on the eSC’s racing plans in the comment section below.