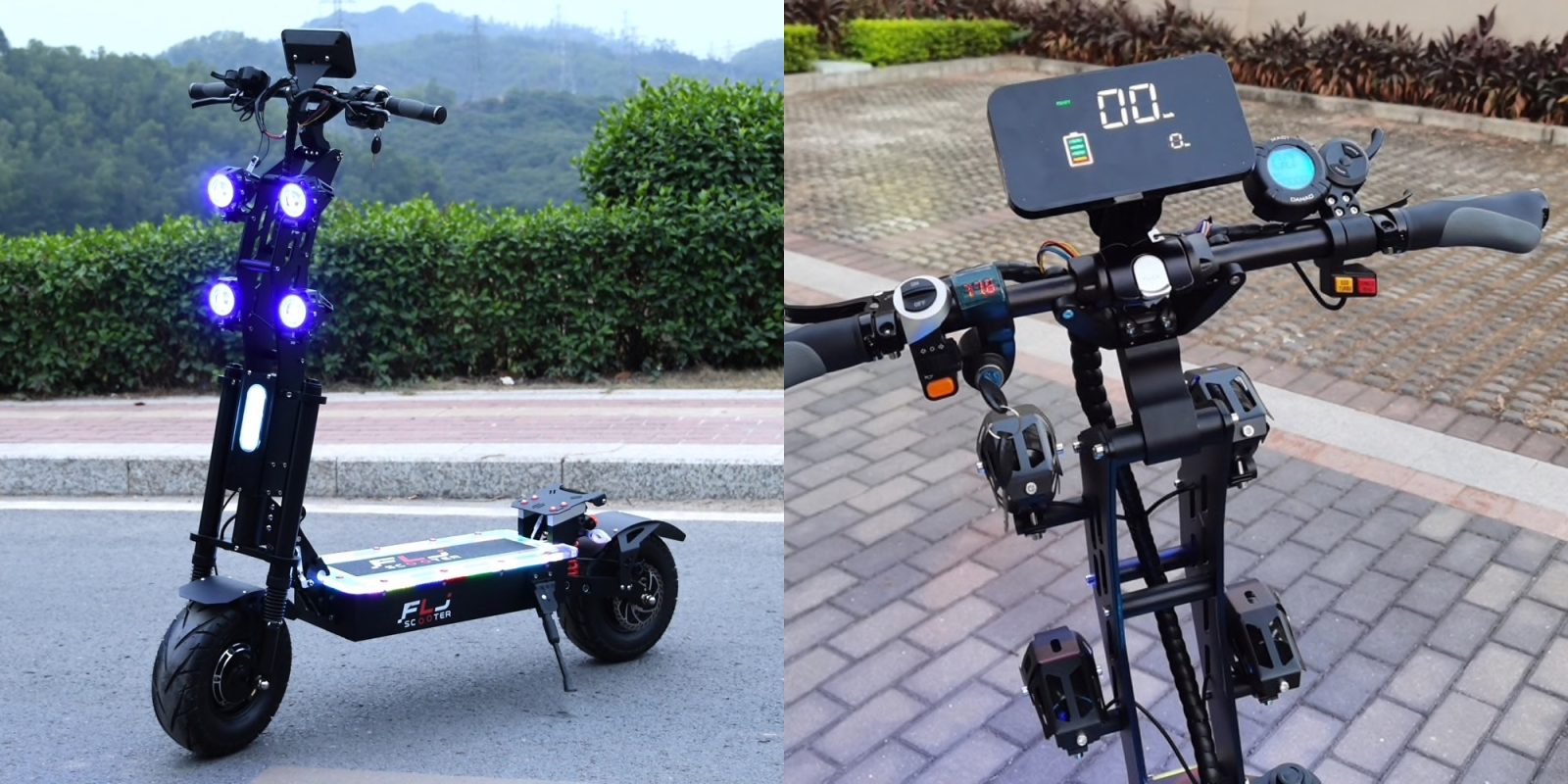 When it comes to crazy electric vehicles from Alibaba, I’ve seen and written about seemingly every category under the sun. From animal-shaped electric boats and e-submarines to electric versions of Henry Ford’s Model T and even electric motorcycles with only one wheel. But never before have I found a direct-from-China EV that was as equal parts fascinating and suicidal as this one. And so it is with a combination of morbid curiosity and substantial trepidation that I present to you this week’s Awesomely Weird Alibaba Electric Vehicle of the Week: a 60+ mph (100 km/h) standing electric scooter.

You know, like a Bird electric scooter. The kind you ride to go get a coffee.

Except this one looks like it ate a few Bird scooters. And it’s the kind you stand up on to go meet Odin in Valhalla.

This massive electric scooter touts a peak power rating of 8,000 W from a pair of gigantic hub motors. That’s enough power to rocket this bad-idea-on-wheels to a claimed 100 km/h, or 62 mph.

I’d call the scooter death defying at these speeds, but I think it might be more accurate to call it death inducing.

The vendor helpfully mentions that the scooter can be limited to 25 km/h (15.5 mph), presumably to make it street legal. Good luck explaining that to the cop that pulls you over after finally catching up with you. I imagine it’d be a bit like pointing to the turn signals you added to your monster truck while stamping your foot and indignantly saying “See, officer?”

The scooter comes with two 72V battery options of either 35Ah or 45Ah. But let’s not kid ourselves, if you’re getting something this ridiculous, then you’re going to max out the pack.

Still not too shabby!

That’s a big battery; credit where credit is due. It’s so big that the scooter even comes with two chargers so you have a prayer of filling that battery in a single overnight charge.

The good news is that even though you’ll be flying through the night at breakneck speed (perhaps literally), people will surely see you coming from a distance and have time to get out of the way. That’s because this rolling liability has more lights than a landing strip at O’Hare.

There are four giant spotlights, standard headlights, “ambient lighting,” LED lights built into the acrylic deck, tail lights, and turn signals. Even the instrument display lights up like a Christmas tree.

To be honest, though, that’s a pretty nice instrument panel. Despite the relatively low price of $2,645, the screen seems nicer than you used to find on most electric Zero Motorcycles costing 5-7x the price (until Zero updated those screens lately).

And while I’m making concessions, the scooter actually seems fairly decently built. The full suspension will at least give you a fighting chance when you hit anything on the road larger than a pencil at max speed. And the 13-inch wheels are quite large by scooter standards. They might even help you fare better against potholes. Of course you could also use the scooter’s other defense against potholes: Just hit them at 60 mph and your wheels won’t have time to drop down into them.

Check out how many gadgets we’ve got on those bars, too! This scooter is more decked out than a mall rent-a-cop’s tactical belt.

One area of the sales page that I absolutely love is the “notes” section. In it, the seller provides a couple key pieces of advice for prospective new scooter owners:

Note:
1.This scooter is not 100% waterproof, the water can not come in the battery (water don’t steep the pedal);

2. For the drop testing in the video, it don’t mean customer can drop it. Pls love your scooter and protect it carefully.:)

That is to say, this scooter appears to be able to handle anything you could throw at it up to and including the apocalypse, as long as it’s a dry end of times. And also, don’t drop your scooter. Though good luck even trying not to. The damn thing weighs 58 kg (127 lb).

I also love how the kind helmet-less organ donor in the demo video below is decked out in tactical elbow and knee pads but is just raw-dogging it down the road with no skid-lid. This man made the conscious decision to ride a 60 mph standing scooter with no helmet, but then thought to himself, “I better protect myself with elbow pads, that’s how I make my money.”

For the actually reasonable price of $2,695, the scooter may just be one of the cheaper ways to go out in a blaze of glory on a thrill ride.

I’m not saying I recommend anyone get one of these, and in fact I’m actively advising against it. Though the free shipping is working against me by making this out to be an even sweeter deal – if the kind of deal you’re looking for is a kamikaze scooter.

I suggest we all sit this one out and just enjoy the scooter on paper for its ridiculousness. There are plenty of other fun and weird electric vehicles on Alibaba that won’t actively try to kill you.

Check out some of my other Awesomely Weird Alibaba Electric Vehicle of the Week finds below, or drop me a line if you happen to find something fun and weird in your own perusings!