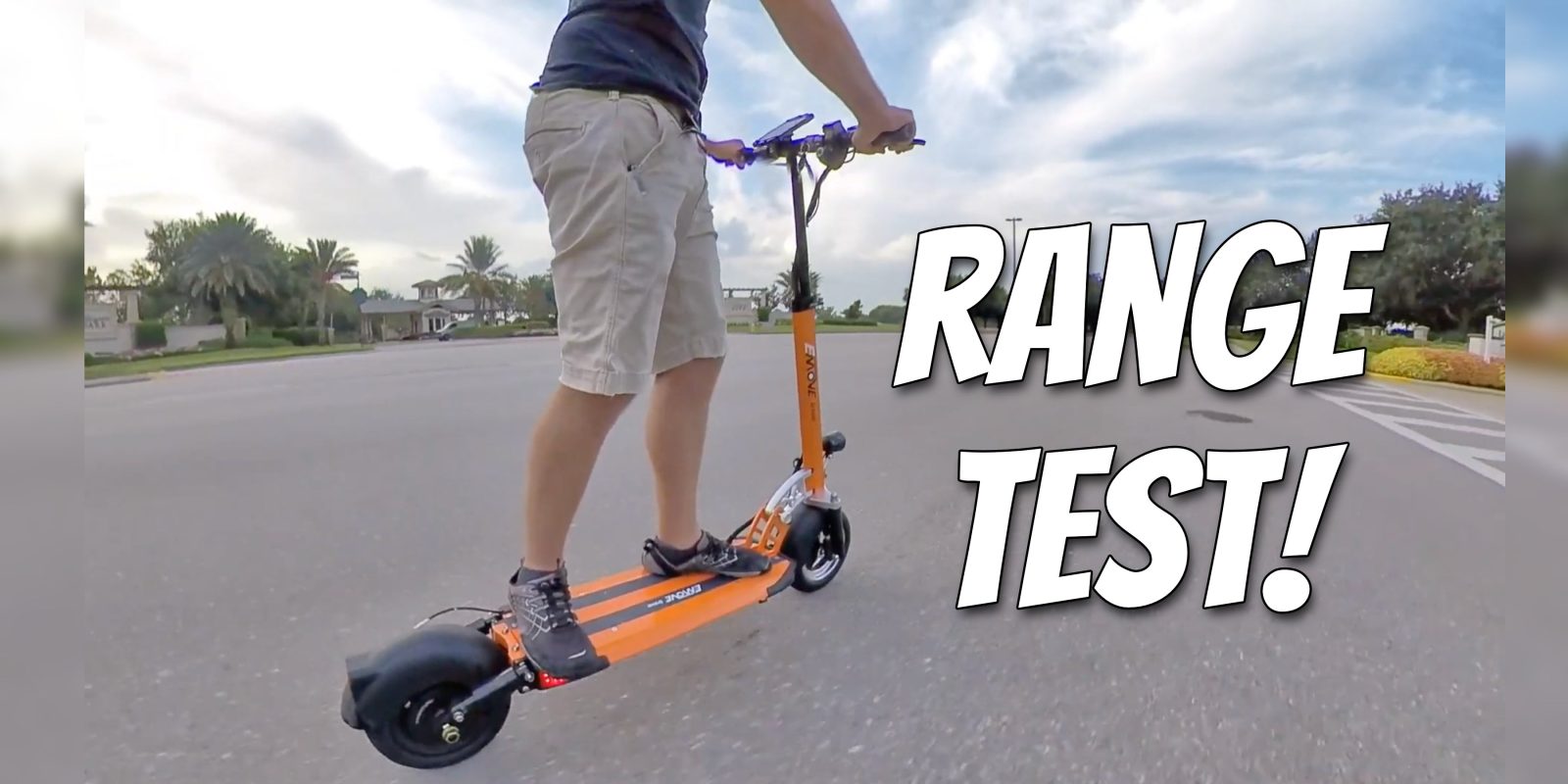 The EMove Cruiser from Voro Motors is a beast of an electric scooter, offering full-suspension and a powerful 1.6 kW peak-rated motor. But its biggest draw might be its giant 52 V and 30 Ah battery, rated for 1.6 kWh of capacity and an unbelievable 100 km (62 miles) of range.

In fact, that range is so unbelievable that I decided to call the company’s bluff. I set out on a full battery range test to determine the true real-world range of the scooter.

Many electric scooter companies provide ranges based on “ideal conditions”, which is usually a euphemism for riding slowly in Eco mode on a perfectly flat track with zero stops and zero hills.

That might be fine for setting records, but it doesn’t cut it when we want to know real world range.

So to make this a real test, I set out with a full battery and rode in the highest power mode, which is how most people ride the scooter every day. I traveled at full throttle for almost the entire test, slowing only when necessary during turns or at intersections.

Since I conducted the test in Florida, I was riding without much topography or hills, but everything about my test was representative of real-world usage.

Check out my epic test below to ride along with me and experience the journey first hand. (Spoiler alert: I condensed around 3 hours of riding into about 5 minutes and it’s worth the watch!)

As I mentioned, everything about my test was representative of actual real-world riding. Well, except for the fact that I woke up at 5:00 AM on a Saturday to begin, ensuring I missed the worst of the south Florida heat and saw fewer cars on the road.

I used my phone’s GPS to track my ride, which had the side benefit of showing me that the EMove Cruiser’s own odometer and tripmeter read about 10% higher than they should. By the time I reached a real 10 km (6 miles), the EMove Cruiser was already showing me just over 11 km (6.6 miles) on the built-in display. So I stuck with my GPS-verified data for the rest of the ride.

The EMove Cruiser’s lights were actually quite bright and useful since I started riding before the sun came up.

As dawn quickly approached, I decided to leave the scooter’s lights on for the rest of the ride, since they are a safety feature that I’d recommend riders use 24/7 anyways. They might use a bit of extra electricity, but I didn’t expect them to impact the range too much.

As time continued its unrelenting march forward and the miles rolled by, I found myself an hour and half into the test with 56 km (35 miles) in my non-existent rearview mirror.

Despite the scooter’s suspension, my feet were getting pretty sore – though I shudder to think what an hour and a half straight on a non-suspension scooter would feel like.

I also found that the speed was slowly dropping. I started out at just over 40 km/h (25 mph), but my full-throttle speed had reduced to around 37 km/h (23 mph) at this point.

That’s normal for electric scooters and e-bikes, as speed (when not software-limited) is voltage-dependent and can drop as the battery voltage drops during riding.

But at only an hour and half in, I still had more riding to go, so after a few minute break to stretch my legs and record some riveting commentary for the video above, I hit the road again, determined to drain the EMove Cruiser’s battery.

I kept riding, toughing it out until my next stop at just over 2 hours into the test. I had traveled over 80 km (50 mi) at this point. Despite being fairly impressed with both the EMove Cruiser and with myself, the ride was admittedly less fun at this point. No one rides for this length of time in normal scenarios and now I can see why: it’s both boring and exhausting. I was riding on public roads and thus had to always be vigilant about cars and hazards, especially as morning traffic was picking up.

But I’d come this far, I couldn’t stop now! And so I soldiered on (or scooted on), determined to finish this test like the starry-eyed (and slightly dehydrated) optimist I had become.

The miles kept rolling by and the speed gradually slowed closer to 32 km/h (20 mph), but at 2 hours and 46 minutes into the test, I pulled over to the side of the road as I was greeted by the most glorious site ever, the beautiful “100.06 km” adorning my GPS screen.

I had done it! Or rather, the EMove Cruiser had done it. Against all odds, and even against my own expectations, a full-speed ride in real-world conditions had shown that Voro Motors wasn’t BS-ing with their range rating – the scooter could really achieve 100 km or 62 miles of range.

But of course, I couldn’t stop here! I was in this too deep now, and so I had to play it out until the end and finally drain this battery until it was empty.

And fortunately for me, the end came quickly, as the speed began to drop off at around 103 km (64 miles).

I entered the “limp home” mode as the speed reduced to around 18 km/h (10 mph) and continued dropping until I reached walking speed at just under 104 km (64.6 mi). At that point, I decided to call it. Fortunately, I had planned well and the battery died only a half-mile from home. I was able to push-kick the scooter the rest of the way home like the heaviest children’s scooter in the world – exhausted yet proud.

So what did I learn?

Despite the incredible 104 km (64.6 mi) range of the EMove Cruiser, obviously no one needs this much range for a single trip.

I don’t recommend anyone try scooting this long. And if they do, they should at least take rest breaks often.

But the large battery in the EMove Cruiser still serves a number of purposes. It means that charging can be done infrequently. Unlike smaller scooters that need to be charged after every ride to avoid inducing range-anxiety in their riders, the EMove Cruiser can likely go a week or more of daily riding without needing a top off.

The large battery will also last for many more years. Most Li-ion batteries are rated for 600-1000 charge cycles. With a bigger battery, the rider puts it through fewer charge cycles in the same amount of time, lengthening the usable life of the battery.

The large capacity of the battery also means the battery doesn’t have to work as hard. It’s the equivalent of one guy moving a refrigerator versus several movers lifting as a team. Most electric scooter batteries use 20-30 battery cells. The EMove Cruiser has over 100 battery cells. Many hands make light work.

Of course, a larger battery adds to the price, which is part of why the EMove Cruiser costs $1,399, (though the powerful 1.6 kW motor and full-suspension certainly add to the price as well). But we’ve got you covered with the discount code ELECTREK to take over $100 off the price. For a long-range, fully-suspended electric scooter that can replace a car for many riders, that’s a pretty good deal!

Make sure you check out my full review of the EMove Cruiser electric scooter here or watch my review video of the scooter below.