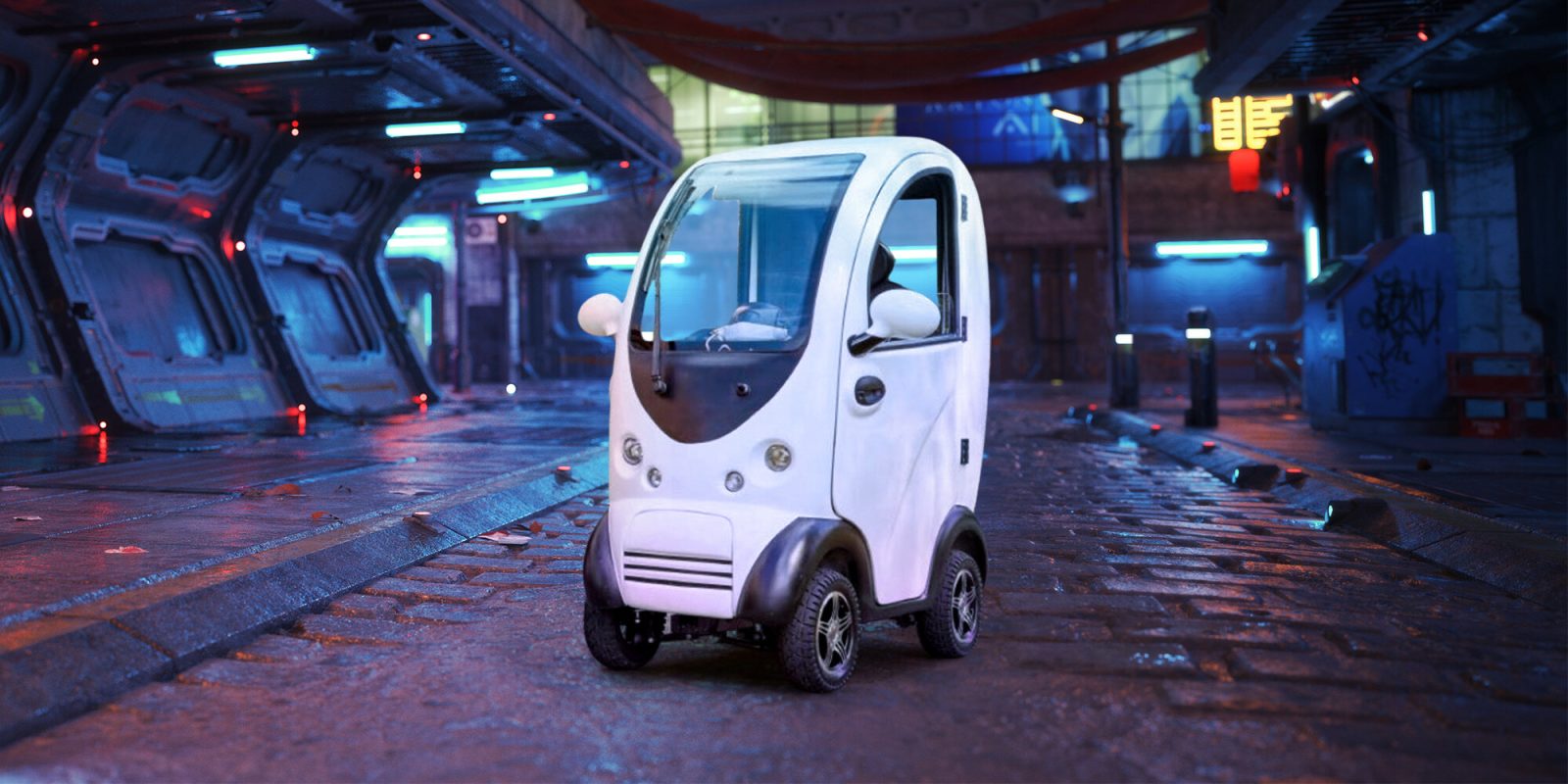 Despite mainly covering electric two-wheelers and other non-car electric vehicles, I’m still pretty pro electric car. The problem is that even though they are greener than gas cars, those 4,000 lb tanks all seem like so much more vehicle than I need for my typical urban lifestyle. Or at least until I found this tiny gem of an EV! It just may be the world’s smallest four-wheeled electric car, if you can call it that.

What you can definitely call it is the Awesomely Weird Alibaba Electric Vehicle of the Week.

I might be throwing around the term “car” a bit loosely here.

This tiny electric vehicle has four wheels and two doors, though that’s about it.

In fact, I think this rolling phone booth is about 90% door.

I’ve seen tiny electric cars before but this one just about takes the cake for pint-sized awesomeness. It’s as if someone drew a box around a person, added wheels and said “There, that’s all you need to move exactly one human and a half of a grocery bag around effectively.”

I’ve seen HotWheels cars that rivaled this little buggy for wheelbases, even if they could never match its Alibaba charm.

And it’s not just short. The little car is so narrow that the sideview mirrors are practically touching.

But what the 230 kg (507 lb) little electric runabout lacks in size, it makes up for in… well, not much. The specs are pretty muted too.

Its adorable 1,000 W (1.3 hp) motor launches our little rig up to a sprightly 40 km/h (25 mph). The designers must be pretty optimistic about the power in that little motor, considering they outfitted the car with a wheelie bar in back. I’m not sure the rear wheel drive is going to be enough to lift the nose up, but then again a moderately powerful gust of a wind might be sufficient as well.

At least we know the thing can ride all day thanks to a fairly large 60V and 32Ah battery pack with 1,920 Wh of capacity. Sure, we’ve seen electric bicycles with more battery than that, but nothing about our little single-seater minivan is excessive. That modest lead acid battery pack gets a claimed 60 km (37 miles) range. That’s an hour and a half at full speed, and trust me when I say you’re unlikely to want to spend more than 90 minutes at a time in this thing.

The seat looks plenty comfortable, don’t get me wrong. In fact it’s got a nicer seat than a lot of the other questionable Alibaba electric cars we’ve seen. But there’s something about riding around in a car that is taller than it is wide (or long) that is likely to get a bit claustrophobic.

Somehow the vendor even claims the car seats two, but that must be by counting the driver’s lap as a spare seat.

It’s easy to laugh at a tiny car like this, but then again I can actually see a use for it. It’s basically the smallest neighborhood electric vehicle (NEV) you’ve ever seen. Who needs a 6-seater GEM when you’re just headed to your local gated community’s clubhouse for the shuffleboard semi-finals? If all you need is a set of wheels and have plenty of time to leave early, this runt of an electric car could do it for you.

I wish I could report that the price is “more than fair” or “reasonable for what you get”, but I haven’t been able to shake a real price quote out of the company.

As soon as I said I’m not interested in a container load of these pygmy Teslas, they stop chatting with me. So the price remains somewhere in the $100 – $4,000 range as quoted on the sales page.

At $100 a pop, sign me up for a dozen. I’ll get one of those six-foot inflatable beach balls and start a tiny-car soccer league.

But at $4,000, I’m probably going to have to pass. I already spent nearly that much on an electric pickup truck I discovered on Alibaba and I’m about wiped out on experimental EV purchases for the moment.

But that doesn’t mean I’ll stop you from grabbing one of these geriatric hot-rod electric racers. Just don’t expect a super smooth sales experience.

While I always advise against anyone actually buying one of these Awesomely Weird Alibaba Electric Vehicles I feature each week, that doesn’t mean people always listen to me. Others have purchased these weird finds and the process can be hit or miss. Communication is key and helps to avoid misunderstandings between buyers and sellers on the world’s largest retail platform.

But if you aren’t brave (or foolish) enough to plop down your hard-earned cash on a mystery EV from halfway around the world, that’s more than fine. Please allow fools like me to curate China’s weirdest electric vehicles in a weekly column and to sometimes even put my money where my mouth is to try ordering these funny little things.

If you happen to find your own awesome or weird electric vehicle while window shopping on Alibaba, feel free to drop me a tip! You can find my contact info in my author bio below. If you find something neat enough, it might just make it into a future column!

And until next time, check out some of these other fun finds from previous weeks: