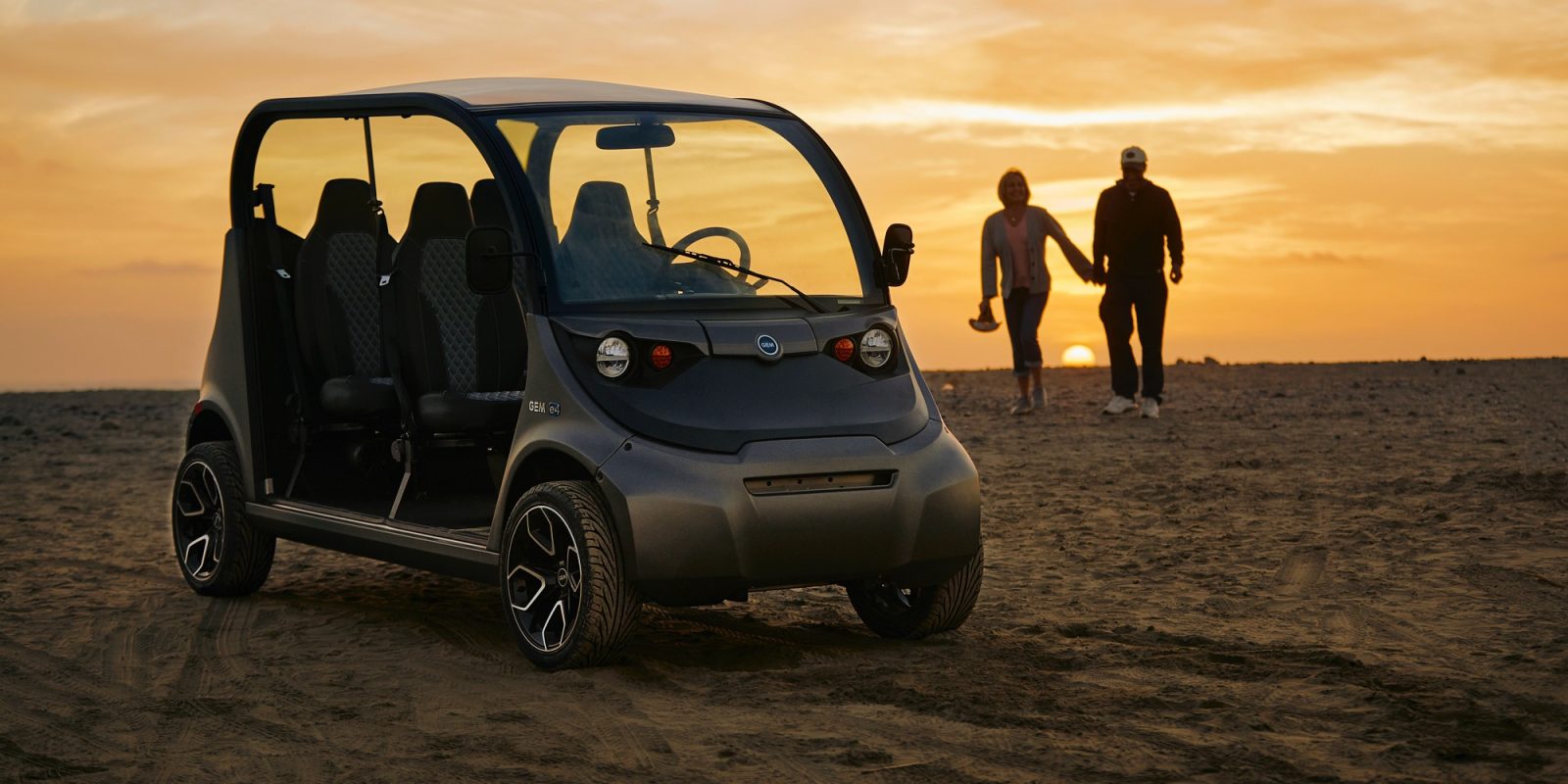 Polaris has been investing heavily lately in its electric future, and now the GEM line is getting some new love and attention.

The company just announced today that the GEM line of personal carts will be getting a wide number of upgrades to make the little EVs more comfortable and easier to use than ever.

If you’re not familiar with the GEM, it’s been around in a few generations for over 20 years.

The vehicle is legally classified as a Low Speed Vehicle (LSV), also known as a Neighborhood Electric Vehicle (NEV).

LSVs are a federally approved class of vehicle that can travel on roads posted up to 35 mph (56 km/h).

They are used in a number of different ways, from utility work to people movers and even as personal cars in communities with low speed limits.

While they have a certain golf cart vibe to them, they actually have a fairly sophisticated build quality and include safety features like forward-facing bucket seats, three-point seatbelts, full automotive indicators and headlights, automotive-grade glass, side and rearview mirrors, back-up camera, and front and rear hydraulic brakes.

The refresh to the GEM line largely consists of new features and more customization options.

A new panoramic sky roof uses “motorcycle windshield technology” to cover the entire length of the GEM. The glass is translucent smoke grey, which helps to filter the harsh sun rays while still giving a wide and clear view out the top.

A number of new fancy paint colors replace the classic white GEMs of yesteryear. There are gloss and matte versions of Sunset Red, Navy Blue, Titanium Metallic Gray, Bronson Rock, and Orange Rust, plus a gloss version of Radiant Green.

The GEM gets three new options for water-resistant upholstery in Beechwood, Avalanche Gray and Black, or Beachwood and Black.

And while you’re getting fancy tricking out your new GEM, you’ll likely want to add the option for larger blacked-out 16″ wheels that include “an aggressive tread pattern for added style.” Sign me up, baby!

And if that wasn’t enough pimping out for one LSV, you can even get new interior low-glow feature lighting using LEDs that can be switched from blue to white for “either task or ambient lighting.”

You know what the difference between ambient lighting and ambiance lighting is? Perspective. Just roll out a checkerboard picnic blanket and you’ve got yourself a date night-mobile, my friends.

All told, Polaris says that the new GEM has over 10,000 variations based on all of the customizable options. And with over 60,000 GEMs sold over the last two decades, on average, there likely aren’t more than five others in the world wearing the same thing as yours.

These carts are made-to-order in Anaheim, California, but that also means they aren’t cheap. Prices start north of $10,000 and can quickly head closer to $20,000 when you start adding lithium-ion batteries, extra rows of seats, and other options.

The new GEM refresh is just one arrow in Polaris’ growing quiver of EVs. The company recently signed an exclusive partnership deal with Zero Motorcycles to combine the two’s technology in order to create improved electric versions of several Polaris off-road vehicles. The first model getting the Zero treatment is the new electric Ranger, a side-by-side utility vehicle that we recently saw testing in the snow.