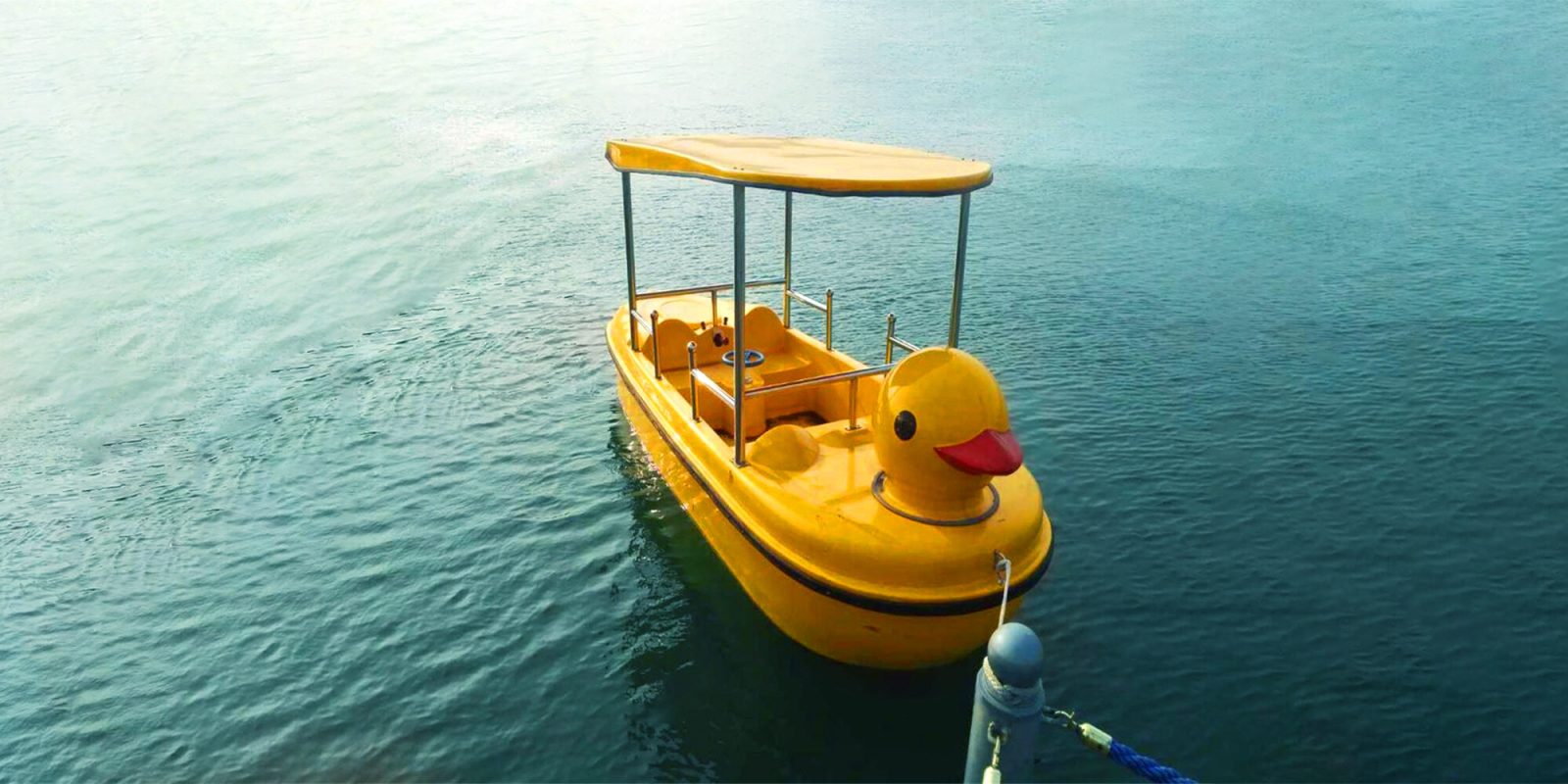 There are few things more pleasurable than a relaxing Sunday on your own boat, slowly meandering your way around the local lake or water hole. And lately the increasing number of electric boats are making that experience even more relaxing by removing the noisy and troublesome gas engines from the mix. But electric boats have often been prohibitively expensive… until now!

That’s because I’ve found the coolest way to get your affordable electric boating game on, as long as you don’t mind a slightly avian flair to your pleasure cruiser. This $1,500 duck boat isn’t your typical army-surplus amphibious tour bus – it’s an actual duck. And it checks all the boxes necessary to make it the Awesomely Weird Alibaba Electric Vehicle of the Week!

Some might call that a bug, but I think it’s a feature.

Who wouldn’t want to sail the seas on their own bright yellow bathtub toy?

There are some real features here. You’re brightly colored for safety, you’ve got seating for a “crew” of six, and you’ve even got a giant duck head on one end, just in case you forget which end of the boat is which.

The cute little sloop may be a bit unique, but therein lies its charm.

Among all the Carolina Skiffs, you’ll be the coolest duck out there.

Pack up your rod and reel for a day on the water and perhaps you’ll even sneak up on that giant snook without it realizing you’re a fisherman. You’ve heard of a Trojan horse, right? Well this Trojan duck might be the fisherman’s best friend. Nothing says “I’m one of you guys” like a 200 kg (440 lb) fiberglass duck costume.

The quiet electric motor will make you even more stealthy as you cruise up to your favorite fishing hole.

Or just use the boat for a fun afternoon on the water with the family. The small motor means the boat won’t be overly powerful, making it great for kids.

Though “small” might be generous. The motor is only rated for 300W of power, or just under one-half horsepower. (How many duckpower does that translate into? WolframAlpha, don’t fail me now!)

After checking out the video below, I was a bit surprised by just how slow the boat is. I think it might be faster to just ride an actual duck.

But then again, this is a pleasure cruiser, not a speed boat. I’m not going to be outrunning a DEA helicopter off the coast of Miami with a cabin full of cocaine. It’s more likely that I’ll be lazily floating in circles in a country pond while trying not to drunkenly stumble over the gunwale.

And for that kind of experience, the price is right at a cool $1,556, plus whatever international shipping is for a duck-shaped boat (strangely it didn’t pop up in the table I checked).

The only problem is that just like most fun toys, batteries aren’t included. They recommend a 100Ah to 200Ah battery. On the boat’s 24V system, that translates into 2.4 to 4.8 kWh of battery. Jeez, with that much capacity and the boat’s top speed of “meh”, I could just about make it from Cuba to Key West with a tailwind and a prayer.

In the worst case scenario if I did run out of battery, at least it wouldn’t take them long to find me. I’d be in the only giant rubber ducky floating out there in mother nature’s bathtub.

I must admit that even though I have absolutely no need for this boat, I still want it anyways and am fighting the urge to order one.

Just in case I’m not strong enough to resist, I better think of a good name for this cute little duck boat before I club her over the head with a bottle of champagne. I’m thinking: No ducks left to give.