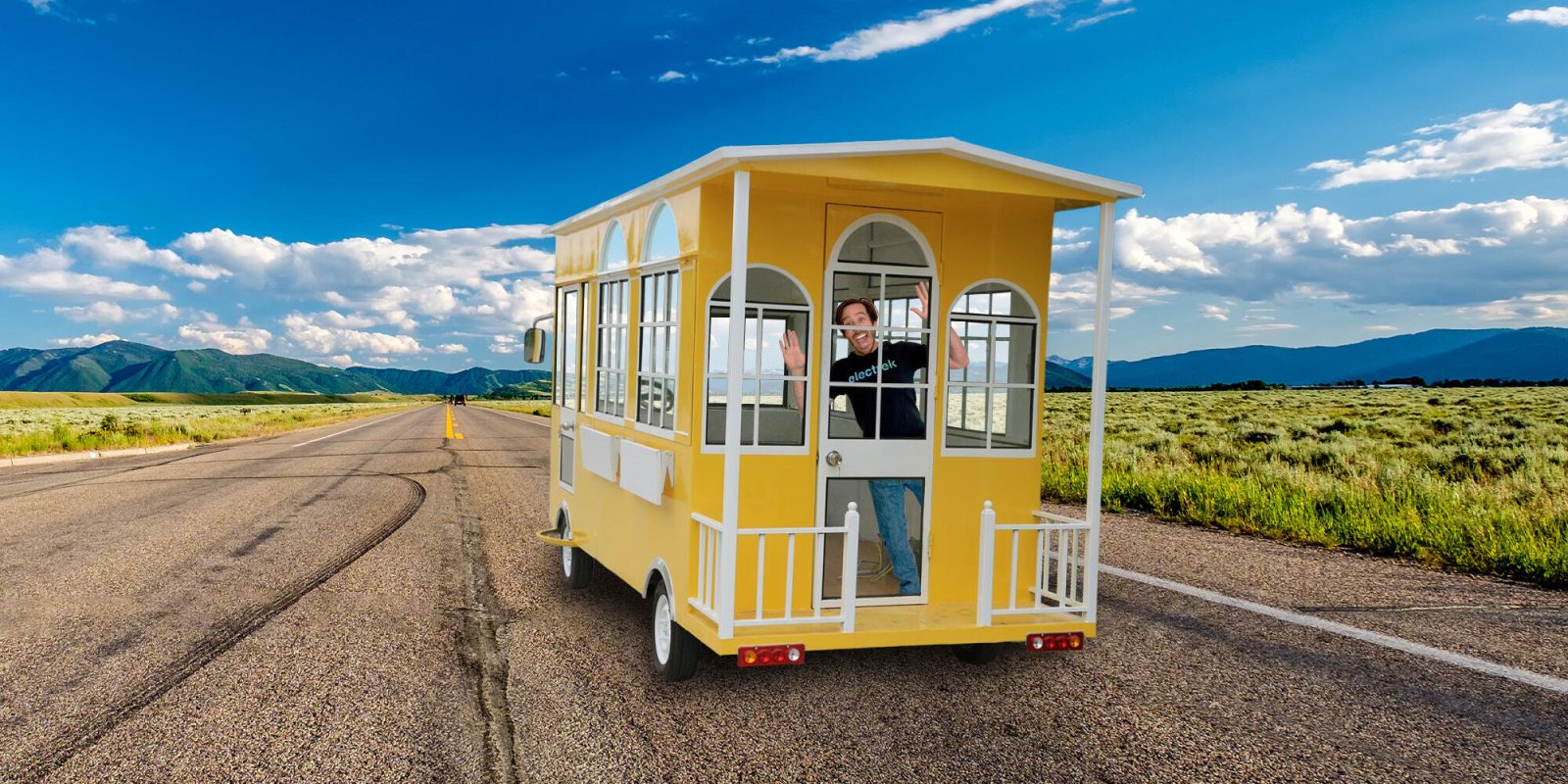 First of all, let’s get an idea of what we’re looking at here.

I’m not sure I can really call this a mobile home. It’s more of a mobile box shaped like a home.

But when it comes to being almost a house, there are some decent arguments to be made here. It’s got a pitched roof, back porch, picture windows, and even a front (side?) door. Scoring more points in the mobile home column is the fact that the doors have real doorknobs, not just car door handles.

It looks like you even get three keys, so don’t say they don’t spoil you!

When it comes to living space, we’re looking at a full 8.6 square meters (92 sq feet), meaning it’s about a quarter the size of my and my wife’s first apartment.

But just like us in our first apartment, don’t expect to live too glamorously in there. A cursory glance inside this oversized rolling dollhouse shows what appears to be an empty box. It’s an echo chamber of nothingness. Well, perhaps not nothing. There’s a steering wheel, a desk fan, and a water bottle. It’s unclear whether the water bottle is included as standard equipment or is an optional add-on. There’s also no bathroom, so don’t hit that water bottle too hard. Or if you do, you better finish it — if you catch my drift.

It’s also unclear how you actually drive the thing as there is no driver’s seat. You know how sometimes you drop something under the sink and have to fish it out with your foot? That appears to be how you work the pedals.

My advice is to bring a folding chair. You can use it as the driver’s seat, and then once you park, you can drag it out onto the back porch to relax. Two birds, one folding chair.

The decorative handrail might also be doing double duty as a safety rail if your partner decides to change addresses while you’re still enjoying the balcony view.

As far as car components, our storage unit on wheels seems essentially half-complete with headlights, taillights, and mirrors. There’s either a stud to install a wiper or the remnants of a wiper that fell off a few miles ago — I’m not quite sure on that one.

It looks like we’re rolling on four spare tires and that our little wheels get powered up by a 3,000W (4 hp) motor. A top speed of 40 km/h (25 mph) isn’t going to get us anywhere in a hurry, but it’s a heck of a lot faster than my current apartment. That thing doesn’t even move at all, so now I’m not really sure why I’m paying so much each month.

To be honest, I don’t know how it even gets up to that top speed with the aerodynamic profile of a barn door, but I assume they’ve got it worked out by now. You could probably sit on a little red wagon and draft this thing at 25 mph — it’d be sucking that much air down the road.

Through the back door of our little home on the prairie pavement, I can just make out the battery bank on the floor. They outfit it with a 60V lead acid battery system, which is a bit old school for me.

I’d rather rock a lithium-ion battery pack. You could pop in a few 12V 100Ah LiFePO4 batteries and be all set up, though five of those packs would add up to the same $2,500 purchase price of the entire house!

While you’re doing upgrades, that roof looks like it’d be the perfect place to throw a few cheap $80 solar panels, or maybe you could convince Tesla to put a solar roof up there.

Personally, I don’t think I’ll be standing in line to put down a deposit on one of these mobile houses. I’m sure it’s got some value in it – probably more so when used for its actual intended purpose, which appears to be as a food truck? And I can even see this making a really cool man-cave or she-shed on wheels. But I’m still waiting on my last Alibaba purchase (a $2,000 mini electric pickup truck that turned out to be a biiiiiit more expensive than that). So I’m going to sit this one out, if that’s alright with you guys.

Not that you should let that stop you from purchasing the electric mobile home of your dreams. I’ll be the first to show up with a housewarming gift. I’ve got a great set of fuzzy dice picked out.