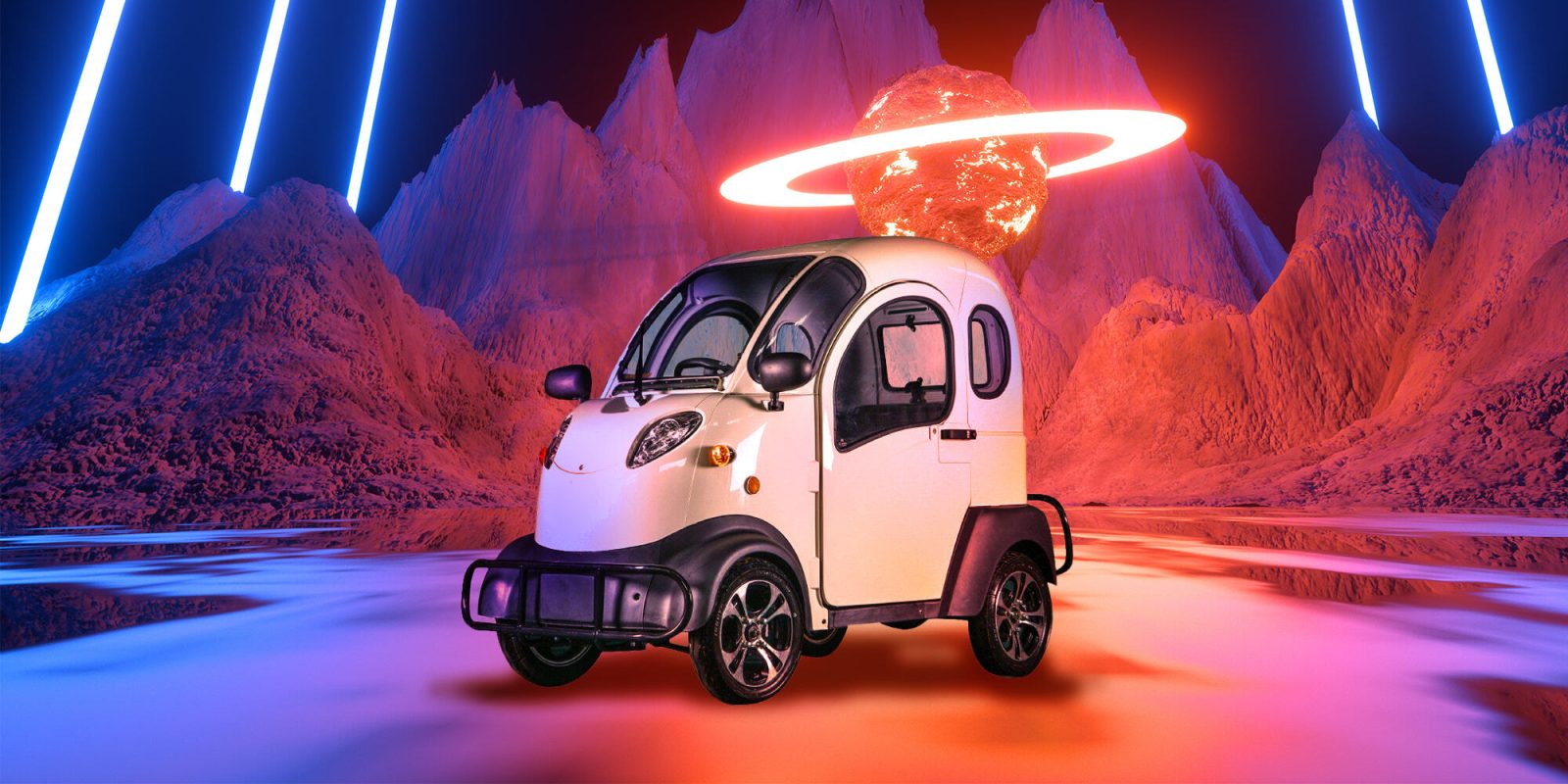 The Chinese are the undisputed leaders in the tiny electric car industry, but even top dogs can have an off day. I’m guessing the factory manager wasn’t walking the floor when this thing rolled off the line. It may have a face only a mother could love, but that has also earned it a coveted spot as the Awesomely Weird Alibaba Electric Vehicle of the Week!

I don’t really know what to call this thing.

The model number listed on the Alibaba page is K5M-2500 and the brand name is listed as “electricKar.”

Neither seem to do this thing justice.

Despite it being undeniably weird at first glance, there’s something intriguing about this little guy.

First of all, it’s a two-seater. It may look like a personal car for one, but there’s a jump seat behind the driver’s seat. I’m not sure if that qualifies this thing as a coupe, but I’ll give it the benefit of the doubt.

Next, check out that horse logo as the hood ornament. With a quick-enough glance at the candy apple red version, you’d almost mistake this thing for a pint-sized Ferrari that didn’t get enough nutrients in the womb. Almost.

This electric tiny car is limited to a sprightly 25 mph (40 km/h), but that’s probably a safety feature. It’s so narrow that it looks like the driver could put an elbow out of each window. I’m not sure I’d want to take a corner at anything faster than 25 mph in a car this narrow. Though on the plus side, the next time you get stuck in traffic, you can just slice right down the middle of the road between lanes.

The tiny size and low weight (just 255 kg or 560 lb!) means that the factory didn’t feel the need to spec it with a very powerful motor. A puny 800W of copper and magnets powers this grownup kid’s toy.

That’s not much, especially considering half the electric bicycles I ride put out more power. Line it up against a few other odd little Alibaba electric cars and it wouldn’t even win the world’s most anti-climatic drag race. But with an electric car this weird cool-looking, you don’t want to go too fast anyway. You want to give folks time to watch you drive by, and this tiny motor ensures plenty of gawking time.

You’ll be able to gawk right back at them, choosing to peer through any of the three windshields inexplicably provided on the car. In fact, I imagine it feels a bit more like looking out of a submarine than a typical car – you’re basically surrounded by portholes.

This car literally has eight windows, and I’m pretty sure you could touch them all with your head from the driver’s seat. The fact that the car doesn’t come with seatbelts means you might even do it, too!

The 72V and 38Ah Li-ion battery is larger than I would have expected, offering 2.7 kWh of capacity. That’s just over half the capacity of my electric scooter. But just like my nephew’s kindergarten graduation, I didn’t come into this with high expectations, and thus I was pleasantly surprised.

While just over 30 miles of range doesn’t sound like much, who honestly expects to drive that far in one of these? This type of car is for embarrassing your kid when dropping him or her off at school, and that’s about it.

For a mere $2,100, I almost kind of want to risk it and get one of these just to see if it’s as awesomely weird on the inside as it is on the outside.

But two months and several thousand dollars later, I’m still waiting for the last Alibaba electric vehicle I purchased to arrive, so I think I’ll sit this one out.

And I’m not recommending anyone else jump on this opportunity, either.

But if someone does decide to give it a go, make sure to hit me up! We’ll take it for a cruise and I’ll be happy to ride shotgun… err, tail turret?