Awesomely Weird Alibaba EV of the Week: $1,000 for a 5-seater electric boat 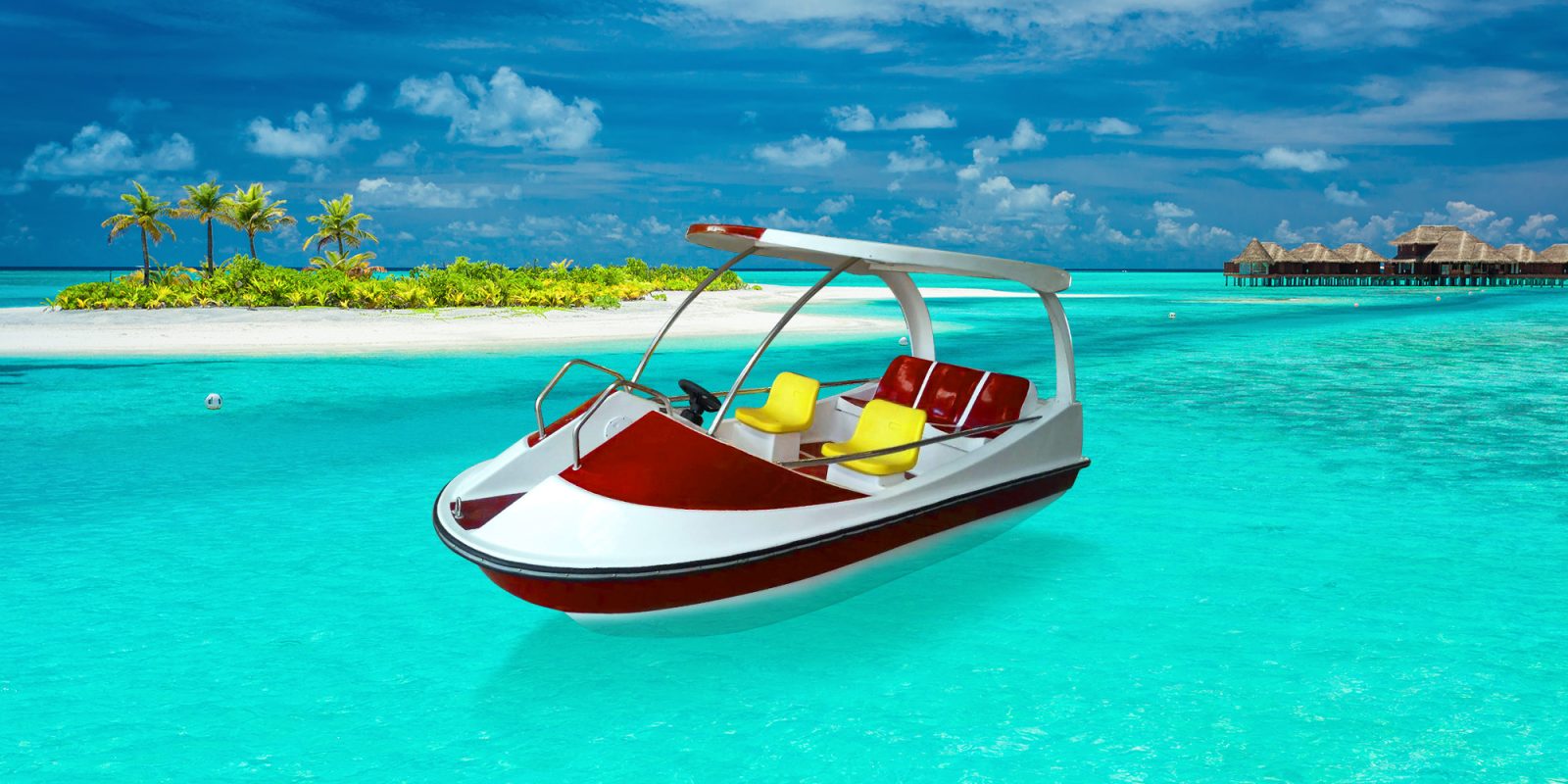 Oh buoy, do I have a good one for you all this week! Who’s ready to set sail with the whole family on their very own electric boat for the cool price of just $1,000?! Well, you’re in luck, because that’s exactly what I’ve got on deck for you in this week’s installment of the Awesomely Weird Alibaba EV of the Week series!

While past entries in the series have featured such landlubbing vehicles as a $1,700 electric Jeep or the weirdest $4,800 electric RV you’ve ever seen, this week we’re mustering our sea legs and pushing off on a nautically themed voyage of the weirdest little electric corner of the internet: Alibaba’s electric vehicle catalog.

Ahoy! Welcome aboard, matey! Gather round the bridge and lend an ear while Captain Micah shares his latest bounty from trawling the depths of Alibaba.

This gorgeous watercraft, which is sure to be making waves in the electric boating industry any day now, is a 14-footer pleasure cruiser with a fiberglass hull and taffrails for days.

She might not be the peppiest sloop in the bay with just a 500W inboard electric motor under her stern. But that’s enough power to ease this ol’ girl up to a sprightly 8-12 km/h, or what Google tells me is a spirited 6.5 knots. Perfect, like I needed even more unit systems to mix around in here.

At just 1.5 meters (5 feet) wide, this bucket isn’t exactly broad in the beam, meaning you won’t have to give a wide berth in this nimble navigator.

Though with five seats packed in there, it will surely be close quarters for you and your crew. As any third child will know, the middle seat is even less glamorous than it looks.

And while she may not be full to the gunwales with features, you’ll find this handsome vessel comes with the bare necessities including a key-switch, battery readout, steering wheel, and throttle all mounted midship.

Unless you’re already three sheets to the wind, this electric boat’s straightforward controls couldn’t be simpler to operate.

For just $1,000, there’s hardly a cheaper way to get your feet wet and learn the ropes on your own electric boat. Consider this a shot across the bow of all those prohibitively expensive electric boats just coming to market.

At this price I’m ready to sell my electric scooter, start studying my old copy of The Ashley Book of Knots, and begin my new life on the high seas!

However, not everything is smooth sailing. Just like a shady skipper smuggling undersize fish, there’s a small catch hidden here.

This little dinghy runs on 12 volts and the manufacturer recommends a pair of 200Ah packs. You’ll have to reel them in locally somewhere once you receive the boat. But don’t worry, I’ve scouted ahead and found just the marine batteries referenced by the manufacturer on Amazon for $369. The downside is that those lead acid packs are heavier than a stockless anchor in an oyster reef.

If it were me, I’d spring a bit more for a lighter lithium upgrade. Amazon has 12V 200Ah LiFePO4 marine boat batteries for $849, or you could pick up the equivalent on AliExpress for $676.

At around twice the price, lithium iron phosphate batteries will cost you a few extra Gold Galleons. But don’t keel over just yet! You’ll be happy to have plundered your booty when the batteries last five times as long as lead acid.

With just shy of 5 kWh of battery beneath the rear seats, our silent electric sailors should expect around nine hours of run time. That should be plenty for most day cruises without leaving you high and dry. But adding a few hundred watts of cheap solar panels to the rigid awning should give you enough charge during the day to extend your voyage past dusk. In fact, you might even be able to get enough charge on your off days to arrive at the dock with a full battery just from solar charging!

Anyone who has ever spent some time at a marine gas station will know you want to do everything you can to avoid those places!

Now, if you’re like me and find yourself ready to plunk down a cool grand on your own electric schooner… then that’s great because I’m actually going to need eight friends to help me group buy this thing.

You see, the manufacturer could only quote me the shipping price for a 40′ container, of which he helpfully informed me that he could fit nine boats inside. So for just an extra $700 a piece, the nine of us can start our own silent armada on the high seas!

But if five seats aren’t enough for you, the manufacturer also has a nice-looking six-to-eight-seater with a more powerful 800W motor, but for a higher $1,480 price.

They sent me a video showing it in action, which you can see below:

Let’s get real – should you really buy one?

As usual, the Awesomely Weird Alibaba Electric Vehicle of the Week series is more of a window-shopping escapade than a serious search for my next EV. I’ve made plenty of purchases on Alibaba and its retail-oriented sister site AliExpress, but purchasing direct from China may not be for everyone.

The sites hold your money in escrow and the process is reasonably safe, but it still requires a strong stomach for risk. You’ll want to be sure you communicate clearly with vendors to ensure you understand exactly what you’re getting. And be prepared for unexpected charges and fees to pop up along the way.

By the time your little boat gets loaded on a bigger boat and shipped by ship across the sea, there are bound to be unexpected forwarder charges and customs fees you’ll be forced to pay along the way.

But since many of today’s electric boats cost several hundred thousand dollars, a few grand on a fun little bucket like this could get you sailing on electrons for much, much less.

And even if you aren’t going to buy your own Chinese electric boat today, you can still meet me down in the comments section below and lay your best boat puns on me!